Central Queensland (CQ) grain growers are being encouraged to assess the full range of options available to control Helicoverpa armigera in pulse crops this season as part of a critical industry-wide push to preserve the efficacy of insecticides.

While Helicoverpa is found across Australia, the pest is more common in the northern and coastal regions of the eastern States, particularly in warmer areas, where insecticide use over a longer growing season creates a greater risk for resistance development.

An industry-wide surveillance program had indicated levels of resistance to indoxacarb (Steward®) in Helicoverpa had increased in areas of Central and Northern Queensland.

The program, an investment initiative with Cotton Research and Development Corporation (CRDC), the Grains Research and Development Corporation (GRDC) and the New South Wales Department of Primary Industries (DPI) has found annual frequencies of indoxacarb resistance over the past five years have been significantly higher in the CQ region compared with the industry average. 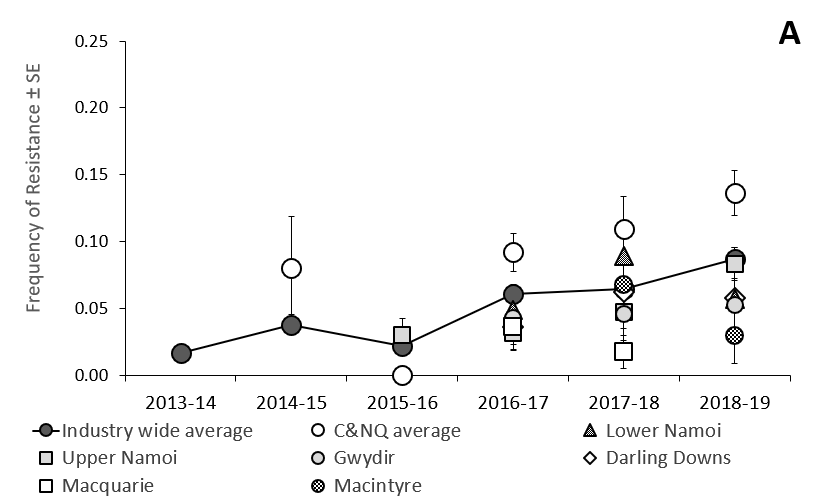 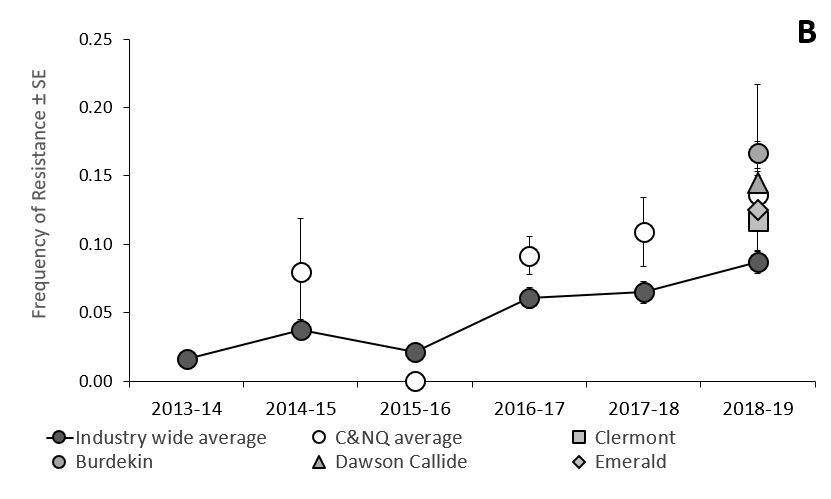 Lead researcher on the program, Dr Lisa Bird from the NSW DPI said resistance surveillance had found average indoxacarb resistance in central and northern Queensland was 2.4-fold higher than levels recorded in southern Queensland and NSW during 2018-19.

Dr Bird explains that resistance monitoring utilizes an F2 screening method which involves testing the grandchildren of moths collected from field populations. The major advantage of this method is that it increases capacity to pre-emptively detect early-stage resistance. In other words, F2 screening provides an effective early warning system for resistance and the opportunity to proactively implement mitigation tactics to minimise the risk of field failures.

“Our results show that while industry-wide indoxacarb resistance was similar in 2016–17 (6.1%) and 2017-18 (6.4%), latest results from the 2018-19 season indicate that 8.7% of the H. armigera population currently carry genes for indoxacarb resistance, which is a significant increase from the previous two seasons”.

Levels of indoxacarb resistance have generally been lower than the industry average in cropping regions of southern Qld and NSW. In 2018-19 the southern average was 5.6% (Figure 1A).

She said this difference was likely associated with factors unique to more northerly grains production regions like a longer growing season, which supports a higher number of insect generations per year compared with southern regions resulting in more insecticide applications and increased selection pressure in northern populations of H. armigera.

Diapause is a period of suspended development that insects undergo when faced with unfavourable environmental conditions. In eastern Australia H. armigera typically enters a winter diapause in growing areas of NSW and southern Qld. Recent research has found evidence that diapause in indoxacarb-resistant H. armigera incurs a fitness penalty which means they are less likely to emerge from diapause in spring. However, in central and northern Queensland, H. armigera do not enter diapause, so the frequency of resistant individuals in the population can quickly increase under selection.

“From a resistance risk perspective, the adoption of resistance management tactics is critical for reducing selection pressure and maintaining the efficacy of key insecticides, particularly in central and northern Queensland growing regions where ecological factors are more likely to favour rapid resistance development,” Dr Bird said.

What can growers do to preserve insecticides?

Department of Agriculture and Fisheries (DAF) senior entomologist Melina Miles said the expansion of the pulse industry, and the efficacy of newer products, has significantly increased selection pressure on key insecticides to control Helicoverpa.

To slow the rate and risk of insecticide resistance, Dr Miles said it was critical growers and farm advisers  were well informed about the risks when selecting insecticides for Helicoverpa management heading into the key management time from mid-July.

“From mid-July onwards, dependent on the weather, Helicoverpa tend to become active in Central Queensland as crops start flowering and setting pods,” she said.

“So now is the time for growers and farm advisers to assess the full range of options available for Helicoverpa control in chickpeas and planning particularly what product will be used if a second spray is required.”

What is best practice?

Growers and agronomists are being encouraged to use the Helicoverpa resistance management strategy (RMS) that has been developed specifically for the Central Queensland cropping region.

Dr Bird said the RMS developed was centred on management of Helicoverpa in the key pulse crops, chickpeas and mungbeans, in the northern grains region.

“Insecticide use in these crops is likely to have the greatest impact on the selection for resistance in H. armigera populations in the foreseeable future, but the principles of the RMS can be applied to other grain crops,” Dr Bird said.

“If growers follow the RMS economic thresholds, comply with label instructions for applying insecticide and avoid prophylactic sprays, they will minimise the development of resistance and maintain effective insecticide control of H. armigera into the future.”

Central Queensland is one of two regions which have individual RMSs, each designed to highlight the most effective products available when they are of greatest benefit, whilst minimising the risk of overuse.

“The RMS provides windows-based recommendations common to southern Queensland, central and northern NSW because H. armigera moths are highly mobile and have the capacity to move between these regions,” Dr Miles said.

“This mobility potentially increases the risk of further exposing populations of H. armigera previously selected for resistance in other areas.”

H. armigera has a track record for developing resistance in response to selection pressure from insecticides. The risk of spray failures is high for pyrethroids and carbamates due to historical resistance to these products.

“The risk of indoxacarb resistance development is elevated in some areas of Central and Northern Queensland, but is still low for chlorantraniliprole (Altacor®) and emamectin benzoate (Affirm®), based on current resistance frequency data,” Dr Bird said.

“However, it is highly likely that resistance will increase rapidly due to selection pressure if there is over-reliance on these products in pulses.”

“Chickpeas and mungbeans are currently, and for the foreseeable future, the most valuable grains crops influenced by the RMS and therefore the strategy is primarily focused on insecticide Modes of Action (MoA) rotation in these systems,” Dr Bird said.

The strategy is built around product windows for Altacor® (chlorantraniliprole) and Steward® (indoxacarb). Dr Bird explains that although Altacor® resistance is currently low, this product is at risk from high levels of use in pulses. Steward® is at risk due to genetic factors (high level genetic dominance and metabolic mechanism) and pre-existing levels of resistance, particularly in central and northern Queensland.

The threat of resistance is further increased because the use of indoxacarb in pulses is expected to increase as generic products come on to the market which will further increase selection pressure.

“In future, the RMS may include windows for other products such as Affirm® (emamectin benzoate), Success Neo® (spinetoram), and other new products that come to market if their use patterns necessitate management.”

To avoid repeated use of either Steward® or Altacor® within the use window, Dr Miles said the RMS limited the number of allowable applications to one per crop, which in some instances may differ from the label registration.

The RMS recommendations were developed in consultation with the chemical companies and the RMS has been endorsed by CropLife Australia.

Pulse growers should discuss their insecticide options with their adviser. If you want to discuss the RMS, its implementation and options, you can contact Melina Miles at DAF on melina.miles@daf.qld.gov.au.