In the spring-summer of 2016-17, the northern grains region experienced a major outbreak of Rutherglen bug (RGB, Nysius vinitor).

Until 2007, RGB was not considered a major pest of sorghum although it had long been recognised as a major pest of sunflowers. It is thought that RGB were controlled in sorghum when crops were treated for midge. However, in 2007, extremely high infestations of RGB in early sorghum crops resulted in damage; heads with low percentage of seed set. In 2007-08, QDAF entomologists undertook research to understand the impact of RGB in sorghum.

In 2016-17, RGB populations were extremely high, and they persisted in crops at high levels for many weeks. At the same time, heatwave conditions were affecting sorghum crops. In combination, the RGB and the heat resulted in many sorghum crops with low grain yields and poor grain quality. In this paper, we describe RGB damage, so it can be distinguished from heat damage.

As if this wasn’t enough, control of RGB proved to be a challenge for some. Questions were asked about the efficacy of different insecticide products and the possibility that RGB were resistant to some products. In response to the challenges with effective control of RGB in 2016-17, QDAF entomologists screened a large number of insecticides to evaluate both contact and residual efficacy. The results of this work, as it relates to RGB control in sorghum, are presented here.

Rutherglen bug females need to feed on developing seed before they can start to produce eggs. Consequently, damage to sorghum at the susceptible crop stages (flowering – soft dough) is caused by adults only. Nymphs are generally present in sorghum crops as the grain starts to colour.

Adult feeding results in seed that does not fill, or seed that is discoloured (dark red) with black feeding spots (Figure 1A and B). Affected seed is typically not ‘beaked’ as occurs with head stress (Figure 1C). 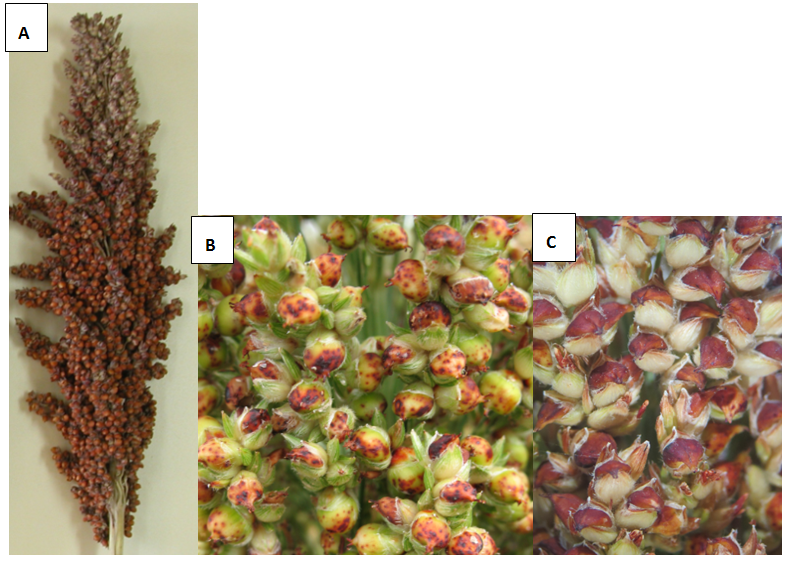 Figure 1. Typical RGB damage to sorghum (A) poor seed set at the top of the panicle similar in appearance to midge damage, (B) reddening and spotting on the seed. (C) heat-damaged sorghum seed, note the reddening, but absence of black feeding marks.

Based on trial work conducted in 2007-08, the proposed economic thresholds for RGB in sorghum are presented in Table 1. The thresholds reflect the susceptibility of the grain whilst filling and the lack of impact once the grain is filled and reaches physiological maturity. These results show that treating large populations of RGB in sorghum close to harvest has no benefit in terms of yield, but may reduce the likelihood of problems with large populations at harvest (blockages, moisture and live insect contamination).

Screening trials (laboratory based Potter Tower bioassay) showed that alphacypermethrin*, deltamethrin* and dimethoate* were highly effective in killing RGB when sprayed directly onto adults. It should be noted that these (*) products are currently registered for control of RGB in other crops, but not in sorghum.

However, when RGB populations are high it is unlikely that commercial insecticide applications will get good direct contact on all RGB individuals. This is probably more problematic when large populations of adults and nymphs are targeted. Therefore, the residual efficacy of the insecticides becomes important (how toxic they are when RGB make contact with dry residues on leaves/stems/heads). Again the same suite of products was tested in a lab test with RGB introduced to leaves that had been treated with each of the products at 3 and 7 days after spraying. The number of RGB adults alive/dead was assessed after 24 hours of exposure to the treated leaves. Results showed the residual efficacy of the treatments varies, with rapid deterioration of alphacypermethrin after 3 days, and further loss of efficacy of alphacypermethrin and low rate dimethoate after 7 days. These results support the anecdotal observations of many agronomists and growers in the field this past summer.

Helicoverpa armigera activity was extremely high in spring of 2016, and in combination with late winter cereal crops in much of the northern region, we saw an outbreak in wheat and barley. It is considered unlikely that such an outbreak will occur again in 2017 as the winter cereal plant was not delayed. Pheromone traps, which detected very high moth activity through September-November 2016, will be run again in 2017 and will provide an indication of the likely risk of an outbreak occurring in spring crops.

There were a number of challenges with this outbreak: i) H. armigera has high levels of resistance to synthetic pyrethroids and carbamates, and many applications of these products did not effectively control the infestations, ii) the registered insecticide options were limited to older chemistry to which H. armigera has resistance, iii) there were shortages of insecticides and iv) many infestations were not detected until larvae were medium – large and visible on the heads. Medium-large larvae are damaging, and harder to kill than smaller larvae.

However, we gained some valuable knowledge and experience from this outbreak. As the outbreak was unprecedented, there were no guidelines for how much loss the larvae may cause. In response, QDAF Entomology undertook a trial at St George, Qld, to assess the impact of the larvae on wheat and evaluate the efficacy of nucleopolyhedrovirus (NPV) products. Unlike armyworm, which lop heads, helicoverpa larvae grazed on leaves and medium larvae moved up onto the heads and grazed on the filling grain.

Visual inspection of crops tended to find larger larvae, and even beatsheet sampling was severely underestimating the number of small larvae present in the canopy (Figure 2).  In the event of high H. armigera activity in spring, the recommendation is to check wheat and barley crops (vegetative, in head), looking for evidence of leaf feeding – in the same way that you would do for armyworm. Figure 2. Beatsheet sampling was detecting less than 10% of the small helicoverpa larvae
in the wheat crop canopy (compared with an absolute sample).
Medium – large larvae were more reliably sampled (80%).

Early detection of infestations provides the opportunity to use NPV, which is effective on small larvae, but less effective on medium larvae. Be sure you can distinguish armyworm and helicoverpa as NPV is not effective on armyworm.

Trial results were affected by our ability to effectively sample the crop to accurately estimate the larval density. As a best bet, we are suggesting the following action levels in the event of another outbreak of helicoverpa in winter cereals. The table is based on the consumption rate of helicoverpa in sorghum (24kg grain loss per larva per square metre) (Table 2), and expressed in terms of the likely crop loss per hectare for a given helicoverpa density and grain price. The shaded values show the range of insecticide costs to treat helicoverpa, and indicate the helicoverpa density at which it becomes economically viable (breakeven) to treat the crop. With this scenario, a breakeven threshold for helicoverpa in wheat is 3 to 5 larvae/square metre (depending on control costs).

Although there is some anecdotal evidence that helicoverpa was more damaging in barley than in wheat, we have no empirical data to support this observation so are treating the two crops as equal.

More research will be undertaken on damage potential, effective sampling and control options when the opportunity arises.

We are grateful to a number of growers and agronomists for their assistance in locating trial sites and generously allowing trial work to be conducted. In relation to the helicoverpa and RGB research, we acknowledge the support of Jamie Street, Phil Rigg and Ian Todd and Tony Anderson.