Mixed farming systems in NSW including dual-purpose grazing crops have a long history. In recent years dual-purpose cropping systems have attracted more consideration because of greater profitability and sustainability.

Dual-purpose grazing crops give growers an opportunity to produce additional forage in key periods of the year when pasture systems might not be able to meet livestock requirements. They can be substituted for grain-only crops or, in more intensive livestock operations, for forage-only crop types. Selecting the right crop type, variety and then managing them properly can boost returns across both the livestock and grain production units in the farm business. The most common crops used in mixed farming and dual-purpose cropping are cereals. A jointly funded project between the NSW Department of Primary Industries (NSW DPI) and the Grains Research and Development Corporation (GRDC) has been evaluating new cereal varieties for suitability as dual-purpose types across NSW for the past four years. This paper presents some of the results of this project.

Key measurements recorded at all sites included dry matter (DM) production through the season at key periods – mid tillering and then before stem elongation i.e. growth stage (GS)31 on the Zadoks scale (Zadoks et al. 1974). The experiments are then grazed by livestock following DM measurement and allowed to recover for either further DM assessment or carried through to grain production. Growth stages were also recorded for all varieties when DM measurements were taken. Grain yield and the grain quality parameters such as grain protein, screenings, grain size and test weight were also measured at harvest.

At Wagga Wagga, the core research site, as well as measuring variety performance, also assessed the influence of sowing time on DM production by varieties, and the time of flowering response by varieties of wheat and triticale. Additional plant measurements such as flowering time, number of tillers and leaf area on a core group of varieties were recorded at the Wagga Wagga site to better understand how the different varieties accumulate DM and then recover for grain production.

The results discussed in this paper are from the 2016 and 2017 seasons. The 2016 season was one of above-average rainfall compared with 2017. 2017 was dominated by below-average rainfall through winter and early spring (Table 1), with seasonally late frosts throughout NSW. The growing season rainfall (April–November) for the sites in 2016 was 24–75% above the long-term average (LTA) for the sites, whilst 2017 was 9–68% below LTA. When viewing the results, the distribution and amount of rainfall needs to be considered, as this significantly affected the early forage production and then the opportunity for varieties to recover and produce grain.

Table 1.a and 1.b Monthly rainfall (mm) for trial sites in NSW for 2016, 2017 and the long-term average (LTA; mm) rainfall for the closest Bureau of Meteorology weather station.

In recent years breeding companies have increased investment in evaluating and releasing cereal varieties that are potentially suitable for grazing and grain production. The newer releases now offer growers a wider choice of maturity compared with EGA Wedgetail, which has been the industry benchmark for over a decade. These newer varieties not only offer differences in maturity and flowering time, grain quality and disease tolerance, they have different lengths of vegetative and reproductive phases, which allows growers to more closely match their local growing conditions to maximise forage production and grain yield.

The project evaluated 48 wheat, triticale and barley entries in 2016 and 36 in 2017, of which over half were new or late stage breeding lines from various companies across Australia.

In this paper, only the dry matter and grain yield results are presented; the full seasonal report for 2016 is available on the NSW DPI website and includes grain quality for the wheat, triticale and barley lines, dual-purpose oat evaluation and a brief economic comparison of the varieties at selected sites.

When comparing individual varieties, not only look at the difference in dry matter and grain yield, but also the stability of rank across the various trials as an indicator of reliable performance.

There are significant difference between early dry matter production by varieties (Tables 2 and 3), with the slower winter types being less vigorous compared with the fast–medium winter types and the mid-season spring types. These differences were not as significant for the second dry matter reading following grazing (Tables 4 and 5). The impact of grazing on a variety’s ability to recover is also shown in Tables 4 and 5. The shorter season varieties such as Tuckerbox and EGA Gregory which had high initial dry matter production, showed poor dry matter production at the second measurement as the plants were damaged (loss of growing points) compared with the more prostrate later developing varieties.

Grain yield recovery (Tables 6 and 7) was driven in both seasons by rainfall following grazing, with the later-maturing varieties taking advantage of the wet spring in 2016. In 2017 it was combination of the late rain and frosts that affected a variety’s ability to perform. Varieties in 2017 that were less developed at the time of the frost events avoided damage and also matured later, so were able to take advantage of the rain in October and early November.

Recently released and evaluated lines include:

Table 2. Dry matter (DM1) (kg/ha) for wheat, triticale and barley varieties across NSW in 2016. Each varieties rank in the respective trial is shown, 2016. (Note: only released varieties are reported).

Table 3. Dry matter (DM1) (kg/ha) for wheat, triticale and barley varieties across NSW in 2017. Each varieties rank in the respective trial is shown, 2017. (Note: only released varieties are reported).

Table 4. Dry matter (DM2) (kg/ha) for wheat, triticale and barley varieties across NSW in 2016. Each varieties rank in the respective trial is shown, 2016. (Note: only released varieties are reported).

Table 5. Dry matter (DM2) (kg/ha) for wheat, triticale and barley varieties across NSW in 2017. Each varieties rank in the respective trial is shown, 2017. (Note: only released varieties are reported).

Table 6. Grain yield (GY) (kg/ha) for wheat, triticale and barley varieties across NSW in 2016. Each varieties rank in the respective trial is shown, 2016. (Note: only released varieties are reported).

Table 7. Grain yield (GY) (kg/ha) for wheat, triticale and barley varieties across NSW in 2017. Each varieties rank in the respective trial is shown, 2017. (Note: only released varieties are reported).

Crop flowering time plays an important role in a cereal variety’s suitability for use as a dual purpose crop, for grazing and grain recovery (Harrison et al., 2015). The balance between sowing early for adequate forage production and the need to delay reproductive development to avoid physical damage to the plant (grazing damage), have it flower in a period that avoids frost damage and heat (high temperatures >30°C) at grain filling can be challenging.

The main mechanisms used in dual purpose varieties are either a vernalisation requirement or a photoperiod response to delay the shift from the vegetative phase to reproductive development. These are controlled by the presence of vernalisation (Vrn) genes or photoperiod (Ppd) genes, or a combination of both.  A series of flowering-time experiments were run at Wagga Wagga to help characterise a variety’s flowering time response in relation to EGA Wedgetail the industry benchmark.

Table 8. The number of days to flowering for wheat varieties sown at Wagga Wagga over four years (2014–2017).

When matching a variety’s flowering time with the preferred flowering window in a region, consider the delay in flowering caused by grazing. The length of this delay varies depending on when the last grazing occurred and the amount of residual plant biomass left.  In experiments in Wagga Wagga in 2016 (Figure 1) and in 2017 defoliation (mechanical grazing) of EGA Wedgetail through the season, before GS31 delayed flowering by nine and four days respectively compared with an ungrazed treatment. 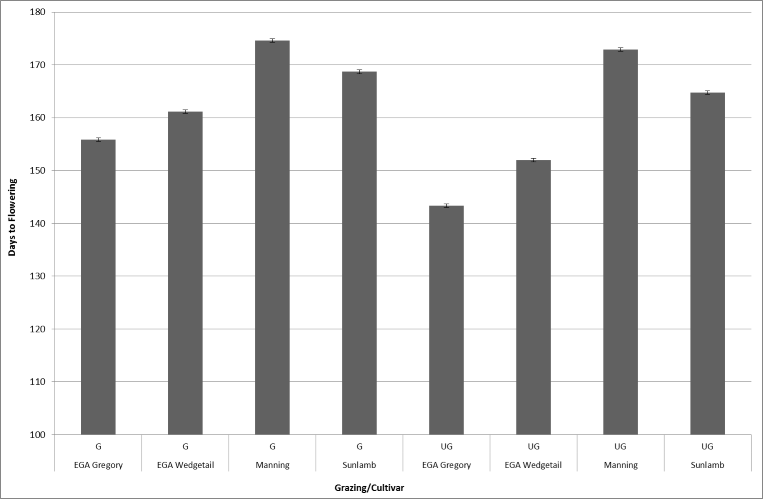 Varieties differ in forage production and grain yield recovery across the different growing environments in NSW. These differences are influenced by a variety’s growth and development phases, which are driven by the different combinations of vernalisation and photoperiod genes each variety has. Matching flowering time to the growing environment is important in dual-purpose varieties to maximise grain recovery. The newly released varieties with their differences in flowering time provide greater opportunity to match a dual-purpose variety to the different growing regions of NSW, maximising grain yield recovery.

The research undertaken as part of this project is made possible by the significant contributions of growers through both trial cooperation and the support of the GRDC. The authors would like to thank them for their continued support.

This research was co-funded by NSW DPI and GRDC under project DAN00184: ‘Evaluation and agronomic management of dual-purpose cereal varieties for NSW mixed farming systems’.

Sincere thank you to the project staff Jennifer Pumpa, Philip Armstrong, Peter Roberts and Ryan Potts for technical assistance in managing the field trials and the grower co-operators across NSW for hosting the on property trials.