Windrowing is a widely adopted harvest management practice of canola (Brassica napus L) in Australia. Its timing has traditionally been based on the seed colour change of seeds taken from pods (siliques) in the middle third of the primary stem (primary racemes). Current industry guidelines based on research undertaken in the 1980s and early 1990s recommend that canola is ready to windrow when 40–60% of seeds on the primary stem change colour from green to red, brown or black (Hocking and Mason, 1993). Over the past decade however, with the introduction of hybrid varieties, improvements in germplasm and developments in farming practices and machinery, there has been increased discussion about what is considered the optimum windrow timing and how best to determine seed colour change (Street, 2014).

The main issues of concern relate to the proportion of yield contained on the branches (secondary racemes) versus the primary stem and the effect of the differential rate of seed maturity on yield and seed quality parameters. This is further accentuated when you consider that canola seeds mature progressively up the primary stem and from the lower branches to the upper branches, with changes in seed colour indicative of declining metabolic activity and increasing seed maturity (Hertel, 2012). Based on these observations, there is an obvious need to consider in detail the partitioning of yield (stem vs. branches) and rate of seed development when looking at recommendations around seed colour change and optimum windrow timing, particularly in the hotter finishing environments of northern NSW (Hertel 2013).

In 2015, research commenced as a component of the GRDC co-funded ‘Optimised Canola Profitability’ project (CSP00187) to examine the relationship between seed colour change, seed yield and quality parameters. The objective was to assist growers to make more informed decisions around canola harvest management in northern NSW and potentially across Australia. Preliminary results outlined, looking at the partitioning of seed from pods on the primary stem and branches of two hybrid canola varieties, that seed colour change occurred later on branches compared to stems (Graham et al. 2016). Importantly, it was observed that ≥ 70% of total seed yield was coming from the branches with this percentage increasing with decreasing plant density (Figure 1). The results indicated that by relying solely on the primary stem to estimate seed colour change  and hence windrow timing, that overall seed development is being underestimated, potentially adversely affecting overall yield and quality parameters.

Based on these preliminary findings a comprehensive set of experiments were conducted across a range of environments in the northern grains region of NSW in 2016 and 2017. Findings from these experiments are reported in this paper. 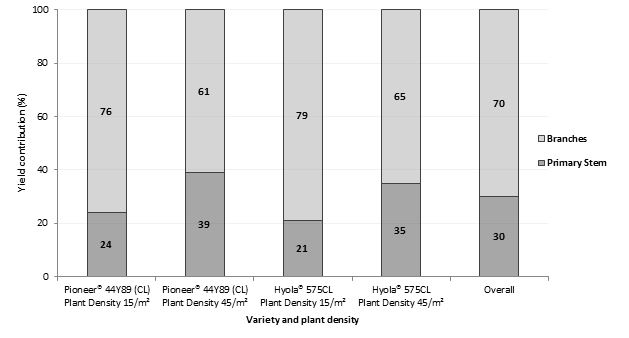 Experiments were sown on 6 May at Tamworth and Trangie, and 10 May at Edgeroi, and were managed using best management practices to limit biotic stresses and nutritional constraints. Two hybrid canola varieties, Pioneer® 44Y89 (CL) and Hyola® 575CL with similar flowering times but different maturity ratings, were sown in small plot experiments at Tamworth and Trangie, however only one variety Pioneer® 44Y87 (CL) was sown at the Edgeroi site, which was overlaid in a commercial crop. Windrow timings were conducted at 2 day intervals from the start of seed colour change on the primary stem up until 100% seed colour change on branches, alleviating difficulties associated with trying to target seed colour change and hence simulated windrow timings.

Actual seed colour change was determined from a representative 200 seed sub-sample, taken from the middle third of the primary stem and randomly from across the branches of individual plants at each windrow timing. Yield and seed quality components were determined by threshing 3 x 1 m hand-cuts taken from the three middle rows at either end of experimental plots, giving 6 m of total cut area. Six plants sampled from the middle rows, three from each end of a plot, were threshed to determine the proportion of yield from branches and the primary stem, with seed moisture percentage and thousand seed weight at actual seed colour change and its contribution to yield (primary stem vs. branches) recorded. Seed quality parameters measured included oil concentration (adjusted to 6% moisture), determined by near-infrared spectroscopy (NIR) with an Infratec® 1241 Grain Analyser.

The following results focus on overall effects of windrow timing and seed colour change on canola yield and oil concentration, rather than on varietal differences.

Changes in seed size (thousand seed weight) across windrow timing can be used as an indicator of both reaching physiological maturity and yield potential over time. At Tamworth (Figure 3a) and Trangie (Figure 3b) differences in thousand seed weight on the primary stem vs. branches was greatest during the earlier windrow timings, reflecting differences in seed colour change and maturity. This would be expected given that seeds mature progressively up the primary stem and from the lower branches to the upper branches, with changes in seed colour indicating declining metabolic activity and increasing seed maturity (Hertel, 2012).

Importantly, the optimum thousand seed weight for branches occurred at a later windrow timing than current industry recommendations which are based solely on seed colour change on the primary stem. This is of relevance given that branches contributed 63% and 78% of potential yield at Trangie and Tamworth respectively. A similar pattern of thousand seed weight development on branches vs. the primary stem was also observed at Edgeroi (data not shown).

Figure 3. Changes in seed size (thousand seed weight) on primary stem vs. branches over time as determined by windrow timing for Tamworth (a) and Trangie (b) in 2016.

The methodology for the 2017 experiments was as per 2016, the only variation, being the two varieties that were compared. Unlike in 2015 and 2016, where two hybrid canola varieties Pioneer® 44Y89 (CL) and Hyola® 575CL were assessed, in 2017, a hybrid variety Pioneer® 44Y90 (CL) and an open pollinated variety ATR-Bonito were evaluated. This change was made to see if there were any differences in yield components (Stem vs Branches), SCC and seed development, between a hybrid CL variety and an open pollinated triazine tolerant (TT) variety.

Seed size expressed as thousand seed weight, is considered an indicator of physiological maturity and yield potential. When looking at changes in thousand seed weight over time as it relates to windrow timing for ATR-Bonito it can be seen that differences in thousand seed weight stem vs. branches are greatest during earlier windrow timing’s, reflecting differences in seed colour change and overall maturity (Figure 7). This trend was also observed for Pioneer® 44Y90 (CL) (data not shown). This is of significance given that the branches contributed ~85% and ~87% of potential yield for ATR-Bonito and Pioneer® 44Y90 (CL) respectively, also indicating that yield partitioning did not differ greatly between an open pollinated and a hybrid variety in this case. 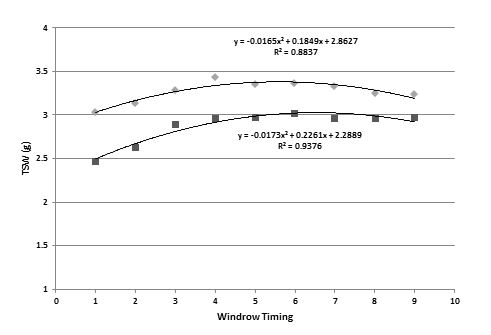 Figure 7. Changes in seed size (TSW - thousand seed weight) on primary stem vs. branches over time for ATR-Bonito as determined by windrow timing at Tamworth 2017 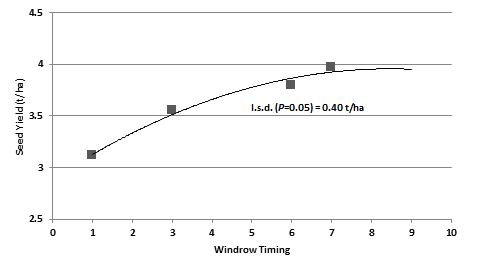 Figure 8. Effect of windrow timing on ATR-Bonito seed yield (t/ha) at Tamworth in 2017

Results from these experiments clearly show that seed colour change occurs later on the branches of canola plants compared to the primary stem. This is important when you consider that branches can contribute in excess of 80% of canola yield potential. Relying solely on seed colour change from the primary stem could result in the plants seed development being underestimated, potentially impacting seed size, yield potential and oil concentration.

This project is a component of the collaborative ‘Optimised Canola Profitability’ project (CSP00187) between GRDC, NSW DPI and CSIRO in partnership with SARDI, CSU, MSF and BCG. We gratefully acknowledge the assistance of NSW DPI technical staff with this work including Stephen Morphett, Jan Hosking, Jim Perfrement, Michael Dal Santo, Peter Formann (Tamworth); Jayne Jenkins, Scott Richards, Liz Jenkins, Joanna Wallace (Trangie); Leah Rood-England, Mitch Whitten, Joe Morphew, and Brooke McAlister (Narrabri). The research undertaken as part of this project is made possible by the significant contributions of growers through both trial cooperation and the support of the GRDC. The authors would like to thank them for their continued support and in particular Paul White and Alex Murray, ‘Tarlee’, Edgeroi.

Hertel K (2013) Canola: the economics and physiology of the timing of windrowing