Spot form of net blotch (Pyrenophora teres f. maculata) is the most widespread and conspicuous disease of barley in Australia. It is the target of many of the fungicide applications made to barley crops because it is so conspicuous and because most commercial varieties are susceptible or worse; but,

Most of these factors are unknowns. Although there have been many yield loss trials conducted on spot form net blotch, they have usually been determined on a plus/minus basis i.e. diseased vs. disease free. Maintaining a disease-free reference in SFNB trials is almost impossible with the triazole fungicides so that yield loss estimates are an under-assessment of reality. In contrast, the use of “greening” fungicides containing strobilurins to maintain disease free reference plots can have a positive yield effect on sprayed treatments, producing an over-assessment of actual losses.

We must also consider how often we experience high levels of SFNB in our crops. In wet years, disease levels are likely to be high, in average seasons the disease is less damaging and in dry seasons it is probably of low impact. To cover all of these options in the Australian environment, we would have to conduct plus/minus trials over a decade or more. Alternatively, we could impose differential epidemics within one trial over fewer years to answer most of these questions. This is one of the outcomes of the Yield Loss Response Curves Project.

Epidemics varied across years. In 2015, conditions were favourable for SFNB development and the high treatments had moderate to heavy disease. In 2016, SFNB did not develop as well as expected and overall the epidemic was only moderate. Conditions were not at all favourable for SFNB development in 2017, as cool, dry conditions prevailed for much of the season. The epidemic did develop later in the season and could only be described as light to moderate.

The greatest yield loss was recorded in the very susceptible (VS) variety SY Rattler which lost 23.3% of yield (Nil disease vs. H disease) under a moderate epidemic in 2016 (Table 1). Under the shorter and lighter epidemic in 2017, SY Rattler lost a maximum of 13.9%. SY Rattler was not included in the 2015 trial. Shepherd suffered losses of 14% and 12% in the same trials but in 2015 lost 20.4% in yield under the heavier epidemic and more favourable conditions of that year.

Flagship which is only moderately susceptible (MS) to SFNB was included in the 2015 and 2016 trials where H treatments lost 10.1% and 9.3% respectively. Losses in the less favourable 2016 season were similar.

In 2016 overall losses were relatively unimpressive. Less favourable conditions were reflected in reduced losses in all varieties. There appeared to be generally less differentiation in losses between epidemics. It is thought that this was a result of low early infection and the slow development of the epidemics once established. However the very susceptible variety SY Rattler still incurred a 23.3% loss in yield under the moderate epidemic. It was interesting to note that under the M epidemic SY Rattler lost only half the yield (12.2%) of the H treatment.

Weather conditions in 2017 were quite adverse to the development of SFNB. The epidemics did not establish until late in the season reducing the number of cycles of spore production and infection that could occur. Consequently disease levels were disappointing. SY Rattler lost only 13.9% of yield under the H disease treatment but again demonstrated a marked reduction in yield loss from the M disease treatment (Figure 1). No loss in yield was recorded in the L and VL treatments. Shepherd and Commander incurred similar losses to SY Rattler but did not show the same differentiation across epidemics. The level of resistance in Scope appeared to provide reasonable protection under this lighter epidemic. 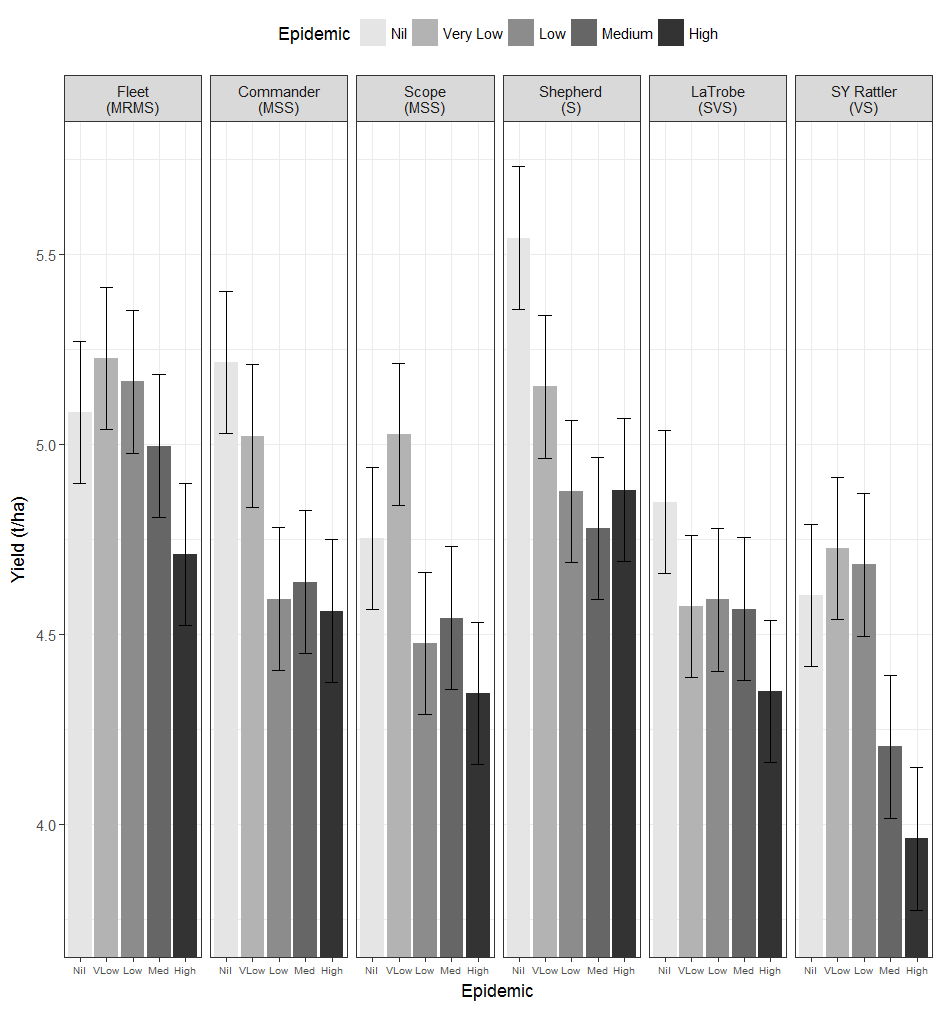 Figure 1. Yields of six commercial varieties of different levels of resistance to spot form net blotch under differential epidemics in 2017. (The varieties Fleet, Commander, Scope, Shepherd, La Trobe and SY Rattler in the graph above are protected under the Plant Breeders Rights Act 1994)

No loss in yield was recorded in the L and VL treatments. Shepherd and Commander incurred similar losses to SY Rattler but did not show the same differentiation across epidemics. The level of resistance in Scope appeared to provide reasonable protection under this lighter epidemic.

In 2015 and 2016, Compass was used as a MRMS variety; however difficulty in keeping plots free from leaf rust resulted in the use of Fleet in 2017. The H treatment resulted in a loss in yield of 7.3% but there was no significant difference in yield across all other treatments of this variety.

In 2015 all varieties responded to epidemics as planned. It appeared that the disease established early and progressed throughout the season, reducing yields that reflected the severities of the epidemics imposed.

In 2016, the losses to differential epidemics were much less well defined except in the VS variety SY Rattler. Commander performed much better than Scope in that year which may be due to a late infection of leaf rust in the latter variety. This might also explain the higher than expected losses in Flagship.

Yield losses to foliar diseases in barley are a function of varietal susceptibility, severity of infection, duration of the epidemic and environment. In the case of SFNB a very susceptible variety, sown into highly infested stubble, where the crop becomes infected early and the epidemic persists throughout the season, losses to 30% could be expected. Varieties rated MS or better are unlikely to lose more than 10% in most years.

The responses of Flagship over 2 years and Fleet in 2017 show the benefit of sowing varieties that are MS or better. It is considered that this should be the minimum standard for release of varieties to lessen the impact of SFNB on barley production.

Thanks to our technical staff Janet Barsby, Judy McIlroy and Yuriy Tsupko for their efforts in inoculating, assessing and irrigating the trials in a year when it looked like epidemics would fail.