Does glyphosate formulation affect the control of glyphosate resistant weeds?

The aim of this paper is to discuss findings from initial trials that have identified significant differences between glyphosate products. The composition of salts and surfactants between some glyphosate products vary significantly. Glyphosate is a weak acid and is combined with a positively charged salt to produce a stable commercial formulation. Salts include isopropylamine (IPA), dimethylamine, trimesium and potassium.

Significant differences in efficacy between glyphosate products have been identified in pot trials conducted on winter and summer annual weed species in outdoor growing conditions. Three undisclosed registered glyphosate products were compared in initial trials, with significant differences in weed control. Herbicide products Gly 1 and Gly 3 gave consistently greater control than Gly 2 on susceptible and resistant ryegrass (Figure 1). In the field, this could be the difference between controlling ryegrass individuals with low-level resistance and allowing them to survive, cross-pollinate and increase the levels of glyphosate resistance. 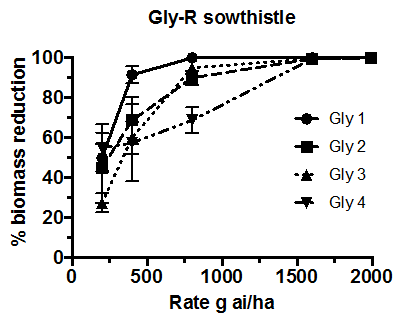 Differences between glyphosate formulations were also detected on healthy fleabane, feathertop Rhodes grass and windmill grass in outdoor summer pot trials (Figure 3). Large differences were evident at lower rates that can represent similar activity to label rates on stressed weeds in the field. These results suggest that large differences in efficacy between glyphosate products can occur. At 200g ai/ha glyphosate, product Gly 1 was more active on fleabane whereas it was not on windmill grass or feathertop Rhodes grass. This indicates that one product was not consistently more active on all three weed species. Temperature has been identified as playing a major role in glyphosate efficacy. Significant differences were identified in wild oat control with the same glyphosate product in plants sprayed in outdoor summer or winter pot trials in South Australia (Figure 4). Complete control of a wild oat population was not achieved in summer even at higher than label rates (1600g ai/ha glyphosate) whereas in winter trials complete control was achieved with 400g ai/ha glyphosate. These large differences suggest that controlling wild oats in summer fallows can be affected by high temperatures. 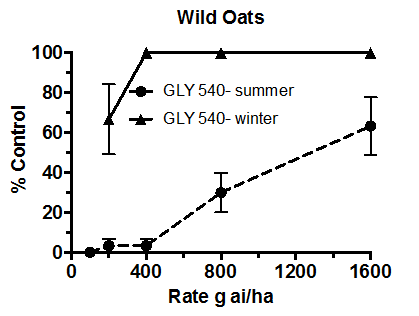 Temperature effects on barnyard grass control with glyphosate have also been identified (Nguyen et. al. 2016). At higher temperatures reduced control of some resistant biotypes was detected.

Table 4. Effect of temperature in control of four biotypes of sowthistle with glyphosate 540. Data is LD50= dose required to kill 50% of the population (J. Malone, University of Adelaide).

The research undertaken as part of this project is made possible by the significant contributions of growers through both trail cooperation and the support of the GRDC, the author would like to thank them for their continued support under project UCS00020. Additional thanks Tony Cook from NSW DPI Tamworth and to Sinochem Australia for permission to use trial data.