As a result, alternatives to the conventional sorghum and maize production systems are being sought. There is a need to move the critical stages of flowering and grain fill away from the late December/early January timeframe to avoid the high likelihood of extreme temperatures in this period.

In order to minimise the impact of these heat stress events, several tactics which growers could readily adopt into their current farming systems were evaluated in these experiments.

Establishment counts were conducted 5 - 7 days after sowing and then at weekly intervals until plant emergence had ceased. Days to flowering and plant cuts were taken at physiological maturity to provide biomass and harvest index information.

At the time of writing, the experiments had not yet reached harvest. However, all experimental sites will be harvested and grain yield and grain quality parameters measured.

In the 2017/18 season three sorghum dryland experiment locations were conducted:

The sorghum experiments were sown targeting a plant population of 50,000 plants/ha.

Three maize experiments were conducted in the 2017/18 season and included three factors:

The three hybrids used in these experiments were selected based on their differing plant types:

There was a difference in soil temperature between the deep and shallow depths. On average across all sites, it was 0.6°C warmer at the deeper sowing depth.

At all three sites the plant establishment was better from the shallow sowing depth of 4-5 cm, compared to the deep sowing depth of 7-8 cm. This result was consistent across each of the sowing times, demonstrating that even under warm soil temperatures, there was still a reduction in establishment as a result of the deeper sowing depth. Seedbed moisture also needs to be considered as the soil dries out faster at the shallow depth. At the Breeza site only, an irrigation flush was applied prior to sowing to ensure even seed bed moisture. The temperatures at Breeza were lower compared to the other two sites.

There was no statistical difference in the time taken to emerge based on the weekly assessments. The results from the Breeza site only are contained in Table 2.

The nine sorghum hybrids used in these experiments established differently. The results were not always consistent across all three sites. The data from Breeza has been shown below (Figure 2) for a selection of four hybrids. Two hybrids, MR Buster and MR Apollo, from Pacific Seeds showed no variation between each other. In contrast, the two hybrids from Nuseed, Cracka and Tiger, behaved differently at the two colder sowing times, TOS 1 and TOS 2. Cracka established more plants and quicker than Tiger.

These are preliminary observations from this site which need to be considered in the context of seed quality e.g. germination and vigour differences could explain some or all of this variation. As such a pot trial is being conducted in unison with these field experiments to gather more detailed information on temperature, emergence and the influence of seed quality.

There were no plants emerged until 7 DAS from each of the three sowing times. TOS 3 emerged rapidly between 7 and 14 days post sowing to reach the target plant populations, with the exception of the highest population. There was a significant delay in plant establishment for TOS 1 and 2 until 24 DAS, at which point the established populations were not significantly different between the three times of sowing (Figure 3). Plants were still emerging at 30 DAS from TOS 1. 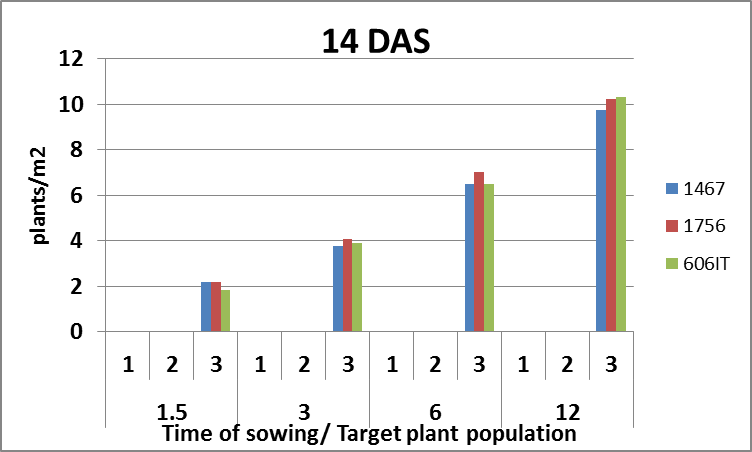 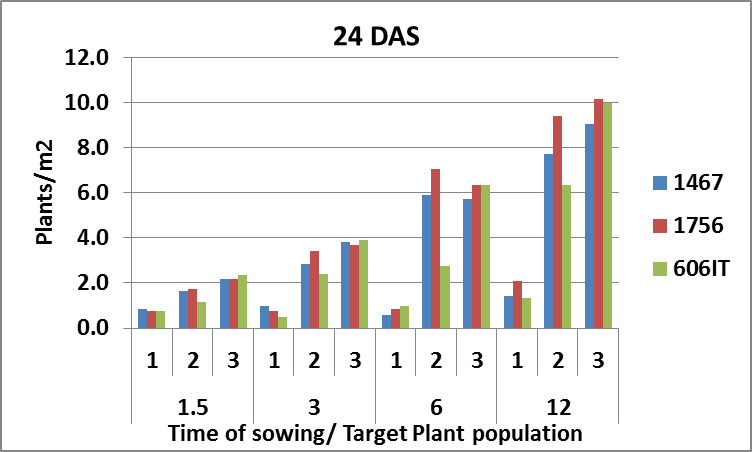 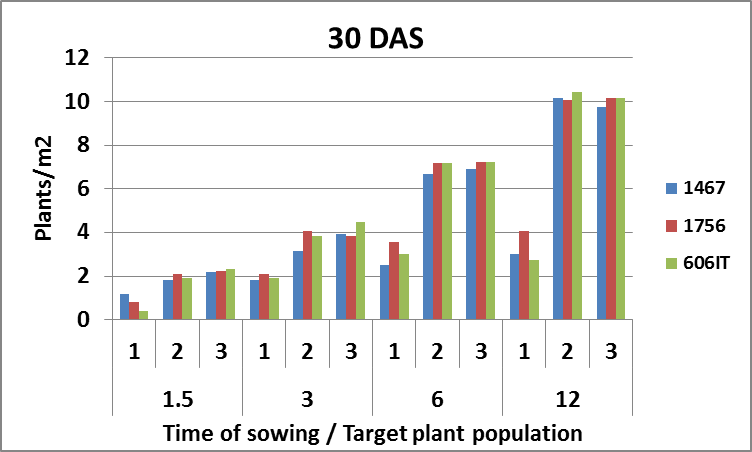 The three hybrids all established well within their target plant population categories. As such no major differences in hybrid populations were present by the last time of counting at 42 DAS.

At the time of writing, these 2017/18 season experiments had not yet been harvested so data relating to grain yield and quality was not available. This information will ultimately assist in the discussion of whether any of these tactics; hybrid selection or type, sowing depth, sowing time or plant population can assist growers to avoid the impact of heat at flowering and grain fill.

Grain sorghum was able to be established at much lower temperatures than is commercially recommended, however there are other issues to be considered before adopting this approach commercially.

The effects of the colder sowing were much less evident in maize than in sorghum. Based on current agronomic recommendations for a colder soil temperature for maize compared to sorghum, this result is not surprising.

The three hybrids were selected based on varying plant types. These three plant types are being used as indicators of the potential for maize to be manipulated to improve reliability and yield, particularly in the less favourable maize growing environments such as west of Moree.

The synchronisation of tassels and silks is critical to ensure seed set. Moisture stress and heat at flowering are two of the most important influences on these plant processes.

There are several different theories relating to plant types:

The inclusion of final plant, grain yield and quality data from the three trial sites will add significant information to allow interpretation of the value of these treatments. It is important to consider that this data is only from one season so additional years data will add to the value of this dataset.

The research undertaken as part of this project is made possible by the significant contributions of growers through both trial cooperation and the support of the GRDC and NSW DPI, the author would like to thank them for their continued support.

Thanks to Paul Slack, “Koreen” Gurley and Jason & Geoff Hunt “Heathfield” Mallawa for hosting the experiments and Tony Lockrey with site assistance. The seed companies are thanked for allowing their hybrids to be used in the experiment.