The Darling Downs and Western Downs have now hosted four deep placed phosphorus (P) and a single deep placed potassium (K) experiment since 2013. The sites are located in the Wondalli, Condamine and Jimbour West districts. Most research experiments have had four crops sown and three of those harvested. The wet winter of 2016 meant two pulse crop sites didn’t make harvest.

Subsoil P (i.e. below 0.1m) appears limiting across most of the region on soils formed from either alluvial deposition or in-situ, based on historic data from land management manuals and soil surveys. While Low K is mostly confined to just soils formed in-situ on the upland slopes and plains of the eastern production regions.

While the soil surveys are extensive in their coverage, they are not universal and field testing is recommended to determine soil P and K nutrient levels. Soil testing with separation into surface and subsurface layers provides an assessment of availability of P and K for the soil on your farm. Soil P and K testing does not require a high intensity analysis campaign like that for nitrogen (N), which is much more dynamic and consequently requires a higher sampling frequency.

Results from the deep placement P field program has been operational for some time, what have been the multi-year grain yield responses from the deep-placed experiments? Is there an economically viable response to placing these immobile nutrients deeper in the soil?

Deep P experiments have all been established with 6 treatments (Table 1a). The Jimbour West site is displayed as it has an additional basal K application (50 kg/ha), but at other sites where the exchangeable K was above 0.2 cmol/kg in the 0.1-0.3 m depth, potassium was not applied. Soil test values for the P trial area at Jimbour West are shown as an example of the soil test values where responses are expected (Table 2). The soil is a Grey Vertosol (Cecilvale), with stratified P and K distributions, meaning the availability of these nutrients is higher in the surface 0-0.1 m layer than the soils below that.

A second trial was established at the Jimbour West site only (Table 1b) to look at the interaction between deep P and deep K.

A “Farmer Reference” (labelled “FR”) treatment was included as an untreated control, providing baseline data on yield and nutrient uptake. Deep-placed fertiliser was applied perpendicularly to the crop sowing direction, at a depth of roughly 20 cm in bands 50 cm apart. Deep P plots were split so that growers could apply a starter P application to half of the treated area at sowing.

The starter P treatments equate to grower practice for product and rate. There were 6 replicates in each site to better handle field variability across reasonably large trial areas. Urea was applied to balance the nitrogen input through a tine positioned between the bands of deep P and K. Full details of the agronomic management for the sites are contained in the Queensland Grains Research - 2017 regional agronomy trial book (yet to be released).

Table 1. Experimental treatments for deep placed a) P and b) K experiments

Above ground biomass was measured at maturity from selected treatments in both experiments. Grain yield was measured using a plot harvester and grain yield corrected to receival standard moisture content.

We will not explore the starter response in any detail in this paper. Our recommendation is application of P as a starter with the seed at sowing continues, as significant reduction in grain yield often results when starter P is omitted. The role of starter P in cereals to establish early vigour and set yield potential has been well documented, so the focus of our work has been on the response to deep P, and whether this response is reduced or eliminated by the use of starter P application.

Individual site responses for deep P have been outlined at previous Grains Research Updates and are detailed in the latest Queensland Grains Research - 2017 regional agronomy trial book. In this paper, we are focussing on the cumulative impact of deep treatments on grain yield and economic returns.

At all sites, deep-placing P has increased cumulative grain yield compared to the untreated farmer reference control (Table 4). Increases have been largest at the Wondalli and Jimbour West sites, with increases approaching 20% from 20-30 kg P/ha at depth. The 10% response at Jimbour West to the zero P treatment is not able to be put down to a single factor, but the combination of deeper tillage to resolve any remnant compaction and the basal application of N and K are likely to be the major influences. This will be looked at again later in the paper. Responses at the Condamine sites are more muted, with the Condamine North site in particular experiencing a mixed run of seasons in which variable crop establishment has made detecting treatment responses more challenging.

Cereal crops (wheat, sorghum) have a relatively straightforward mechanism to grain yield, with biomass related directly to grain yield via harvest index. To explore the relationship between P uptake and grain yield for the cereal crops, the relationship outlined in Figure 1 shows that for each kg of P taken up an additional 277 kg/ha yield was grown. By increasing the amount of P the crop can access through deep placement, biomass production has increased and more grain has resulted. 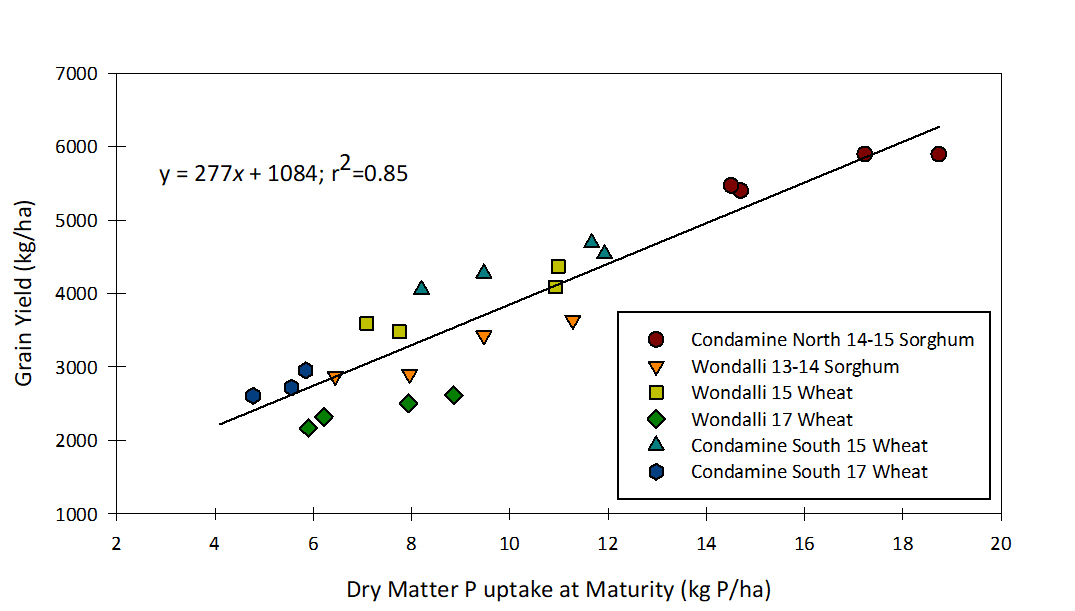 When the relationship in Figure 1 is examined more broadly for grain crops, the linear relationship shown often flattens out at higher P uptake – not because the crop has enough P, but because the crop is not able to get enough N to meet the higher yield potentials. It is important to remember that removing a yield constraint like low subsoil P will have implications for nitrogen management, with potentially higher yields requiring a greater nitrogen supply.

Interaction with P and K

The 10% response to the zero P treatment (i.e. tillage and background N, K, S and Zn) at Jimbour West requires some further explanation, so the individual crop yields will be outlined to explore the responses to tillage, basal nutrients, P, K and their additive interaction. Refer again to Table 1b, which has the nutrient applications listed.

Barley yield in 2014 (Figure 2a) was increased across a number of treatments, with effectively two things happening to increase grain yield. First, the combination of deep tillage and extra nitrogen boosted yield by 438 kg/ha, not deep P or K. Looking at treatments 2 to 5 which are combinations of tillage and basal nutrient (treatment 2, 0K 0P), potassium only (treatment 3, 100 K 0P), phosphorus only (treatment 4, 0K 20P) and low K rate with P (treatment 5, 25 K 20P) they all have grain yields that are not significantly different. Once the K rate is 50 kg K/ha or higher (the 100 rate) with P application then grain yield is boosted to over 4800 kg/ha. The combination of deep tillage (to reduce compaction), and nutrients (N and P and K and S and Zn) are all working together.

Mungbean in 2014-15 (Figure 2b) showed statistically significant responses but is difficult to interpret as the effects were inconsistent across the treatments. While the comparison between the 0K- 0P and 100K-0P is valid with yield being increased, the lack of response to the same 100K with 20P treatment casts some doubt on the result.

The late-sown sorghum in 2015-16 (Figure 2c) performed relatively poorly for the available moisture, with yields not significantly affected by any treatment despite the trend for increasing yield with increasing K rate in the presence of deep P.

Chickpea grain yield in 2017 (Figure 2d) had several factors additively increasing yield, similar to the barley in 2014 (Figure 2a). Yield in the 0K-0P was higher by 226 kg/ha (11%) than the FR, so the combination of previous deep tillage and basal N, S and/or Zn nutrient was still boosting yield. Adding 100 kg K/ha without P then increased yield by another 317 kg/ha (15%). Phosphorus application without K had no yield effect, as the 0K/20P and 25K/20P treatments had same yield. Applying higher rates of K with P did increase the grain yield in the 50K/20P and 100K/20P treatments. Highest yields measured where 2780 kg/ha, which were 720 kg/ha (35%) more than the untreated farmer reference baseline. The additional grain yield from these trials has been translated into a gross margin change, accounting for cost of application, basal nutrient and fertiliser P (Table 5) – again using the untreated farmer reference as the baseline. After 3 crops, each of the deep-P treatments at Wondalli and Condamine South have provided a positive return that has easily exceeded treatment costs.

The $200/ha return for zero P at Condamine South and $440/ha at Jimbour West suggests there has been a response to one or more of the background treatments of deep-tillage and/or basal nutrient application, with the P treatments providing between $100 and $200/ha in additional benefit. At the Wondalli site 20, 30 and 60 kg/ha of P have all currently generated greater than $300/ha in additional profit over three crops, however there appears to be no response to the deep tillage or basal nutrients.

After 2 crops, both 20 and 30 kg/ha of P have generated positive returns at the Condamine North site, but although the 60P treatment has also generated yield benefits (Table 4), these have not yet been enough to overcome the additional fertilizer input cost, which was ~$120/ha more than in the 30P treatment.

The final economics of the different treatments will be dependent on response duration (and also crop price), with higher rates having higher upfront costs, but also expected to have a greater duration of benefit in the field. The period over which the responses can be maintained is currently under investigation, with sites due to finish field experimental operations in December 2019.

This research has been conducted under controlled experimental conditions. Before commencing a large-scale nutrient application program, growers are urged to appropriately soil test their fields to establish the levels of available nutrients in both the surface and subsurface layers, and thus quantify any potential constraints to yield. They are then encouraged to evaluate the responses on their soils using an appropriate program of strip-trials and on-farm exploration. Growers should note a couple of key points –

The deep-P calculator may allow you to estimate the economics of P applications in your individual conditions.