Getting nutrition right in Central Queensland

Over the past five years the UQ00063 project has been monitoring a series of nutrition-based trials sites across Central Queensland (CQ). These trial sites were chosen based on soil test evidence showing varying degrees of nutrient depletion in the surface (0-10cm) and sub-surface (10-30cm) layers.

This is particularly evident for the non-mobile nutrients of phosphorus (P) and potassium (K). In some established zero tillage production systems there is a marked difference between the nutrient concentration in the top 10 cm of the soil profile and the deeper layers (10-30 cm and 30-60 cm) that cannot be explained by natural stratification. It would seem that this pattern of soil analysis is becoming more evident across CQ, particularly in the Brigalow scrub and open downs soil types.

This project aims to find whether a one-off application of P and/or K, placed in the sub-surface layer (10-30cm) can provide a grain yield benefit and whether that benefit can be maintained over several years.

Eight trial sites were initially established with deep P trials, and six of those sites also had deep K trials co-located in the same field (i.e. both P and K were marginal to low). All trials followed a similar protocol with eight common treatments. The four main treatments were based around increasing rates of P or K. For the P trials; rates of 0, 10, 20 and 40 kg of P/ha were used. The K trials included 0, 25, 50 and 100 kg of K/ha. In all treatments, background fertiliser was applied to negate any other potentially limiting nutrients. This background fertiliser included; 80 kg of nitrogen (N), 50 kg of K (if it was a P trial), 20 kg of P (if it was a K trial), 20 kg of sulfur (S) and 1 kg of zinc (Zn).

These main rate treatments were accompanied by two other treatments that included the highest and lowest rate of nutrient without the background P or K (i.e. P trials had no background K or S, and vice versa), although background N and Zn were retained. These allowed us to assess the interacting effects of P or K if the other nutrient was also limiting (e.g. would we see a K response if we did not first fix low P). A final two treatments included farmer reference (FR) plots, and an extra zero plot to give two controls for each replicate. The FR treatments had nothing additional applied during the initial application of treatments and were not deep ripped, thus representing normal commercial practice of the current farming management (Table 1 and Table 2).

On some sites the effects of an additional starter fertiliser treatment applied at planting were also evaluated, with the main plots split into ‘with’ and ‘without’ starter. Starter fertilizer was applied at a general rate of ~30 kg/ha, either as MAP or Starter Z.

Table 4. Summary of significant site responses to deep P and K across crops and seasons.
Maximum yield response achieved (as a % of the ‘0P’ or ‘0K’ treatments)

Responses to deep banded P have in general been, consistent with soil test values (Table 5), with large grain yield responses of between 14% and 100% recorded (Table 4).

The K responses have been smaller, with yield responses ranging from 8% to 29% and these responses have not always followed the predicted response based on soil test values (Table 5). For example, the Comet River site has a low exchangeable K reading in the sub-surface layer (10-30cm) but so far has not responded to deep K in chickpeas or wheat, while the Clermont site had a higher exchangeable K status in the same layer but did respond to deep K in sorghum.

At least part of the reason for the uncertainty around K responsiveness relates to seasonal conditions and the amount of K that can be utilised out of the topsoil when it is wet enough. It also reflects that the soils are not as depleted in K as they are in P at this stage of the crop cycle. There may also be slow release K minerals present at some sites which the exchangeable K test does not measure.

Table 5. Soil test values for P and K at all responsive trial sites.

When assessing soil test results to identify possible nutrient constraints, the following tables (Table 6 and Table 7) are a useful guide. These figures are based on extrapolation of trial data that has been accumulated across all Queensland nutrition sites over the last five years. It is also worth noting that the critical values for K may increase somewhat in soils with a high cation exchange capacity (i.e. >40 cmol/kg)

Consistency in response to deep P and K is dependent on a number of factors. Some of these factors relate to the concept of nutrient stratification, which is driven by the lack of mobility of both these nutrients in our clay soils. Stratification occurs when there is a build-up of P and K in the surface layers from either starter fertiliser application (P) or the constant breakdown and release of nutrients including P and K out of stubble. While enrichment of the surface layers by these two processes is occurring, there is a depletion of these non-mobile nutrients out of the sub-surface layers from normal plant uptake, particularly during dry seasons. When roots are living on stored soil moisture, they are also accessing subsoil nutrients to be able to grow successfully.

A number of the P responsive sites in CQ have adequate levels of P in the surface layer (0-10cm) but that P status drops off significantly in the sub-surface layer (Dululu, Springsure Creek and Comet River). This characteristic can affect the seasonal response to deep placement of nutrients. When adequate in-crop rainfall is received then the surface layers hold moisture and allow the plant to access those surface nutrients. This reduces the reliance of the plant on being able to forage for water and nutrients deeper in the profile.

When the crop has little in-crop rainfall, which is quite common in CQ winter crops, the surface layer dries out and the plant is unable to access those non-mobile nutrients trapped in the dry surface soil. This is why quite often the strongest response to deep banded P and K is in dry seasonal conditions.

Timing of rainfall in relation to crop stage can also have an influence on response to deep P and K. Different crop species set components of yield at different stages in the crop cycle. For example, grain number in wheat is set during the first six weeks after planting, and the number of tillers (and hence grain heads/ha) are determined shortly thereafter, so this is a critical period for crop P availability. Conversely, a crop like chickpeas sets its yield from the start of flowering (60 days after sowing) and the next 30 days following – considerably later in the season. If surface soils are dry during these critical periods, the plant has to access nutrients in the sub-surface layers, and it is in those seasons when deep placement of P and K have the largest impact.

This concept is best exemplified by data collected at the Dululu site, where there was no significant response from the deep placed nutrient treatments in wheat in 2016 but there was a significant response to both P and K in the chickpea crop in 2017 (Table 4). Rainfall data (Figure 1) would suggest the chickpea crop experienced a very dry surface soil profile at the start of flowering and over the following 40 days, meaning reliance on deeper soil layers for P and K was likely to be high. In contrast, the previous wheat crop had a number of significant in-crop rainfall events that would have ensured that the crop had access to surface soil nutrients in moist soil for extended periods during the season. 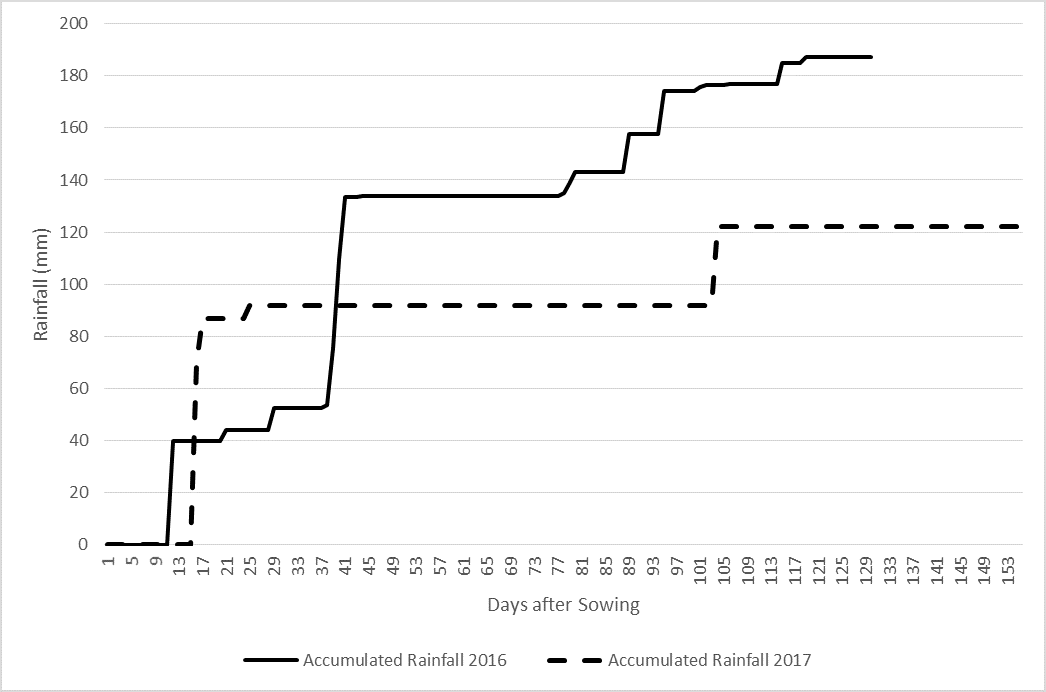 Another plant characteristic that would have influenced the result at the Dululu site would be root structure. Cereal crops such as wheat have an adventitious root system, which has a high proportion of fine roots (high surface area for absorption) and generally a large root mass spread throughout the profile (like a spider web). This makes wheat a very good forager for nutrients, as it has more opportunities to exploit more of the soil containing non-mobile nutrients. Therefore, in soils with constrained P and K levels, wheat has an advantage with its root system in that it can minimise the impact of low nutrient status better than a chickpea crop can.

In contrast, grain legumes such as chickpeas tend to have a tap root system with fine lateral roots developing from the main tap root. This means generally a lower total root mass and a lower total surface area for the root system, so a root system that is potentially less able to exploit a given soil volume. Grain legumes tend to overcome this constraint by being very dependent on symbiotic relationships with organisms like mycorrhizae (VAM) to assist in acquiring nutrients.

There is no doubt that based on the trial data collected over the last 5 years, chickpeas have had a much stronger response to deep applied P and K than sorghum or wheat in the CQ region. While grain legumes such as chickpeas do have higher grain nutrient concentrations, cereals are also vulnerable to low soil nitrogen availability – something that does not typically impact on grain legumes. General soil test values across a number of CQ sites have suggested that low N status may be limiting cereal crop yields in a number of paddocks (Figure 2). 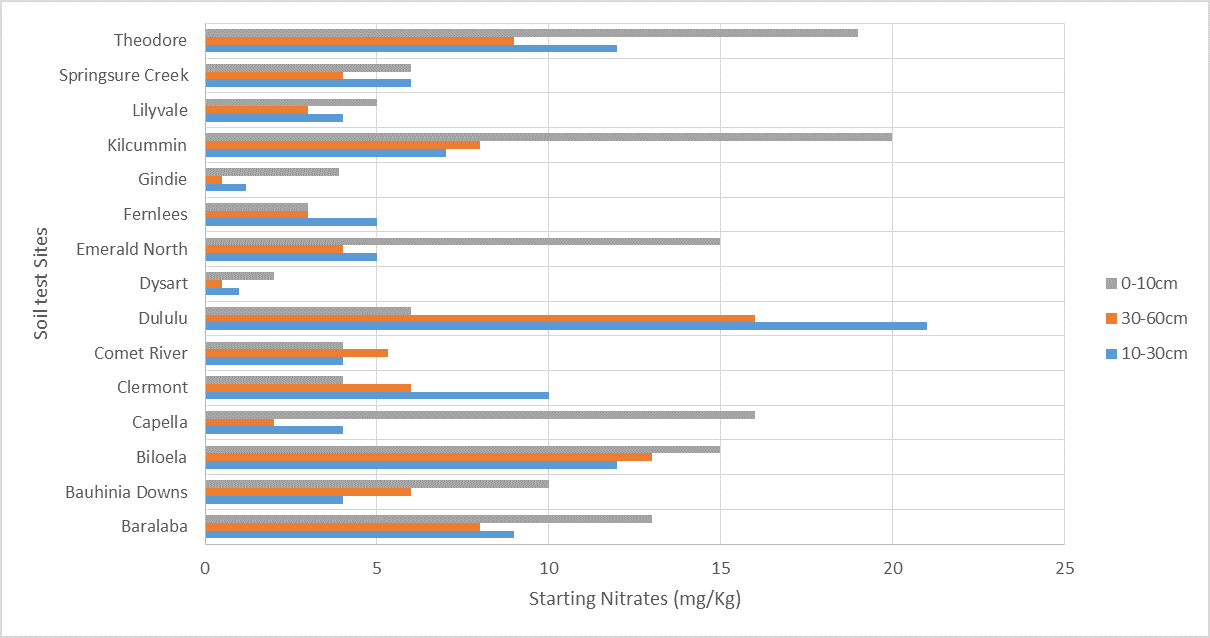 This has led to low protein levels (7-8% in sorghum and wheat) in some trials where the responses to P and K have been limited. Chickpea crops grown after cereal crops have shown much larger responses to the deep P and K than in the previous cereal crop.  Part of this response is thought to be because there is no N limitation for a grain legume. Data collected from the Dysart site has shown good evidence of this issue (Figure 3). 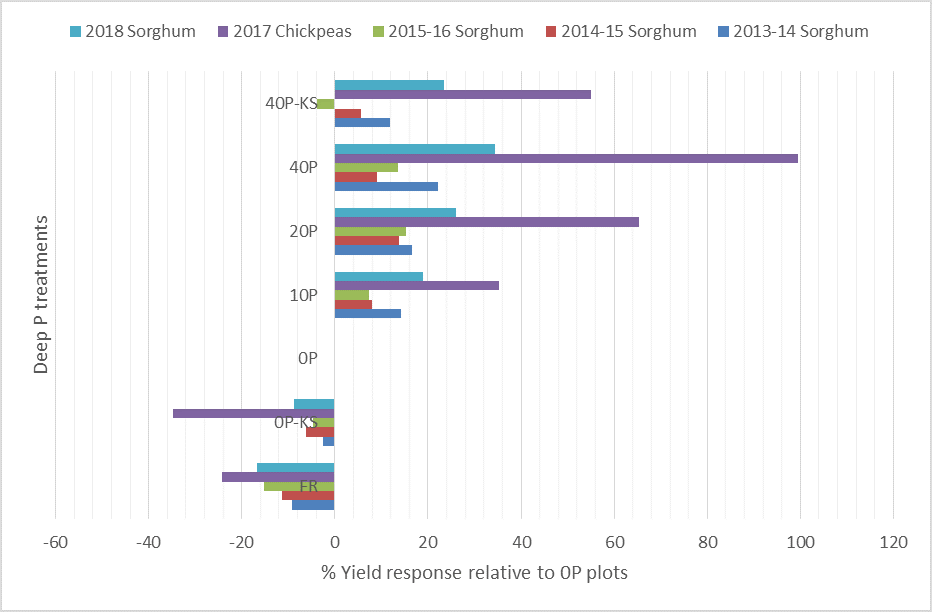 The difference between the 2015-16 sorghum and the 2017 chickpea crop (Figure 3) in terms of relative yields is dramatic (15% to 100%). It is possible that some of this yield increase may be due to chickpeas being not limited by nitrogen levels where as the sorghum crops can be.

In general, soil test values have predicted responses to deep placed P and K in 80% of sites tested in CQ using depth increments that ensure separation of the surface and sub-surface layers. While the scale of these responses has been variable, the P response have been reliable.

There are a number of factors that will influence the size of the response from deep placed P and/or K. These factors include: