Survey of glyphosate resistance in Queensland and New South Wales

Sowthistle is one of the most widespread weeds in the northern cropping region and has the ability to germinate at most times during the year.

In approximately 600 paddock surveys in Qld and NSW;

Annual sowthistle is widely distributed in Australia. Virtual herbarium records indicate the presence of this weed in all Australian states and territories.  (Figure 1). The recent development of populations that are resistant to glyphosate has the potential to greatly complicate and increase cost associated with management of this weed – particularly in the fallow. 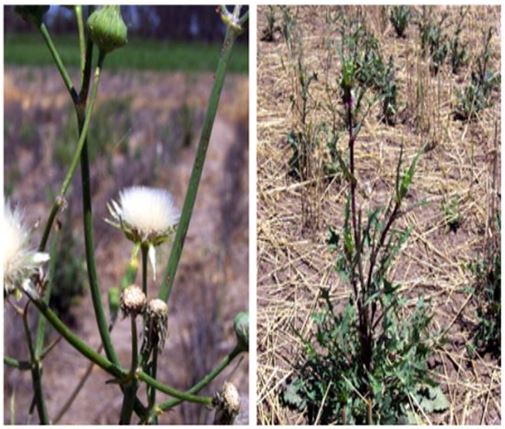 Annual sowthistle develops bigger basal leaves (up to 30 cm). New leaves added as the plant grows are progressively smaller. Leaf development is alternate with leaves clasped around the stem. Plants can grow up to 1.5 m high. Stems are hollow and will ooze a white sap when broken.  Flowers are yellow (dandelion like) and, when mature, develop into a small tuft of white flower head suited to wind dispersal (Figure 5). The yellow flowers and seed head closely resemble another species called ‘prickly sowthistle’ (Sonchus asper L.). As the name indicates, prickly sowthistle has spiny leaves and can be easily distinguished from annual sowthistle (Figure 6). 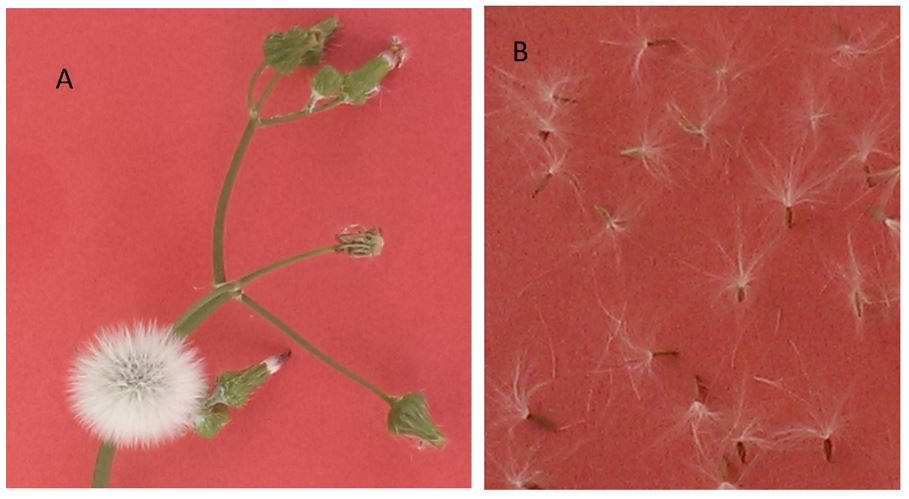 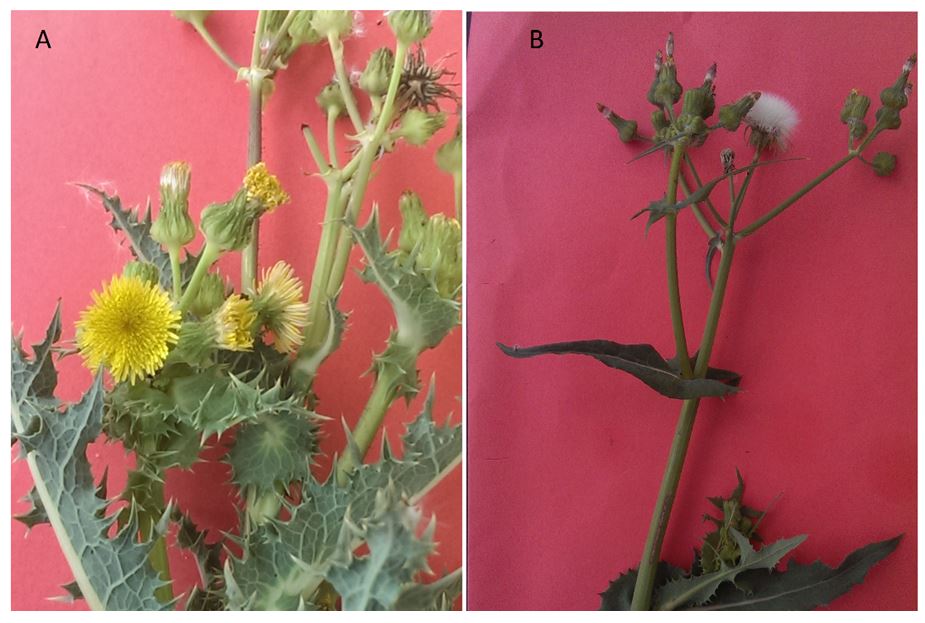 Previous studies from South Australia and Queensland indicated the potential of this weed to emerge under a broad range of light and temperature conditions. Darkness inhibited germination compared to an alternating light and dark environment, however 40% germination was still achieved in the dark environments.

Annual sowthistle was also shown to germinate under a broad range of soil pH, salinity conditions and water stress environments, although germination was substantially higher under non-water stressed environments where surface soil water was close to saturation.

Recent studies investigating the effect of seed burial depth and the impact of stubble residue on germination have shown the following results.

Figure 7. Effect of seed burial and residue cover on the emergence pattern of two populations of annual sowthistle sourced from St George and Dalby areas of Queensland (Manalil and Chauhan, GRDC UA000156)

In work conducted by Manalil and Chauhan in 2015-17, seed persistence was evaluated for a period of 18 months at 0 cm, 2 cm and 10 cm depths on two populations from St George and Dalby. Seeds were exhumed at different times (0, 3, 6, 12, 18 months after burial) and examined in the laboratory for their germination.

Results of burial depth and seed persistence studies indicated the possibility to include tillage (aiming for seed burial) as an option for the management of this weed. This is because there was significant reduction in the level of emergence from seeds buried at layers deeper than 2 cm (less than 25%) and the seed depletion over time as indicated by the seed persistence study.  The results justify grower experience of successful management of this weed using tillage.

A study at Gatton Queensland explored the competitiveness of annual sowthistle in an irrigated wheat crop. The density for sowthistle was 0, 13, 36 and 70 plants/m2 for nil, low, medium and high-weed density plots, respectively (Figure 8). The corresponding yield loss was 20%, 50% and 56% at low, medium and high densities of sowthistle, respectively.  The analysis indicated that the weed density of 51 plants/m2 annual sowthistle could cause a yield reduction of 50% under the tested environment. 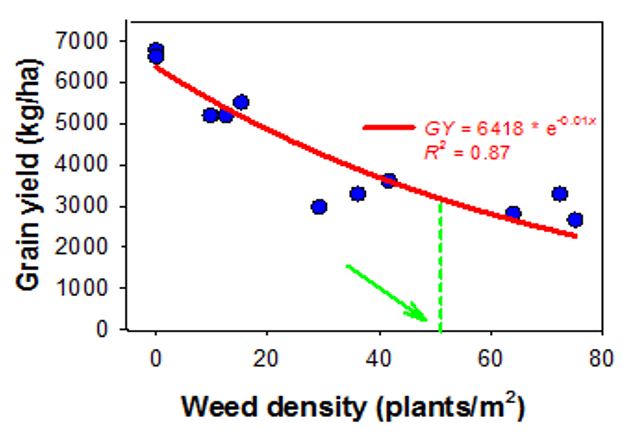 Figure 8. An exponential regression model showing the relationship of wheat yield and weed density (at the anthesis time) of annual sowthistle. The green arrow shows the weed density (plants/m2) to reduce 50% of the maximum grain yield (Manalil and Chauhan, GRDC UA000156) 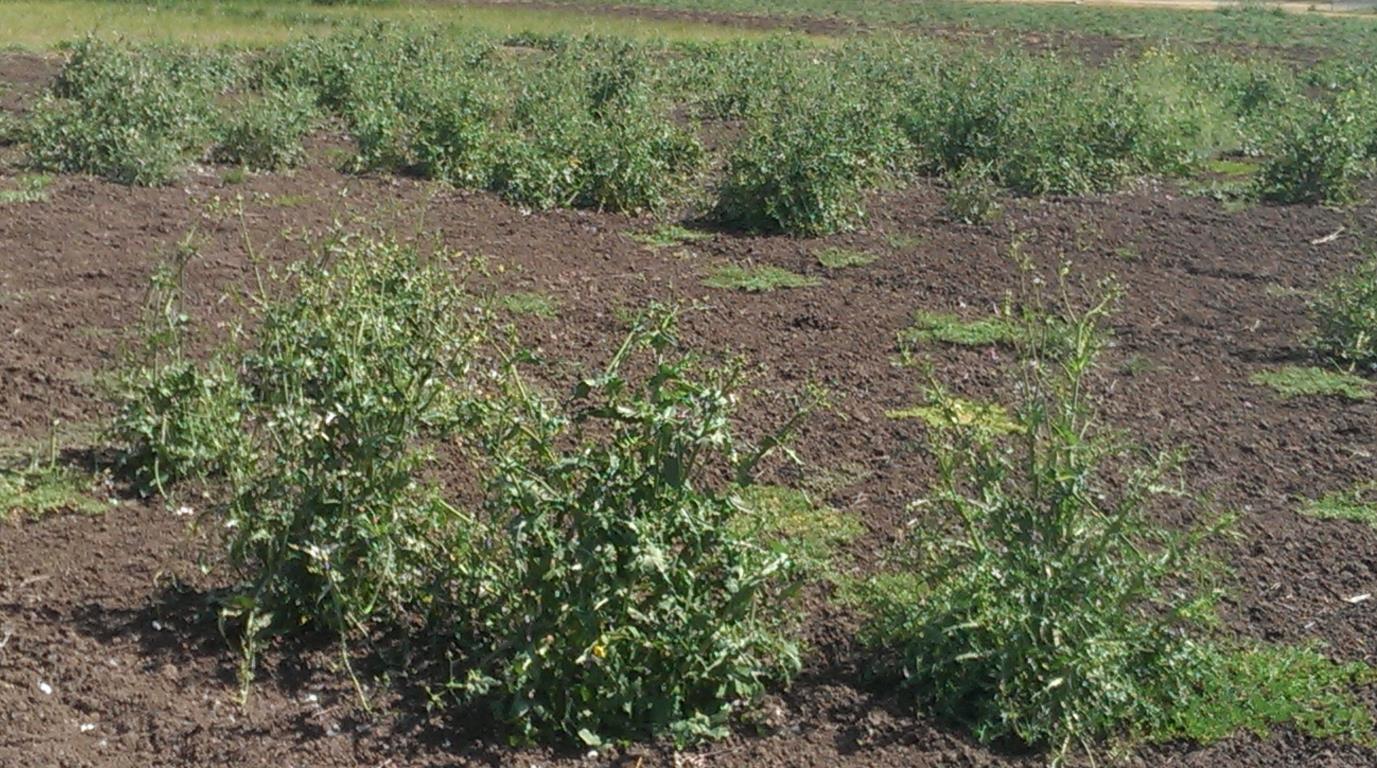 Figure 9. Annual sowthistle establishment in a fallow at Gatton (photograph taken
by B. Chauhan on 27th August 2017).

Annual sowthistle has already evolved resistance to glyphosate (Group M), chlorsulfuron (Group B), and 2,4-D (Group I) in Australia. This necessitates implementing a diverse approach to the management of this weed species. Growers are recommended to implement a range of strategies as identified in the WeedSmart “The Big 6”.

A range of products are available for the control of annual sowthistle but care should be taken to maximise and preserve their efficacy.  All products should be applied at the correct growth stage, increasing application water volume as plants size increases and avoiding spraying weeds during period of acute water and heat stress. Herbicide options for the control of sowthistle include:

Note: All products must be applied in accordance with label “Directions for Use” as published by the APVMA.

The research undertaken as part of this project is made possible by the significant contributions of growers and agronomists through both trial cooperation and the support of the GRDC, Queensland Government, Charles Sturt University and The University of Sydney. The author would like to thank them for their continued support.