Pathogenicity testing indicates shifts in the A. lentis pathogen population in South Australia

Forty isolates of Ascochyta lentis collected in 2017 from lentil field trials and commercial crops (36 from SA, four from Victoria (VIC) were tested in controlled environment conditions in 2018 on a differential host set that included the Australian commercial cultivars Nipper and PBA Hurricane XT (Table 1). Half of the isolates tested were capable of causing lesions on PBA Hurricane XT and almost a third (32.5%) were capable of infecting the resistant line Indianhead which is the presumed source of resistance in PBA Hurricane XT. This is an increase of 22.5% and 27.5% in the number of isolates capable of infecting PBA Hurricane XT and Indianhead respectively, compared to testing of 2015 isolates conducted in 2016 (Table 2).

The A. lentis pathogen population is naturally variable and aggressive forms are selected over time in intensive cropping systems. This has been seen with the intensive cropping of PBA Hurricane XT on the Yorke Peninsula and in the Lower North in SA where crops have developed moderately susceptible leaf lesions during 2015-2018. In 2018, PBA Hurricane XT was the dominant cultivar representing up to 90% of the lentils cropped in SA (pers. comm. Sam Holmes, Central Ag Solutions). The downgrading of the foliar rating of PBA Hurricane XT to MRMS in SA reveals that the longevity of this source of resistance is threatened by the current cropping practices in these regions. The newly released lentil cultivar PBA Hallmark XT is also rated MRMS to foliar ascochyta blight and appears to have the same source of resistance as PBA Hurricane XT. Therefore, the risk of ascochyta blight developing in PBA Hallmark XT is increased if this cultivar is sown into, or near, paddocks that have recently grown PBA Hurricane XT. Both cultivars may require podding sprays if disease is present during the growing season. Growers are urged to diversify their cultivar and crop rotations and monitor crops regularly for symptoms of disease.

In VIC, PBA Hurricane XT has retained its foliar moderately resistant (MR) rating for ascochyta blight as the shift in the pathogen population towards more aggressive isolates on PBA Hurricane XT has not been observed. Compared to SA, growers in VIC are not as reliant on a single cultivar such as PBA Hurricane XT in their farming systems, have longer rotations between growing lentil crops and the climate is generally colder and drier (pers. comm. Jason Brand, Agriculture Victoria). However, only four of the 40 A. lentis isolates tested in 2018 were collected from VIC lentil crops. Thus, the ability of isolates to infect PBA Hurricane XT present in the VIC population may have been underrepresented in the most recent testing. A. lentis requires cool weather and humidity for infection to occur where frequent rainfall events and a high load of inoculum in the form of infested lentil stubble can promote the likelihood of disease epidemics. Thus in VIC, the lower inoculum load coupled with suboptimal climatic conditions means that disease pressure for development of ascochyta blight in lentil crops is lower than that seen in SA.

Interestingly, the shift in the pathogen population has also seen a decrease in the number of A. lentis isolates capable of infecting the lentil cultivar Nipper, rated MRMS to foliar ascochyta blight, which is no longer widely adopted by industry. Nipper lost effective resistance to ascochyta blight in 2011, just four years after commercialisation and at the peak of its popularity comprised 30% of lentil cropping in SA (Davidson et al 2016). Less than 40% of the isolates collected in 2017 and tested in 2018 were capable of infecting Nipper, whereas two years ago all the isolates tested were capable of infecting the cultivar. This suggests that cultivar rotation has a strong effect on aggressiveness in the pathogen population structure by selecting virulent isolates to that cultivar. Growers are asked to consider whether cultivar rotation is possible in their farming system.

Table 1. Forty Ascochyta lentis isolates collected in 2017 were inoculated onto a lentil host differential set in controlled environment conditions in 2018. Entries in the table are the number of isolates per category.

Table 2. Percent change of Ascochyta lentis isolates capable of infecting lentil host differential set collected from lentil field trials and commercial crops in 2015 and 2017 then tested in 2016 and 2018 respectively in controlled environment conditions. Entries in the table are the number of isolates capable of causing ascochyta blight lesions and the percent change (increase or decrease) observed in testing conducted in 2018 compared to 2016. Lesions can range from S to MR reactions as identified in Table 1.

Stubble from fungicide-treated lentil crops can harbour A. lentis spores that can infect resistant lentil cultivars

Lentil stubble from a fungicide field trial at Maitland SA, infested with A. lentis, was collected in December 2017 from plots of treated and untreated  PBA Hurricane XT and PBA Flash. The stubble was placed into separate mesh bags according to cultivar and treatment type and left to weather outside on the SARDI Waite campus for three months. At the beginning of May individual pots of nine lentil cultivars were sown and placed around the mesh bags to capture spore splash from the stubble. Once seedlings were three weeks old, the number of lesions that formed on plants in each pot were counted and collected every week for 15 weeks (Figure 1). Lentil cultivars included those available commercially such as PBA Hurricane XT, PBA Hallmark XT (tested as CIPAL1422), Nipper, Northfield, Nugget, Flash, the two resistant lines ILL7537 and Indianhead, and the susceptible check Cumra.

Reassuringly, fewer lesions formed on lentil seedlings surrounding stubble from fungicide treated plots compared to untreated stubble. However A. lentis isolates exist in SA that can overcome the major sources of resistance. While there was a very low rate of infection (number of lesions) on PBA Hallmark XT, PBA Hurricane XT and Indianhead (resistant line, and presumed source of resistance in both the XT lentil lines used here), high selection pressure brought about by high cropping intensity of both of these cultivars could result in the selection of more aggressive forms of the pathogen, and loss of effective resistance, as was seen with the Nipper cultivar (Davidson et al 2016). Furthermore, as there was a significant number of lesions able to develop on a range of lentil hosts in the presence of stubble from fungicide treated plots, and considering the amount of stubble and spore production possible over an entire paddock, stubble from fungicide treated crops is still a major source of inoculum for future crops. 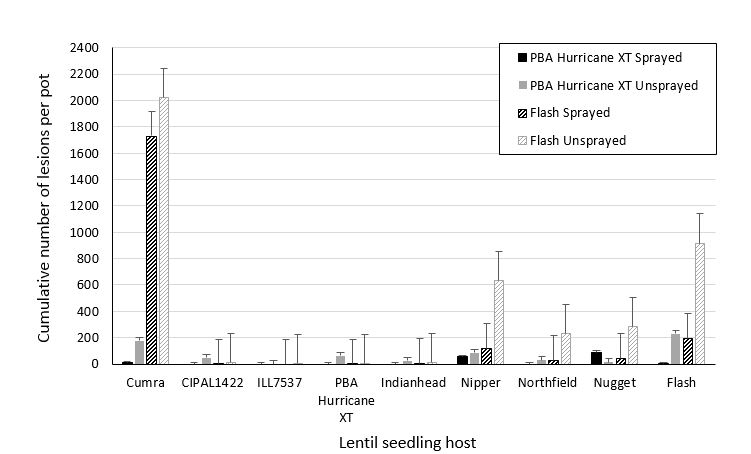 Figure 1. Cumulative number of ascochyta blight lesions over 15 weeks assessed on five lentil seedlings per pot adjacent to naturally infested lentil stubble from Maitland fungicide field trial. Stubble was from PBA Hurricane XT and Flash plots that had either been sprayed or not sprayed with Chlorothalonil every three weeks during the growing season. Vertical bars represent standard errors of the mean. CIPAL1422 = PBA Hallmark XT.

Faba beans are open pollinated which can lead to mixing of genetic material from grower retained seed. These genetic mixtures can lead to perceived changes in the resistance of a cultivar. The breeding program retains pure (‘ascochyta resistant’ or AR) lines for crossing and genetic studies, and these lines have been used to test the stability of ascochyta blight resistance in the commercially available cultivars Farah, PBA Samira and Nura. Forty isolates of Ascochyta fabae collected in 2017 from faba bean field trials and commercial crops (29 from SA, 10 from VIC, one from New South Wales (NSW) were tested in controlled environment conditions on a differential host set that included the commercial cultivars PBA Rana and PBA Zahra.

Faba bean cultivars have not changed their reactions to ascochyta blight since 2015 (Table 3) and screening of the isolates confirmed two pathotypes are still observed. Pathotype 1 is widely distributed in the southern region, and pathotype 2 which was identified in the mid-north of SA in 2013 is becoming established on the Yorke Peninsula and in the South East growing regions of SA and in VIC. In the presences of pathotype 2 cultivar Farah is moderately susceptible to ascochyta blight while PBA Rana and PBA Zahra are partially compromised. PBA Samira and Nura remain resistant to all pathotypes of A. fabae present in the pathogen population. For the newly released cultivars, the Group B herbicide tolerant PBA Bendoc is resistant to both pathotypes of A. fabae while PBA Marne, like PBA Rana and PBA Zahra, is only resistant to pathotype 1. A comprehensive fungicide strategy is required to control ascochyta blight in Farah and strategic fungicide applications at podding are required for PBA Rana and PBA Zahra to prevent pod and seed infection if significant disease occurs on the foliage earlier in the season.

Despite previous reports of higher than expected levels of ascochyta blight in PBA Samira, experiments using the ascochyta resistant line Samira AR confirmed that resistance in the cultivar is stable. It is presumed that reports of high levels of disease in PBA Samira are due to impure, genetically mixed seed being kept on-farm from past cropping seasons for sowing the following year. This ‘genetic drift’ effect can occur in open pollinated crops when cultivars with different levels of resistance are grown in close proximity. The A. fabae isolates collected from the field to examine the pathogen population dynamics did not cause high levels of disease however growers should always be vigilant in monitoring their crops for signs of disease. Growers should ensure seed kept for future plantings are isolated from other cultivars by a minimum of 200m to minimise the risk of cross-pollination diluting the resistance present in a cultivar.

Table 3. Forty Ascochyta fabae isolates collected in 2017 were inoculated onto a faba bean host differential set in controlled environment conditions in 2018. Entries in the table are the number of isolates per category. ‘AR’ lines are ‘ascochyta resistant’ selections made within the breeding program.

All chickpea cultivars in the southern region remain rated MS or S to ascochyta blight and require multiple fungicide sprays and a thiram-based seed dressing. Chickpea growers should carefully consider their risk of ascochyta blight infection and ability to effectively control the disease prior to choosing to grow the crop in southern Australia. Despite the dry season in 2018, there were still numerous reports of ascochyta blight in chickpea crops, likely due to the aggressiveness of this pathogen. The breeding program has a number of promising elite lines with improved resistance to ascochyta blight being tested in National Variety Trials (NVT) however these are not due for release until late 2019 and spring 2020.

All chickpea crops will need to be regularly monitored for ascochyta blight infection. 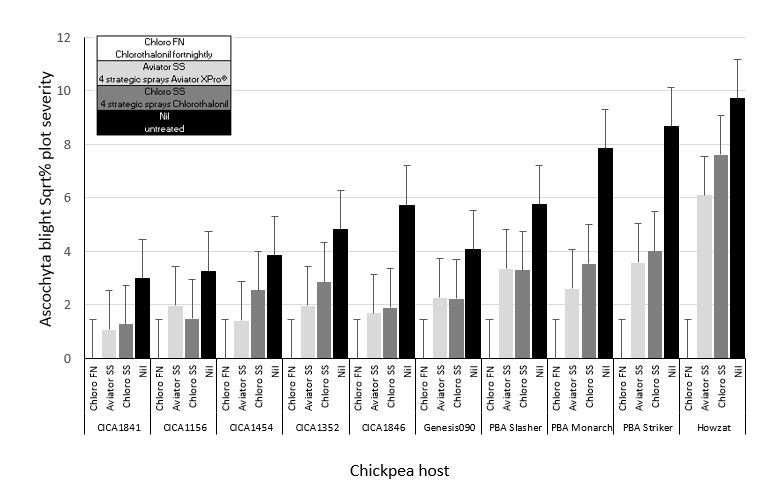 Susceptible chickpeas demonstrated a good economic return for four sprays of chlorothalonil, even in this dry season. In this low yielding trial, the MS line (Genesis090) only showed a marginal return for spray applications of either chlorothalonil or Aviator XPro®. The higher costs associated with AviatorXPro® make this product only marginally profitable in low yielding seasons, even when disease control is good. The latter fungicide may be better used in medium to high rainfall seasons with higher yielding crops, to ensure an economic return whereas the cheaper chlorothalonil is more economic in the drier lower yielding situations.

Why adhering to integrated ascochyta rabiei management strategy is now more important than ever: https://grdc.com.au/resources-and-publications/grdc-update-papers/tab-content/grdc-update-papers/2018/03/why-adhering-to-integrated-ascochyta-rabiei-management-strategy-is-now-more-important-than-ever

The research undertaken here is made possible by the significant contributions of growers and agronomists through trial cooperation and provision of diseased plant materials for the isolate collection as well as the support of the GRDC, the author would like to thank them for their continued support. Thank you to Dr Jeff Paull, University of Adelaide for comments on the manuscript and to the technical staff for maintaining trials.