Nitrogen (N) management remains one of the most important and risky decisions for wheat growers (Monjardino et al., 2015). Breeding for yield over the past six decades has resulted in cultivars that take up more N from soil (Sadras and Lawson, 2013). This means that N rates need to be adjusted to account for the increasing potential of new cultivars and to avoid mining soil organic matter reserves. Combined with cultivar choice, sowing date seeks to manage the dual risks of frost and heat. The sowing time shifts the thermal regime of the crop at critical stages, especially flowering. Both sowing time and cultivar also modify crop growth and N requirements. The interaction between N availability and temperature is largely unknown. The objective of this work was to study the effect of elevated temperature, sowing time, cultivar, and N rate on wheat yield.

Field trials were carried out at Hart and Turretfield in 2017. At each site, factorial experiments were established combining four sowing times, six wheat cultivars, and four N rates. Sowing dates were from early May to late June. Cultivars were Axe, Cobra, Mace, Scout, Spitfire and Trojan and were chosen to capture variation in N requirements and phenology based on consultation with the local leaders of the National Variety Trials. Nitrogen treatments consisted of an unfertilised control, and three fertiliser rates (50, 100 and 200kg N/ha as urea) split in two equal applications at early tillering and just before stem elongation. Treatments were allocated to a split-split-plot with sowing times in the main plot, cultivars in the sub-plots, and N rates in the sub-sub plots with three repetitions for each experimental unit.

To untangle the effect of temperature and confounded effects with photoperiod and other weather variables, open-top chambers were used to manipulate temperature in a subset of treatments (Figure 1). Heated treatments were established with ‘heating cubes’ (Figure 1) and unheated controls, in combination with three sowing times, two cultivars (Mace and Spitfire), and two N rates (0 and 100 kg N/ha). The timing of heating was from booting to 10 days after anthesis (in the first and second sowing time) and from 10 days after flowering till maturity (third sowing time).

Grain yield was affected by sowing time, location, N rate and cultivar (P<0.0001). Grain yield in Hart was higher than in Turretfield, by 1.2t/ha in early to mid-May sowing to 0.5t/ha in the mid to late June (Figure 2). Mace was the highest yielding cultivar (4.3t/ha in first sowing) and Spitfire was the lowest at the first (3.8t/ha) and last sowing (2.7t/ha). Axe did not show any advantage when sown early. Sowing early increased yield provided N availability (soil + fertiliser) was above 150kg N/ha. In Hart, N fertilisation increased grain yield in the first and second sowings (before June) while fertiliser did not affect yield in early or late June sowing. In Turretfield, where initial soil N was exceptionally high (279kg N/ha), N fertilisation reduced grain yield in the first sowing with no effect in the later sowings (Figure 2).

Figure 2. Grain yield as a function of sowing date and N rate at Hart and Turretfield in 2017. Data are averages across cultivars. Initial soil N was 111kg/ha at Hart and 279kg/ha at Turretfield.

The response of cultivars to N depended on sowing time and location (Figure 3, left panel). The early maturing Axe and the mid to long maturing Trojan increased yield in response to N, while the mid-season cultivars; Mace, Cobra and Spitfire did not. Scout did not respond to N up to 100kg N/ha and had a yield reduction with 200kg N/ha. For all cultivars, yield declined at a rate of 26kg grain/ha per day delay in sowing (Figure 3, right panel). Axe had lower yield than other cultivars in the first sowing probably due to untimely stress at critical stages.

Effects of temperature, and interactions with nitrogen Figure 4. Dynamics of maximum (Tmax) and minimum (Tmin) temperatures in heated treatments (dotted lines) and controls (solid lines) during the heating period for the three sowing times at Hart. 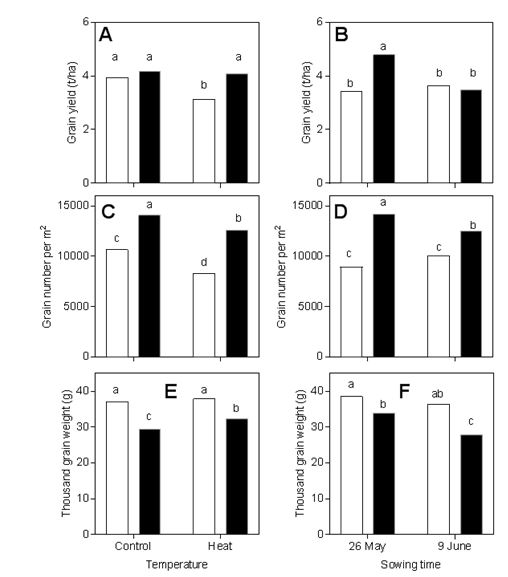 For crops sown on 23 June, Mace (3.46t/ha) out-yielded Spitfire (2.78t/ha). Increasing mean temperature by 1.7°C, reduced the yield of Mace by 15% but did not affect Spitfire’s yield (Figure 6). Nitrogen did not affect grain yield. Note of caution: In this paper, we are reporting only the results from the first year of experiments, given that the second experimental year is being processed. This paper is informative and should not be taken, on its own, as a guideline.

In this first year of experiments a combined effect of the temperature and N on grain yield and yield components of wheat was found. In general, the increase in mean temperatures due to the warming chambers produced a penalty in grain yield as a consequence of reductions in both grain number and grain weight. However, the yield penalty was not significant when warming occurred on fertilised crops indicating that N rate could be tailored to partially mitigate the effect of elevated temperature.

The research undertaken as part of this project is made possible by the significant contributions of growers through both trial cooperation and the support of the GRDC, the authors would like to thank them for their continued support. Special thanks are given to Sarah Noack and HART Field-Site group, J. Fernandez-Lopez, G. Sepulveda and B. Sleep for their support and collaboration with the field and lab activities. We also acknowledge the help of Longreach and Australian Grain Technologies for their provision of the germplasm.