Expansion of the pulse industry is seeing crops increasingly sown on soils that are challenging to plant establishment and growth. In these areas, pulses are often grown in the paddock for the first time, or have been infrequently grown and are therefore likely to benefit from rhizobial inoculation. In these situations, soil constraints such as acidity, particularly when combined with practices such as dry sowing or the application of pesticides to seed, can profoundly affect the success of nodulation and subsequent performance of the pulse crop. This paper examines the impact of the aforementioned factors on legume nodulation, dry matter and grain production and provides an overview of work being undertaken to improve the performance of rhizobial inoculants.

Acid tolerant strains of rhizobia – an update of progress

Rhizobia strain WSM-1455 (Group F) is used to make commercial inoculants for faba bean and lentil, and is sometimes also used on field pea. Recent assessments of nodulation by WSM-1455 in field trials illustrates the impact that decreasing soil pH (measured in CaCl2) has on the number of nodules per plant formed by this inoculant strain (Figure 1). Nodulation decreased rapidly below pH 6 and was negligible at pH 4. The significance (P<0.01, R2 = 0.88) of the relationship across a range of growing conditions and legume species demonstrates the key role acidity plays in limiting the nodulation of this legume group. There was no obvious difference between legume species within the inoculation group. The data indicate a maximum level of nodulation of about 75 nodules per plant. This is less than current industry guidelines for the satisfactory nodulation for legumes in this inoculation group (100 nodules per plant, Drew et al. 2012b) and indicates some revision of the benchmark is needed.

In a paper presented in the 2018 GRDC Grains Research Update proceedings, it was suggested that the opportunity to improve the performance of the commercial inoculant strain produced for bean and lentil was between pH 4.5 and 5.0. Based on the data shown in Figure 1, it appears this opportunity may extend further to pH 5.5, where decreased nodulation by WSM-1455 is evident. Below pH 4.5, nodulation will likely be compromised, regardless of the rhizobial strain used (data not shown) and soils must be limed to achieve satisfactory levels of nodulation. 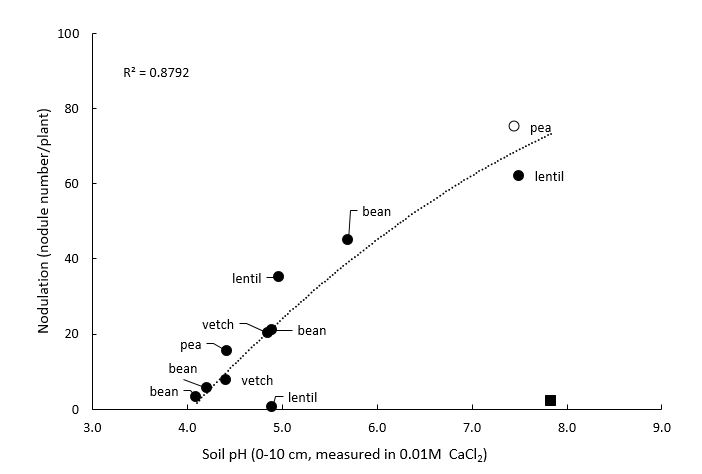 Figure 1. Relationship between soil pHCa (0-10cm) between pH 4.0 and pH 8.0 and the field nodulation (number of nodules per plant) of legumes inoculated with rhizobia strain WSM-1455. Value for pea at pH 7.5 (open circle) is an average of data collected from 12 sites with background rhizobia. All other values based on single sites. Value for pea at pH 7.8 (square) was unduly influenced by dry conditions at sowing and is excluded from the regression.

A cohort of rhizobia strains with improved acidity tolerance has been undergoing field testing since 2015. Rhizobial strains were initially selected for their ability to increase field pea nodulation in low pH (4.2) hydroponic solutions, the pH point where nodulation by inoculant strain WSM-1455 is known to be severely reduced in the test system. 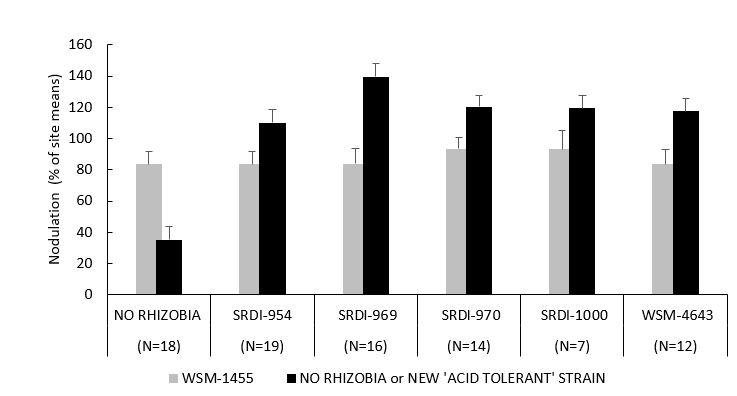 Most sites were responsive to inoculation, with large increases in nodulation (+48 to +104 percentage units above the uninoculated treatment) measured for the inoculated treatments. This result highlights the importance of inoculation to the establishment of viable faba bean, lentil and field pea crops on very acidic soils.

Grain yield of uninoculated and WSM-1455 treatments was on average 69% and 98% of the site means, respectively. Strain SRDI-969 performed best at 113%. 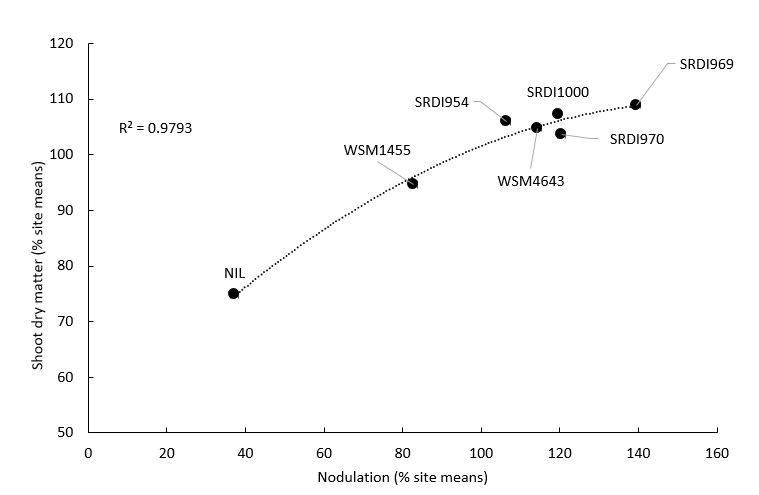 Figure 3. Relationship between nodulation by the different rhizobia strains and total above ground dry matter production (at mid pod fill) of legumes at acidic field sites. 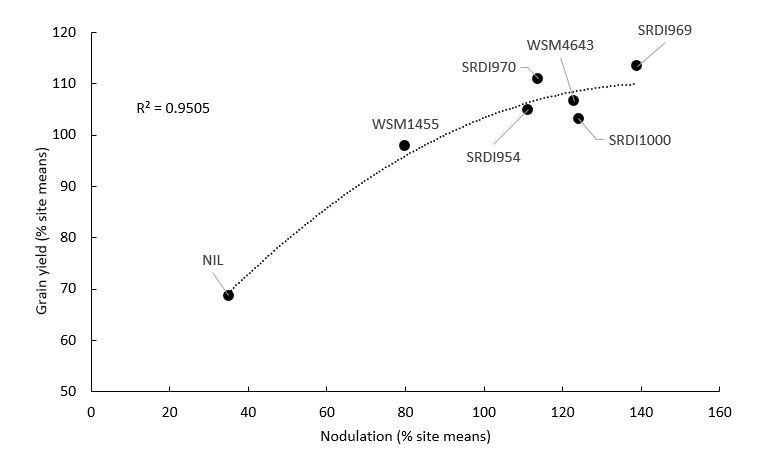 Figure 4. Relationship between nodulation by the different inoculant strains and grain yield.

Indications are that N-fixation has also been improved (up to 34 percentage units above WSM-1455 across five sites). This will be confirmed pending the completion of N-fixation analyses from 2018 trials.

Overall, the performance of the new rhizobia strains across a number of measures has been encouraging and there are good prospects for commercialisation. That said, it is expected that the benefits of the new strains to be limited below pH 4.5. This was borne out at two Victorian sites in 2018 (Stawell, pH 4.2 and Telangatuk, pH 4.1) where faba bean nodulation, even with the new rhizobia, was limited to less than 10 nodules per plant, which is well below the industry benchmark. At sites below pH 4.5, liming remains the most effective strategy to improve nodulation.

Improved rhizobia will still be of benefit where soils are limed, especially where there are moderately acidic sub-surface soil layers that are difficult to remediate due to the slow movement of lime down the profile.

What still needs to be done before the new strain is available commercially?

Colonisation and persistence of the strains in soil will be measured in 2019, in order to demonstrate they are as competent as WSM-1455 and to define the critical soil pH level where re-inoculation is needed, each time the crop is grown. Previously (2016 trials, pH 4.6 to pH 4.8) neither the commercial inoculant strain or the new strains were able to be consistently recovered from the soil, during summer following the pulse crop. Whether the new strains provide any benefit at higher pH is still to be determined.

The compatibility (N-fixation capacity) of the strains with the range of bean and lentil varieties available to growers is being tested. In particular, the effectiveness of the symbioses formed between beans and different strains of rhizobia varies considerably and may be significant in determining the strain recommended for release.

Increasing the rate of inoculant applied as a peat slurry to seed improves nodulation, where soil conditions at sowing are suboptimal. An example from 2018 is shown in Figure 5, for chickpea sown into a sandy soil that remained dry for 18 days after sowing. The moist peat and peat granule inoculants were produced at SARDI. At this inoculation responsive site, nodulation increased from 2.5 to 5.6 to 8.3 nodules per plant with each doubling of inoculation rate. For this experiment, a peat granule was also produced to help understand if the application of rhizobia in furrow is as effective as seed application and to improve our understanding of the potential of granulated inoculants. Past efforts (Denton et al. 2009), as well as our more recent work, have been affected by variations in the carriers (peat vs. clay) and the varying number of rhizobia in commercial granules, necessitating the production of an ‘experimental’ granule by our laboratory.

The experimental peat granule produced nearly seven times the number of nodules produced by the lowest peat on seed rate (Figure 5). Most of the increase was in lateral root nodulation, probably the result of the rhizobia being more widely distributed in the soil. The result demonstrates the potential of a ‘high count’ granule to improve nodulation. The performance of two commercial granules in the trial (data not shown) was comparable to the experimental granule. However, in other trials the number of rhizobia in commercially produced granules has varied and almost certainly affected the consistency of their performance. It points to the need for improved quality control, similar to that mandated for moist peat inoculants.

The number of nodules on chickpea was lower than what we have previously measured on bean/pea/lentil. Further work is needed to determine optimal nodule number for chickpea. 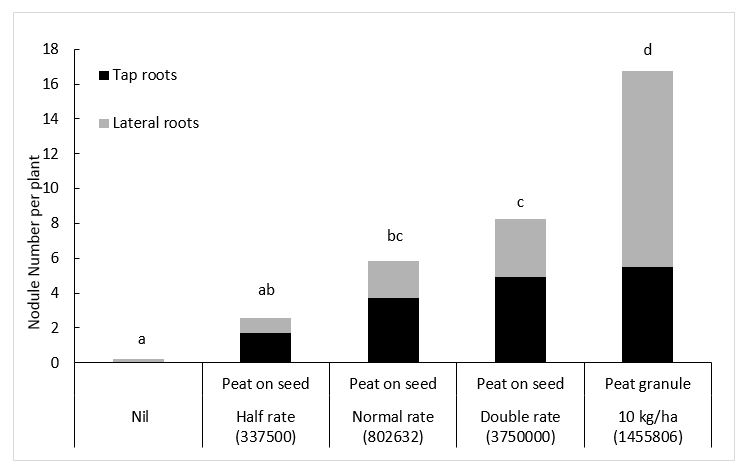 Figure 5. Effect of inoculation rate and formulation on chickpea nodulation (nodule number per plant) at Lameroo, SA. Number of rhizobia per seed indicated in parentheses under inoculation rate. Commercial inoculants at manufacture, applied at normal rate deliver about 600,000 rhizobia per chickpea seed. Letters above columns indicate significance (P<0.05). Columns marked with the same letter are not significantly different.

Improved nodulation in response to increased inoculation rate is commonly reported (Denton et al. 2013, Roughley et al. 1993) and provides a practical way of improving nodulation where legumes are sown for the first time, especially on hostile soils. However, a note of caution. Growers have provided feedback that seeder blockages have resulted when they have increased the inoculation rate, so we suggest testing a small test batch of seed first to avoid such problems.

Particular care needs to be taken where rhizobia are applied with pesticides on seed, especially where it is to be sown in suboptimal soil conditions. This was clearly shown in a trial at Minnipa (Eyre Peninsula, SA) in 2018. Seed of field pea (cv. Oura) was coated with the fungicide P-Pickel T® (PPT, containing thiram and thiabendazole) at commercial rates, or left uncoated (control). Commercial peat (WSM-1455) or freeze-dried inoculant was applied to pesticide-coated and uncoated seeds and sown into a dry sandy soil (8% g/g moisture) either immediately (within 2hr of inoculation) or 24hr after inoculation.

The only two treatments that resulted in a substantial number of nodules per plant were peat formulations applied immediately before sowing or 24hr before sowing, in the absence of PPT (Figure 6). Average nodule number was much lower on pea plants that were inoculated with a freeze-dried formulation, even where seed was not treated with PPT (Figure 6).

These reductions were partly the result of fewer rhizobia surviving on the seed (data not shown).

Where pesticide application is necessary, granular rhizobial inoculant or a peat slurry in furrow may provide a better option despite concerns about granule product quality, reducing direct exposure of the rhizobia to the pesticide. Figure 6. Effect of P-Pickel T® fungicide, formulation type (FD = freeze-dried, and peat) and time between inoculation and sowing (0hr or 24hr) on the nodulation of pea cv. Oura, Minnipa, SA, 2018. LSD is the least significant difference at P<0.05.

There are reasonable prospects that a strain of rhizobia with improved acid tolerance will be released for faba bean and lentil in 2021.

Where a rhizobia strain with improved acidity tolerance is combined with good inoculation practice, it should be possible to reduce the symbiotic constraints to faba bean and lentil production between pH(Ca) 4.5 and 5.5. None of the rhizobia strains tested thus far appear to be able to persist in soil below pH(Ca) 5.0, so re-inoculation will be essential each time the crop is grown. Further work is underway to clarify strain persistence.

Regardless of the rhizobia strain used, where sowing conditions are suboptimal and the paddock likely to be responsive to inoculation, growers should consider increasing their inoculation rate and avoid exposing the rhizobia to incompatible pesticides, where it is practical to do so.

Improved rhizobia should be seen as an accompaniment, not a replacement for liming. Liming remains important to prevent further acidification and is critical to the longer term sustainability of the farming system. Even where the improved rhizobia are used, nodulation will be suboptimal below pH 4.5 and liming remains the most effective strategy to improve nodulation. Plant root growth will also likely benefit from the addition of lime and improve overall performance of the pulse crop.

Granulated rhizobial inoculants have produced some good results in dry and/or acidic soils and could provide a viable alternative to peat on seed, particularly where pesticides are an issue. Increased levels and consistency of rhizobial number in commercial granules would see them more widely recommended and used.

Although the impact of seed-applied fungicides such as PPT may not be as detrimental to legume nodulation when conditions at sowing are not stressful (e.g. adequate soil moisture), the combination can be detrimental in stressful sowing conditions. In this case, separation of the inoculant from the fungicide, by using a granular formulation may be a better option. Where peat slurries are applied to seed treated pesticides, inoculant manufacturers recommend the seed is sown within four hours after inoculation for some pesticides. These guidelines should be strictly adhered to.

The research undertaken as part of this project is made possible by the significant contributions of growers through both trial cooperation and the support of the GRDC — the authors would like to thank them for their continued support.

Some of the work presented in this paper was co-funded by the South Australian Grains Industry Trust (project S716).