Herbicide resistance in the South-East of SA

Table 1. Extent of resistance in randomly collected annual ryegrass samples (n = 65) from crop fields in the South-East of SA in 2017. Resistance is defined as >20% survival.

Biology of annual ryegrass in the HRZ

There are anecdotal comments from growers and advisers that the ecology of annual ryegrass is different in the HRZ compared to other growing regions. Trial data from other regions suggests annual ryegrass populations in continuously cropped regions have changed their emergence pattern to greater dormancy, with some of the population not emerging until after sowing. Where pre-emergent herbicides are the main control option, increased dormancy will reduce their efficacy. Some preliminary research from the University of Adelaide (UA) suggests that the changes in dormancy in annual ryegrass are less evident in higher rainfall regions than in medium rainfall regions (Figure 1).

Annual ryegrass populations tend to be larger in the HRZ and if seed dormancy has not changed, then later emergence of weeds is likely related to high weed seedbanks and longer growing seasons. Rainfall tends to be higher in spring in the HRZ than in other growing regions and temperatures stay lower for longer. Both of these will encourage non-dormant seeds in the seedbank to germinate. In addition, weeds that survive control tactics in crops in the HRZ are able to take advantage of the extra moisture and cooler conditions to set more seed. Pre-emergent herbicide performance in the HRZ

Trials and grower experience have consistently found that pre-emergent herbicide performance can decline quickly during the season in the HRZ. Activity of herbicides with short persistence in the environment, such as Boxer Gold® and Butisan®, can fall away quickly resulting in high weed populations later in the season. For this reason, products with longer residual activity are preferred.

Trial work conducted as part of GRDC project UA00113 examined the performance of various pre-emergent herbicide options for annual ryegrass control in 2011 and 2012 in six trials across higher rainfall districts of SA, Victoria and NSW. These trials showed that while all herbicides can perform adequately, single herbicide applications were more likely to fail than mixtures or sequences (Figure 2). The best performing options were mixtures of Avadex® Xtra with Sakura® and sequences of TriflurX® or Sakura® followed by Boxer Gold® early post. These are likely to be the best pre-emergent herbicide approaches for annual ryegrass control in wheat in the HRZ. 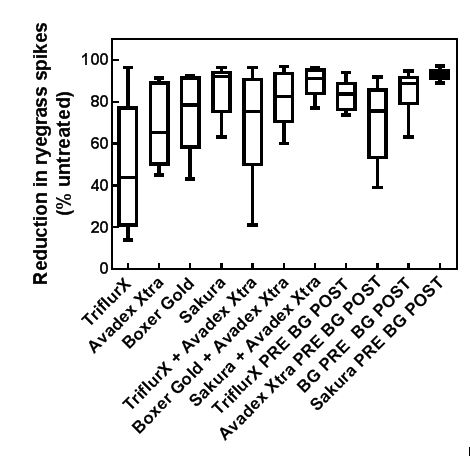 Figure 2. Performance of pre-emergent herbicides across six trials at Manoora, Yarrawonga and Wagga Wagga in 2011 and Saddleworth, Lake Bolac and Wagga Wagga in 2012. Data are presented as box and whisker plots. The line across the box is the mean of all trials. The top whisker is the best performing trial and the bottom whisker the worst performing trial. BG = Boxer Gold®.

Harvest weed seed control (HWSC) is a set of practices that remove or destroy weed seeds that are collected by the harvesting operation. Some of these practices can be difficult to use in the HRZ. Biomass of cereal crops is often large, creating an unacceptable fire risk for narrow windrow burning. Frequently, the whole paddock will burn rather than just the windrows, producing a poor result. Also cooler and moist conditions encountered can make it difficult to achieve hot enough burn.

Table 2. Annual ryegrass populations at 60 days after sowing (DAS) of the following crop after use of the iHSD at harvest in the previous crop.

In the HRZ, annual ryegrass matures and sheds a significant amount of seed before wheat maturity and this worsens further south as the growing season gets longer (Table 3). However, shedding of annual ryegrass seed can be reduced by later sowing and harvesting lower can increase the amount of annual ryegrass seed being captured by the header. While still reducing weed numbers, the benefits of HWSC are not likely to be as great in the HRZ as they are in other regions.

Table 3. Amount of annual ryegrass seed shed in HWSC trials in the HRZ prior to harvest.

Table 4. Effect of time of sowing of wheat on annual ryegrass plant numbers and seed heads at Lake Bolac in 2016.

A long-term trial at Lake Bolac has run since 2012. This trial initially examined the value of pre-sowing cultural tactics on annual ryegrass populations. These were retained stubble, burning stubble, incorporating stubble and a mouldboard plough operation followed by retained stubble. These were each followed in crop by three different intensities of herbicide management (Table 5). The trial showed that the mouldboard plough operation reduced establishment of annual ryegrass by more than 95% in the year that it was implemented. However, the rapid increase in ryegrass numbers in subsequent years meant by 2014 there was no difference in annual ryegrass populations between the pre-sowing cultural treatments.

Table 5. Herbicide and other treatments used for the management strategies at Lake Bolac between 2012 and 2017. 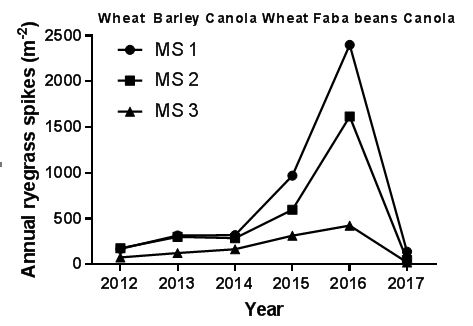 Figure 3. Annual ryegrass seed heads at harvest from 2012 to 2017 at Lake Bolac for the three different management strategies (MS1, MS2 and MS3) employed. See Table 5 for details of strategies.

The University of Adelaide

The research undertaken as part of this project is made possible by the significant contributions of growers through both trial cooperation and the support of the GRDC – the author would like to thank them for their continued support.