Grain sorghum is the most important summer cereal crop in northern NSW, providing important rotational, logistical and cash flow benefits for growers in the region.

Many in the industry would agree that climatic variability in the past 10 years has seen an increasing trend of reduced crop yields, and sometimes failure, as a result of sorghum crops flowering and filling grain in periods of extreme heat and moisture stress.

GRDC, NSW DPI and the University of Queensland have partnered in research since 2014 to evaluate options for sorghum agronomic management that challenge our current practices. This includes challenging our accepted views on ideal sowing time and hybrid selection by comparing alternative practices. Such practices could be readily adopted by growers using current genetics and technology.

Research in recent seasons (2017-19) has focused on the possibility of sowing sorghum earlier than traditionally accepted to evaluate the impacts of cold soil temperatures and early spring conditions on plant establishment, growth and yield. Results from 2018-19 are not available at the time of publication (January 2019) as research trials have not yet been harvested.

A number of factors that can impact on final plant establishment were included in the research. These included seed quality (germination and vigour), seeding depth, seed size and seedbed moisture.

Three experimental sites were sown in northern NSW in 2017-18; Gurley (south east of Moree), Mallawa (west of Moree) and Breeza on the Liverpool Plains. At each of these sites, three treatments were included:

Table 1. Summary of weather conditions for sorghum trials sown during the 2017-18 season. Soil temperature is at 8 AM EST across seven days after sowing.

A split-split plot design was used at all sites. Data was analysed using the REML procedure in ASReml-R and the level of significance for least significant difference (LSD) testing was set at 5%.

What impact does early sowing have on plant establishment in the field?

Sowing super early with very cold soil temperatures (8.4 – 10.8°C) at the NSW sites of Gurley, Mallawa and Breeza demonstrated that plant establishment can be less than half of the sown population target of 5 plants/m2 (Table 2).

The resulting plant stands can also be slow to emerge. For example, there were no plants present until 3 weeks post sowing at Breeza for the super early and early sowing times. Plants were still emerging up to 6 weeks post sowing, however, were patchy and prone to weed infestation. In these experiments, weeds were controlled using mechanical means to remove this possible influence on yield.  This would not be considered feasible by many growers.

There was no difference in the establishment of hybrids. At the Mallawa site, Agitator had significantly lower establishment as a result of poor seed quality (data not shown).

What impact does soil temperature have on emergence in a controlled environment?

In the field, seeds are exposed to these conditions which means periods of “suitable” and “unsuitable” soil temperature for germination within a 24 hour period in some cases.  As such, super early sowing of sorghum (August) produced a stop/ start growth pattern, resulting in slow and delayed emergence.  To further investigate factors which are driving this result, a controlled environment experiment was also established.

Seed of the 9 hybrids used in the field trials were separated using a 2.5 mm sieve to achieve two different seed lots; small (<2.5 mm) and large (>2.5 mm). This seed was used to establish an experiment where seeds were sown at 2 different depths, 3 and 7 cm in small pots.

The pots were then kept in controlled temperatures of 10, 14 and 18-20°C, the latter seen as ‘ideal’, and emergence dates for each seed were recorded. When no more plants emerged, the remaining seeds were dug up to investigate if they had germinated or not.

At each temperature, a percentage of seedlings germinated but never reached the surface (Table 3). These results indicate that seed vigour as well as germination is important, and this becomes more important as you plant in less ideal conditions. At 10°C, over half (57.3%) of the seeds germinated, however, the temperature was too low to allow sufficient growth to reach the soil surface. Of those seeds that germinated, twice as many failed to reach the surface at 14° C (15.1%) compared to where seeds were maintained at our ideal sowing temperature (7.5%).

Does seed size and sowing depth have an impact on emergence?

Choosing to sow sorghum into earlier than ideal soil temperatures and conditions means we need to consider what other factors could influence the final establishment.

Information about seed germination, sowing depth and seed size can be used to improve establishment. Seed germination is provided by seed companies as a guaranteed minimum and can easily be tested in a petri dish.

The results showed that both seeding depth and seed size had an effect on emergence. Deep (7 cm) planting reduced total emergence at all temperatures by approximately 9%, and this reduction was the same at every temperature (Figure 1a).

Can we move the flowering window earlier to avoid heat stress?

Super early sowing generally means that a higher number of days are needed to reach flowering, as growing conditions are cooler. Therefore, sowing earlier does not always mean the crop will flower earlier.

At Breeza, there was very little impact of sowing time on days to 50% flowering, with all three times of sowing flowering around the same time (early to mid-December).  This is likely due to emergence being slow and over an extended period at this site, for the super early and early sowing times.

The spread of flowering times between hybrids also reduced with the later sowing dates, from 16 to 11 days.  There was a significant hybrid effect on flowering, with MR Buster and Agitator flowering much earlier than the other hybrids. MR Apollo was the slowest to reach flowering.

Sowing depth had no significant impact on flowering date at either the Mallawa or Gurley sites. At Breeza, the shallow sowing depth was quicker to reach 50% flowering than the deep sowing (data not shown). What was the impact of varying sowing time, seed depth and hybrid selection on final grain yield?

Grain yields (at 0% moisture content) ranged from a low of 1.3 t/ha on average at Mallawa, to 3.2 t/ha and 3.4 t/ha at Gurley and Breeza respectively, averaged across treatments.

At Breeza, yields were generally higher from the super early (early August) and early (late August) sowing times compared to when plants were sown in September, even though established plant populations were only two thirds of the plant stands achieved with the standard sowing time in September.

Even though established populations were reduced and early growth was delayed, the final grain yields which resulted (from the early sowing times) were better than waiting for the standard sowing time to occur, in two out of three situations during this season (Figure 3). A large proportion of these results is attributed to the fact that sorghums plasticity in growth means additional tillers compensate for lower plant stands. There was a significant interaction between hybrid and environment.

Nine hybrids were included in the experiments with the expectation that there may be some difference in genotype cold tolerance. However this was not seen, in this season. Hybrid responses to sowing time were variable across sites (Figure 2). It must be noted that all hybrid seed was produced from different locations and had different production histories, so there are complicating issues such as seed germination and vigour. 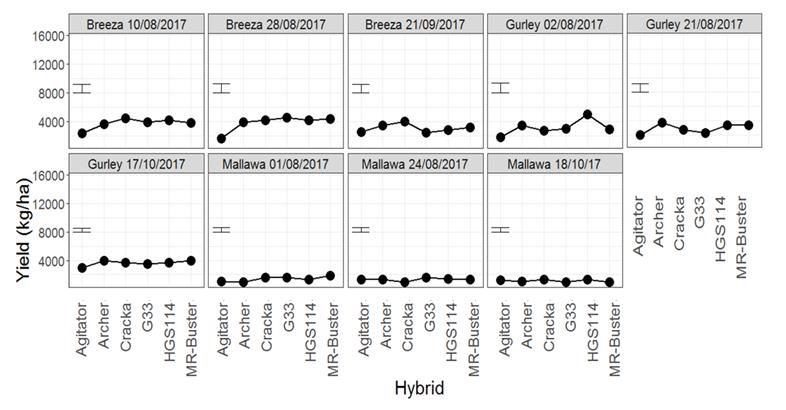 Growers currently have access to a range of tools to vary the time of flowering, and therefore the conditions experienced, by their sorghum crops during grain fill. Some of these tools are, however, accompanied by an increased level of risk of poor plant establishment.

Sowing in early and late August at all three sites showed that sorghum can be established at sub optimum soil temperatures and handle some cold (<0°C) conditions. However, this early sowing time came at a significant establishment cost. Further, evaluation of the impacts of cold soil temperatures, particularly in the range of 12- 14°C, as well as the effects of severe frosting on plant growth and survival are needed.

At Mallawa and Gurley, establishment was less than half that which occurred in the standard sowing time. Therefore, a lot of seed never contributed to grain yields but an input cost had been incurred. The impact of drying seedbed soil conditions at these two sites needs to also be considered.

In contrast, at Breeza, where soil moisture was controlled through irrigation, establishment losses from the super early and early (late August) sowing were still significant. However, establishment losses were not as great as the other two sites, when compared to the standard sowing time.

At all three sites, viable plant stands were established. At Mallawa and Breeza, the two early sowing times resulted in superior yields compared to the standard sowing time. At Gurley, the opposite was observed, most likely due to the timing of in-crop rainfall.

Flowering data has shown that it is possible to move the flowering and grain fill window to earlier in the season, provided that the time taken for crop establishment is not excessively prolonged by cool early growing conditions, as occurred at Breeza. At Breeza, there was little difference in days to flowering between all three sowing times even though sowing time varied from 10th August to 21st September.

With respect to cold tolerance, it was not possible to detect many differences between hybrids in this year’s field trials due to confounding background effects including seed production and quality attributes.

In 2017-18, across the three field sites, benefits from varying sowing depth in order to seek warmer soils for early sowing conditions were minor. While differences in soil temperatures between the two depths either shallow or deep were detected, this did not equate to improvements in plant establishment or grain yield at two of the three field sites.

Seed size and sowing depth did have an impact on sorghum emergence. Small seed had 7% lower emergence than large seed. Sowing seed deep also reduced emergence by 9%. These are relatively small differences, however, these differences could still warrant consideration since many small factors can add up.

Early sowing could also lead to yield benefits by avoiding overlap of flowering and peak heat periods, but also a possible increase in the cropping intensity through providing additional opportunities for double cropping.

These results should be considered as preliminary as they are the results of three experimental sites in one season. This research is being continued for coming seasons to allow further validation of these preliminary findings.

The research undertaken as part of this project is made possible by the significant contributions of growers through both trial cooperation and the support of the GRDC and NSW DPI, the author would like to thank them for their continued support.

In particular thanks to our trial co-operators; Mark & Wendy Manchee, Gurley; Jason & Geoff Hunt, Mallawa, Geoff Manchee and JR McDonald Bogamildi, and Scott Goodworth NSW DPI Breeza for their assistance with the sites.

Thanks to Delphi Ramsden, Alice Bowler and Simon Tydd for technical assistance and to Tendo Mugerwa and Guy McMullen for editing the paper.

Thanks to the seed companies: Pacific, Pioneer, Nuseed, Elders, Heritage and Radicle for supplying seed.