This research evaluates the yield and economic benefits of using a rock crushing machine, on ironstone sheet soils in the Lake Grace area. The Reefinator is most commonly used by growers on shallow laterite soils. Ironstone soils have high phosphorous fixing and low water holding capacity. Shallow ironstone sheets restrict rooting depth and general soil workability. There has been interest in the economics of this operation in the Lake Grace area for several seasons.

The site selected for this trial is characterised by scattered areas of ironstone gravel and sheets of cemented ironstone beneath shallow topsoil. Two areas of heavy ironstone sheet were identified as NE and SW blocks by visual observation of pasture cover and surface stone in November 2017. The trial compares alternate 12m wide strips treated on 22 February 2018, with untreated (control) strips over 15 replicates of 470m long passes. Topsoil (0-10cm) was sampled on 16 March from three paired sampling points across the site. Latrobe barley was sown on 1 May with 10kg/ha of phosphorus (P).

Nine paired sample (PS) points across the paddock shown in Figure 1 were monitored during the season for plant number, tiller number, head density, tissue testing and calibrated NDVI measurements at early stem elongation (Z31) and flowering (Z65). The site was harvested on 13 November using the grower’s header and a weigh trailer to measure yields from 300m runs in selected areas over the most severe laterite as shown by the white rectangles in Figure 1. Yield mapping calibrated with weigh trailer data was used to measure yield responses in more detail. Paired sample points were located over a range of depths to laterite.

Several measurement approaches were used in this study, summarized in Table 1. An overarching limitation is the inherent variability across the paddock. There are areas identified in the paddock that are responsive to laterite crushing and more productive areas that are not responsive.

Table 1. Summary of approaches to measure the effect of crushing laterite on crop yield in a paddock with a variable distribution of ironstone.

Soil test results taken shortly after rock crushing showed no notable differences between paired treated and untreated plots. However, samples taken at a site with ironstone sheet at 0-3cm showed a high phosphorous buffering index (PBI) of 78 in both treatments compared to sites with ironstone sheet below 3cm depth that had a lower PBI of 28 (Table 2). Colwell P varied between 22-31 across the site which suggests that the high PBI of the shallower topsoils may reduce available P (Table 2).

The 2018 season in Lake Grace was a decile one year, with 57mm January to April and 131mm May to October. In-season dry matter (kg/ha) was calculated from NDVI using four calibration cuts (R2 = 0.91). Paired sample points are grouped on the average depth of ironstone sheet in Figures 2-3. Data recorded at late tillering (Fig. 2) and early stem elongation (Fig. 3) show a consistent pattern with treated plots performing better only in areas of shallow ironstone sheet (0-3cm).

Treated plots had lower dry matter than adjacent untreated plots in areas where ironstone was more than 5cm deep. Moderate wind erosion after seeding caused some furrow infill in treated plots where the ironstone sheet was deeper (>3cm). This likely hindered emergence and establishment, though plant densities were not significantly different at paired sample points. 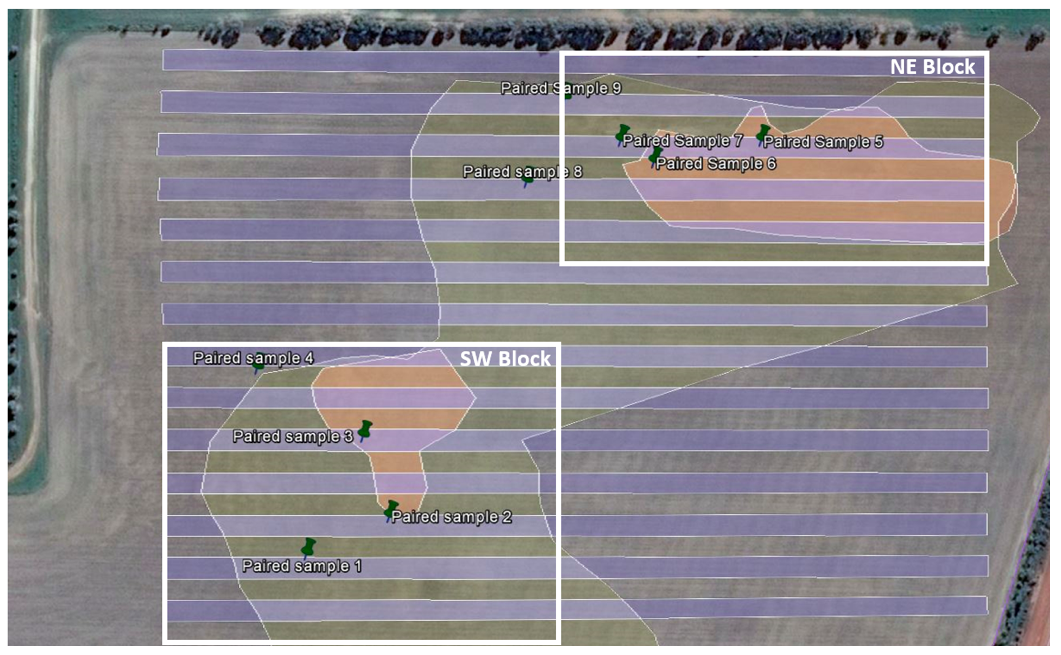 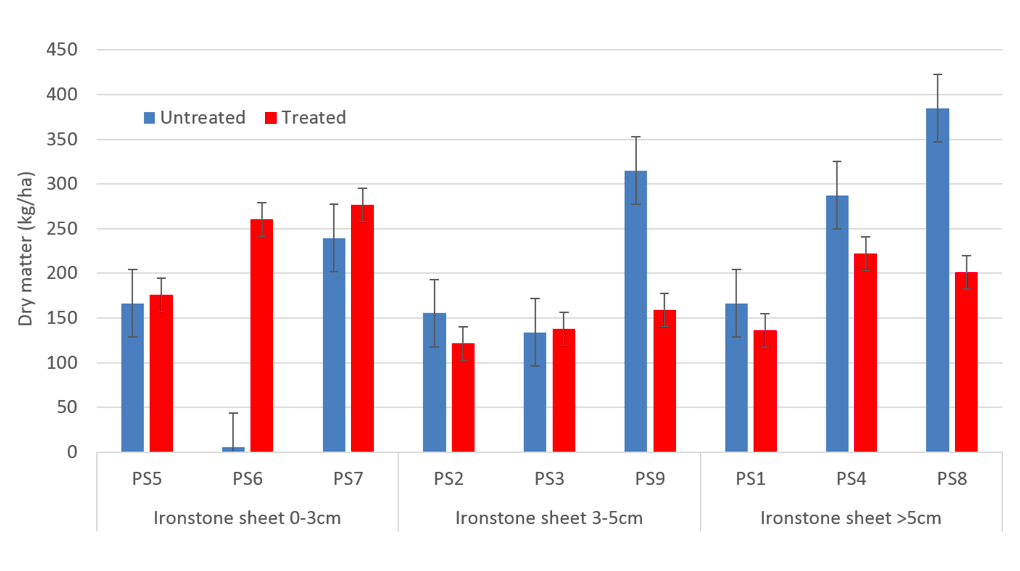 A weigh trailer measured grain yield from whole treatment runs (300m long) in the NE and SW blocks. There was no difference in the overall mean yield of whole plots between treatments. Treated plots averaged 2.95t/ha while untreated plots averaged 2.96t/ha. However when comparing adjacent individual plots, any yield benefit of treatment corresponds with areas of shallow ironstone sheet, but only in the NE block as shown in Figure 4.

Yield map data was calibrated from weigh trailer data. Yield mapping identified poor yielding areas of the paddock which reflected the heavy ironstone areas of the paddock (shaded orange in Fig. 1), with a NE block and a SW block. Within these blocks, comparisons between treatments identified that the NE block overlying more severe shallow laterite was more responsive to laterite crushing than the SW block (Fig. 4). The SW block had less severe ironstone laterite indicated by higher overall yields and a nil or negative response to treatment (Fig. 4).

Short runs (about 15m) of yield data points adjacent to paired sample points were used to analyse the effect of laterite crushing in areas of the paddock grouped by ironstone sheet depth (Fig. 5). Even in these focused small areas, the general trend of small scale variation was evident and when grouped, only small differences in yield are seen in Fig. 5. 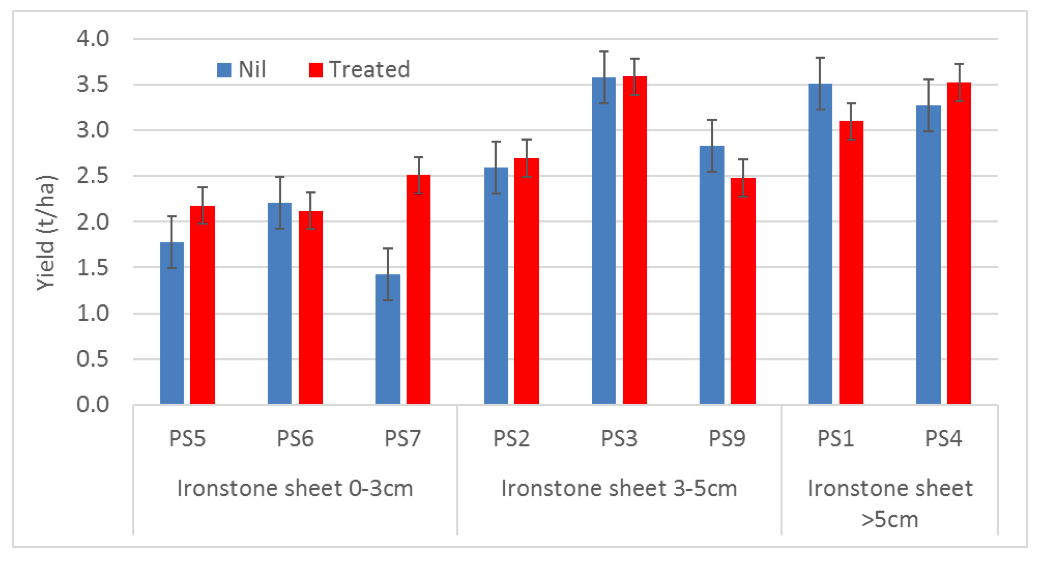 Results vary depending on the scale of comparisons, depth of topsoil and severity of the laterite sheet. Only by small scale comparisons of adjacent treated and untreated sections on the worst areas of the paddock can a more confident yield benefit be observed. Table 2 shows that a grain yield increase of 0.1 to 0.2t/ha can be found on selected shallow laterite areas.

An economic analysis using modified inputs and costs with the Ranking Options for Soil Amelioration tool (ROSA) indicates that the return on crushing shallow laterite is negative. Using a five percent discount rate and a $400/ha cost, a 10 per cent yield improvement on 2t/ha generates a near breakeven return and Benefit Cost Ratio of 0.9 over 10 years. At five per cent yield increase as indicated by the first year of results on shallow laterite at this site, the return is worse at 0.5 BCR. Discounting negates the cumulative benefit of small annual yield increases.

Several methods were used to evaluate this experiment. Intense variability across the site from uneven laterite distribution reduced the confidence of results from each yield assessment method. There may be a small yield benefit of about 0.1 to 0.2t/ha from laterite crushing on shallow laterite areas. In this trial, areas where the ironstone was more than 5cm deep were either unresponsive to treatment, or treatment reduced production. At the observed yield responses, there is negligible return on investment after ten years. We acknowledge that there are other reasons for crushing laterite such as machinery wear and more convenient working patterns. The trial design dictates that crushing machinery worked in a linear up and back pattern, not the usual cross working which is more effective for thorough breakout. Given the cost of the operation, only areas of surface laterite should be treated.

Thanks to the host grower Kevin Naisbitt for establishing the trial and managing paddock operations.