Herbicide resistance is a major concern for northern region crop production due to the increasing frequency of resistance in key weeds. Non-herbicide weed management alternatives are needed to delay the spread and onset of further herbicide resistance (Walsh et al., 2013). One such alternative is harvest weed seed control (HWSC). Harvest weed seed control (HWSC) refers to a suite of management practices - all of which target the seed of weeds present at harvest and borne at harvest height (typically around 15cm above ground height, depending on header set-up).

Current HWSC systems include narrow windrow burning, chaff tramlining/chaff lining, chaff carts, bale direct and seed destruction (Walsh et al. 2013). Chaff lining and chaff tramlining have potential for wide-spread adoption in northern Australia owing to their low cost and ease-of-implementation relative to some other HWSC practices. Chaff tramlining is the practice of concentrating the weed seed bearing chaff material on dedicated tramlines in controlled traffic farming (CTF) systems, typically using a chaff deck to deposit chaff into 2 lines (one per wheel track). Chaff lining is a similar concept, where the chaff material is concentrated using a chute into a single narrow row between stubble rows and directly behind the harvester (i.e. not specifically onto the tramlines).

Anecdotal reports suggest weed seeds decay rapidly when deposited in chaff tramlines/chaff lines, but so far this remains scientifically unsubstantiated. The experiments described in this study were designed to:

Field experiments were set up at Wagga Wagga in NSW and Irongate in southern Queensland. For the experiment in Wagga Wagga, seeds of annual ryegrass (ARG), brome grass, and wild oats were placed in bags under chaff lines of wheat, barley, and canola. For the control treatment, bags were placed next to the chaff line. For each crop type there were 4 replicates for each weed species. Bags of weed seeds were put out in December 2017 and removed in April 2018.  Seeds recovered from the bags were used in a germination test lasting 21 days.  The number of germinated and filled (i.e. embryo present) seeds was used to calculate weed seed survival as a percentage of the seed initially placed into each bag (100 seeds per species per bag).

For the study at Irongate, near Mount Tyson in Queensland’s eastern Darling Downs, two field experiments were set up following the 2017 winter crop harvest. Chaff was directed onto tramlines during barley harvest using Draper (conventional) and Shelbourne (stripper) fronts. Bags containing seeds of annual ryegrass, wild oats, turnip weed, and common sowthistle were placed under the chaff tramlines. For the control treatment, bags containing weed seeds were placed outside of chaff tramlines, in a nearby part of the paddock. For each trial (Shelbourne and Draper) and each sampling time there were 3 or 6 replications (for the control and tramline treatments, respectively) for each of the four weed species tested. The bags containing weed seeds were originally placed in the field in November 2017 and were removed on two occasions; in April 2018 and September 2018. Seeds recovered from the bags were used in a germination test lasting 28 days, where the number of germinated and filled (i.e. embryo present) seeds was used to calculate weed seed survival as a percentage of the seed initially placed into each bag. For common sowthistle, germination alone was used to calculate seed survival. The total seed initially placed in each bag was 133/bag (ARG), 106/bag (wild oats), 200/bag (turnip weed), and 250/bag (sowthistle). The number of seeds used for each species differed to account for variation in initial seed viability among the species, so that there would be 100 viable seeds per packet. 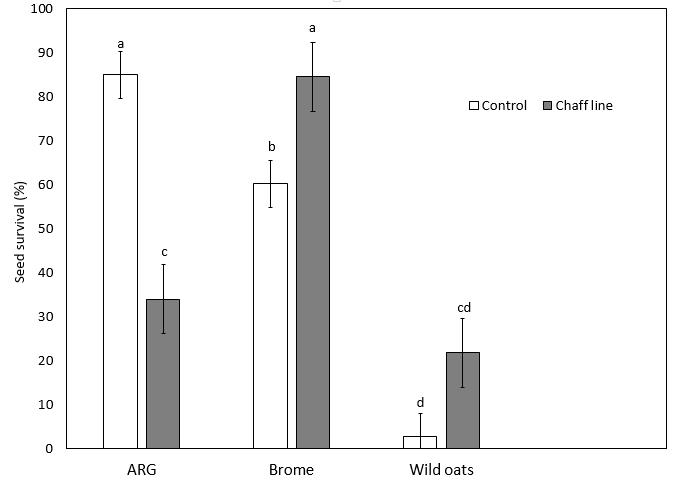 Figure 1. Survival of weed seeds (% of initial viable seed) placed under a canola chaff line compared with the control treatment (non-chaff line) at Wagga Wagga, NSW. The l.s.d is indicated using the error bars. Predictions with the same letter are not significantly different 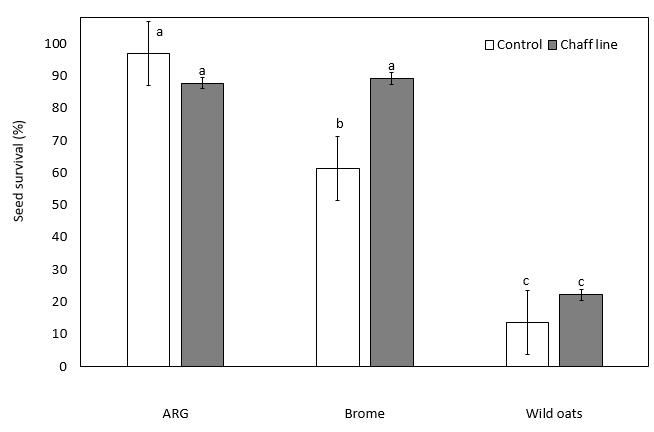 Figure 2. Survival of weed seeds (% of initial viable seed) placed under a wheat chaff line compared with the control treatment (non-chaff line) at Wagga Wagga, NSW. The l.s.d is indicated using the error bars. Predictions with the same letter are not significantly different. Figure 3. Survival of weed seeds over time in tramline and control (non-tramline) treatments in the Draper barley trial at Irongate in QLD. The error bars represent the back-transformed standard errors of the means. There was a significant main effect of treatment and interaction between species and time (these effects were fitted to obtain the predictions). Figure 4. Survival of weed seeds over time in tramline and control (non-tramline) treatments in the Shelbourne barley trial at Irongate in QLD. The error bars represent the back-transformed standard errors of the means. There was a significant interaction between treatment, species and time.

The above results indicate that weed seed survival under chaff lines and chaff lines is influenced by both chaff type and weed species. The differences between the Draper and the Shelbourne study in barley indicate that chaff volume could also play a role, with stripper fronts like Shelbourne known to have less chaff output (Broster et al., 2018). However, the lack of consistent trends in the data point towards the involvement of other factors beyond those measured or controlled for in these trials. It is clear from the scientific literature that factors influencing weed seed persistence are many and varied. Some weeds have transient seed banks, with seeds that germinate within a year of initial dispersal, while others can form persistent seed banks with seeds that remain in the soil for longer than a year. Losses of seed from the seed bank result from genetically controlled physiological responses to environmental cues including light, temperature, water, oxygen tension and chemical stimulants; as well as interaction with animals and pathogens leading to death (Simpson et al., 2012).

It is evident that weed seeds of key northern species can remain viable in chaff lines and chaff tramlines until the following autumn, which is the key period of recruitment for winter species. Weeds that emerge at this time have the potential to compete with winter crops.

It is important to monitor chaff lines and chaff tramlines, so that weed seedlings can be controlled at an early growth stage, while they are relatively easier to control and before they substantially impact the crop.

The key benefit of using chaff lining and chaff tramlining is not to promote decay of weed seeds, but to concentrate weed seeds captured during harvest into one or two lines per header pass, rather than spreading the weeds throughout the paddock. The advantages are that weed seedlings are easily visible in chaff lines and chaff tramlines, and emerging seedlings can be monitored and controlled in a targeted manner (e.g. using high labelled rates and a shielded sprayer) with potential gains in weed management efficacy.

Our sincere appreciation to the farmers who have hosted trials on their properties. Your commitment to furthering this type of research is critical in our war against weeds.