Yield gap is the term applied to the difference between achieved and potential yield, where potential yield is estimated from simulation models. On average, Australia’s wheat growers are currently estimated to be achieving about half their water-limited potential yield (Hochman et al. 2016, Hochman and Horan, 2018). A national overview of the estimated yield gaps can be viewed at the Yield Gap Australia website.

The National Paddock Survey (NPS) is a four-year (2015 to 2018), GRDC-funded project designed to quantify the yield gap on 250 paddocks nationally and to determine the underlying causes. Further, its aim is to establish whether management practices can be developed to reduce the yield gap to benefit farm profitability. The project aims to provide growers and their advisers with information and the tools required to close the yield gap.

Nationally, 250 paddocks (80 in each of WA and N NSW/Qld, and 90 in S NSW, Vic and SA) were monitored intensively over a four-year rotation (2015 to 2018). Consultants and farming systems groups undertook the monitoring. Two zones in each paddock were monitored at five geo-referenced monitoring points along a permanent 200 to 250m transect. Each monitoring point was visited four times per season (pre and post-season soil sampling and in-crop at the equivalent crop growth stages of GS30 and GS65). Yield map data was obtained for each paddock which enabled the yield of each zone to be determined accurately. Table 1 lists the annual monitoring undertaken in each zone.

All paddocks were simulated with APSIM (Holzworth et al. 2014) and during the season. Yield Prophet was available to all consultants and farmers.

The whole data set (four years x 500 paddock zones) is being analysed by Roger Lawes, CSIRO for factors primarily responsible for the yield gap in each of the three GRDC regions (Lawes et al. 2018).

This paper outlines the results of thirty-five paddocks monitored by Jeremy Dawson from MCA. The results are discussed as a paddock specific yield gap analysis over four seasons focused on outcomes for the farmer and the farm group.

Results are presented as the modelled APSIM simulations in which:

The yield gap is calculated as the % difference between Yw and Ya using the equation ((Yw-Ya)/Yw).

Table 1. Overview of monitoring and data collected per zone for each NPS paddock

Data was entered via the NPS website and stored in a purpose-built SQL server database.

Data from two paddocks in S Qld are presented as examples of outputs as informed by the paddock monitoring.

Paddock and crop information over the rotation

Table 3. Days of heat and frost during GS60-79 (flowering to grain-filling)

Paddock and crop information over the rotation

The first paper on Water Use Efficiency (WUE) was published by French and Schultz in 1984. It was a break through at the time, enabling farmers and agronomists to benchmark crop performance against a target and compare performance against other wheat crops. The French and Schultz WUE equation has since been updated by Sadras and Angus, 2006 and Hunt and Kirkegaard, 2012.

The 2015 to 2017 S Qld and N NSW National Paddock Survey cereal yields are plotted against crop water use in Figure 3.  The graph reveals a general tendency for Ya to increase with crop water use with an upper boundary of yield. The upper boundary is reasonably interpreted as Yw for well-managed crops as crop water use increases. The two lines included on the diagram are the Yw lines proposed by French & Schultz, 1984 and Sadras & Angus, 2006 to describe the most efficient use of water. This establishes a common maximum WUE of 22 kg/mm/ha. 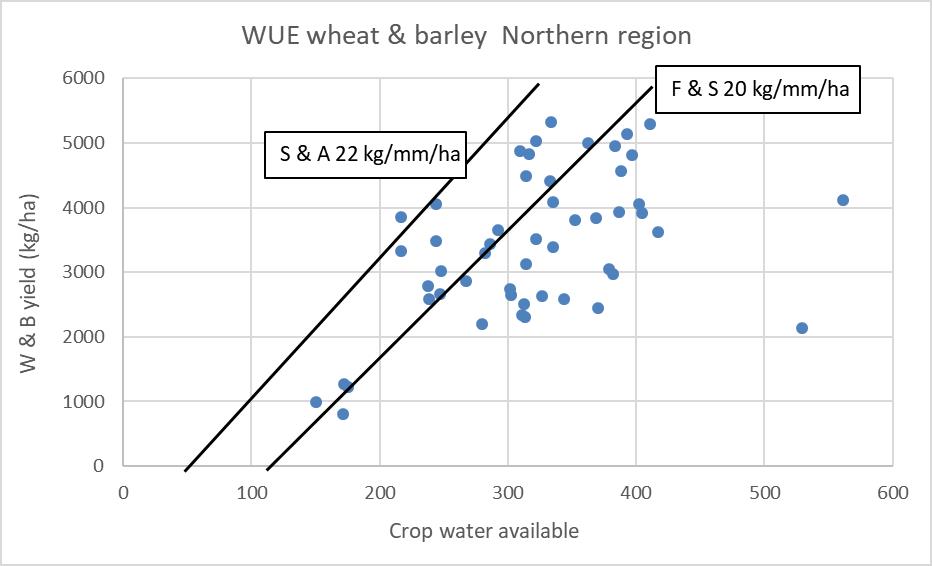 How useful is WUE compared with computer modelled assessments of potential yield, and what will the future hold?

Figure 3 and other data analysed by French & Schultz (1984) and Sadras & Angus (2006) demonstrate a considerable variation in Ya relative to Yw, i.e. a considerable yield gap in many crops. Key questions for farmers and agronomists are: what is the cause of the yield gap in each individual case and how can it be alleviated?

There are many possible causes that cannot be identified without careful paddock monitoring of abiotic and biotic factors, as attempted in the present project.

We must remember that using WUE to assess yield potential is a bucket approach to a complex system with many interactions. WUE will not explain the causes of a yield gap, nor can it inform on reasons for favourable outcomes. It may identify the presence of a yield gap but not their underlying cause(s).  It also cannot be assumed that in all cases Yw (nitrogen unlimited, water limited yield) is at maximum potential as defined by French and Schultz (1984) and Sadras and Angus (2006).

Variability is a feature of farming in Australia and there are several reasons why crop roots cannot access soil water and nutrition such as soil type (texture) and physical and chemical limitations.  Chemical and physical constraints to root development can have a large impact on potential yield such as high soil chloride levels in some regions.  Frost and heat shock are two other abiotic factors which can have a large impact on crop yield.

Interactions between soil type, available soil water and the amount of water extracted by the growing crop are influenced by crop growth and the distribution and amount of rainfall. If these factors are ignored there is limited predictive capability of yield.

High and low temperatures at critical times of crop development can further cause devastating yield loss.

Crop nutrition appropriate to achieving potential yield (Yw) is relatively well understood and for N, there are many examples of successful tactical responses to fertilisation. But this is not matched for other nutrients such as P, K and micronutrients such as Zn.

Major infestations of weeds, pests and diseases can cause yield loss and less serious infestations may cause greater losses than is commonly appreciated.  The extent of these losses remains unknown without careful paddock monitoring.

The nature of these biotic causes of yield loss vary greatly from site to site, between and within paddocks.

Crop models, such as APSIM used in this study, focus on abiotic factors but include biotic factors such as N nutrition. Their objective is to simulate yield (Ysim) in the absence of biotic factors such as weeds, diseases and pests and to estimate Yw by removing the effect of N shortage. For this, APSIM grows the crop on a daily time step and considers daily solar radiation, rainfall and nitrogen availability. It uses soil-specific information for Crop Lower Limit (CLL) (wilting point) of the soil, defined as the soil water content below which water is not accessible to the crop. CLL is influenced by soil texture (sand, silt, clay content) and subsoil limitations (such as high chloride levels). APSIM also explains the importance of rainfall distribution in terms of growth reductions due to transient water stress. Extreme events of temperature (hot and cold), which may be important at less-than daily time scales need to be further addressed.

Over the last decade our industry has made huge advances in engineering, with precision agriculture enabling mapping of soil types across paddocks, understanding what affects the crops’ ability to extract water and most importantly empowering farmers to adopt precision seeding and to apply nutrients as required.

To fully utilise the power of crop models, we need to incorporate on-the-go modelled outputs to field operations such as seeding and nutrient applications. This could well be the next frontier in crop management. Biotic stresses such as weeds, diseases and pests can be included if the appropriate in-field observations are made.

French, RJ & Schultz, JE (1984) Water use efficiency of wheat in a Mediterranean-type environment: 1. The relationship between yield, water use and climate. Australian Journal of Agricultural Research 35, 743-764

The research undertaken as part of this project is made possible by the significant contributions of growers through both trial cooperation and the support of the GRDC, the author would like to thank them for their continued support. The support of GRDC staff in the regional offices is also much appreciated.