Australia’s grains industry in 2030 - a look into the future

Dorothea Mackellar’s famous poem, My Country, sums up Australia as a land “of droughts and flooding rains”. Her assessment, written over a century ago, remains apt. Australia’s environmental extremes of drought, flood and bushfire continue to seriously disrupt Australian agriculture, affecting livestock and grain production, and lessening exports of agricultural commodities. Also largely unchanged is the familial basis of farm production in Australia. Yes, farms are larger; yes, there is greater mechanisation; yes, there are fewer farm families but nonetheless the majority of grain, sheep and wool production still comes from farm families who pass down through their generations; their farm business wealth, knowledge and skill in farming.

But many other things are changing to affect greatly or gradually farm production, especially grain production, in Australia. The list of factors includes:

All these changes, in combination, affect the current and future potential of grain production in Australia. Drawing on these changes and other key influences, the next section outlines a possible future for Australia’s grains industry at 2030. The ramifications for the grains industry in NSW and Vic are highlighted.

Late last year AEGIC released a report (Kingwell 2019) that describes the likely situation and outlook of Australian grain production towards 2030. Similarly, in late 2019 Rabobank examined strategic trends in Australia’s grains industry and came to a similar conclusion that, towards 2030, feed grain demand and supply will increase in prominence in Australia, especially in eastern Australia.  Any interested readers can read the full report, but for now, the report’s following key findings are highlighted below.

A key implication of these findings is that towards 2030, Australia’s domestic requirements for grain will become increasingly important, especially in eastern Australia where most of the population increase and greater demand for feed grains, flour, oil for human consumption and malt will occur. By contrast, most of the exportable surpluses of grain will increasingly come from the less populous states of WA and SA.

The task of finding export markets for the additional 2.4mmt to 2.8mmt of export grain available by 2030 may not be overly challenging, given the projected increase in grain imports envisaged for many of Australia’s current overseas grain customers. Nonetheless, it needs to be noted that this task of selling more Australian grain will occur against the backdrop of burgeoning exports from low-cost international competitors previously mentioned.

Assuming crop production in Australia towards 2030 remains seasonally volatile, whilst the east coast domestic demand for grain increases in relative importance, then farmers and grain users are likely to react by:

Although the increased demand for feed grains in eastern Australia may encourage more Victorian and NSW grain producers to alter their crop mix towards more feed grain production, it is unlikely that most farmers will additionally allocate more land to cropping rather than sheep production. Despite the sizeable reduction in the national sheep population since the early 1990s, NSW and Vic farmers have maintained their investment in sheep since the early 2010s (Figure 1). 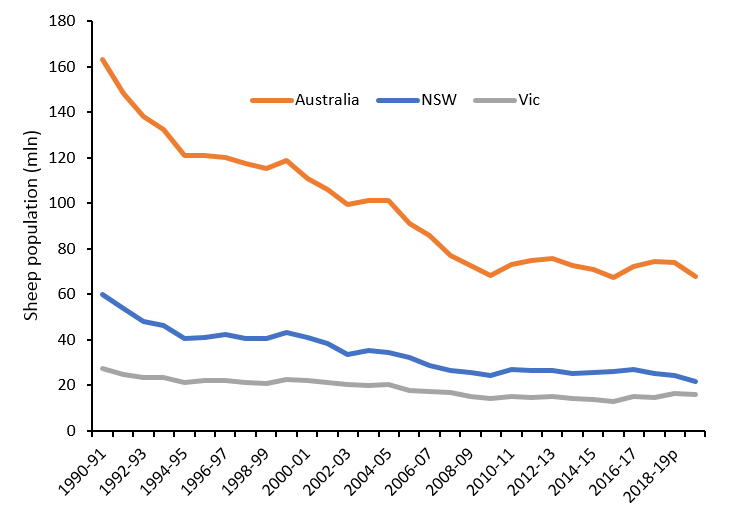 Figure 1. Sheep population in Australia, NSW and Vic since 1990

In order to retain sheep numbers, either pasture areas need to be allocated for sheep production, increased areas sown to dual-purpose crops, or affordable feed grains always need to be readily available. Given the strong upward movement in sheep meat and wool prices over the last several years, on a gross margins basis, farmers are unlikely to switch land and other resources away from sheep production. Moreover, as the domestic and overseas demand for sheep meat and wool continues to expand, then retention of sheep in farming systems is increasingly likely. In addition, retaining sheep provides a means to add value to feed or downgraded grain produced on a farm. Currently, sheep enterprises form a profitable, risk-diversifying role for many farm businesses. As a result, crop production growth will be based largely on yield increases rather than crop area increases. Accordingly, crop breeding and crop agronomy will play crucial roles in ensuring gains in crop production in NSW and Vic.

In coming decades, the traditional flow of grain from Vic and NSW farms down to ports for overseas export could be a less dominant feature of their crop production, as east coast demand for grain increases in relative importance; and especially in years of low production in eastern Australia. Interstate grain flows from SA could also feature more frequently. SA’s small domestic market and more reliable climate for grain production will facilitate grain flows into NSW and Qld. These grain flows however, will affect the returns from owning infrastructure (trains, port terminals, port storage) required for grain exported overseas from NSW, Vic and SA.

As an illustration of how reduced east coast grain production can affect national grain flows, consider the impact of the 2018 drought in eastern Australia (Figure 2) on grain production, domestic consumption (Figure 3) and grain flows (Figure 4). 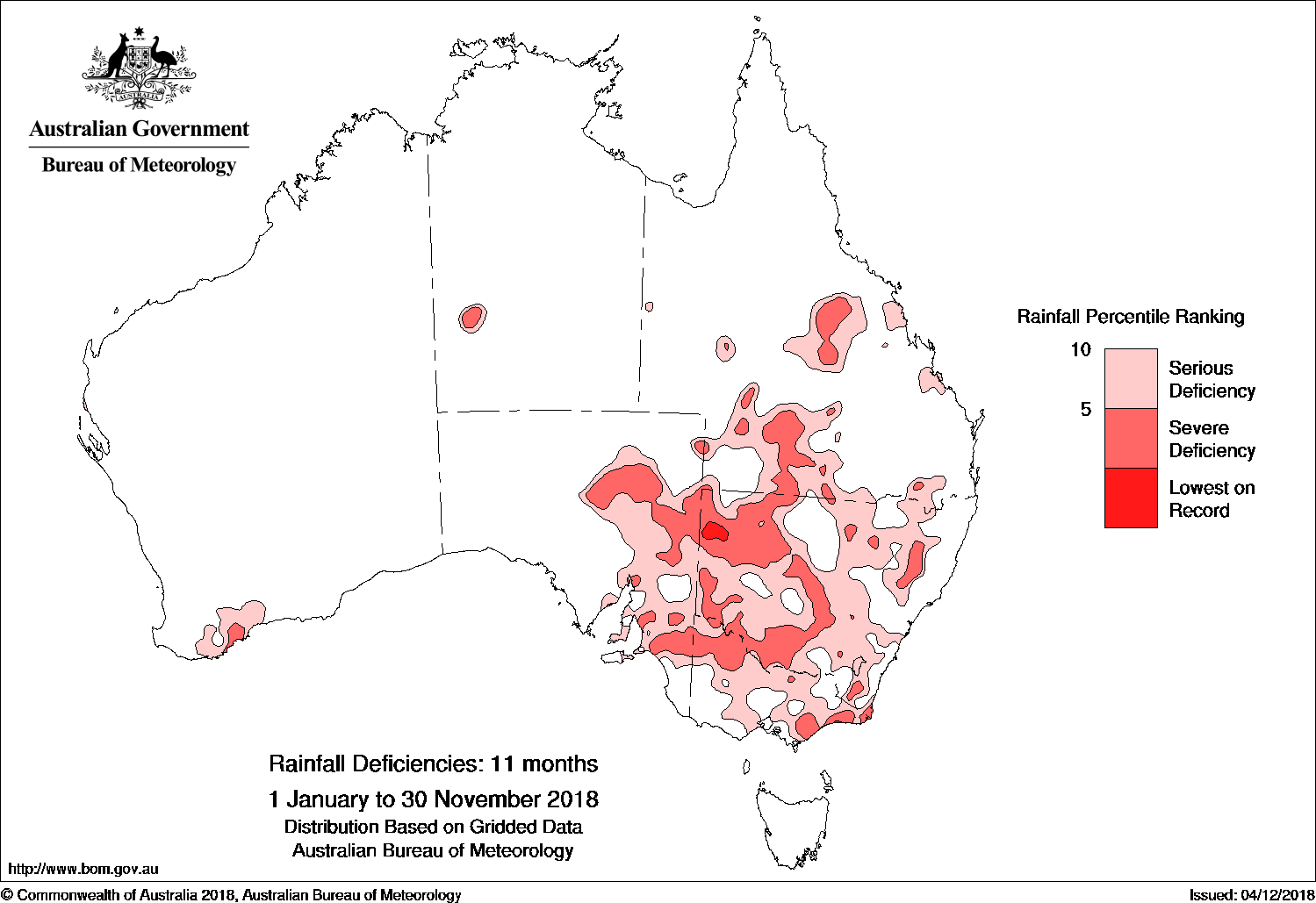 Figure 2. Rainfall deficiencies across Australia in 2018 (up until Nov 30) 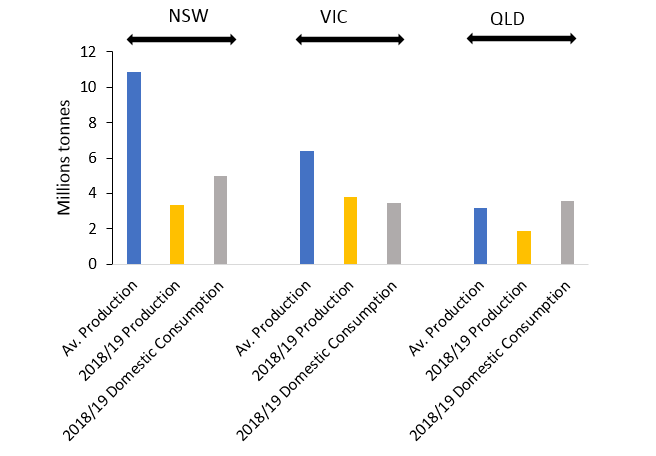 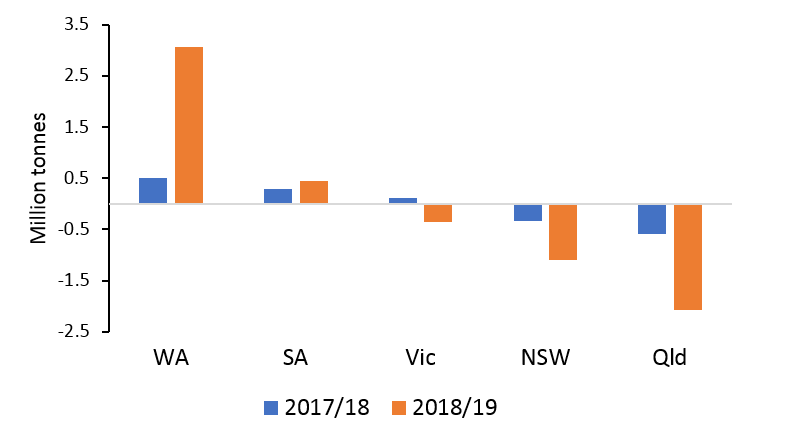 In 2018/19 some regions in SA were also affected by drought. The SA grain harvest was only around 5.6 mmt, of which the main grain handler and exporter, Glencore, only exported around 2.6 mmt, indicating that around 3 mmt was either stored, used locally or exported to eastern Australia. Hence, due to SA’s small domestic market, even in low production years, SA is able to capitalise on favourable market opportunities in eastern Australia.

In years when SA or WA escape drought, yet eastern states are drought-affected, then sizeable interstate grain flows from these states are likely. Freight differentials in coming decades could be further affected by construction of the inland rail in eastern Australia, due for completion in 2025. If the inland rail is sufficiently cost-effective, then interstate grain flows from SA could be much enhanced in some years. In addition, construction of additional grain port infrastructure in SA will facilitate coastal trade. In eastern Australia, south to north flows of grain by rail, road and ship are likely to become increasingly important towards 2030 as a product of climate volatility and continuing growth in the east coast demand for grain.

The constant challenge of a warming, drying climate is likely to limit winter crop yield growth in all winter crop regions of Australia and will increase the dependence of extensive livestock production (sheep, cattle, dairy) on supplementary grain feeding. Simultaneously, further population growth, especially in the eastern states, will increase the national market demand for grains, especially feed grains. The corollary is that growth in grain production in Australia is likely to be modest and the tendency will be for a growing proportion of grain to flow to domestic markets. Exports of grain from NSW and Vic are likely to be constrained by the growth in the Australian domestic market and the constraints of climate trends on crop yields. Depending on seasonal conditions in eastern Australia, interstate flows of grain strategically will become more important and will add to the volatility of Australia’s grain exports.

In coming decades, export grain supply chains in Vic and NSW will be affected by the combination of limited growth in crop production and an increased frequency of interstate grain flows. Farmers and grain users are likely to react by increasing their investment in grain storage; especially whilst interest rates are low which makes the cost of carrying grain across seasons more affordable. If high-yielding varieties of easily stored feed grains like barley and lupins become available, these crops could feature more in farmers’ crop portfolios. Farmers are likely to enlarge their focus on feed grain production and will target, more frequently, domestic market opportunities in eastern Australia, including local feed grain value-adding opportunities.

Farmers are likely to have increasing choices over where and when they sell grain, due to the low cost of storing grain (i.e. a low interest rate environment), and the emergence of more domestic market opportunities.

Relatively modest population growth in Australian grain production is expected towards 2030. By contrast, Australia’s population is projected to increase by between 16 and 19 per cent by 2030. This means between 4.07 and 4.89 million additional people, mostly residing in eastern States. Despite this projected increase in population and the associated demand for feed and human consumption grains, little increase in the area sown to crops in Australia is envisaged.

The corollary is that, especially during periods of drought in the eastern States, domestic market opportunities in eastern Australia will drive grain flows and increasingly affect the viability of the ownership and operation of export grain supply chain infrastructure. Grain storage will increasingly form part of many businesses’ risk management strategies. Establishing and maintaining low-cost interstate supply chains will be an increasing complementary strategic need.