iMapPESTS is a $21 million dollar research, development and extension (RD&E) endeavour funded from Australian Federal Government funds, through the Rural R&D for Profit Program, as well as investment from all seven plant industry Research and Development Corporations (RDCs), and in-kind contributions from national and international partner organisations including, SARDI, Agriculture Victoria and Rothamsted Research (UK), to name a few.

Over a five-year period (2017-2022), iMapPESTS aims to boost on-farm pest management through rapid and accurate monitoring and reporting of airborne pests and pathogens affecting Australia’s agricultural sectors including grains, cotton, sugar, horticulture, viticulture and forestry. This will be achieved through a range of surveillance, diagnostics and engagement and adoption activities (Figure 1).

Beyond a proof of concept system, iMapPESTS will lead to enhanced pest management by providing timely information on high-priority, cross-sectoral pest and pathogen presence and abundance. Such information could be used by industry stakeholders to guide the direction or intensity of scouting efforts and pest management actions. The system could also facilitate a coordinated response to biosecurity efforts during exotic pest and disease incursions, including use in delimiting surveys and proof-of-freedom claims. 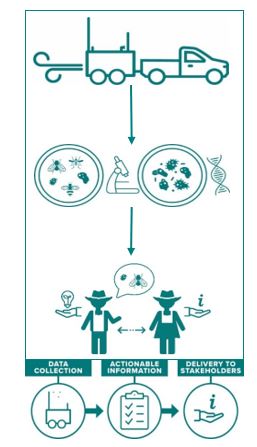 A key feature of iMapPESTS is the custom-designed, mobile surveillance unit called a ‘sentinel’ that is designed to offer automated sampling technology optimised for collecting airborne fungal spores and insects (Figure 2).

The sentinel incorporates a trailer equipped with several airborne samplers, power supply, climate sensors, telemetry, and an industrial computer to control the unit; including automated robotics to change the samplers according to the day or capture criteria, and to communicate the data. 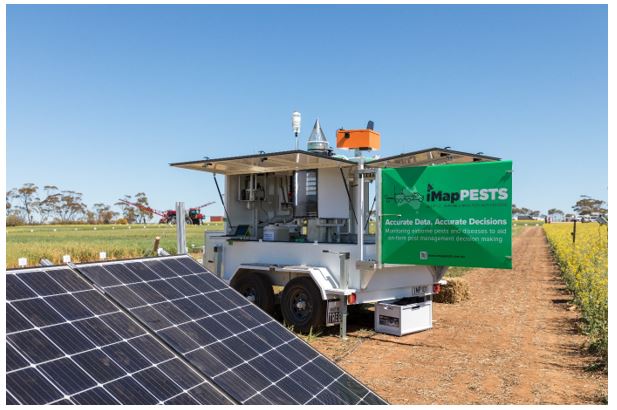 Figure 2. The iMapPESTS sentinel prototype (which is the first of six such units to be developed as part of iMapPESTS) situated at the Hart Field Site in South Australia’s Mid North region during spring in 2019. Internal components visible when the unit is open, and solar panel array to charge its battery banks in the foreground.

A key feature of the sentinel, and its auxiliary surveillance systems, is its ability to provide localised information that impacts a specific region, which may not apply to growing regions in other parts of the country.

After the sentinel captures airborne pests and pathogens, including many long-distance dispersal insects such as aphids and thrips, the samples are sent to laboratories for inspection and diagnosis of key targets by specialist entomologists and molecular diagnosticians.

Laboratory analyses of the sentinel samples establishes which priority pests and pathogens are present, and in what quantities. A combination of traditional methods of identification (morphological identification) are compared against more rapid, high-throughput technologies (SARDI Molecular Diagnostics Centre) with the aim of speeding up detection for faster delivery of information to end users.

The priority airborne pests and pathogens being monitored and reported by iMapPESTS have been established in consultation with the industry partners. The current list of targets relevant to the grains industry is listed in Table 1. Many of the grains industry’s targets also impact other plant industries (for example, green peach aphid), which means data and information can be provided to multiple industries concurrently. It is important to note that not all of the grains industry’s targets listed in Table 1 can be identified in the sentinel samples using diagnostic techniques that are available at the present time. Validated diagnostic protocols must be established in the laboratory before these targets can be monitored and reported. The targets marked with an asterisk in Table 1 are those with available diagnostic capability to monitor and report for the grains industry.

The grains list is a subset of a broader, cross-industry list that is continually reviewed and triaged according to industry needs and capacity to accurately detect in the laboratory. As a proof of concept, the aim is to accurately and rapidly monitor and report the targets on the broader list during the life of iMapPESTS, but not to make the list as exhaustive as possible. If time and resources permit, the current broader list may be expanded to include more targets for monitoring and reporting.

Data on the presence and abundance of priority targets detected in each sentinel sample are collated in the iMapPESTS cloud-based database and overlaid with basic weather data captured by the sentinel during in-field surveillance to provide context around the pest and pathogen data. The resulting data set on pest and pathogen dynamics is then summarised, visualised and disseminated via the iMapPESTS web-based communication platform to relevant audiences in a timely manner (available on the iMapPESTS website.).

The iMapPESTS website is the central point for end-users to stay up to date with RD&E outcomes, news and media, and the current location/s of the sentinels. Surveillance and diagnostics data and information relating to sentinel surveillance activities are published on the iMapPESTS website in a user-friendly format, designed to offer different levels of information to the user. Flexible and dynamic data visualisations are offered so that users can customise to interrogate the different aspects of the data generated, such as timing and weather events, against pest and pathogen data.

The iMapPESTS team aims to work closely with growers and industry representatives to understand the best ways to visualise and communicate pest and pathogen information to its end-users; sharing which targets the sentinel is detecting in a particular region at a given time. As the iMapPESTS network is further developed, growers, agronomists and consultants will be connected via multiple communication platforms to enable fast and efficient transfer of information to decision makers on-ground.

Table 1. The list of grains targets being monitored and reported by iMapPESTS. Those marked with an asterisk are validated diagnostic assays and protocols which are currently being developed to align to morphological diagnostics; Remaining targets are at various stages of protocol design/testing and are not yet ready for reporting.

Has iMapPESTS commenced operations in the grains industry?

The sentinel prototype was completed in mid-2019 and its inaugural deployment for in-field tests was in the spring of 2019 where the iMapPESTS team showcased the unit, and the iMapPESTS project more broadly, at the Hart Field Day (South Australia); a key agronomic research site in South Australia’s Mid North region (Figure 3). This industry-based launch of iMapPESTS provided the first opportunity to canvass industry (grains) stakeholders and marked the commencement of the first in-field trial and optimisation phase. This deployment also allowed for further testing and optimisation of its operations and downstream diagnostic workflows, as well as an opportunity to gather user feedback on pest and pathogen information products from industry stakeholders. The outcomes of the four-week trial at the Hart Field Site are available via the iMapPESTS website, and are summarised as follows:

The total number of each target insect counted in collected samples for each week is presented in Figures 4-7. A comparison between the 2m and 6m insect suction traps was also made (Figure 7). 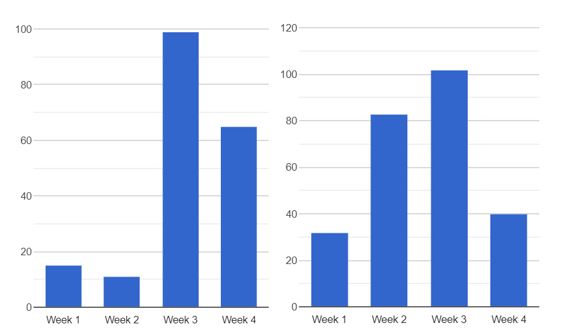 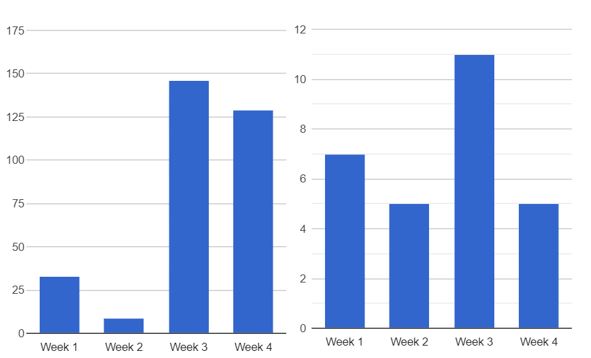 Figure 6. Relative abundance of each insect target by week identified in the suction trap samples during the Hart Field Site trial (order of display within the column bar: GPA, BCOA, RWA and WFT).

For the three aphids (GPA, BCOA and RWA) a general trend of increasing winged aphid numbers can be seen in response to the maturation and dying off of host plants (for example, canola and cereals). This forces aphids to take wing in search of new green hosts. The decrease in aphid numbers in week 4 may suggest that most winged aphids have already found their new host or have died trying. The amount of green bridge available in the area will partially determine how well aphids survive over summer to reinfect crops in the new season.

Western flower thrips are now ubiquitous in many Australian landscapes due to their wide host range. Whilst rarely an issue in the grains industry, they survive on some crops and build up populations that can impact on vegetable horticulture by the transmission of viruses such as Tomato spotted wilt virus. As with aphids, warm weather and the decreasing quality of host plants will prompt them to take to the air and be moved about in wind currents. In all the samples, the dominant thrips species was Thrips imaginis (Plague thrips) which may look like WFT but is far less damaging.

More aphids were collected in the 6m trap compared to the 2m trap. The shorter suction trap will generally provide information about the insects in the immediate paddock or property, whereas the taller 6m trap will mostly represent what is happening at a larger (potentially regional) scale. Insects captured from a 6m height are mostly those that have been caught up in wind currents (small insects) or are flying a migratory pattern (larger insects). Given that insect pests are well managed at the Hart site, it is not surprising that the taller trap collects higher numbers as well as a greater diversity of insects. Additionally, the two insect traps use slightly different methods of suction which may impact on the number and type of insects captured.

Spore data is normalised to 100% of the maximum counts detected for each target pathogen by week and presented in bar graphs (Figures 8 and 9). 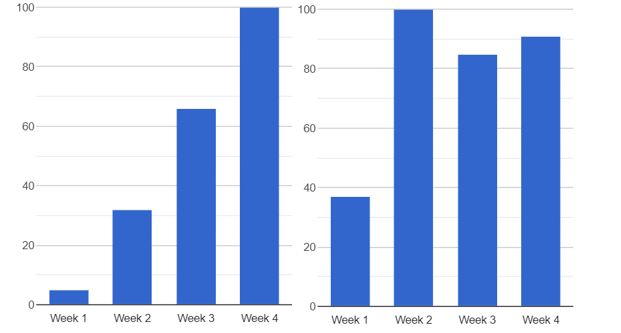 Blackleg of canola spore release increased steadily over the four-week period. This is likely driven by a rain event (10mm) prior to week 1 and a small rain event (2mm) at the end of week 2 causing subsequent spore maturation and liberation.

Maximum botrytis spore release was observed in Week 2 and Week 4. Spore release is typically driven by high humidity within crop canopy and wind events for dispersal. 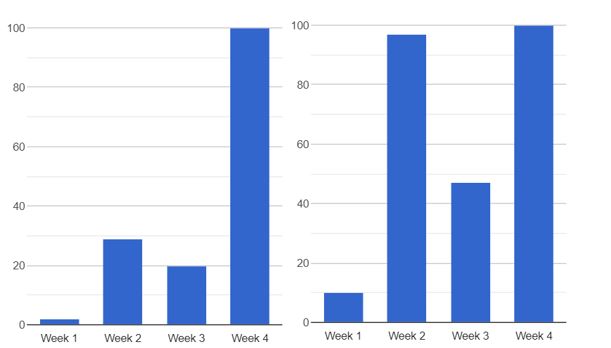 Figure 9. Total counts (normalised) of blackspot of field peas (left) and septoria (right) by week identified in the spore samples during the Hart Field Site trial.

Blackspot of field peas spore release increased steadily over the four-week period. This is likely driven by a rain event (10mm) prior to week 1 and a small rain event (2mm) at the end of week 2, causing subsequent spore maturation and liberation.

In mid-November 2019, a second trial phase of the sentinel prototype commenced at the Nuriootpa Research Station in South Australia’s Barossa Valley. The results of this viticulture-focussed trial will be made available via the iMapPESTS website at the trial’s completion in late January 2020. Solutions are being explored on how to produce more detailed and informative visualisation products for the Nuriootpa trial data to communicate to industry, including Grafana (the open observability platform) and other similar solutions.

The production of a second sentinel is also currently underway. Once that sentinel is completed (February 2020) it will be deployed for a testing and optimisation phase in Northern Queensland for approximately three months. The wet and humid conditions during the wet season will provide valuable learning opportunities that can be incorporated into subsequent sentinel designs (and, ultimately, demonstrate broad scale application and impact of the sentinels).

What’s on the horizon for iMapPESTS?

From mid-2020, additional sentinels will commence construction and once delivered will be deployed at strategic sites across the country in collaboration with industry partners. At each site, pilot user groups will be formed to capture user feedback and continuously improve outputs and outcomes generated across iMapPESTS.

A detailed deployment plan is currently being developed for each sentinel spanning the remainder of the term of iMapPESTS. With limited time and resources and the aim of demonstrating cross-sectoral impact, the aim is to spread efforts across as many industries as possible and prioritise relative high-risk targets. This strategy will demonstrate to each of the industry partners, the application and utility of the different tools and technologies that are being explored within iMapPESTS.

For more information about iMapPESTS, and to stay up to date on where and when the sentinels will be deployed in your region, please visit the iMapPESTS website.).

The research undertaken in this project was made possible by the significant contributions of growers through both trial cooperation and the support of the GRDC, the authors would like to thank them for their continued support.