Soil and plant testing for profitable fertiliser use

Precision application of variable rate fertiliser demands a knowledge of the soil available nutrient variation across a paddock and an understanding of the likely responses to applied nutrients. In addition, soil testing is shifting from surface sampling (0-10cm) to deep sampling to understand nutrient levels and constraints in the subsurface layers (GRDC farm survey, 2016). However, growers and advisers appear to be unsure of how to interpret soil test results to optimise fertiliser returns, especially with variable rate application of fertiliser. In 2016, it was estimated 15% of paddocks were regularly tested (0-10 cm) as opposed to 23% in 2014 (GRDC farm survey, 2016.).

Landmark, independent consultants and farming systems groups are partnering in this project to raise awareness of the benefits of using soil and plant testing crop to inform fertiliser decisions and responses to N and P fertiliser applications. This includes the role of soil sampling within identified production zones in a paddock to understand soil and crop variability and enable variable rate fertiliser applications. APAL laboratories are undertaking the soil and plant analysis. CSIRO are analysing yield maps, performing the statistical analysis of yields achieved on P and N rate strips, and reviewing the economic implications of implementing ‘informed’ P rate applications based on soil testing results.

Over 300 paddock-based trials were established in 2019 in South Australia (SA) and Victoria (Vic) from close to 700 sampling zones. Production zones in paddocks were defined either by using historical yield maps or the grower’s long-term knowledge of the paddock. For two production zones in each paddock, a one-hectare soil sampling area was selected; the two zones were located in-line with the sowing direction. Sampling intensity for each 1ha soil sampling area was 36 topsoil samples (0-10cm) measured for available P: Colwell, Diffusive Gradient in Thin-films (DGT), phosphorus buffering index (PBI. Six deep cores (0-10, 10-30, 30-60, 60-90cm) were also collected and measured for available nitrogen (NO3 and NH4) with the samples combined for each depth to generate one soil test value. Chloride was included in the analysis to determine whether sub-soil salinity was a yield constraint.

In 150 of the 333 paddocks sampled, growers applied P rate strips across the paddock at sowing, ensuring the strips crossed the 1ha soil sampling grids. Available soil P status and likely fertiliser P response rates were calculated from Colwell and DGT tests in association with PBI. The rates of P applied were informed by the soil test result. Most strips trials included a ‘zero control’, the grower’s ‘standard rate’ of applied P, and double the ‘standard rate’ in situations predicted to be P responsive.  For cases where soil P levels were high and P responses were unlikely, half the ‘standard rate’ was applied. The P rate strips received the same N as applied by the grower for the rest of the paddock. Tissue samples were collected from each fertiliser strip between growth stage (GS) 16 and 32 to check on tissue P status and possible nutrient deficiencies along with dry matter estimates.

In 2019 a number of paddocks included top-dressed N strips to generate in-crop N rate trials in paddocks where soil N variability was high. These were applied at the same time as the grower’s in-crop urea in the rest of the paddock. As with the P scenario, N trials had rates of N applied as informed by the starting soil N profile and crop yield potential, and often included a ‘zero control’, a ‘standard rate’ and double the ‘standard rate’ in responsive situations, and in non-responsive situations a half ‘standard rate’.

Yield monitor data was used to calculate the yield for each P and N fertiliser treatment. The yield from each strip within each 1ha soil sampling area was used to correlate crop yield to soil P and N status. Harvest data within each of the two soil sampling zones was analysed for statistical difference using a moving average t-test (Lawes and Bramley 2012) enabling the evaluation of nutrient treatment responses between zones and within zones. A partial gross margin analysis will be undertaken to calculate the change in income achieved from the different fertiliser rate strips.

A brief snapshot of the nutrient status across all project paddocks revealed high variability of both N and P between the production zones in each sampled paddock. There were many opportunities identified within each agroecological zone for the establishment of both N and P trials. Overall, the N status was generally good with about 80kg N/ha in the high production areas (Figure 1). Using the rule of thumb of 40kg N/ha required for 1t/ha grain, it was predicted this would support at least the production of a 2t/ha wheat crop without factoring in immobilisation nor mineralisation. In general, the N status was higher in the low production areas (about 100 kg N/ha) than the high production areas which suggests a N build up due to lower yields and N removal in seasons prior, possibly caused by a soil constraint.

At a paddock level, P deficiency is driven by the ability of different soils to fix or absorb P sources as estimated from the PBI. Critical Colwell P was determined by the relationship generated in Moody (2007). Critical DGT value for wheat is 64µg/L (95% confidence interval (CI) = 53-78µg/L). Quite often low production zones were associated with low extractable P, high PBI and relatively high soil N due to less utilisation of N sources and its subsequent removal (Figure 2).

In these areas, simple ‘paddock replacement fertiliser’ strategies are often unbalanced for N and P and are creating a wider gap between yield production zones and possibly declining yields. Improved gross margins from more profitable fertiliser applications are expected if different production zones are assessed for the ability of the soil to provide the crop with adequate nutrients.

Figure 2. Overall soil P status across the project area for allocated ‘high’ and ‘low’ production zones within each paddock as assessed by Colwell P (left) and DGT (right) together with PBI for each zone. Error bars represent standard error across all sampling sites in each zone.

An example of the experimentation is presented below for a paddock sown to wheat in the Victorian Mallee where Scepter wheat was sown on 15 May 2019. The soil characteristics for both sampling areas in this paddock was slightly alkaline, clay loam to depth with starting profile N between 88-135 kg/ha allowing enough N to support the yield obtained with the additional N applied in season. 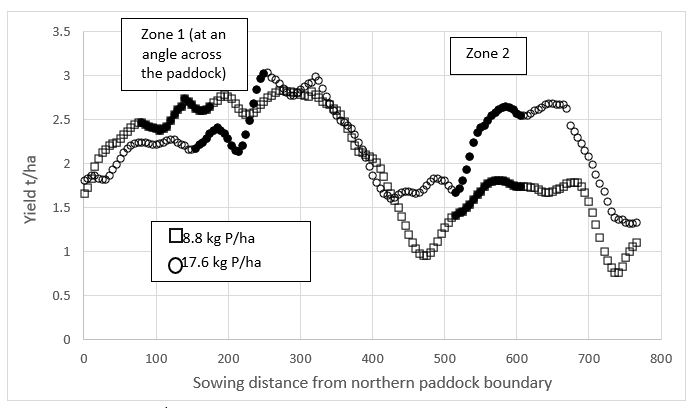 Harvest yield map data were used to analyse the yield differences between P treatments in each of the two soil sampling areas (1ha areas located in two distinct production zones in line of sowing). Statistical analysis was based on the t-test for comparing two strips (Figure 3).

A significant difference in yield gain was confirmed only in Zone 2 for the high rate of P applied (17.6kg P/ha) (Table 2). This coincided with the lower DGT value and higher PBI area but higher Colwell P. This illustrates the importance of combining PBI with Colwell P interpretation as the critical Colwell P value from this PBI level is slightly higher (32 mg/kg) than measured. Recent GRDC work (UQ00082) has shown for this PBI level that critical Colwell P levels are near 40 mg/kg.

Soil nutrient status is highly variable across paddocks and these initial results indicate the benefits of sampling more than one soil type or production zone within a paddock. Preliminary results indicate that intensive soil sampling of production zones can provide significant benefit in terms of P application while results from the N rate application strips had not been analysed at the time of writing.

The research undertaken as part of this project is made possible by the significant contributions of growers through both trial cooperation and the support of the GRDC, the authors thank the GRDC for their continued support. We also acknowledge the farmers who are in this project for sowing the strip trials, applying variable rate P and N, and supplying yield monitor data at harvest.