The top five exotic nasties to have on your watch list

Exotic pests and diseases are those not yet found in a region. The pests and diseases described in this update paper are all exotic to Victoria If they do gain entry, many will pose a significant threat to Victoria's cropping industry, valued at over $1.8 billion (ABARES 2014-15). Some will also prevent access to our important overseas markets. Preventing pests and diseases from gaining a foothold, and quickly identifying and eradicating localised outbreaks, is critical to protecting the Victorian grains industry.

CropSafe is a critical tool in identifying potential exotic pests and disease threats to Victoria’s grains industry. Agriculture Victoria delivers the CropSafe program in collaboration with a number of major agribusiness companies. Together, this cluster incorporates approximately 80% of Victoria’s agronomists. CropSafe has a network of over 200 experienced agronomists continually looking for new pests and diseases. This means Victorian growers can be far more confident that their grain crops are free of exotic pests. The CropSafe program has streamlined sample receipt, analysis, reporting and record keeping.

The 2018 CropSafe general surveillance survey resulted in CropSafe agronomists reporting on over 1.9 million hectares, which is approximately half of the estimated 3.2 million hectares of grain crop in Victoria. Crops are inspected three to ten times (five times on average) during the growing season, depending on the crop type and scouting program required for crop pest and disease management.  The Agriculture Victoria Chief Plant Health Officer relies on surveillance data for market access related area-of-freedom claims.

The CropSafe program maintains its rigor through continued communication and a range of extension products. This ensures that the agronomists in the network and the wider industry understand key pests and diseases that are of greatest risk to Victorian grain growers. Growers and agronomists can find the key 34 pests, diseases and parasitic weeds that are threats to the Victoria grains industry in the recently updated ‘CropSafe – guide to exotic pests and diseases of grain’ booklet. A link to the electronic version of the booklet can be found in the Useful resources section within this paper.

For sampling material and instructions (including plastic specimen bags and plastic vials) or information on joining CropSafe, contact Luise Fanning on (03) 4344 3111 or AgVictoria_ Crop Safe Program.

The success of CropSafe was acknowledged with a National Biosecurity Award in March 2017.

Khapra beetle can cause losses of up to 75% from direct feeding. Infested grain also becomes contaminated with beetles, cast skins and hairs from larvae, which can be a health risk and are difficult to remove from grain storage structures and transport vessels. Larvae can grow up to 7mm long, are reddish brown in colour and darken as they mature. They have characteristic long hairs all over their body, especially at the rear end and can survive without food for over 12 months.

Adults are 2mm to 3mm long and 1mm to 2mm wide, brownish in colour with a smooth oval shaped body. There are three transverse bands (markings) of pale coloured hairs on the wing covers.

A beetle pest of stored grain and dry foodstuffs worldwide. The larvae of Khapra beetles are serious pests of oilseeds, damaged and whole cereals and, to a lesser extent, pulses. The adults rarely, if ever, eat or drink.

Khapra beetles are spread through the movement of stored grain and products or as contamination of seed, machinery and straw.

Khapra beetle is found in Africa, India, Russia and many middle Eastern countries.

Wheat grains develop dark discolouration at the pedicel or ‘embryo’ end of the grain. The discolouration progresses along the grain until it is entirely discoloured. The infection is difficult to detect on the plant. Infected grain has a distinct fishy smell, making it unacceptable for human consumption. Symptoms on the grain may be confused with black point, a physiological disorder common after wet conditions at harvest. Grain discolouration may also be caused by other fungi, so samples should be sent to a laboratory. Spores of the fungus survive in grain (seed), soil for up to five years and cereal trash. It can be spread by movement of seed, soil, wind, on machinery and anthropogenically.

The spores require free water in the soil to germinate. Air temperature ranging from 10°C minimum to 26°C maximum, with high humidity above 75% relative humidity during heading and flowering, is required for infection.

First detected in India and now found in many middle Eastern countries. Confined to specific areas of South America, South Africa and the USA. If Karnal bunt became established in Australia, access to over 45 markets would be significantly reduced.

Symptoms are the same as other wheat stem rust pathotypes. Elliptical blisters on the stems and leaves running parallel to the long axis. These blisters break open after a couple of days to reveal a mass of rust-coloured spores. If stem rust is detected on a wheat line which is thought to be resistant, samples should be sent for testing.

Wheat and other cereal crops.

Several stem rust pathotypes are present in Australia and resistant varieties of wheat have been bred to limit crop losses. This new pathotype was discovered in Uganda in 1999, and is now found in Kenya, Ethiopia, Sudan, Yemen and Iran.

Seedlings can develop lesions on the hypocotyl or cotyledons. Stem lesions are very distinctive and are oval shaped up to 2cm long and contain spore masses which are pink to orange. These cause the stem to collapse on one side and bend to produce a ‘shepherd’s crook’ symptom. Further rainfall will allow infection progress to infect pods and seeds. Symptoms are most noticeable during flowering. Lupin branches die back in mature plants, eventually causing their death. 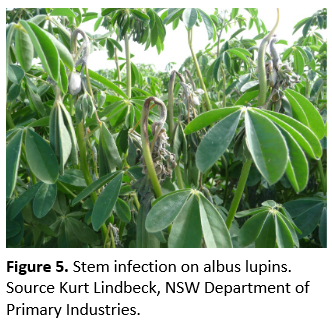 Pods can develop lesions which also result in the twisting and distortion of pods. Pod infection can result in nil seed set or infected seed. Lesions on pods also develop brightly coloured spore masses which vary in colour from pink to white. Infected lupin seeds can be discoloured or symptomless. Discolouration of seed can also be caused by another fungal disease, brown leaf spot, caused by the fungal pathogen Pleiochaeta setosa.

The pathogen can spread into new areas when infected seed and trash are carried by trade, farming practices, animals or birds. Short distance spread within a crop is via water-splash of spores during rain or irrigation.

C. lupini can survive over summer on infected trash and seed. Wet conditions in winter favour germination of infected seed and disease establishment. Frequent rainfall during flowering favours spread of the disease within crops and development of shepherd’s crook symptoms.

The disease is widespread throughout Western Australia and has not been observed in South Australia in the last decade, despite widespread outbreaks in the late 1990s. An outbreak of anthracnose occurred in New South Wales in 2016, but this was contained, and the disease was declared eradicated in 2019.

Feeding damage on cereal plants from Mayetiola hordei can cause leaf discolouration, from a darker green to bluish green or slowing of new growth in seedlings. Plants are often stunted, and tillers can become weakened, causing plants to lodge. The main identifying feature of Barley stem gall midge is the formation of pea-sized galls (swellings of the plant tissue) at the base of the host plant between the leaf sheath and stem. 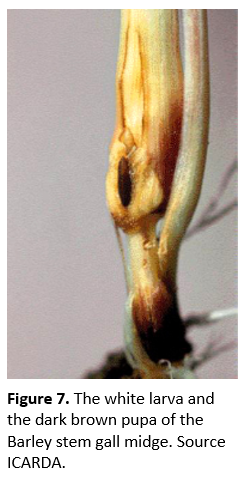 Gall midge larvae have a long-lived larval stage specialised for feeding, whereas adults are short lived and generally only last one to two days, during which time they do not feed but mate, find suitable host plants and lay eggs. Small numbers of eggs are laid indiscriminately on numerous host plants. Up to 400 eggs are laid per lifetime. Larvae undergo three instars growing up to 3mm to 4mm in length.

The second instar becomes a puparium within which the non-feeding third instar, pupa and adult develop. Larvae are initially pale red in colour and become milky white as they mature. Adults are small, mosquito-like flies about 2mm to 4mm long, have one set of wings with a few weak veins and beaded, elongated antennae.

The preferred host of M. hordei is barley (Hordeum vulgare) but it will also feed on oat (Avena sativa), wheat (Triticum aestivum) and rye (Secale cereale). Stem galls are produced almost exclusively on barley but occasionally on oat, wheat and rye.

Barley stem gall midge originated in Tunisia. Its range has expanded through North Africa and has been recorded in European countries; Spain, UK and France.

Thank you to Kurt Lindbeck (NSW DPI) and the Agriculture Victoria Chief Plant Health Officer Unit for their contribution of content and expertise.