What N is in profile - 3 dry years with minimal mineralisation. What are the results showing? Also, insights from a long-term nutrition site running since 2007 in CNSW

This site was commenced in 2007 with soil N to 0-60cm of 160 kg/N/ha sampled pre plant in 2007 (field peas 2006) and a site Colwell phosphorus of 26 mg/kg. There are 25 fertiliser treatments replicated 4 times and the crop rotation is sown over the same plots annually.

One issue seen in 2019 as a result of accurately sowing row-on-row with sub 2cm Real-Time Kinematic (RTK) auto steer, was high levels of crown rot as a result of sowing on exactly the same plant line as last year’s Gregory wheat. One of the strategies to reduce the impact of carry over crown rot infection is avoiding contact with last season’s wheat stubble. When sowing row-on-row, contact with last season’s stubble was maximised and crown rot infection levels were high, and screenings were >15%.

In 2015 the original 20m long plots were cut in half. From 2015, the 2007 ‘A trial’ N and P rates were retained on the western half and the 2015 ‘B trial’ N and P rates were applied on the eastern half of the original plots. See table 1. The ‘A trial’ treatments continue to build soil P and N while ‘B trial’ treatments now run down and also build P and N.

The balance of urea is applied as urea broadcast in wheat at GS31 and at the pre rosette stage in canola. Urea was not applied in 2010 (Albus lupins) and urea was not top-dressed in 2007, 2014 (low yield potential due to replant) and 2018 (dry conditions).

Sulphur has been applied 4 times during the life of the trial as broadcast gypsum (2), banded potassium sulphate (1) and broadcast Gran-Am® (2017). A total of 5kgs/ha of zinc and 2kgs of boron have also been applied.

In the absence of deep N testing results for the 2020 season due to the difficulties coring dry soil profiles the annual application of urea nitrogen (kgs/N/ha) and the annual export of grain nitrogen as kgs/N/ha over the current life of the trial from selected treatments is presented in table 2. The method used to balance nitrogen at this site does not consider gains from mineralisation, losses from denitrification, leaching or volatilisation.

The supply of N from mineralisation is driven by soil moisture, soil temperature and soil organic matter levels. Soil pH also has an effect with slower mineralisation rates on acid soils. Mineralised nitrogen is available throughout the year.  Generally, there is more N mineralised and available in autumn and spring and lower availability in winter when soils are at lower temperatures. Whenever there is a rainfall event and surface soil is moist, there is potential for a mineralisation event to occur. Although rainfall events have been few and far between in the past three seasons some nitrogen would still have come into the system.

Potential loss of soil nitrogen through denitrification has been minimal as a result of low rainfall and no waterlogging events. The last potential denitrification events at the Grenfell trial site occurred in 2010 and 2016 (see rainfall figure 1). Nitrate leaching isn’t a significant pathway for loss on these soils. (Smith, 2000).

Although volatilisation losses are low on these acid soils during winter, the top dress urea is managed to avoid any loss by topdressing in front of a rainfall event.

Immobilisation of N may occur when plant residues of low N content are decomposing in the soil. Immobilisation represents a temporary unavailability of mineral N in the soil for growing plants to access. Immobilisation was first seen on site in 2015 when wheat on low nitrogen treatments exhibited nitrogen deficiency symptoms where canola residue lay on the soil surface. The residue was concentrated as a chaff pile where the small plot harvester had stopped at the end of each plot.

Trial treatments include four rates of nitrogen to supply a total of 30, 60, 90, or 120 kg of nitrogen per hectare annually (unless otherwise indicated). Displayed in figure 2 and table 2 is the total nitrogen supplied as urea for treatments 20P 60N and 20P 120N from the first planting in 2007 and the grain nitrogen removal 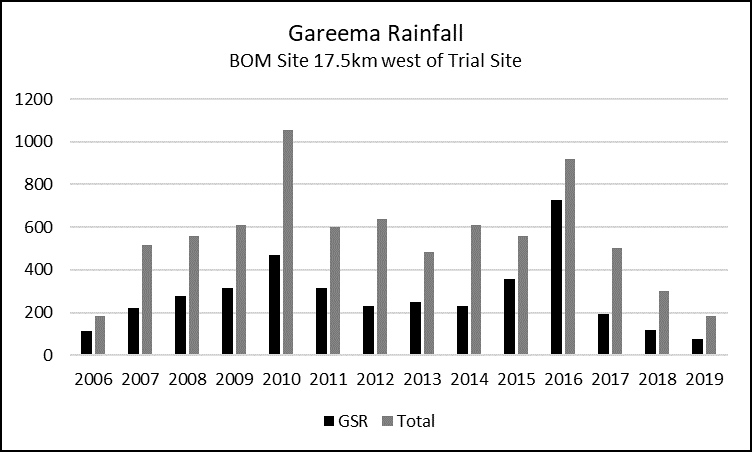 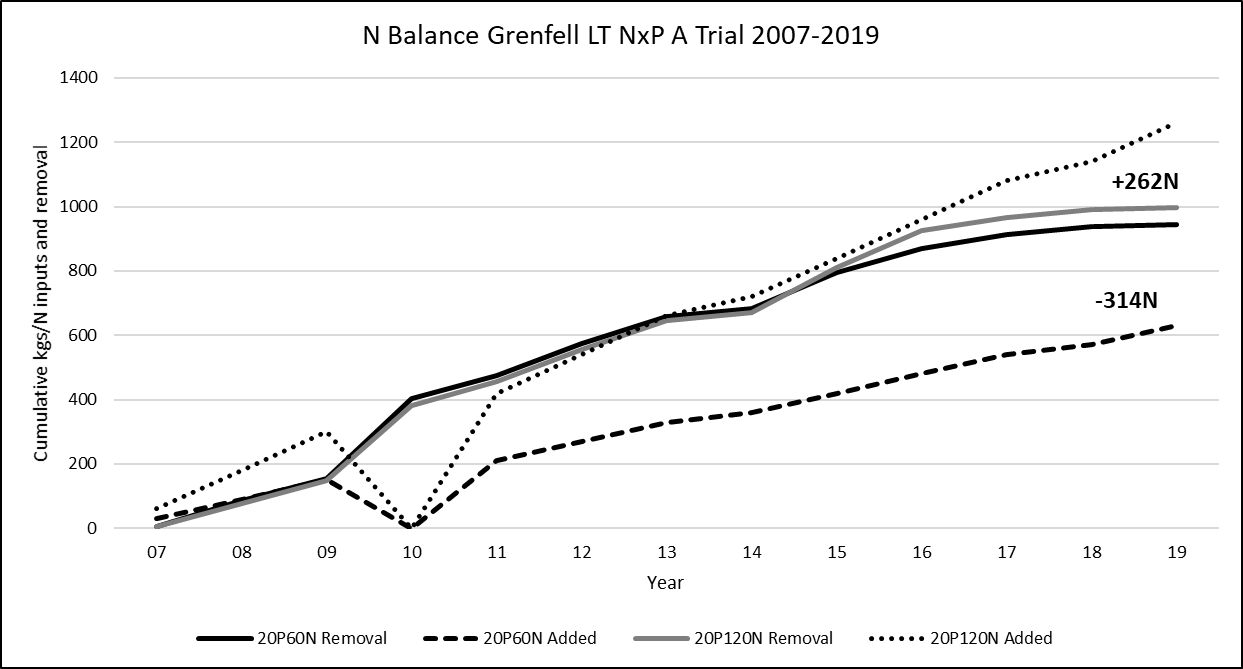 The grain yield nitrogen removal for the 20P0N treatment over the current life of the trial has a negative balance of -807 kg/N. Up until 2013 starting profile nitrogen from the field pea crop in 2007 and the albus lupin crop in 2010 have supplied sufficient nitrogen to achieve comparable grain nitrogen yield to the 20P60N and 20P120N treatments. 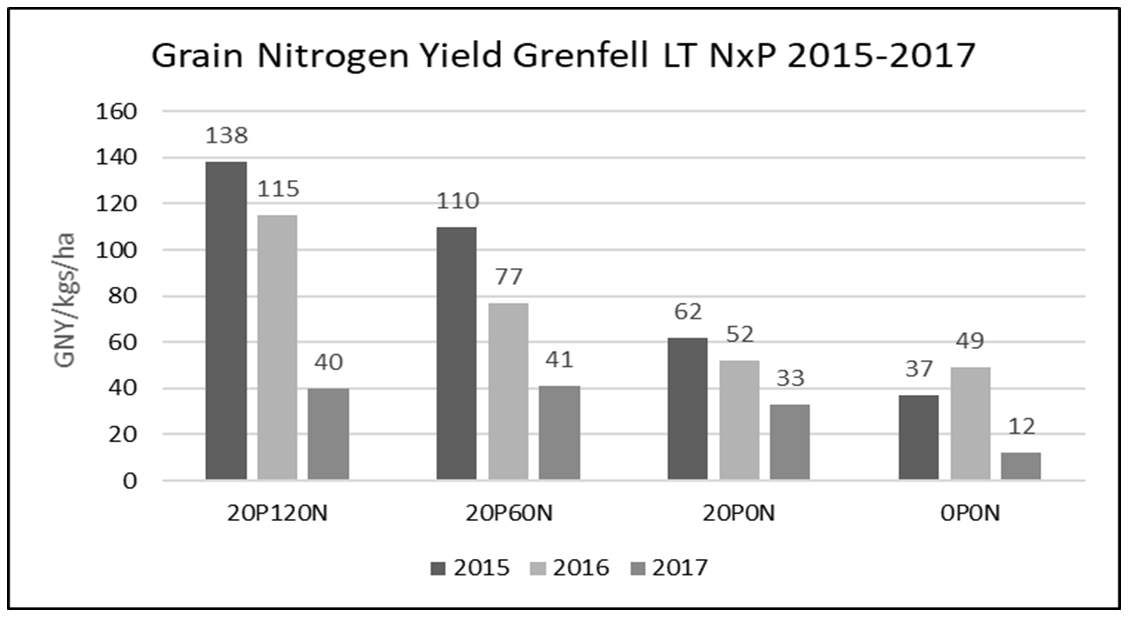 The total soil nitrogen pool is being drawn down to an unsustainable level in the 20P60N treatment by removing more N than what is coming into the system (See Figure 4) through mineralisation. In a 500 mm average annual rainfall zone 2-3% of soil total N is mineralised during an average year in southern Australia. This represents 28-42 kg N/ha from a topsoil containing 1% OC (Angus 2016). 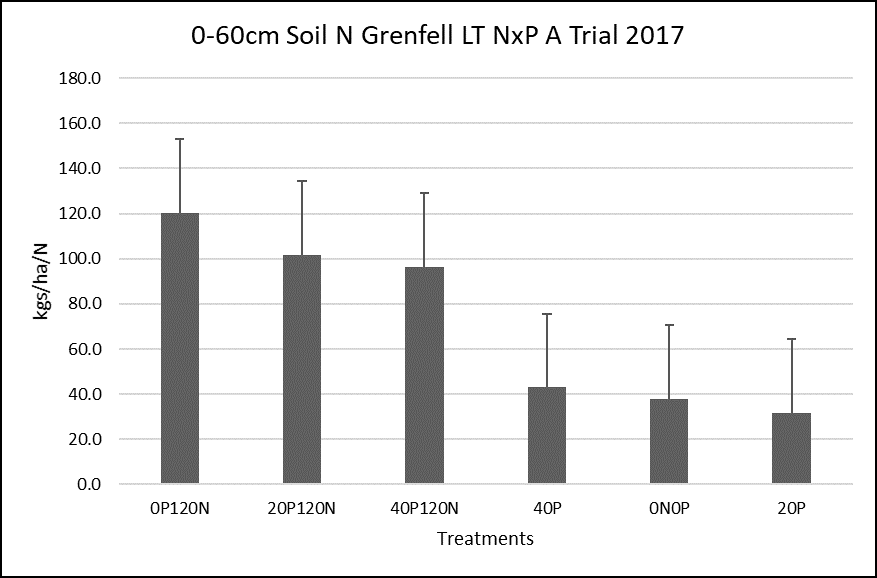 As soil organic carbon levels continue to decline at this site (see Figure 5) and if a pulse crop isn’t included in the rotation, total soil nitrogen is likely to decline further. 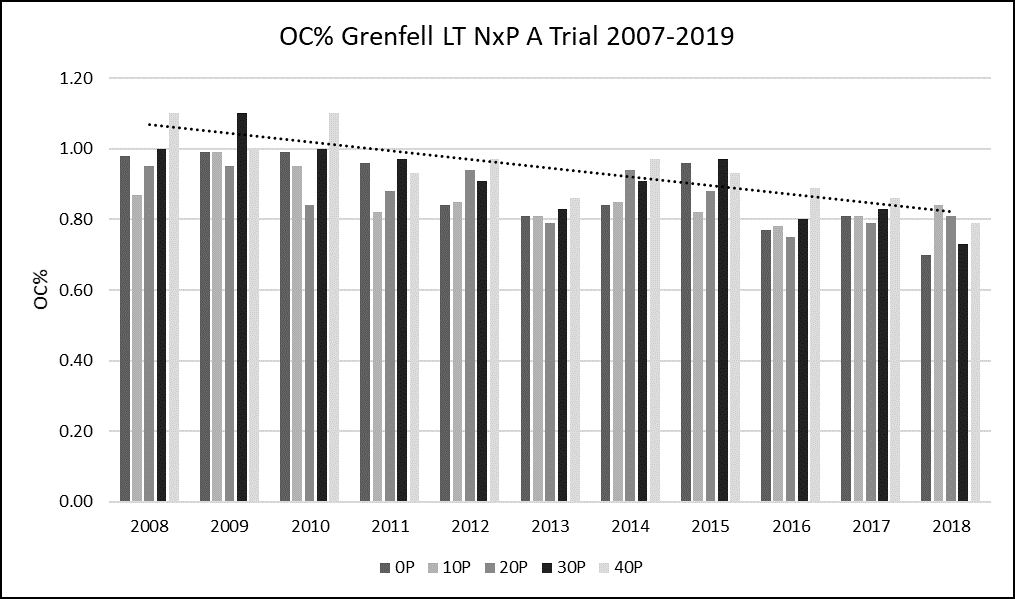 After 14 years of continuous cropping in an experiment at Harden, NSW, the daily rate of mineralisation, as a percentage of the total nitrogen present, was 30% less than the rate measured after 3-6 years of cropping. This decrease was in addition to the decrease present due to a fall in total organic matter and suggests the quality of organic matter has also decreased. (Angus 2006)

The N balance (Figure 2) also shows the effect of the ongoing drought with the grain yield nitrogen removal declining and continued application of urea nitrogen increasing the cumulative urea nitrogen.

When conditions allow, segmented deep nitrogen sampling will identify where that nitrogen is lying in the soil profile.

Varieties displaying this symbol beside them are protected under the Plant Breeders Rights Act 1994.
® Registered trademark