Biserrula: its fit in the system

Poor reliability of autumn breaks, short springs and drought have reduced the reliability of traditional annual legume species such as subterranean clover and annual medics. Lucerne has been used in many areas to at least partially fill the gap left by traditional legumes, but soil acidity can limit its adaptation and maintaining adequate groundcover in lucerne paddocks can be a problem in many instances. Over the past few decades there has been considerable development of annual legume species with improved adaptation to climatic and soil challenges. Both 2018 and 2019 have allowed assessment of production and survival attributes of a range of annual legumes under extreme drought conditions in the GRDC northern region. In both years, biserrula has exhibited the capacity to produce viable quantities of seed to facilitate ongoing regeneration. This paper reports on the seed production achieved by biserrula under drought conditions and also identifies other species as having considerable potential under such conditions. The principles of use of these hard seeded species in rotations is also briefly discussed.

The importance of setting up a seedbank

For annual pasture species, the establishment of an adequate seedbank is critical to the ongoing success of the pasture. A key weakness of traditional annual legumes with their shallow root systems is their inability to maintain growth for long enough in spring to allow seed set. Species such as subterranean clover and annual medics have root systems that typically do not extend beyond 80-100 cm. In contrast, annual legume species such as biserrula and serradella have root systems that may extend beyond 200 cm. Root systems of biserrula and serradella also develop relatively rapidly meaning that they have greater capacity for survival if adverse moisture conditions are experienced following germination. Additionally, both biserrula and serradella are capable of long periods of indeterminate growth, meaning they will continue to grow and produce seed while moisture is available, whereas traditional legumes are largely determinate in their growth. Rapid developing, deep root systems and capacity for extended periods of reproductive growth are attributes that have considerable potential to enable formation of adequate seedbanks, particularly under adverse climatic conditions. 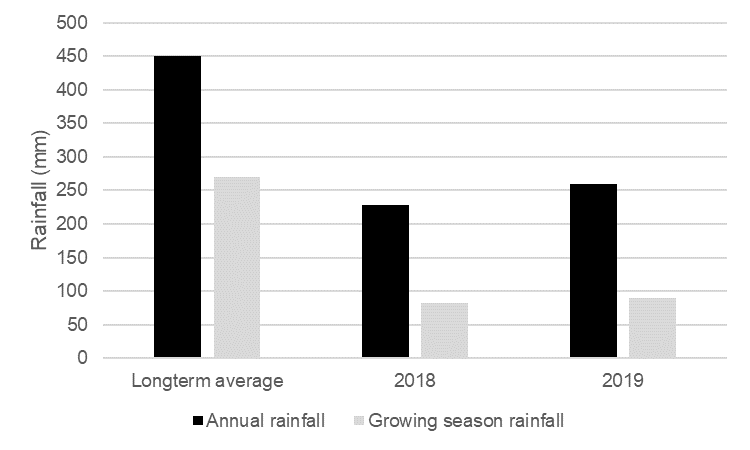 Figure 1. The long-term annual and growing season rainfall (mm) and rainfall for 2018 and 2019 for a field site located between Ungarie and Kikoira NSW.

Generally, a minimum target of 100-150 kg seed/ha is required to support adequate regeneration of annual legumes in subsequent years (based on traditional legume species). In 2018, Casbah biserrula produced more than 170 kg seed/ha (Figure 2). In contrast Dalkeith subterranean clover produced less than 10 kg seed/ha. Interestingly, the biserrula had produced one third of its total seed by late October. Late rainfall in October resulted in growth recommencing in biserrula and additional seed production. Margurita French serradella, a hard seeded French serradella of similar maturity time to Casbah biserrula was also included in the field trial. Despite similar maturity times, the Margurita French serradella had not commenced pod formation by late October and produced 80 kg seed/ha. Biserrula appears to have greater plasticity in commencement of reproductive growth under the low moisture conditions experienced in 2018. 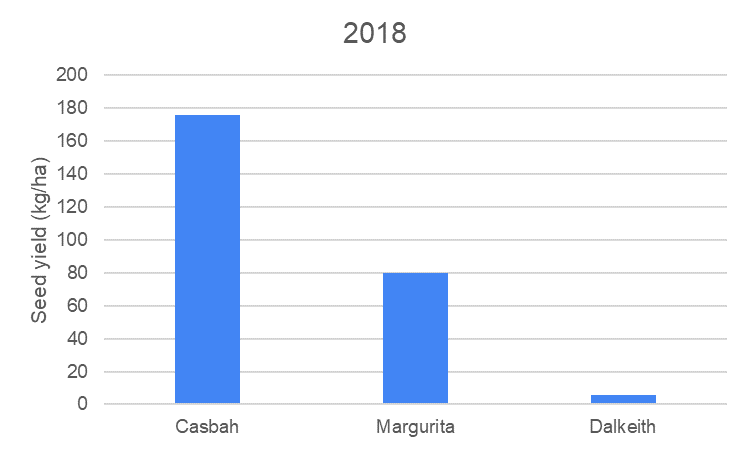 In 2019, a new field trial was established. An experimental line of an early maturing, moderately hardseeded yellow serradella (87GEH72.1a) was included along with Casbah biserrula and Dalkeith subterranean clover. In 2019, only 5 mm rainfall was received in September and none in October. Despite this, the Casbah biserrula still produced more than 80 kg seed/ha and the experimental yellow serradella, more than 130 kg seed/ha, while Dalkeith subterranean clover produced less than 10 kg seed/ha (Figure 3). Whether 80 kg seed/ha of biserrula is sufficient for regeneration remains to be seen. However, biserrula has very small seeds (approximately 1,000,000 seeds/kg) compared to traditional species such as subterranean clover (110,000 to 150,000 seeds/kg) and therefore seed number per unit area may be sufficient for biserrula. 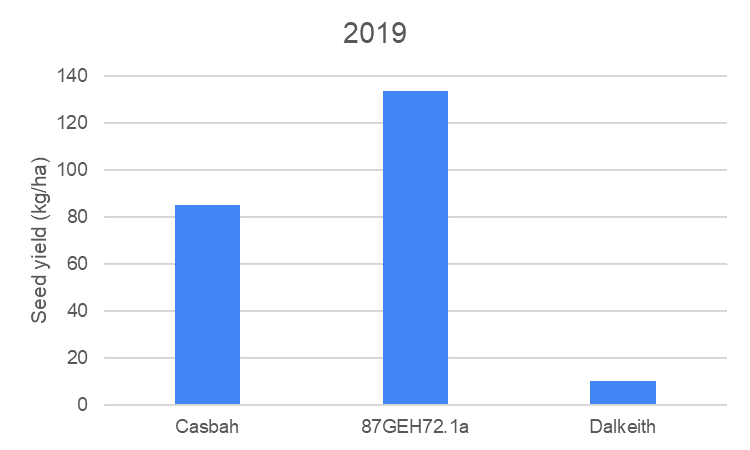 Figure 3. Seed production (kg/ha) of Casbah biserrula, an experimental line of yellow serradella (87GEH72.1a) and Dalkeith subterranean clover at a field site between Ungarie and Kikoira, NSW in 2019.

Using hardseeded legumes in the rotation

Biserrula has a significantly higher hard seed level in the autumn following seed set compared to traditional legumes. In NSW, we have measured hard seed levels in the autumn following seed set of 70->90% for Casbah biserrula, whereas subterranean clover frequently has <30% hard seed at the same point in time. The high residual hard seed level of biserrula means that regeneration in the second year can be variable. For this reason, it is suggested that the paddock be cropped to give time for hard seed to break down. Cropping in the second season also makes sense as it allows the crop to utilise nitrogen fixed by biserrula in the year of establishment. In the third year, the paddock could be allowed to regenerate, or alternatively it could be cropped again, if desired. Research is currently ongoing to determine how long biserrula seed will persist in the soil.

For other hard seeded species, rotation strategies may need to be varied compared to biserrula. For example, for hardseeded French serradella (e.g. Margurita), hard seed levels in the autumn following seed set vary from 40-60% in NSW. Thus, regeneration in the second year is likely to be better than for biserrula, but consideration should also be given to cropping to utilise nitrogen fixed in the establishment year. Rotations of one-year crop to one-year pasture are common for hardseeded French serradella.

A key point to stress is that selection of species of hardseeded legume to use in a cropping rotation should firstly consider how well adapted the species are to local soil and climatic conditions. Once suitable species are identified, then consideration needs to be given to selection of varieties that will fit the local environment and the rotation to be imposed. A significant advantage of hardseeded legumes is their ability to persist through a cropping phase and regenerate without the need for resowing. In essence, they can be used as an on-demand break in the cropping rotation once a seedbank is established.

Biserrula has capacity to cause outbreaks of primary photosensitisation in grazing livestock. Studies at Charles Sturt University showed reductions in photosensitisation incidence where other species contributed 10-30% of pasture on offer. Therefore, once a seedbank is established either deliberate introduction of other species into the sward (e.g. sowing a low rate of cereal) or allowing annual grasses to regenerate may reduce incidence. Animals should be closely monitored for signs of photosensitisation and removed from pasture if it occurs. Biserrula is not highly palatable to grazing livestock and they will tend to select other species including problem cropping weeds such as annual ryegrass prior to grazing biserrula. Therefore, biserrula may be a useful tool in controlling problem cropping weeds. Further, information on biserrula and primary photosensitisation including tactics used by producers to reduce incidence can be found in the following link:

Getting started with hardseeded legumes

One of the most successful ways we have seen producers get started with hardseeded legumes is through the use of nursery paddocks. The new generation of hardseeded legumes that includes biserrula, French serradella, yellow serradella, arrowleaf clover, bladder clover and gland clover are all aerial seed producers. This contrasts with subterranean clover which buries a high proportion of its seed. Aerial seeding of the new generation annual legumes mean they can be harvested with a cereal header. If a nursery paddock is chosen, a number of species of legumes can be evaluated for suitability simultaneously. Small areas (5-20 ha) of a range of species can then be sown as blocks in the paddock. By doing this, the producer can evaluate at relatively low seed cost, a number of options that might suit his/her farm. Seed can then be harvested. This type of system in not unlike bulking up seed of a new cereal variety. The nursery system also lessens the risk of perhaps outlaying large investment on a species that may turn out to be not particularly well suited to the area. Over more than 10 years of having producers use the nursery system as a first step screening to determine which species to grow on their farm, we have frequently seen the choice on what species to proceed with be different to that which the producer was originally considering. Once seed is harvested on-farm, other establishment options such as summer and twin sowing are opened up, but these are topics for another paper!

The Dryland Legumes Pasture Systems project is supported by funding from the Australian Government Department of Agriculture as part of its Rural R&D for Profit program, the Grains Research and Development Corporation, Meat and Livestock Australia and Australian Wool Innovation. The research partners include the South Australian Research and Development Institute, Murdoch University, the Commonwealth Scientific and Industrial Research Organisation, the WA Department of Primary Industries and Regional Development, and Charles Sturt University (Graham Centre), as well as grower groups.