The need to place phosphorus (P) and potassium (K) deeper in the soil profile to address nutrient depletion in subsoil layers where prolonged root activity and nutrient acquisition occur has been demonstrated in recent field research activity across the northern region. However, plant responses to deep placement of highly concentrated bands of P fertiliser alone or together with K has been variable, ranging from substantial yield increases in some soils but no observable response in others. The highly soluble P fertilisers triple superphosphate (TSP), mono ammonium (MAP) and di-ammonium phosphate (DAP) are generally considered to be similarly effective sources of plant-available P, but as banding becomes more prevalent, it is necessary to examine how the behaviour of P differs within these concentrated bands compared to other modes of application. Co-application of K-fertilisers in concentrated bands may also potentially have major effects on P availability in some soils, but the underlying reactions and their impact on bioavailable P are not well understood. Developing a mechanistic understanding of fertiliser-soil interactions is therefore required in order to develop effective fertiliser application strategies. The aim of this study was to quantify changes in bioavailable P and to identify what happens to the form of P when P fertilisers are applied as highly concentrated bands, either as P alone or together with co-applied nutrients such as K, and how different nutrient sources and soil types affect these reactions.

We conducted a soil-fertiliser incubation experiment to identify P reaction products and quantify bioavailable P that forms in concentrated fertiliser bands, as influenced by (i) P source, (ii) co-application of K, and (iii) soil properties. For this, we used six soils representative for the northern region; two Vertosols, one Ferrosol, one Chromosol, one Kandosol and one Tenosol plus a calcareous soil (Calcarosol) from the southern region (Table 1), along with three P forms (mono-calcium phosphate, marketed as TSP; mono-ammonium phosphate, MAP; and di-ammonium phosphate, DAP). The impact of adding K in the form of KCl (muriate of potash) into the P band was explored for the main soil types in the northern region (grey Vertosol, Kandosol, Chromosol), in addition to the calcareous soil. The P rate was 8.2 g P kg soils-1 which is the calculated P concentration in the fertosphere (the fertiliser-enriched soil within 10 mm of the band) at a P application rate in the field of 40 kg P ha-1 for bands spaced 1 m apart. The KCl was added at a rate of 20 g K kg soil-1 being equivalent in the field to 100 kg K ha-1. We have used a range of approaches to estimate how much P remained available to the plant within the band as well as to determine the fate of the P. Specifically, we measured total isotopically exchangeable P to estimate bioavailable P, used X-ray absorption near edge structure (XANES) spectroscopy to identify dominating mineral P species formed in the fertosphere and calculated the saturation index of P minerals in the fertosphere solution to obtain information on theoretically precipitated P species.

The concentrations of potentially plant-available P, measured as isotopically exchangeable P, depended upon soil properties as well as the form of P and ranged from 10 to 85% of total P applied (Figure 1). Among the seven soils, the total isotopically exchangeable P was generally highest in the more acidic Ferrosol, Kandosol, Tenosol and Chromosol (on average 54%), was lower in the two Vertosols (37%) and lowest in the Calcarosol (19%). For the more acidic soils, the isotopically exchangeable P correlated (r= 0.97) with the fertosphere solution pH and soil clay and oxalate extractable aluminium content. Comparing the P sources, the total exchangeable P was consistently lowest with TSP (29%), and generally highest with DAP (54%) and intermediate with MAP (48%). This is because the DAP causes the pH in the fertiliser band to increase, which seemingly decreases the precipitation of P into non-available forms. Thus, excluding the alkaline Calcarosol, increasing acidity of the saturated fertiliser solution resulted in more P precipitated (DAP<MAP<TSP). 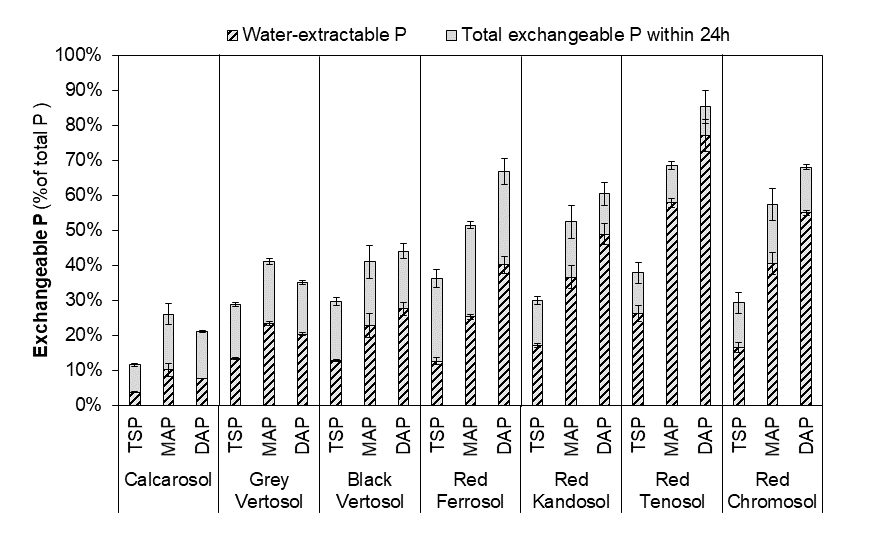 The co-application of KCl together with the P fertiliser decreased concentrations of potentially plant-available P to the greatest extent in soils with high exchangeable calcium (i.e. the grey Vertosol and the Calcarosol, Figure 2). The magnitude of this K-induced reduction in exchangeable P depended upon the form of P fertiliser applied. The largest reduction in P availability caused by K was in the Calcarosol fertilised with MAP (-15%). In the grey Vertosol, the K-induced reduction in P availability was smaller (-10%) and was similar for MAP and DAP, but the least impact was with TSP. In the more acidic Kandosol and Chromosol, only the water-extractable P concentration changed but not the total isotopically exchangeable P, suggesting that co-application of K does not affect the potentially bioavailable P in these soils. 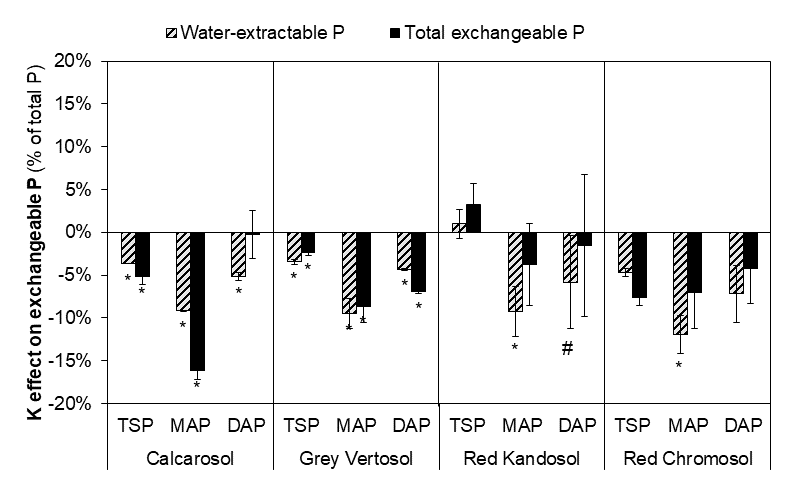 Transformation of the P fertiliser into non-available forms

When the P fertilisers are applied to soils, some of the P is changed into forms that are non-available or only of low availability – these are called ‘reaction products’. For most soils (i.e. all bar the Calcarosol), we found that aluminium-P minerals were the most important reaction products that formed in concentrated P bands. In the Calcarosol, much of the P in the band precipitated as calcium P minerals with little difference recorded among the three P forms.

We also examined what reaction products formed when K was co-applied with the P fertiliser in the band. Co-application of K changed spectral features in the non-calcareous soils, with this effect most apparent for the grey Vertosol supplied with DAP (Figure 3). A small shoulder of low intensity in the post-edge region appeared, which could possibly be due to precipitation of calcium-P. For the Calcarosol, spectral features only changed between P alone and P+K together when TSP was the form of P applied (Figure 3).  The spectral feature of soil supplied with TSP+K was very similar to that recorded when MAP or DAP were applied, regardless of K addition. This suggested that in the Calcarosol, the mineral species theoretically precipitating was not affected by K addition.

Figure 3. P K-edge XANES spectra from the Calcarosol fertilised with triple superphosphate (TSP) alone or together with KCl (left), and from the grey Vertosol fertilised with di-ammonium phosphate (DAP) alone or together with KCl. Highlighted in grey is the post-edge region. The arrow indicates the energy at which a characteristic shoulder would be seen if calcium P minerals were present.

The pH of the fertiliser solution was the most important factor influencing P availability in the band for all soil types except the Calcarosol. Our data indicate that selecting the most appropriate form of P to apply in the band can have a larger impact on potential P availability than does co-application of K fertilisers. For the non-calcareous soils, the potential bioavailable P increased with increasing soil solution pH and decreasing soil clay and soil oxalate-extractable aluminium content. This was due to a reduction in aluminium-P precipitation and specific surface adsorption of the fertiliser P. In the grey and black Vertosols, aluminium-P most likely precipitated because of the high oxalate-extractable aluminium and iron found in these soils, together with apparently low pH buffering capacity of soil solution. The co-applied K is presumed to have displaced exchangeable calcium and possibly magnesium from soil exchangeable sites, leading to precipitation of P with the displaced calcium and a decreasing in the potential bioavailable P. This effect was only recorded in the grey Vertosol and the Calcarosol.

The application of P in concentrated fertiliser bands can have production benefits, but to maximise the return on fertiliser investment it is necessary to better understand the factors that can reduce the effectiveness of these deep-applied P bands in certain soils. The data from this incubation experiment suggest that the effectiveness of banded P will differ between soils and also differ depending upon the form of P used. These differences are because some of the P converts to different forms that have lower availability. The conversion of P to these different forms (reaction products) depends upon the soil properties and the form of P applied. However, the data cannot be interpreted in terms of plant availability under field conditions at this stage, with further work needed.

The experiment was designed to understand the principle chemical reactions and to assess the transformation products within the fertosphere under steady-state conditions. The induced reactions with K are not yet fully understood but the data suggests that the principle mechanisms involve displacement of cations from the exchange surfaces of clay minerals. This results in more P precipitation in soils and is most apparent in soils with high cation exchange capacity. We hope to use the information derived from this ongoing study to prepare recommendations for fertiliser use.

The research undertaken as part of this project is made possible by the significant contributions of growers through both trial cooperation and the support of the GRDC (Project 9175500/UQ00086); the author would like to thank them for their continued support.