Spraying for RLEM could become a thing of the past

At the 2015 Crop Updates we reported that we had identified RLEM with combined omethoate (Group 1B) and synthetic pyrethroid (Group 2A) resistance and indicated that current insecticides might have limited control in the future.

The following year, we reported finding RLEM at a single location that were resistant to the organophosphate chlorpyrifos. However, further testing revealed these mites were not resistant to either omethoate, synthetic pyrethroids or methidathion.

From 2017 to 2019, the Department of Primary Industries and Regional Development (DPIRD) carried out resistance testing in Western Australia as part of a Grains Research and Development Corporation (GRDC) investment being led by the University of Melbourne, in collaboration with ‘cesar’ and the Commonwealth Scientific and Industrial Research Organisation (CSIRO). Insecticides used in the study were selected by the national team and used for resistance testing throughout broadacre growing regions of Australia. The findings for 2019 are presented in this paper.

To determine the extent of RLEM insecticide resistance in the Western Australian wheatbelt.

Agronomists were recruited to participate in a survey to determine the extent of RLEM resistance. Paddocks suspected of having a chemical failure or farms with high levels of pesticide usage were selected.

At least 2000 RLEMs were collected using a suction sampler and placed into airtight containers with moistened paper towel and plant material and then refrigerated.

The inside of 5 mL vials were coated with either:

Mites from a known susceptible source were used to compare results with the survey populations.

The inside of 5 mL vials were coated with either:

Mites from a known susceptible source were used to compare results with the test populations.

Vials were coated with the required insecticide concentration then left upside down at room temperature until the inner surface was completely dry. Once dry, a vetch leaf was placed at the bottom of each vial.

Eight healthy RLEM from each collection site were placed on top of the vetch leaf in each vial. Each treatment had six replicates.

After 24 hours, mites were counted as either dead or alive.

Mites were collected from the high- to medium-rainfall areas of WA, from Gingin to Esperance and as far west as Cowaramup. Mites were bio-assayed from a total of 73 sites with more than half of these sites (42 sites) having mites surviving exposure to either omethoate at 0.0058 g.ai/L and/or malathion at 0.5 g.a.i/L and/or bifenthrin at 0.1 g.a.i/L.

Of the 42 sites with survivors, less than half (43%) had RLEM surviving exposure to a single insecticide.

About 60% of sites with RLEM surviving the bioassays had RLEM that survived exposure to more than one insecticide:

Results from only Site 1 and Site 2 are presented here. At these sites, growers reported RLEM surviving applications of registered rates of organophosphates and synthetic pyrethroids. Compared to the control it took 100 times more omethoate at Site 1 and 10 times more omethoate at Site 2 to kill RLEM (Figure 1). For chlorpyrifos, there were survivors at both sites even at 10 000 times the rate that killed RLEM in the susceptible population (Figure 2). 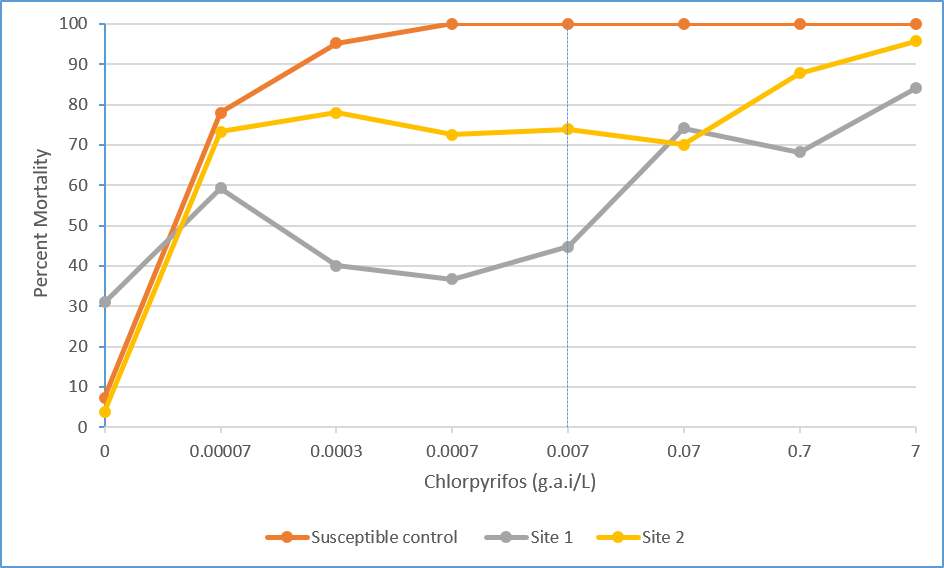 Organophosphates such as omethoate (Group 1B) and synthetic pyrethroids such as bifenthrin (Group 2A) cannot be relied on effectively control RLEM in the long-term. Alternative control measures need to be considered such as:

For further information refer to the Resistance Management Strategy for RLEM at: https://grdc.com.au/FS-RLEM-Resistance-strategy

The research undertaken as part of this project is made possible by the significant contributions of growers and agronomists. The authors would like to thank them for their continued support.