Australia’s climate is warming, including an increase in average temperature, increase in number of days exceeding 35°C and a decrease in rainfall (CSIRO and BOM, 2015).

But what is happening at Mullaley? How will this affect the crops I grow? What can I do to manage this change?

These are some of the questions we have tried to address.

Current climate was compared with historical climate using a climate normal approach to compare overlapping 30-year time periods. This is recognised as the most statistically sound method to determine if a change in climate has occurred (Arguez and Vose, 2011) and is recommended by the World Meteorological Organisation’s standard for placing current climate conditions in a historical perspective. A simulation analysis of sorghum production in response to a range of initial soil water and sowing dates was then conducted using APSIM (Holzworth,2014) to identify whether changing these management practices could mitigate the effect of any changes in climate.

How is the Mullaley environment changing?

Figure 1. Sum of rainfall for each 30-year climate normal period on an annual (A) and cropping season (B) basis at Mullaley. The results show how rainfall has changed over time. In general, there has been little change in rainfall over the study period. A decline in summer rainfall has been compensated by a slight increase in winter rainfall.

Figure 2. Sum of daily average temperature on an annual (A) and cropping season basis at Mullaley. Average temperature showed a continual increase in heat to the most recent climate normal (1988-2017). The change in accumulation of heat was similar in both summer and winter growing seasons.

How will these changes in climate affect sorghum?

Higher temperatures increase the rate of crop development and the amount of water transpired by the crop. If rainfall remains stable or decreases then this will increase the chance of moisture stress occurring in the crop. However, if the growing period of the crop can be matched to the timing of rainfall then it may be possible to maintain or increase crop grain yield despite an annual reduction in rainfall.

To identify whether the yield potential of sorghum crops had changed over the last 60 years a series of simulations were undertaken. The 60-year period from 1958-2017 was used for this analysis and sub-divided into two climate normals – 1958-1987 and 1988-2017 - that could be compared.

Water stored within the soil helps to buffer crops from variability in the climate. In order to understand the effect on yield of changes in the climate, the median yield from a crop sown into a full profile of water was compared across the 60-year period. This approach was expected to demonstrate the least difference between the two climate normal periods, because each site by sowing date combination had optimal soil water at sowing. The study was completed for a selection of locations (‘transects’) in both the eastern and western parts of the GRDC northern growing region (Figure 4).

For northern sites of the western transect (from Mungindi north) there was little change in yield except for a reduction in yield of around 0.5 t/ha at the extremes of early sowing and late sowing (Figure 4). For the northern sites of the eastern transect there was a clear reduction in yield for sites north of Goondiwindi, especially for sowing dates before November. For the eastern transect there were distinct groupings of change in yield: improved yield between Goondiwindi and Moree for crops sown between November and January, and decline in yield on the Liverpool Plains that worsened with later sowings and culminated around a mid-December plant. 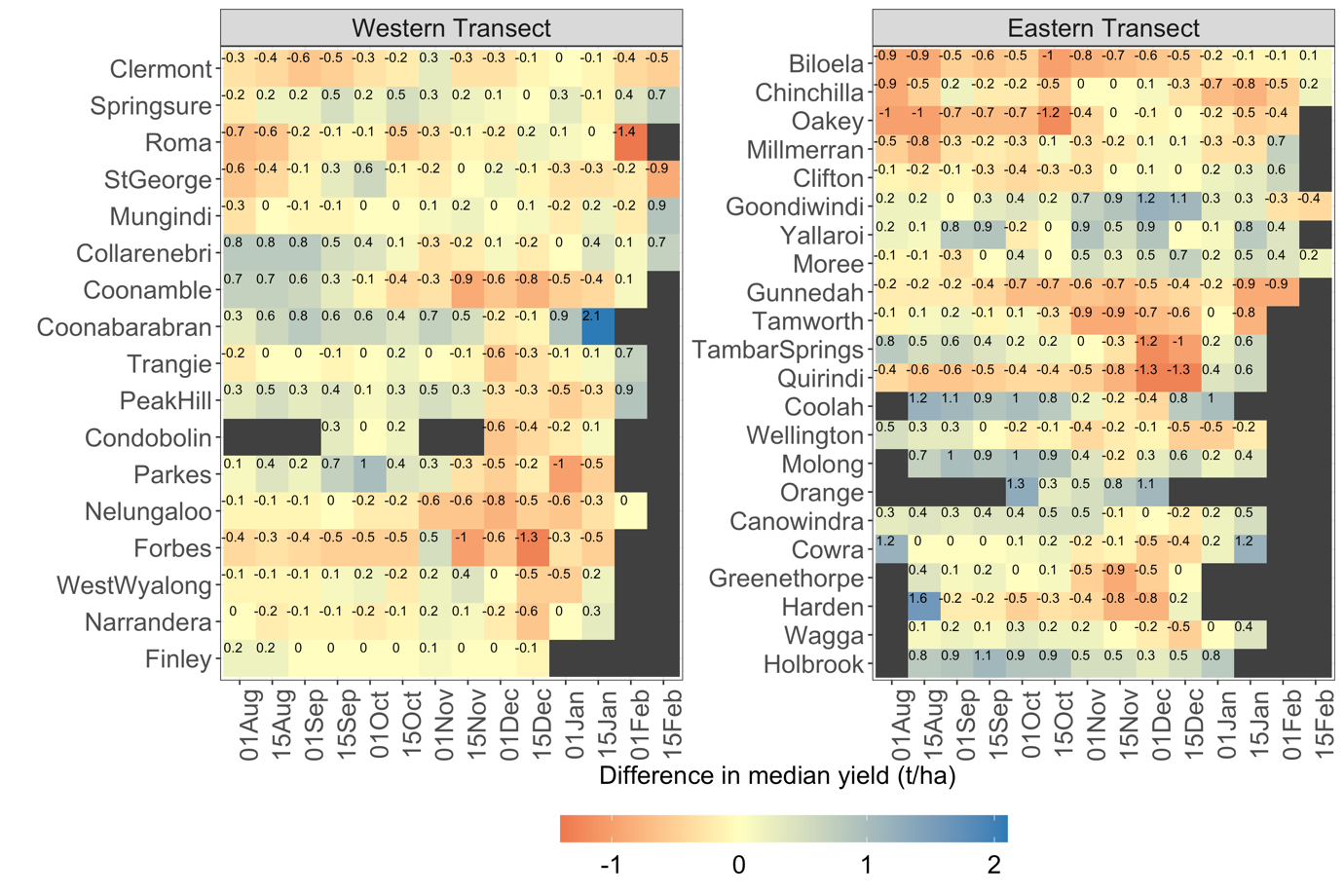 Figure 4. Difference in median yield of sorghum crops between climate normals 1958-1987 and 1988-2017 when sown into a full profile of water, for different sowing dates for locations divided into western and eastern transects. Red shading in cells indicates a decrease in yield, blue indicates an increase, and yellow indicates sowing dates where there was minimal to no difference in crop yield. Only median yields from sowing dates that had fewer than 50% failed crops are included (other location-sowing date combinations were considered unsuitable for crop production and are coloured black). Values within each cell are the difference in yield between the climate
normals (t/ha).

What has been the effect of changing climate on yield when there isn’t a full profile of soil water at sowing?

The objective of simulating sorghum crop yields in response to a full profile of water in the previous step, was to understand whether the most recent 30-year climate normal period was different to the previous 30-year normal in terms of its effect on crop yield. However, it can be inefficient to wait for a soil profile to fill because producing adequate crops regularly, can more be financially rewarding than waiting for ideal conditions (such as a full soil water profile) to occur. In this section we present results for crops sown into a profile with an initial amount of 100mm of available soil water. This amount is towards the lower end of soil water that would be present when a decision to sow occurs (the general sowing rule for western sites (west of the Newell highway) is commonly, 150mm of plant available water). In the eastern sites with higher rainfall 100 mm is more common. The use of 100mm for both transects is a compromise.

There was an increase in crop failures (cells shaded black) between crops sown on a full profile of soil water (Figure 4) and those sown into a profile containing 100mm (Figure 5). This difference in initial soil water also explains the use of wide row configuration and 150 mm soil water trigger that is used by many grain growers along the western transect. However, despite these differences in yield arising from differences in initial soil water. The general patterns of changes in yield and optimal sowing dates between climate normals were the same. There were minimal differences in yield between climate normals for the north-western sites, but a decrease in yield potential for the eastern sites. The November to mid-January sowing dates between Goondiwindi and Moree continued to demonstrate an increase in yield for the more recent normal, while later sowing in the Liverpool Plains continued to demonstrate a yield reduction. 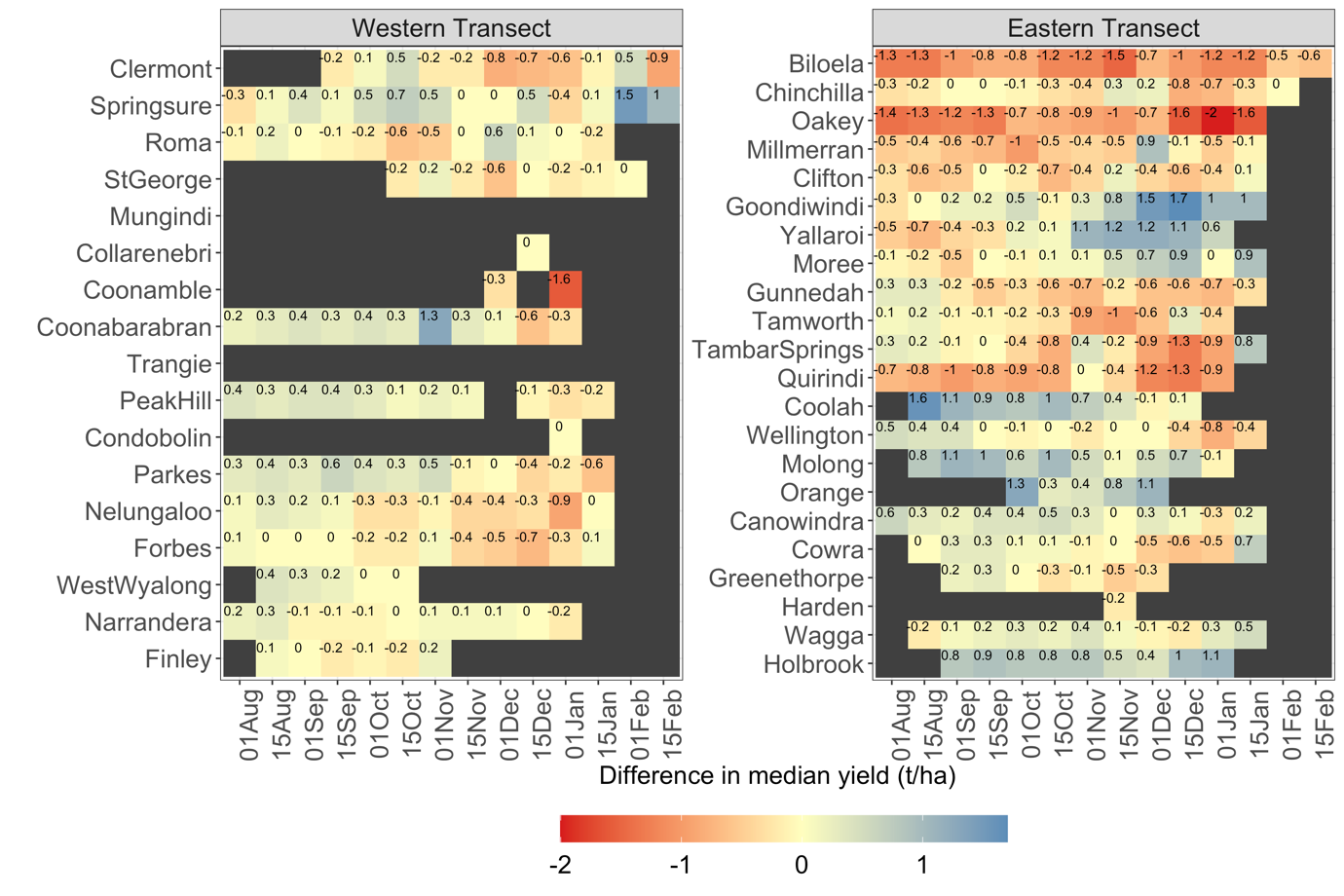 Figure 5. Difference in median yield of sorghum crops between climate normals 1958-1987 and 1988-2017 when sown into a profile of 100mm of water, for different sowing dates for locations divided into western and eastern transects. Red shading indicates a decrease in yield, blue shading indicates an increase in yield, and yellow shading indicates sowing dates for each location with minimal to no difference in yield. Only median yields from sowing dates that had fewer than 50% failed crops are included (other location-sowing date combinations were considered unsuitable for crop production and are coloured black). The values within each cell specifies the magnitude of the difference in yield between the climate normal periods (t/ha).

Why are yields changing?

The availability of water to the crop is the key determinant of yield in Australia. The value of stored soil water is its ability to buffer the demands of the plant in between rainfall events and ensure optimal plant growth. The timing and size of rainfall events are critical to maintaining this buffer as is the specific soil type. In general, the quantity of in-crop rainfall decreased or remained neutral across locations in both eastern and western transects, although there was an increase in in-crop rainfall at a few locations (e.g. Coonabarabran, Goondiwindi and Yallaroi for some times of sowing). These locations are those that showed an increase in water limited yield potential (Figures 4 and 7), and highlight that this increase in rainfall pattern has directly resulted in increased yield.

Mullaley being at a similar latitude to Gunnedah is assumed to behave in a similar way, though being slightly west the magnitude of the differences could be less but not as great as in Coonabarabran. 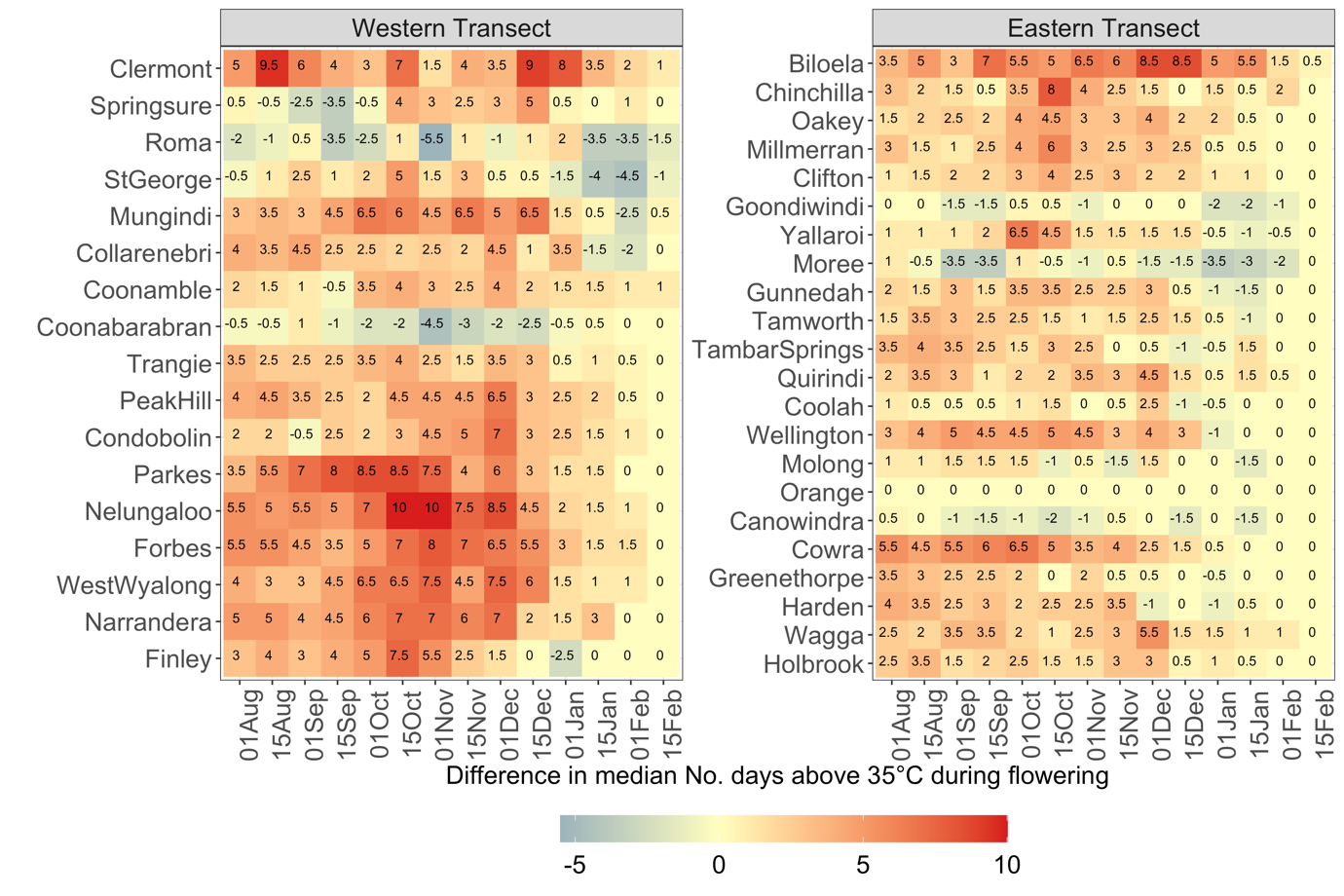 So, what does it mean and what can I do?

The climate of Australia’s sorghum production area has changed, with increases in the average daily temperature, an increase in the number of days with extreme temperatures during flowering, and a decrease in in-crop rainfall for many locations. These changes have resulted in an overall reduction in crop yield potential. However, despite this decrease the yield potential has not been reduced to a point where it is no longer economical to grow sorghum.  Good agronomy and the use of high soil water triggers at sowing will help maintain profitable returns under changing climates. For sites that had an increase in yield for some sowing dates, this could be traced to increased rainfall and a decrease in extreme temperatures during flowering. However, these increases were relative only to the areas historic production and not an increase above traditionally high yield regions. Thus, despite a decrease in the yield potential over the study period for many areas, this decrease was too small to cause a noticeable shift in sorghum production areas, and so NSW is not the new central Queensland for sorghum production.

This work was completed as part of the GRDC summer cropping project (CSP1806), a collaboration between CSIRO and GRDC.