Tasmanians are on the frontline of fungicide resistance – what options are available to ‘slow the train’?

What is the difference between resistance and reduced sensitivity?

When fungal disease is termed as sensitive to fungicide it is considered that the fungicide will control the disease pathogen at specified label rates.

Reduced sensitivity means that the fungicide does not work optimally to control the fungal pathogen, but does not completely fail. In most cases, this is related to small changes in the pathogen at the target site where the fungicide binds to the fungus. It typically results in small reductions in product performance, which may not be noticeable at the field level. In some cases, for example with Group 3 DMIs against STB, growers may find that they need to use increased rates of the fungicide to obtain the previous level of control. Reduced sensitivity must be confirmed by laboratory analysis.

What is the current status of fungicide resistance and reduced sensitivity in Tasmania and Australia?

Over the last eight years the Fungicide Resistance Group (FRG) (Centre for Crop and Disease Management, (CCDM at Curtin University) has been working with industry and other researchers to establish a fast and cost-effective monitoring system for fungicide resistance of common diseases of broad acre grain crops. Current cases of fungicide resistance and reduced sensitivity in Australian broadacre grain crops are outlined in Table 1. At present the key pathogens of concern to Tasmania are wheat and barley powdery mildew (WPM, BPM), and Septoria tritici blotch (STB). For the near future the development of resistance in the net blotch and Ramulariapathogens are of primary concern, in addition to the potential for QoI resistance in the STB pathogen.

Group 11 QoIs (strobilurins) are at the highest risk of pathogen resistance development, particularly the pathogens responsible for STB in wheat, Ramularia in barley and powdery mildew in barley.

Group 7 SDHIs are at moderate – high risk of pathogen resistance development, with evidence in New Zealand and Europe of pathogen shifts in sensitivity and resistance to this fungicide group in Ramularia leaf spot in barley and STB populations in Europe.

Group 3 DMIs Demethylase Inhibitors (DMIs – triazoles) are generally considered at low-moderate risk, however recent developments in WA have challenged this view with regard to the two net blotch forms. In these cases, pathogen mutations have resulted in the DMI fungicide target site gene (Cyp51A gene) “over producing (expressing)”, resulting in multiple copies of the mutated gene, leading to highly resistant strains of net blotch.

In Tasmania where the use of fungicides is more intensive, the field performance of commonly used Group 3 fungicides, such as flutriafol and tebuconazole, has been compromised by more resistant strains of the STB pathogen. Despite the dominance of the R8 or Isoform 11 strain, other triazole fungicides still appear to be effective in the field, although it is understood that their effectiveness may decline over time. Recent work at the Hyper Yielding Cereals (HYC) research site (Hagley, Tasmania) based on seed treatment and three fungicide applications have shown good levels of disease control when fungicide programs were applied, indicating that fungicides are still effective in the Tasmanian environment (Figure 1). Even though this disease management program was based on a seed treatment and three foliar fungicides, no more than one SDHI and one QoI application were applied. Over the last two years in Tasmania this HYC trial series has shown that fungicides are still effective if used correctly and their use has given good economic returns (Figure 2). This illustrates that if we can protect our fungicides by adopting anti resistance guidelines they can still be profitably applied. 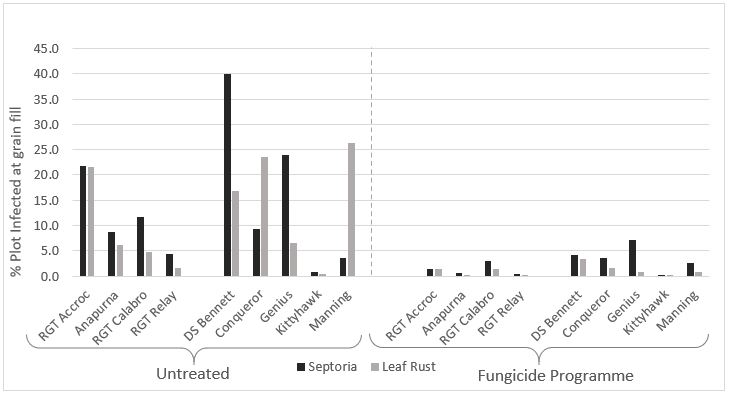 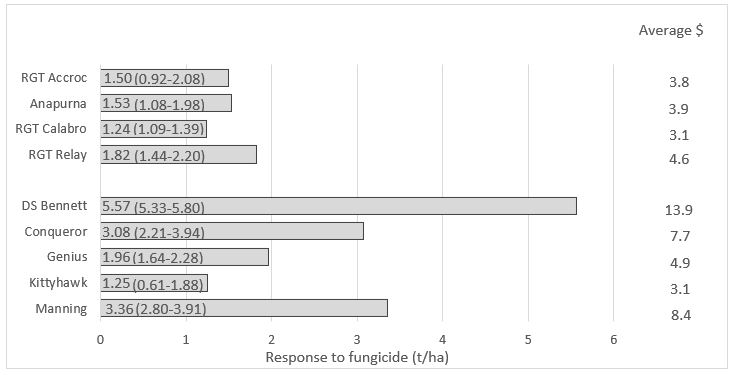 Figure 2. Yield (t/ha) and economic response to fungicide in nine cultivars of wheat under supplementary irrigation ($ return for $ spent) – mean of 2018 & 2019 Hyper Yielding Cereals research site, Hagley, Tasmania.
n.b. Economic return from fungicide (two-year average of dollar back for every dollar spent) calculated based on $350/t price for feed wheat and total costs of fungicide at $95/ha and 3 applications at $15/ha totalling $45/ha.

Early in 2017 researchers at the Centre for Crop & Disease Management led by Dr Fran Lopez discovered strobilurin (Quinone outside Inhibitors (QoI) – Group 11) resistance in WPM Blumeria graminis f. sp. tritici. The resistance was discovered in samples from susceptible varieties grown in southern Victoria and Tasmania. This was the first case of QoI resistance in broad acre cereal crops in Australia. The single point mutation that confers this resistance (G143A mutation) is the same mutation that exists in the WPM pathogen populations in Europe, discovered two years after these products were introduced in 1996. It is a single step to resistance and means that QoI or strobilurins, irrespective of active ingredient, won’t give control. In the states of Tasmania, Victoria and SA, we know that in paddocks dominated by strobilurin resistant strains, WPM will no longer be effectively controlled by Group 11 QoIs (azoxystrobin (e.g. Radial®, Tazer XpertTM, Amistar Xtra®) and pyraclostrobin (Opera®)). However, with the triazoles there is a further complication in that, in Victoria, NSW and Tasmania the ‘gateway’ mutation Y136F has also been discovered in WPM populations. This is a mutation that whilst it is unlikely to affect the field performance of triazole fungicides against WPM, it will enable the population to develop more serious mutations (hence the term ‘gateway’). As a result, reduced sensitivity in the WPM population to triazoles is likely to develop, albeit quite slowly in comparison to QoI resistance, since it is a multistep resistance, based on accumulating multiple mutations (multi-step resistance).

In BPM, resistance to Group 3 DMIs is based on mutations that would have more effect than the gateway mutations in wheat, however at present Group 11 QoI resistance in the BPM pathogen has not yet been discovered.

Clearly, the best way to avoid fungicide resistance is not to use fungicides! However, in high disease pressure regions such as Tasmania, this is easier said than done. When a cultivar’s genetic resistance breaks down or is incomplete, it is imperative that growers and advisers have access to a diverse range of effective fungicides (in terms of mode of action) for controlling the disease. With wheat and barley crops, multiple applications of fungicide are commonplace in Tasmania, so it’s important that we adopt anti-resistance measures in cereal crops to preserve the life of our fungicides for as long as possible into the future. So, what can we do to ‘slow down the resistance train’?:

Growers and agronomists frequently ask the question whether dose rates have an impact on how likely fungicide resistance is to evolve. Resistance comes in many forms and trying to manipulate rates with fungicides should not be seen as the core resistance management strategy.

The reality is that using the most appropriate rate for effective disease control is the best strategy for managing resistance. Label rates have been developed to provide robust and reliable control of the target disease.

In many cases the full label rate is the most appropriate rate for control. However, for some diseases, the lower rate from the label range of a fungicide can be used in conjunction with a crop variety that has a good disease resistance rating because disease pressure will be lower. Contrary to what might be the case with other agrichemicals, there is evidence that by using a higher rate than necessary this increases the risk of resistance, as removing all of the sensitive individuals provides more opportunity for resistant individuals to dominate the population and hence be the strain colonising the plant. This is particularly the case with Group 11 QoIs and Group 7 SDHIs fungicides.

The Australian Fungicide Resistance Extension Network (AFREN) was established to develop and deliver fungicide resistance resources for grains growers and advisers across the country. It brings together regional plant pathologists, fungicide resistance experts and communications and extension specialists.

AFREN wants to equip growers with the knowledge and understanding that they need to reduce the emergence and manage the impacts of fungicide resistance in Australian grains crops.

As members of AFREN, the authors of this paper are keen to hear if you believe you are encountering reduced sensitivity or resistance in your broad acre crops in Tasmania.

We would also like to acknowledge the work of our co-workers and collaborators in AFREN, in particular, Dr Kylie Ireland and Dr Fran Lopez from the Centre for Crop and Disease Management (CCDM). For more information on AFREN and fungicide resistance – Contact: Dr Kylie Ireland (08) 9266 3541; afren@curtin.edu.au or the authors (see Contact details section).