Long term continuous cropping systems can be very profitable when managed well, however continuous cropping is prone to several key issues which decrease profitability and increase risk; including soil fertility decline, increasing grass weed pressure and herbicide resistance, soil and foliar disease build up in single crop systems. Many of these issues cannot be adequately addressed in a single year break cropping situation. A trend of declining spring rainfall in southern NSW is also expected to increase the risk of all-crop systems.

To improve the sustainability and profitability of cropping systems in southern NSW, many growers have chosen to replace their usual grain crop in lower performing crop paddocks with an alternative ‘non-grain’ crop, forage or pasture for one year, as a way of addressing some of the issues outlined above. The choice between brown manure, long fallow, sacrifice crop, mixed-species cover crop or other alternative is based on variables including financial considerations, location, climate, soil type, access to livestock and suitable livestock infrastructure.

The factors common to each of the mentioned cropping tactics are:

There are benefits of replacing a grain cash crop with a non-grain crop accrue, both at the paddock level and at the broader farm business level, especially when a system is adopted across a portion of farm area each year. Benefits may compound by following a brown manure or non-grain crop option with another break crop, such as canola. This ‘double-break’ is extremely effective at managing grass weeds and cereal root diseases. Positioning canola after a brown manure or long fallow also decreases risk for canola by providing additional nitrogen and PAW, ensuring canola is more likely to be established at the correct time.

Potential benefits at the paddock level:

There can be logistical issues involved with ‘non grain’ options, including sourcing of seed, or trouble sowing through heavy pulse stubbles. These will vary between farms based on location, machinery and management priorities. History suggests that once growers are convinced a practice is worthwhile, a solution will soon to be found to the technical and logistical issues.

Many of the cited limitations to adopting a brown manure (or similar) system are associated with FOMO (the fear of missing out). The most commonly cited reasons not to brown manure a paddock are cash flow constraints or the opportunity cost of not cropping that paddock in the current year.

Cash is critical to business. While it may seem that a paddock not producing grain is negative to cashflow, brown manure crops tend to have much lower input costs compared to cash crops, especially when those crops require expensive grass herbicides or urea to achieve their yield potential. A typical brown manure crop might cost $100/ha from sowing until termination, compared to a cereal crop targeting 2.5 t/ha which could cost between $200 and $300/ha up to harvest. The first year with decreased grain area is certainly the hardest. From the second year onwards, the benefits from previous brown manure crops generally outweighs initial decreased harvested area resulting in greater returns/ha over time.

Many vetch growers use hay as a strategic cashflow tool. In dry years, when other grain yields are likely to be lower and cashflow tight, vetch is made into hay, capitalising on higher hay prices in those years. In better years, when there is adequate income generated from other crops, the vetch is brown manured, reducing nutrient removal, leaving more nitrogen, more PAW and better groundcover.

For those with livestock of their own, or access to agistment, mixed species forage crops can provide many of the same benefits as straight brown manures, with cashflow from livestock. This is heavily dependant on location and individual situation.

“I could grow a four-tonne barley crop there”. Typically, this argument over-estimates the yield and the price, underestimates the cost of growing a cash crop and does not account for any future yield increases or cost savings associated with the brown manure. Rather than using a farm average grain yield, or aspirational yield target, the analysis should be done using the worst paddock on the farm. Typically, the lowest performing paddock on any farm will have a very low profit margin in most years and may possibly be costing the business money. By starting with a poor performing paddock first, the opportunity cost is minimised. This allows the brown manure program to commence with less impact on cashflow.

A group of paddocks in 2016, all sown to barley, except the two least productive paddocks (due to grass weed populations), which were sown to field peas and brown manured ($100/ha cost). 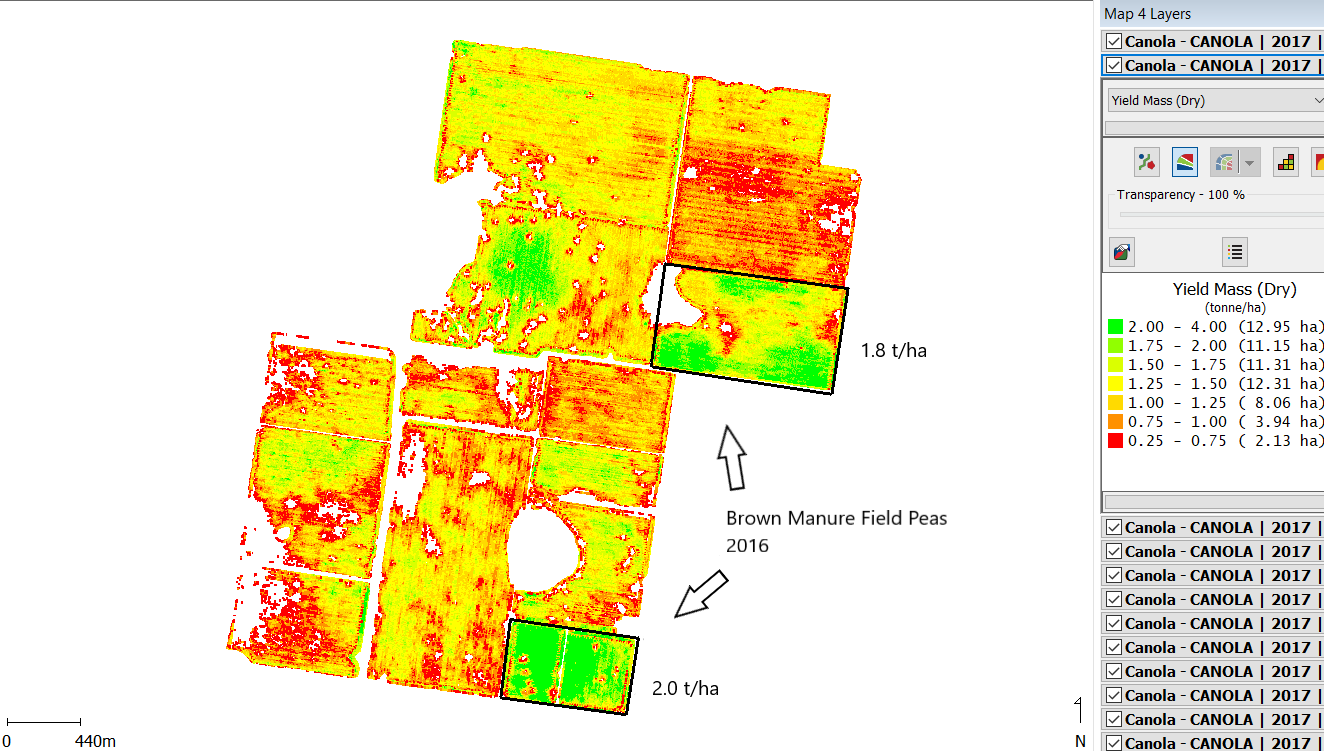 Figure 1. Yield map of paddocks highlighting difference in yield between brown manure fields and rest of the property.