One of the major challenges facing the mungbean industry has been meeting current and projected demand for the crop when yields can be unpredictable and fluctuate considerably from season to season. Abiotic stress, mostly high temperatures and drought stress limit mungbean (Vigna radiata L. Wilzcek) growth and production potential, particularly when stress occurs during flowering and pod filling. Mungbeans in the Northern Grains Region are traditionally planted from September through to November for a spring planting, or from December to January for a late summer plant, exposing them to periods of heat and moisture stress. Mungbeans are typically grown under rainfed situations due to their short duration and lower water use compared with other summer crops. Dry conditions through the crop cycle are common meaning crops are often planted on low stored soil moisture (<90mm plant available water) with little in-crop rain, resulting in terminal drought stress or drought stress during the later stages of reproductive growth. Chauhan and Rachaputi (2014) found that mungbeans experience drought in 58-68% of years depending on the location and soil plant available water (PAW), and also reported up to 55% of growing areas can be affected by mid-season or severe terminal drought stress with water availability declining approximately a week before flowering.

Crop response to water deficits are largely based on the stage of development when drought stress occurs. Drought stress is multidimensional and can impact the morphological and physiological processes that drive crop growth, productivity and grain quality (Bangar et al., 2019). While mungbeans are tolerant of drought conditions compared with other crops, the timing of water deficits can still have a significant impact on crop productivity. Robertson (1934) defined the critical period for yield determination as the physiological stage in which abiotic stressors have the largest impact on yield determination. The reproductive phase of most legumes, including mungbeans is considered the critical period for yield determination (Lake & Sadras, 2014). However, the impact of abiotic stress, particularly water deficits, during this period in comparison with other development stages is largely unknown.

The aim of this experiment was to investigate the critical period for moisture stress vulnerability and the impact of drought stress at different phenological stages on the final grain yield of mungbeans. The outcomes of this experiment will help to develop a deeper understanding of how mungbeans respond to drought stress and how we can improve our agronomic management to maximise grain yields.

A pot trial was established in a lysimeter facility at The University of Queensland, Gatton Campus. The lysimeter system is housed in a shade house covered by Solarweave® material that excludes rain and some direct solar radiation (Chenu et al., 2018). Individual lysimeters consist of a large 51 L pot placed on a load cell enabling automatic weighing and watering every 10 minutes (Figure 1). Target pot weights were consistent across all lysimeters, allowing for water deficits to be controlled. Each pot was lined with a plastic garbage-bin liner and filled with a 1:3 mix of black vertosol and washed river sand to facilitate adequate soil drying and covered with insulation material cut to the same diameter of the pots to reduce surface evaporation. A basal fertiliser treatment of Granulock® at an adjusted rate of 25kg/ha was applied to each pot pre-planting. A second application of Granulock® Z was made at the appearance of first flower to avoid any nutrient deficiencies. Three varieties of mungbeans; Jade-AU, Crystal and Celera II-AU were inoculated using Group I peat (Bradyrhizobium spp.) inoculant and planted on 10 February 2020 in a randomised complete block design with four replications and four treatments. The treatments were: well-watered to 80% field capacity for the duration of the experiment (WW), drought stress during the vegetative growth phase (V), drought stress during flowering (F) and drought stress during pod-filling (PF). Pots undergoing a drought stress treatment were not watered during the treatment period unless soil moisture dropped below 40% field capacity. Soil dry down was progressive during the stress period (Figure 2). The plants were harvested when ~90% of the pods were dark brown to black and separated into harvest components (leaves, stems and pods) and dried at 65°C for five days to obtain dry weight (DW) of each component. 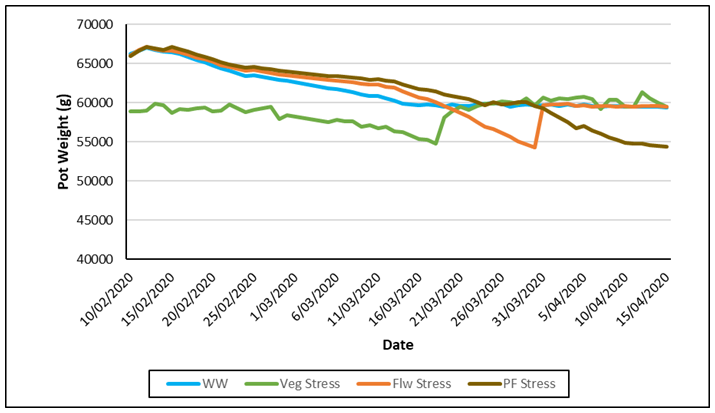 Figure 2. Average lysimeter pot weights (g) measured for the duration of the experiment. The initial peak in weight occurred from the watering up process. The vegetative stress treatment (green line) was not initially watered to field capacity to facilitate adequate dry down while water demand was low during the vegetative growth phase.

Daily minimum and maximum temperatures during were relatively mild with no significant heat events (>40°C) in any of the growth stages (Figure 3). The optimum temperature for mungbean growth is 28-30°C and for the duration of the experiment conditions were ideal for facilitating growth without periods of heat stress. 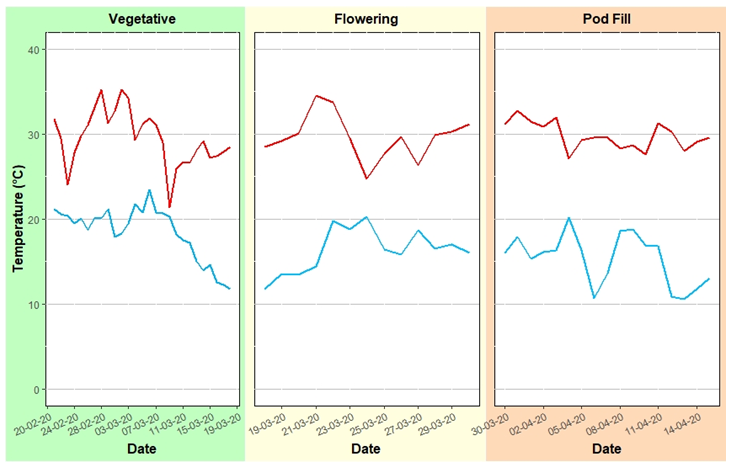 Shoot weight (weight of leaves and stems) declined significantly in response to early pod-filling water deficits compared to plants under both well-watered and vegetative/flowering stress. Shoot weight under terminal water stress (pod-fill water deficits) was affected by decreased leaf initiation/expansion and potentially increased rates of leaf senescence. Compensatory vegetative growth occurred when stress was imposed in earlier growth phases, i.e., during vegetative and flowering; however this response varied across varieties. Jade-AU produced considerably higher total shoot dry matter than Celera II-AU or Crystal (Figure 4), but was more severely affected by drought stress during pod-filling with a >20 g dm/plant dry mass reduction. Crystal and Celera II-AU had lower shoot dry mass reductions of 12 and 10 g dm/plantrespectively.  Shoot biomass across all three varieties was reduced during the vegetative or flowering phases by 5 g dm/plant. Contribution of assimilates supplied from the stem reserves can increase by up to 40% in drought stress situations (Sehgal et al., 2018) and combined with more rapid leaf senescence to remobilize assimilate reserves to grain may also explain the decline in shoot dry matter from the well-watered treatment to the pod filling treatment. 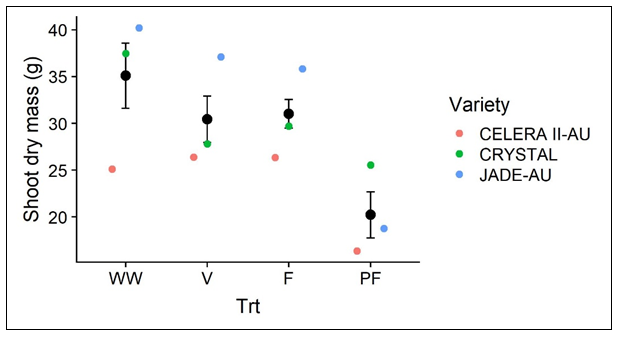 Drought stress decreased new leaf production when drought was introduced in the vegetative growth period and accelerated senescence under stress in the later reproductive phases (Figure 5). Leaf appearance and growth continues after flowering in mungbeans for most commercial varieties hence the total weight and number of leaves (data not shown) in this experiment was not affected by drought stress up until early pod fill however drought stress from early pod-fill to maturity significantly affected leaf weight (p<0.001, Figure 5a). Leaf senescence was accelerated when plants experienced water deficits from early pod fill through to maturity (Figure 5b) compared with earlier drought stress. 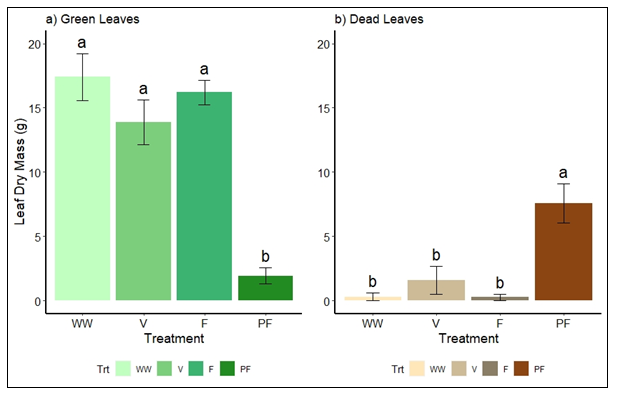 Figure 5. Contribution to total leaf dry weight by green leaves (a) and dead leaves (b) at the time of harvest (error bars are standard error) for the treatments well-watered (WW), vegetative drought stress (V), flowering drought stress (F) and pod-fill drought stress (PF). Treatments with the same letter are not significantly different at α0.05.

Terminal drought stress can reduce the duration of flowering and pod-fill and the capacity for the plant to produce a large number of flowers and pods thereby reducing overall grain yield (Farooq et al., 2017). There was a significant decline in the number of pods produced under early pod-fill stress with a reduction of 10-35% in total pod number compared with the well-watered treatment (Figure 6). This decrease is likely due to increased rates of flower and pod abortion. Interestingly, the vegetative and flowering stress treatments set more pods than the well-watered treatment. Non-limiting water conditions can lead to prolonged vegetative growth meaning the switch from vegetative to reproductive sinks possibly was slower, resulting in fewer pods.  Celera II-AU produced consistently higher numbers of pods per plant for each treatment followed by Jade-AU with Crystal producing the fewest pods.

While the goal of the experiment was to synchronise flowering across the varieties, the precise start of flowering may have varied between varieties by several days, and therefore the treatments may not have captured the full impact of drought stress on varietal development equally. In a simulation study, Muchow and Sinclair (1986) found that earlier maturing varieties can yield more than later maturing varieties by at least 40% under drought conditions despite lower biomass accumulation (Figure 4). This may explain why Celera II-AU was able to produce up to 24% more pods than Jade-AU or Crystal. 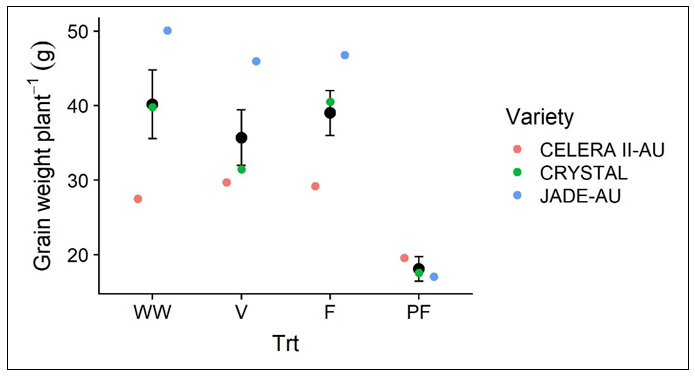 Individual grain weight was relatively stable for the well-watered and earlier drought stress treatments, averaging 5.0 - 5.5 g/100 seeds. However, 100 grain weight increased for Jade-AU and Crystal when drought stress was imposed during pod-filling. Pod abortion and flower shedding during early pod-fill coupled with increasing dehydration and early leaf senescence may have accelerated assimilate remobilisation from vegetative tissue and subsequent availability to developing grains.  The reduced number of pods (Figure 8) produced may indicate assimilate remobilisation was redirected to the remaining pods, increasing individual grain size to compensate for grain yield lost due to lower pod and grain numbers. Figure 8. 100 grain weight measured for Celera II-AU, Crystal and Jade-AU when subjected to drought stress during different stages of growth and development.

Grain yield was strongly driven by grain number for all three varieties with differences in seed size driving the difference in grain number/grain weight for each variety (Figure 9). Celera II-AU produces a large number of smaller sized seed therefore grain yield was not as high as the larger-seeded varieties Jade-AU and Crystal. Drought stress during pod-fill reduces pod and grain number and while individual grain weight increased under drought stress (Figure 8) yield is still limited by the total number of grains produced. Figure 9. The relationship between grain weight (g/plant) and grain number for Celera II-AU, Crystal and Jade-AU.

The research undertaken as part of this project is made possible by the significant contributions of growers through both trial cooperation and the support of the GRDC, the author would like to thank them for their continued support. This project is a co-investment by GRDC and the Queensland Alliance for Agriculture and Food Innovation, University of Queensland.

The authors would also like to acknowledge the technical assistance of Mr Joel Buningh during the trial which was greatly appreciated.