In rainfed environments typical of the eastern and southern wheatbelts, crops are typically sown on the first breaking rains but sometimes soil moisture accumulated on the last rainfall event(s) prior to sowing is too deep for sowing with conventional varieties and drilling systems. Key to good leaf area development for tillering, growth and weed competitiveness is good crop establishment. An ability to establish wheat crops from seed placed 80mm or deeper in the soil would be useful in situations where the subsoil is moist but the surface dry. Seeding onto moisture at depth extends the opportunities for a greater portion of the cropping program to be sown within the targeted sowing window. A separate but concerning issue is the influence of increasingly warmer soil temperatures on reductions in coleoptile (the shoot that grows from the seed and allows seedling emergence through the soil) length. Earlier sowing into warmer soils will reduce coleoptile length by as much as 60%, so that a variety such as Mace with a 75mm coleoptile at 15°C will likely have a 40mm coleoptile at 25°C soil temperature. Some seed dressings and pre-emergent herbicides also reduce coleoptile length with capacity to amplify adverse impacts on crop establishment.

The green revolution Rht-B1b and Rht-D1b dwarfing genes reduced plant heights to reduce lodging and increase grain yields and so are present in most wheat varieties worldwide. Their presence also reduces the length of the coleoptile by as much as 40%. This reduces crop emergence when sown at depths greater than 50mm, tiller number and leaf size to reduce water-use efficiency and weed competitiveness.

A range of alternative dwarfing genes have been identified in overseas wheats with potential to reduce plant height and increase yields while maintaining longer coleoptiles and greater early vigour. Some of these genes (e.g. Rht8 and Rht18) have been used commercially overseas but had not been assessed for use here in Australia. We reduced the larger global set of alternative dwarfing genes to Rht4, Rht5, Rht8, Rht12, Rht13 and Rht18, and then developed linked DNA-markers to assist with breeding of these genes in a commercial breeding program. Separately, we then bred these genes using conventional and DNA-based methods into the old, tall wheat variety Halberd for testing and disseminating to Australian wheat breeders. 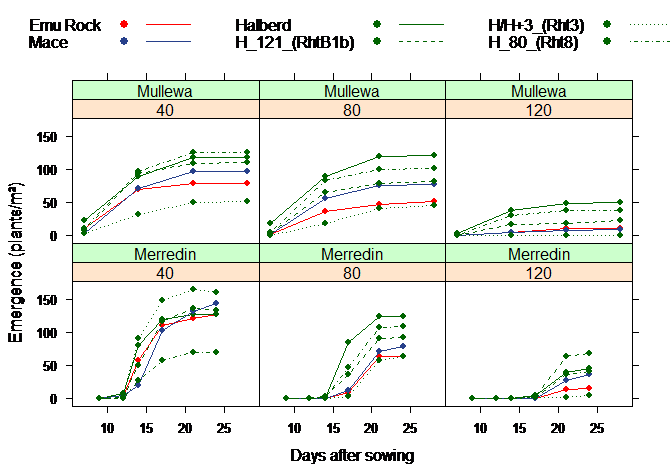 Figure 1. Patterns of emergence of wheat genotypes with different dwarfing genes sown at target depths of 40, 80, or 120mm at Mullewa and Merredin in 2016 (after French et al. 2017).

A proof-of-concept’ study was undertaken in 2020 on a grower’s farm at Southern Cross in the eastern wheatbelt of WA. The experiment was sown using grower planting equipment - the seed-bin was modified on a Gessner Landmaster® planter containing curved points permitting sowing of small experimental seed-lots to depths of up to 200mm. Plots of size 60 × 4.5m were sown in a two-replicate experimental design at two sowing depths: 40mm (dry-sown) and 120mm (sown into moisture at the depth of sowing)(Figure 3). Genotypes included long coleoptile Mace, Magenta

and Yitpi, breeding lines and commercial varieties Mace and Scepter. Sowing occurred on 5 May 2020. Aside from 115mm rainfall in January, the season was a decile 1 for rainfall with only 76mm rainfall in-crop.

Seedlings were first observed on 14 May and 5 June for the 120mm and 40mm sowing depths, respectively. Long coleoptile wheats (including the old, tall variety Halberd) emerged well with deep sowing in contrast to short coleoptile varieties (Figure 4), while all lines and varieties established well in the 4cm sowing depth following early June rain. Earlier emergence with the deep sowing translated into greater height and more fertile spikes at flowering (Figure 5), and earlier maturation than for the later emerging dry-sown treatments. Grain yield data is currently being processed.

Figure 3. Early emergence with deep sowing of the long coleoptile Mace and Magenta, and tall variety Halberd. Dry-sown Mace at 40mm did not emerge until after June 5 rains. 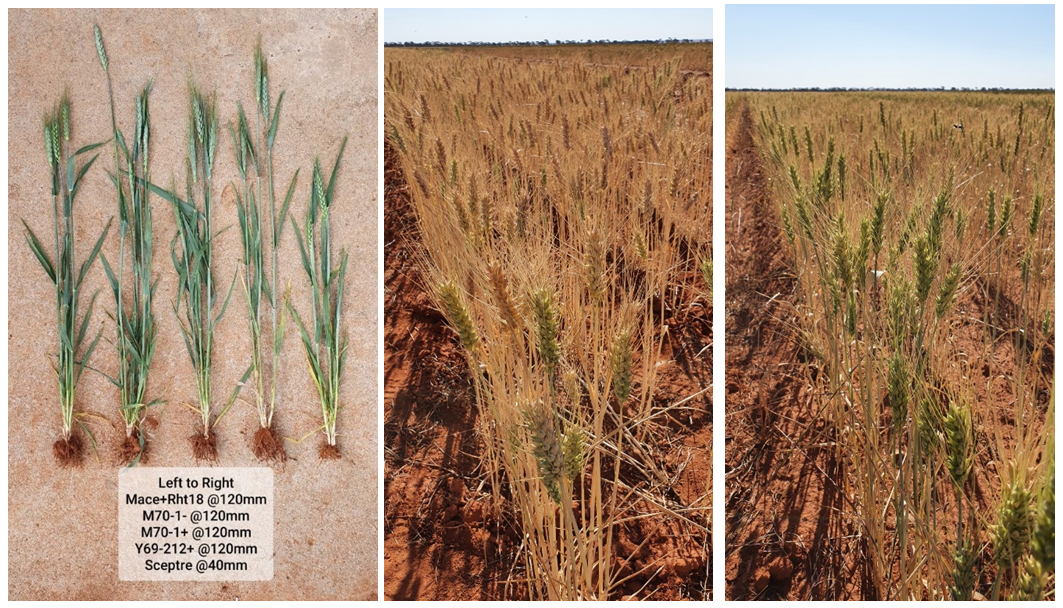 Seed preparation is a key determinant of establishment success when deep sowing or sowing into soils prone to crusting. Figure 5 summarises the effect of seed size on coleoptile length and cross-sectional area (CSA) for four seed size classes. Increasing seed size is associated with greater coleoptile length and CSA with the largest seed (c. 45mg) producing approximately 10 and 25% longer and thicker coleoptiles than the smallest seed (c. 25mg). Furthermore, pinched or shrivelled seed also have reduced coleoptile lengths and CSA (Figure 6) to reduce potential for emergence when deep sowing. The importance of high-quality planting seed cannot be overemphasised when targeting optimal establishment with deep sowing.

Figure 5. Relationship of Increasing seed size (weight) and changes in (a) coleoptile length and (b) coleoptile cross-sectional area.

Figure 6. Influence of seed plumpness on (a) coleoptile length and (b) coleoptile cross-sectional area. Both pinched and plump seed groups were an average seed size of 44mg

Genes that increase coleoptile length have also been identified and tagged with molecular markers to facilitate their use in breeding programs. These genes are expected to play an important role in improving emergence from depth. Matching new genetics with appropriate agronomy and technologies such as moisture seeking, will help improve the emergence and establishment of deep-sown wheats, particularly when sown early in warmer soil conditions or when sown deep when chasing soil water when the top 100+mm of soil has dried out.  The net impact will be to widen the effective sowing window available to growers to sow and establish crops when sowing into soil moisture. This enables growers to better target specific optimal flowering windows for varieties to optimise competing yield and frost risk outcomes. The most likely useful new dwarfing genes, Rht13 and Rht18, have been bred into a range of current commercial wheats. Long coleoptile wheat breeding lines in Mace, LRPB Scout, Espada, EGA Gregory and Magenta genetic backgrounds have been delivered to Australian breeders for testing and use in breeding.

Cleaning and sizing into larger, plump seed will also assist in improving emergence when sowing deep or where there is potential for soil-crusting to impede seedling emergence.