Water stress and extreme heat during flowering can potentially limit sorghum yields across the Northern Grains Region. Traditional sowing windows can expose crops to temperatures in excess of 35oC during the sensitive flowering and grain fill period, resulting in high levels of plant stress, reduced yields, poorer quality grain and in some scenario’s, lodging of the crop.

Manipulating sowing dates to avoid these higher stress periods during flowering and grain fill is a logical response. However, there is a long-held belief that crops won’t establish in soil temperatures <16oC limiting farmers options to sow earlier to minimise the likelihood of heat and terminal stresses, and their consequences on yield, lodging and screenings.

Despite the significant differences between in soil and air temperatures experienced during winter in Central Queensland (CQ) relative to Southern Queensland (SQ) and particularly Northern New South Wales (NNSW), the industry benchmark soil temperature for planting sorghum still limits spring planting dates in CQ to typically a mid to late August planting date. For this reason, spring planted sorghum in CQ is exceptionally rare, and for good reason. July/August/September are traditionally the driest months of the year and receiving sufficient planting rain is rare. In addition, temperatures can spike quickly from late August onwards with the chance of experiencing daily temperature maximums of 35oC increasing to 1 in 3 years by the end of October/early November (Figure 1), which is when an August planted sorghum crop would typically be trying to fill grain in CQ conditions.

Growers in CQ typically plant later in the traditional Dec-Feb planting window for CQ, to avoid extreme heat stress at flowering.  However if sowing too late in that window, flowering plants could be exposed to minimum daily temperatures below 10-12oC, increasing the chance of ergot infecting the florets during flowering, particularly in moist or humid conditions (Pažoutová and Frederickson, 2005). An absolute worst case by pushing the flowering date back into late February or March is the grain filling crop getting ‘frosted’ by a cold blast in late May/June.

Based purely on the air temperature stress risk thresholds; 35oC maximum and 12oC minimum, flowering and grain fill should be taking place in CQ from early April to mid-May for main season crops. For early sown sorghum, a window does exist from mid-September to mid-October (Figure 1) however even the quickest of hybrids in ideal conditions will not be able to hit that window in sub 45 days from planting if sown in mid-August. Figure 1. CliMate analysis of periods during the year, based on Emerald Airport Data, which would experience conditions where temperatures would not exceed 35oC or drop below 10oC in 9 out of 10 years.

This project seeks to identify combinations of management (M) and genetics (G) to target optimum flowering windows to minimise the impact of these stresses on grain yield and yield stability. This requires sowing sorghum in winter or early spring, into cooler soils (>12ºC at sowing depth instead of the commonly recommended >16ºC) and managing the canopy size by matching hybrid and population to site and expected seasonal conditions (Rodriguez et al., 2018).

While project ‘UOQ 1808-001RTX’ has several objectives, a primary driver was to test how low (soil temperature) can we go without compromising establishment and how long would establishment take under conditions 4 to 6oC below the recommended “16oC and rising” industry threshold (measured at 10cm depth at 8am). Leading on from this was then how long would it take to achieve 50% flowering, and could we hit those ‘lower heat stress windows’ in Figure 1, simply by planting earlier?

Establishment does generally improve as soil temperatures increase.  The speed of emergence at the August sowing dates was  within 10 to 15 days after sowing, where colder June or July sowing dates took up to 20 days plus to reach the same establishment levels. Equally in January 2019, time of sowing (TOS) 3 for the first trial was sown into exceptionally hot and dry conditions. As Figure 2 shows, the average soil temperature at 8am was almost 30oC at seed depth, pushing up toward 40 as a peak during the day, thanks to the bare grey cracking vertosol.

In the 2019/20 trial, establishment was reduced to 65% and 64% for TOS 2 and 3, even though the 10-day average soil temperatures post planting were well above the 12oC ten-day average and plant available water (PAW) at planting was acceptable. This was explained by the fact that TOS 1 seed was from a different seed lot to that of TOS 2 and 3 and while initial seed germination tests were acceptable, the results indicate that vigour was poorer in the seed used at TOS 2 and 3, when compared with that of TOS 1. This has been an important learning from the winter sorghum program, and perhaps the biggest challenge to seed producers.

The environment from head emergence, through to grain fill can have a significant effect on yield, grain size, test weight and screenings. Based on Figure 1, which relies on historical data, our ideal window (sub 35oC to reduce stress) falls between mid-September and the first week of October for the CQ ‘winter sown’ trials, while the ‘main’ season window falls between early April to the second week in May.

Table 1 shows the spread of planting dates used for the CQ trials over the past 3 years. Any flowering dates highlighted in green managed to flower within the target window, based on the CliMate data, while those in black all fell outside the target window.

Table 1. Average days to 50% flowering for all Emerald trials over the past 3 years. Flowering dates coloured green flowered within the CliMate predicted optimum period.

However, widows are only guides, and as Figure 3 shows below, conditions from year to year can vary greatly. The blue bars show average maximum air temperature (oC) 10 days post 50% flowering, while the orange bars show average relative humidity (%) over that same period. The green line with markers shows evapotranspiration (ETo) in mm/day over the 10-day period post 50% flowering.

The data collated to date, from not only the CQ trial, but all locations across SQ and NNSW are promising. The project has clearly displayed that a range of commercial hybrids can successfully germinate and establish at levels of 70% or higher of target population in average soil temps as low as 12oC.

While not an ideal scenario, with establishment extending in some conditions to 20 days plus, this expansion of the soil temperature window, potentially opens a new planting window for CQ regions and also improves options for SQ and NNSW. Further to this we have seen seedlings withstand frosts both in CQ and the southern sites as advanced as 6 leaf (Figure 4). 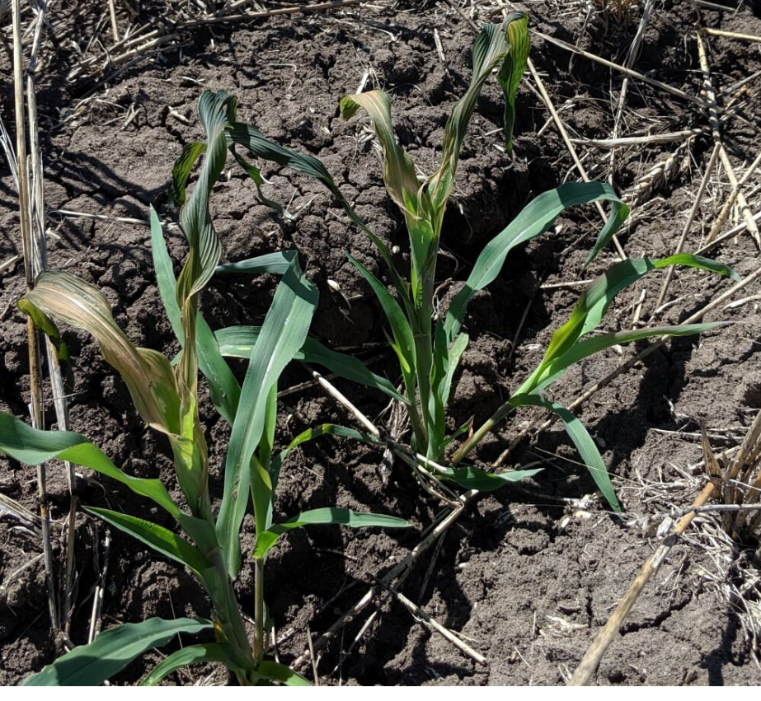 Figure 4. “Frosted” TOS 1 plants on the 13 of August 2019 in Emerald.  No plants were lost due to these events.  Typically if the primary stem were lost, additional tillers would take its place.

Once established, the winter sown sorghum, if planted into good moisture, seems more resilient to dry conditions prior to head emergence, when compared to a main season planted crop. Figure 5. June 2020 planted Cracka sorghum in a low population plot on the 18th September with 8 tillers. Higher than average tiller counts in populations as high as 90000 plants/ha are often observed.

It is still preferable to receive in crop rainfall, preferably at or around the flowering/head emergence period, as supported by the 2019 data set. Both the 2020 and 2018 trials received storm rain of more than 50 mm over a week close to or at grain fill, which significantly assisted during the grain fill period. The 2019 crop did not receive any significant rainfall, particularly around flowering and grain fill (Figure 6), as such the 2019 dryland trials struggled to achieve a yield of more than 1 t/ha, where the 2018 trial yielded more than 4 t/ha.

Figure 7, based on data from the 2018 trials across QLD and NNSW, shows a relationship between post flowering temperatures and grain yield. There was a significant interaction effect between post-flowering maximum temperature and plant population, but not between post-flowering maximum temperature and hybrid. Based on the 2018 data set, the model predicts that yields will be maximised at temperatures below 33oC, but also with a higher established population. It must be noted that this prediction does not account for other environmental effects, including limited water.

Figure 6. Daily air temperature range and rainfall over the duration of the project to date. Graph shows daily minimum (blue), maximum (orange) temperatures and daily rainfalls (green bars). The red dotted line indicates where heat stress will be experienced, the purple line indicates when the chance of ergot may increase. The yellow bars represent the 3 flowering periods for 2018, 2019 and 2020 trials. To date, the Winter Sorghum project has been systematically kicking goals across a range of environments in the Northern Grains region. The project now has three years of data supporting the resilience and tolerance of germinating sorghum to what were considered unthinkable starting soil temperatures for the crop. And while 12oC would not be a suggested sowing temperature, we now know that acceptable establishment can be achieved at these temperatures, should a cold change come through post sowing. We also know the young seedlings are far more tolerant to a frost event, down as low as -2 oC across multiple sites, with minimal mortalities.

The project has also established the Achilles heel of a winter sorghum, that being seed quality, and more importantly, seed vigour. Germination tests alone are not guarantee that vigour will be acceptable, particularly in the coolest of conditions. Sourcing fresh, high vigour seed will present a major challenge to all seed companies if this practice is to become more widespread.

From a CQ point of view, winter sorghum is not a simple decision. While it certainly reduces the chance of heat stress conditions at flowering, relative to an August or early September planted crop.
The significant ETo (evaporation) pressure and heat typically experienced during grain fill, almost demands some kind of rainfall during the flag leaf to grain fill period to maximise yields, even with a full planting profile at sowing

If considering trying winter sown sorghum in CQ, we would suggest the following interim points based on observations to date: