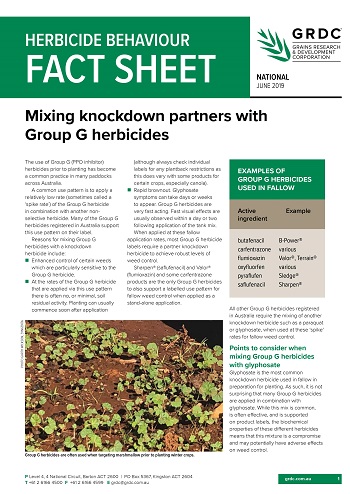 The use of Group G (PPO inhibitor) herbicides has increased in recent years as users are looking to put more diversity into their fallow weed control programs. Most Group G herbicides require the addition of a non-selective knockdown partner when used in fallow or pre-sowing. Most commonly the choice of partner herbicide is a decision between either glyphosate or a paraquat based herbicide.

Glyphosate, a systemic herbicide that takes time to enter and translocate throughout the weed, may not always be the ideal mixing partner for a fast-acting Group G contact herbicide that has limited ability to translocate within the weed. Where glyphosate is to be mixed, it is important to understand compromises that are being taken in terms of herbicide application and the potential impact on weed control. This fact sheet discusses some of the considerations in selecting the choice of tank mix partner for Group G herbicides in fallow.

While glyphosate is often used successfully with Group G herbicides in fallow or prior to planting, there may be some compromises with this mixture.

Areas of more concern arise where:

Further research on interactions between glyphosate and PPO inhibitor herbicides can be found in these international research papers.

Use https://grdc.com.au/herbicide-behaviour-group-g to ensure your link remains current and up-to-date!