The development of autonomous and intelligent technologies provides a mechanism to increase the precision of crop management and realise additional potential from precision agriculture. This means that the right management strategy can be implemented in the right place, at the right time. The introduction of these technologies will also provide opportunities to lever and enhance past developments and improvements in cropping systems and agronomy.

While there is much interest in the development of new automation and robotic technologies, multi-national machinery manufacturers have already developed a number of incubated autonomous, agricultural technologies with near commercial potential.  Australia provides a significant opportunity in the refinement and commercial release of these technologies and is relatively advanced in comparison to North America and Europe in the practical application of precision agriculture technologies.

Autonomous vehicle enabling technologies are relatively advanced in agriculture and informed by both the potential for efficiency gains from more precise operation of tractors and the laborious, systematic nature of machine operation in agriculture. The agricultural operating environment is also conveniently suited to automation with vehicles operating in large, well defined open areas that are relatively free of obstruction and personnel.

A number of technologies have been developed over the last two decades to improve the operational efficiency and productivity of tractors (e.g. guidance, drive-by-wire, continuously variable transmissions). Technologies have also been developed to improve management of crops using precision agriculture (PA) techniques (e.g. precision seeding, variable rate application, yield monitoring). Machine to machine communications are improving logistics and coordination between multiple vehicles and new telematics solutions are now available that provide in-field management of tractor operations and monitoring of vehicle performance. These technologies are routinely used today and there is a range of products commercially available or in active development. While these technologies are being developed as products to augment human operation of the tractor, they form key technological elements of full tractor autonomy (i.e. a pathway to autonomy).

Each of the 6 major tractor manufacturers has made significant developments that inform key components of an autonomous tractor and essentially a technology pathway to autonomy. Currently this technology has been developed to augment human operations which are currently accessible via features or product offerings on tractors commercially sold and available to Australian farmers including the following:

Table 1 provides a summary of these features which indicate each of the 6 major tractor manufacturers has made significant developments that inform key components of an autonomous tractor and essentially a technology pathway to autonomy. Currently this technology has been developed to augment human operations which are currently accessible via features or product offerings on tractors commercially sold and available to Australian farmers.

In addition, the 2 major tractor manufacturers including John Deere and CNH have released operational concept vehicles to gauge consumer interest and the application of this technology in commercial farming operations and environments.  In comparison AGCO the third largest tractor manufacturer has developed a semi-autonomous concept which includes leader (i.e. manned) / follower (unmanned) technology, while Kubota has announced plans to develop autonomous driver technology.

In comparison AGCO, CLAAS and Deutz have developed sensors for both perception and process monitoring as key enablers of autonomous tractor developments which are presented as independent technologies.  It would appear that John Deere and CNH are the most advanced of the large OEMs in terms of having potential to accelerate a product to market. 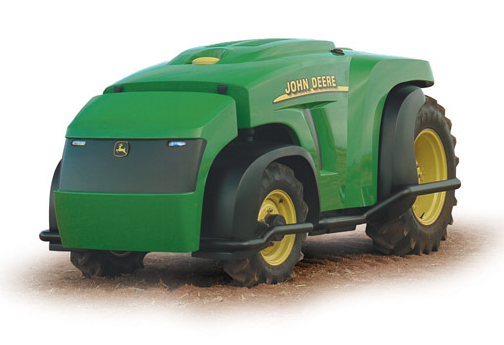 In addition to the major tractor manufacturers there is the emergence of autonomous technology providers such as ASI and Precision Makers that provide 3rd party “bolt on” solutions.  Notably ASI has worked in partnership with John Deere (early autonomous tractor developments) and more recently CNH.  Precision Makers has equipped a Fendt tractor in Australia (Beefwood, Moree NSW) for autonomous commercial operations.  The emergence of these 3rd party technology providers is akin to the initial release of GPS autosteer technology in Australia by Beeline Technologies before the major tractor manufacturers. This provides an additional avenue for Australian producers to access autonomous tractor technology as an aftermarket solution.

Early adopters of aftermarket solutions are potentially exposed to compatibility issues with OEM technology and development cycles in offering a robust retrofit product (presuming this is in isolation to OEMs). The experience with GPS autosteer indicates that third party suppliers of autonomous technology however are more likely to release product before the major tractor manufacturers (in the absence of coordinated industry engagement). This provides an additional option for Australian agricultural industries to access autonomous tractor technology notwithstanding the potential for exposure to developmental risks which would need to be determined.

Apart from the commercial application of existing technologies, key areas of research include interaction of autonomous vehicle with unstructured environments (i.e. terrain); sensing for navigational control and environmental awareness and path planning to optimise machinery operations.  Other key areas include machine intelligence for oversight of operations and perception relating to machine / environmental / human interaction. A revision of registered intellectual property relating to autonomous tractor developments identifies machine to machine communications and sensing and perception as a primary focus.  This is suggestive of future developments in the commercialisation pipeline.

Tractor companies are relatively advanced in terms of the development of technologies which inform autonomous tractor concepts.  Of the 6 major tractor manufacturing companies John Deere and CNH appear to be the most advanced. Other tractor manufacturers including AGCO, CLAAS, Same Deutz-Fahr and Kubota have developed technologies which also inform various components of autonomous tractor functionality such as guidance, perception, machine optimisation and sensors for process monitoring.

In addition to the large tractor manufacturers is the emergence of technology companies providing aftermarket solutions. Similar to the advent of GPS auto steer, these companies provide an independent opportunity for farming enterprises to engage in autonomous tractor technology. The compatibility and field readiness of these technologies requires further investigation although it is noted that there are some examples of deployment under commercial operating conditions.

Emerging / disruptive technologies also feature as a potential opportunity for autonomous technologies on farm and a number of companies have developed platforms that are pre commercial or in the early stages of commercial release.  In comparison to the large tractor manufacturers the accelerated roll out of these technologies will be tempered by early adopter interest in new technology and farming systems concepts as well as the establishment of dealer network and support services.

The research undertaken as part of this project is made possible by the significant contribution of growers through the support of GRDC.  The authors would like to thank them for their continued support.  This paper is an extract from the final report for project USQ00022 – Future FARM Theme 3 Intelligent Infrastructure Phase 1 Review.