Improving productivity and sustainability of northern farming systems: what have we learnt so far from the Pampas systems experiment?

1CSIRO, Toowoomba and 2Department of Agriculture and Fisheries, Toowoomba

Background to the research

The northern farming systems initiative is implementing a co-ordinated experimental program to examine a range of modifications to farming systems and quantify their relative impact on a range of measures of system performance. The combined experimental program consists of 6 regional sites located from central Queensland to central west NSW and includes a core site located at Pampas on the Eastern Darling Downs. While the regional sites are comparing a set of 5 to 8 system modifications to the local baseline farming system, the core site has a wider diversity of cropping systems to capture the broad range of crop systems employed across the northern region, and also examines interactions between these different farming system choices. The core site is comparing 34 different system treatments, which vary in their crop intensity (i.e. the number of crops sown per year), use of break crops and/or legumes, and nutrient supply strategy. Each of these systems are based on differences in key decision points or rules which aim to bring about these distinct changes in the farming systems (e.g. how much soil water is required to sow the crop? which crop should be grown? how much nutrients to supply?).

The site is located at ‘Anchorfield’ 10 km north of Pampas on the Condamine flood plain of the Eastern Darling Downs. The site has a grey vertosol soil with a Plant Available Water Capacity (PAWC) of 250 mm. The site has been cropped for > 50 years and has been under no-till management for > 20 years. The site has no major soil constraints and has high levels of soil P and organic carbon compared to many regions. However, the site had high populations of root lesion nematode populations (Pratylenchus thorneii) at the start of the experiment (> 6000/kg soil) and has a range of weeds common to no-till systems (fleabane, sowthistle, feather top Rhodes).

Some clear differences can be observed in crop grain yields achieved under the different crop sequences and systems. The first was the 0.5-0.7 t/ha higher yield achieved by Gauntlet wheat sown earlier (13 May) compared to the district practice (2 June) in the first winter of 2015.

The second is the effect of the proceeding crop on the yield of the mungbean double crop in summer 15/16. Table 1 shows the break crop effect that canola has had on mungbeans compared to wheat or faba bean. The grain yield benefit of 0.3 -0.4 t/ha in this dry growing season was mostly likely attributable to the lower population of root lesion nematodes (P. thornei) which may have also reduced the impact of Fusarium wilt. The other observation here was the difficulty in controlling volunteer field peas in the mungbean double crop, which contributed to the lowering mungbean yield.

A grain sorghum crop was sown in October 2016 following a range of previous crop sequences involving various winter crops which were followed by either a long-fallow or a double crop of mungbeans. One system also had an oat cover crop (May to July) following chickpea. We observed no significant difference in sorghum grain yield between winter crops followed by the long-fallow. There was no evidence of long-fallow disorder following the non-mycorrhizal canola which was also then followed by a long-fallow before the subsequent sorghum crop. Potential benefits of additional nitrogen (N) provided after legumes were only small and hence not significant; there was also no response to any additional fertiliser N in this season.

On the other hand, sorghum yields were reduced by >0.7 t/ha when they followed the mungbean double-crop or oat cover crop instead of maintaining a fallow. Larger yield penalties were observed in sorghum following faba bean - mungbean which was attributed to higher levels of Spinnaker® (imazethapyr) herbicide residues in this system which reduced sorghum plant densities by 50%. Interestingly here lower yields following canola – mungbean also occurred, which are difficult to explain. However, this reduction was not observed under in high nutrient supply systems, where initial manure applications and higher rates of starter and urea applied at sowing in the sorghum crop.

B there was a difference in sorghum yield in this systems when high nutrient inputs were provided.

The experimental site has moderate levels of root lesion nematodes (RLN) and hence varieties have been used are thought to be the most tolerant and/or resistant cultivars of that crop. Some clear differences in the dynamics of nematode populations have been observed across the range of crop sequences that have been grown so far.

While we have grown the most tolerant and resistant wheat cultivar, Gauntlet, we have still seen an increase in RLN populations of between 6 to 10 nematodes/g soil (2 to 2.5 times higher) in both experimental seasons (Figure 1 and 2). This has always been higher than the increase we have seen in grain legumes, Warda faba bean and HatTrick chickpea. We used Percy field pea as a grain legume thought to be resistant to RLN, but in our first year it increased RLN populations similarly to the other grain legumes (Figure 1).

Where we followed the various winter crops with a Jade mungbean double crop we saw a significant further magnification in RLN populations. This increase was far greater when the mungbean double crop followed susceptible crops of wheat or faba bean (11-14/g) compared to when it followed canola (5/g) (Figure 1). This demonstrates that extending the period of host crops in the system, by double-cropping with two susceptible crops in a row can further propagate the RLN population and bring about dramatic increases in their numbers. RLN populations then declined during the subsequent fallow after the mungbeans, but they remain higher than in the systems that remained fallow after the first winter crop.

Various systems in the experiment are testing the use of greater crop diversity, particularly using RLN resistant crops. Systems where canola and durum wheat have been used have seen RLN populations decline, albeit slowly. This has been similar to maintaining a fallow over the same period. 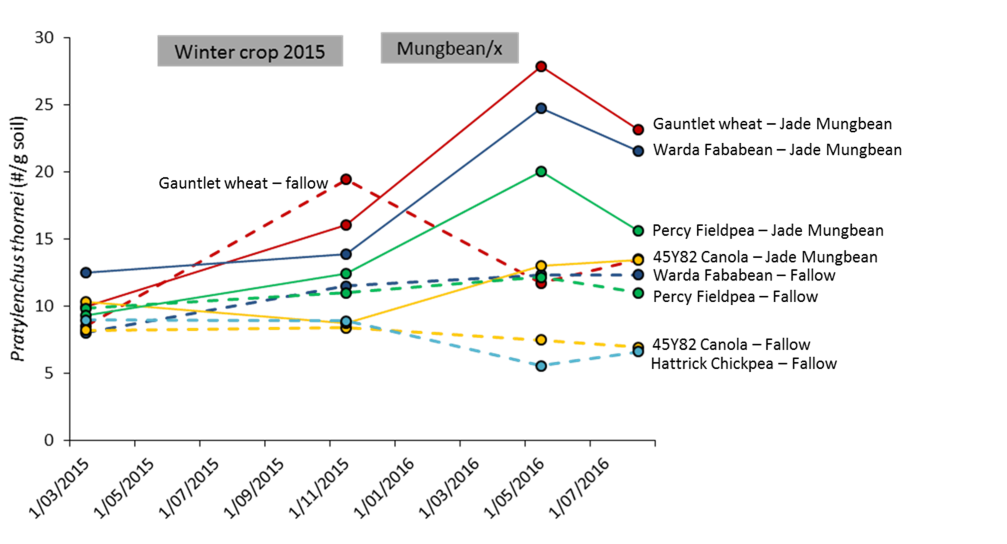 Figure 1. Changesin root lesion nematode population between different winter crops followed by either a long-fallow or a double-crop of Jade mungbean 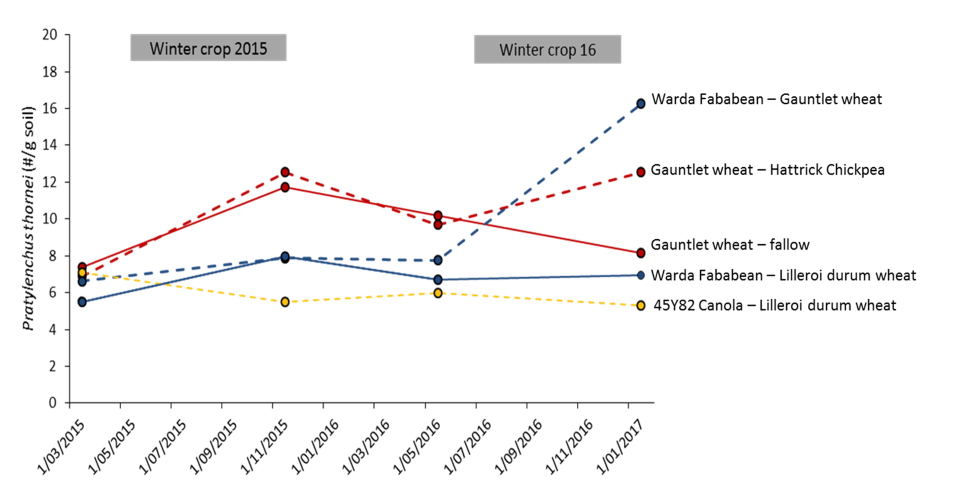 Over the experimental period the site has received 1120 mm of rain from March 2015 to March 2017. Table 3 shows for a diversity of crop sequences relatively small differences in total water use, but the set of crops grown greatly influences the total grain produced. Of course these different crops have different grain prices, so we have estimated here the total returns using long-term average farm gate prices. This reveals a benchmark system WUE of around $2.00 per mm of rainfall.

While it might have been expected that alternative ‘break-crops’ like canola and durum wheat, which were deployed in the system to provide disease management benefits to the cropping system, might have reduced system WUE, we have found that the systems involving these crops have potentially higher WUE so far. In both the opportunity cropping systems (Table 3) and the winter-crop systems (Table 4) the systems involving canola have system WUE of 20% to 40% higher than the baseline. However, it is worth noting that difficulties with efficient canola harvest can bring these system WUE back to a similar level to the benchmark systems. Lower yields of field pea relative to the other pulse crops has reduced the WUE of the systems and so far little additional benefits have been observed to compensate for this lower return.

So far in the experiment we have seen slightly higher WUE in the systems which have employed an additional mungbean double-crop (i.e. 3 crops) over the 2 experimental years compared to those with a long fallow (2 crops). The additional grain yield and returns from the mungbean crop are somewhat offset by the lower yields in the subsequent sorghum crop. On the other hand, the low intensity system, where crops are only grown when the soil profile is > 80% full have only grown a single crop so far: no winter crop was sown due to marginal moisture in winter 2016. At this stage these systems are clearly behind in terms of system WUE, though they have more stored soil water now in May 2017 (40 to 50 mm), which might enable these systems to ‘catch-up’ during this winter cropping season.

It should be noted that here we present only the net income obtained during each of these crop sequences, there may be differences in expenses that may alter the relative differences amongst them. We have also used long-term average prices to avoid annual differences which may favour the profitability of some crops over others. Changes in these relative prices may also shift the relative system $ WUE of the various crop sequences.

Table 3. Calculated system water use (rain + change in soil water), total grain produced and estimated returns and system WUE ($ returned/mm) for opportunity crop sequences between March 2015 and March 2017. Canola harvested yield in 2015 was reduced by 1.3-1.4 t/ha due to low harvest efficiency, results using this lower yield are provided in brackets

Table 4. Calculated system water use (rain + change in soil water), total grain produced and estimated returns and system WUE ($ returned/mm water used) for winter-crop only systems between March 2015 and May 2017

The nutrient balance (net export of nutrient) and the nutrient use efficiency (kg N exported/kg N used) of the various cropping systems are also being monitored. Most systems have exported more grain N than has been accounted for in the system, meaning they have a N use efficiency greater than 1.0, but also a negative N balance. Hence, systems which are more NUE are also those with a large N deficit. Some somewhat surprising results so far include

So far this experiment has demonstrated that alternative crops like canola and durum wheat can have a positive impact on both nematode populations, subsequent grain yields and in terms of system water or nitrogen use efficiency.

The impact of nematodes on reducing the grain yield of mungbeans and propagating their populations demonstrates that double crops of two susceptible crops is high risk and should be avoided where nematode populations are significant. This, and the impact on soil water availability and subsequent crop yields, should be taken into account when assessing double crop options in the farming system.

Increasing crop frequency has increased the capture and use of water by crops but this has not greatly altered the returns from the system in terms of $/mm rain as yet. However, low intensity systems (e.g. < 0.5 crops per year) are less water use efficient and so far have lower returns and profit per ha.

The research undertaken as part of this project is made possible by the significant contributions of growers through both trial cooperation and the support of the GRDC, the author would like to thank them for their continued support. We would also like to thank specifically our co-operators and hosts at ‘Anchorfield’ who assist us implement this experiment in a variety of ways (too many to mention) that are most appreciated. We must also thank Jon Thelander, Seednet for helping source and supply much of the seed used, Paul McIntosh (Pulse Australia and AHRI) for his advice and help with our pest management program, Wes Judd and Craig Antonio who have helped with cut and conditioning hay form pasture treatments and Department of Agriculture and Fisheries farm staff for their help and patience harvesting and planting the crops.