Chickpea agronomy and water use with neutron moisture meters

The Queensland Pulse Agronomy Initiative planted its first chickpea trial in the 2013 winter, and with the next 2 years of trials our understanding of what drives yield improved, but also left many unanswered questions regarding crop physiology and how to best manage the crop to maximise yield.

Figure 2. Time of Sowing (TOS) trials in 2015 at 3 sites; Hermitage [HRS], Kingaroy [KY] and Emerald [EAC].  All sites had a decreasing trend for dry matter production when planted later in the season (a).  Harvest Index (HI) improves with later sowing dates as dry matter is reduced (b).

Combining dry matter and yield data across 10 sites over 3 years which includes trials sites at Emerald, Kingaroy, Warra, Dalby, Goondiwindi and Hermitage in Figure 3, indicates that chickpeas do not convert biomass to grain with the same efficiency as the production of dry matter increases.  There is a very good straight line relationship up to 8t/ha dry matter and it plateaus after this, i.e. the highest yield potential crops do not fully meet their grain production potential.  There could be many reasons for this including terminal droughts as a consequence of growing large biomass crops. 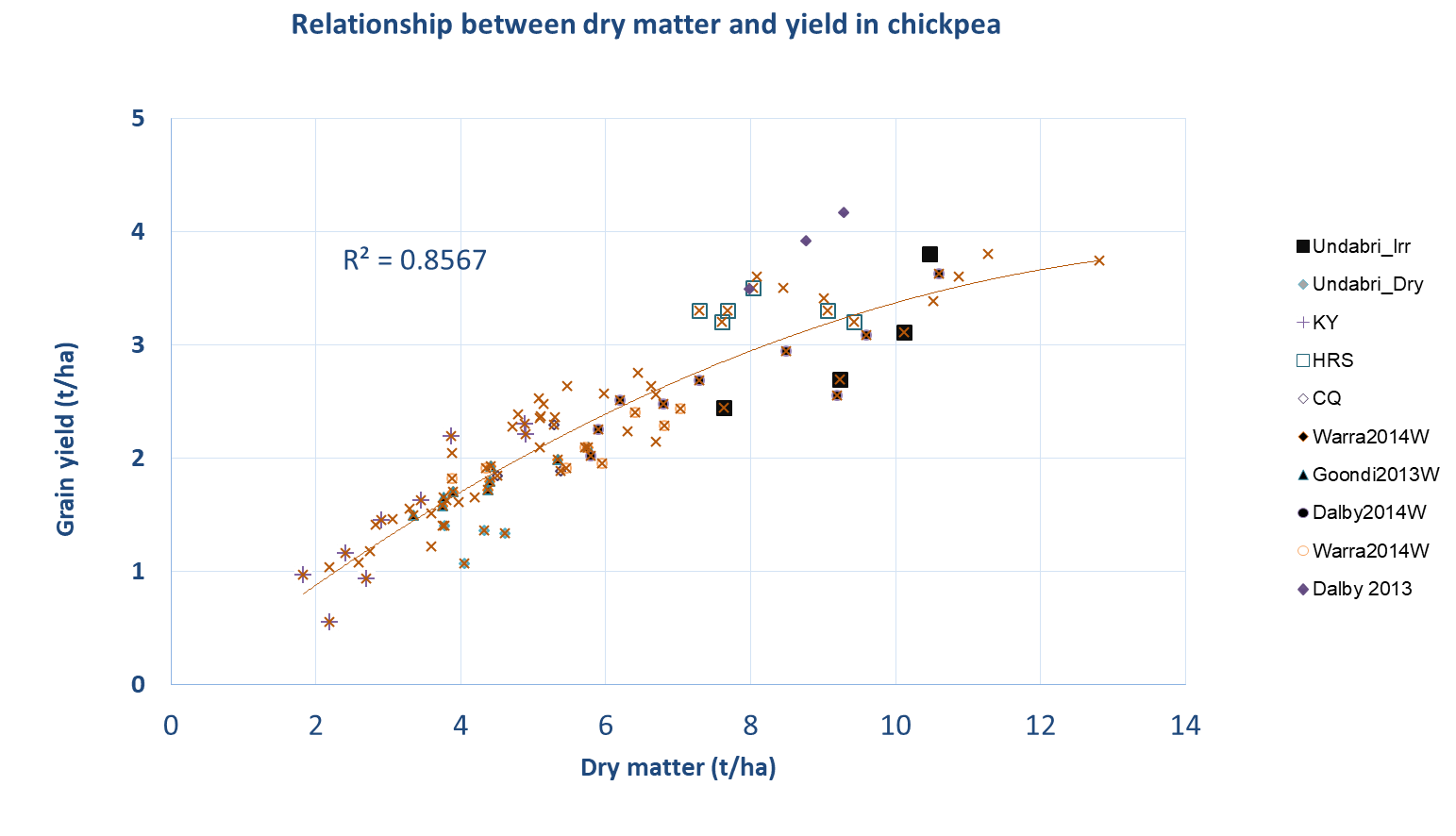 Figure 3. The relationship ship between dry matter production and grain for chickpea trials at 10 sites over 3 years

These findings have directed subsequent research questions in the Queensland Pulse Agronomy Initiative. The questions to be answered include; can harvest index be manipulated in chickpeas? How best to manage high biomass crops? Can early biomass production be reduced to conserve soil moisture for later in the season?

Trials with many plant growth regulators (PGRs) and other chemicals were conducted in 2016.  While there were some products that did have a minimal effect on harvest index (HI), no products improved yields.  Work with PGR’s has many seasonal, rate and timing variabilities that make consistent results difficult to obtain. Due to this and that currently there are no PGR products registered for use on chickpeas, this aspect of the research was not pursued further.

In other trials, the water use of chickpeas was monitored with neutron moisture meters (NMM) to determine when and where the crop was accessing soil water and to explain why narrower row spacings were able to access more water and convert it more efficiently to grain.

To monitor soil moisture and where chickpeas are drawing moisture from using the neutron moisture meter (NMM), plots were planted at 2 different row spacings of 50 and 75 cm. Within the plot 2 access tubes were installed, one in the planted row and the other between the 2 rows.  In 2016 the variety was PBA HatTrick planted at 30 plants/m2.  Access tubes were in all 3 replicated plots and measurements averaged.

This chickpea trial at Hermitage in 2016, had an unusually wet late winter and spring with close to 500 mm of in-crop rain for the main season planting time and 350mm for the later sowing.  This led to a very late January harvest and a badly lodged crop. Grain yield results from this trial had no statistical differences across variety and row spacing, with a trend for higher yields at the later sowing time.

For the earlier sowing time, flowering commenced by mid-September.  The critical 15°C average temperature for pod retention was not consistent until well into October, with below 5°C minimum temperatures recorded on the 25th of October.

Due to the very wet season, NMM data shows that the crop grew from August to mid-October on rainfall, with soil moisture depletion only starting to occur after this time.  This soil draw down coincided with the warmer temperatures and pod retention of the crop. The NMM data shows that even with the high rainfall, soil moisture was removed from the profile to the deepest measuring point of 125 cm (Figure 4). We can only assume the chickpea crop was the cause of this as roots were not assessed. Figure 4. Soil water use as measured by neutron moisture meter at Hermitage Qld. at 3 times during the growing season.  Access tube was in the middle of 2 rows planted 50 cm apart.

A further point of interest was from where water was extracted in the different row spacings of 50 cm and 75 cm.  In the 50 cm, plots water extraction patterns were virtually the same where measured in the planted row or between the row.  In the wider spaced rows at 75 cm, as the season progressed, more water was extracted in the between row space and this occurred in the top 65 cm of the profile. The difference over the season was 30 mm of additional PAWC removed in the inter row space as compared to the on row readings. If you averaged the 2 tubes it would mean an additional 15mm of water extracted in 75cm plot for no additional yield benefit.

In previous trials within the Pulse Agronomy project where starting and ending gravimetric assessments of soil water were taken, the results show that crops planted on narrow row spacing access up to 20mm more of the stored soil water, and due to higher yields convert this moisture more efficiently to grain.

The trial data for chickpeas grown in 2017 which will provide additional NMM data were unavailable at the time of publishing.

Chickpeas have the potential for yields approaching 5 t/ha  given the right environment/season (this project’s best small plot yield 4.7 t/ha dryland).  Dry matter production of above 10t/ha and up to 13 t/ha have been produced, and results have seen harvest index of 0.45, however the crop seems unable to maintain a constant harvest index above 8 t/ha dry matter and it is difficult to get the combination of high dry matter and HI.

The results suggest several management options to give the crop the greatest potential; starting with narrow rows. The farming system also needs to be considered, as well as any associated risk with disease for the coming season.  Improved yields from narrow rows are evidenced in high and low yield scenarios, with disease pressure high 1 in 7 – 10 years.

Planting early produces large biomass that has a higher disease risk potential.  The bigger risk however, is using up stored soil moisture and adding to the possibility of terminal drought and being unable to maintain this yield potential through pod fill.

Chickpeas should be sown into paddocks with good soil depth and minimal soil constraints.  It has long been known that chickpeas are very adept at chasing deep moisture and NMM suggests extraction to 125 cm in a soft year. Choosing paddocks with the biggest bucket is highly adventitious for high yields.

Management options once the crop is growing, apart from the usual crop protection/good agronomy, have been elusive and work will continue to manipulate the crop to improve harvest index particularly for high biomass crops but also for lower biomass situations.

Current farming systems aim to store rainfall and fill the soil profile between crops.  Good management enable the crop to withdraw more from this bank of stored soil water.

The project team is supported by DAF and QAAFI and would like to thank the staff that have contributed to these results: Stephen Krosch, John Lehane, Rod O’Connor, Peter Agius, Kerry Bell, Grant Cutler, Nadia Lambert and the Research Infrastructure team.

A special thanks to the generous farmer co-operators who have hosted field trials.