Over the last thirty years, the number of Australian grain growers using reduced-till technology has increased from around 5% to over 70%. This has dramatically improved soil structure and reduced erosion, but has also necessitated an increase in herbicide use for weed control. Little is known about how increased herbicide use might impact on soil organisms and the beneficial functions they provide. Anecdotal evidence also suggests that plant-back damage in rotational crops due to herbicide residues is a growing concern amongst growers, but the scale and cost to the Australian Grains industry remains unknown. A GRDC-funded project (DAN00180) has been benchmarking the level of herbicide residues in cropping soils and generating new knowledge about the fate, behaviour and risk of herbicides to productivity and soil biological function. The aim is to enable the Australian grains industry to better understand the risks and implement changes in management for more productive and resilient farming systems.

One part of this project has been examining the impacts of residual herbicides applied over a summer fallow on subsequent biological symbiotic associations (rhizobia and mycorrhizal) in winter crops (chickpea and wheat) and biological components (nematode communities, microbial activity) of the soil. Field trials conducted by the Regional Research Agronomy network and the weeds teams within the Sustainable Farming Systems group of Crop and Food Science, Qld DAF, have given an opportunity to viably assess the impact of some residual herbicides on certain crop associated soil biological functions and components. With the increase in glyphosate resistance and difficult to control weeds in the northern region, alternative weed management tactics are required. One such alternative is residual herbicides. Residual herbicides can provide medium to long-term control of weeds in fallow and crop by controlling several flushes of emergence. However the efficacy of residual herbicides can be affected by the environment (soil type, rainfall, temperature). Therefore, it is necessary to gather local efficacy and persistence data across a range of environments and seasons.  Persistence of residual herbicides can have flow-on effects on the biological components of soils either directly or indirectly (through reduced plant and root growth).

Residual herbicide trials were conducted across Queensland over the summers of 2015/16 and 2016/17. Multiple sites operated out of Emerald, Goondiwindi and Toowoomba (15 sites in total) were established to investigate the efficacy of residual herbicides on key summer weeds.  Bioassays using soil samples collected 90 days post-spraying were then conducted to study the impact on soil biota such as mycorrhizal fungi and beneficial nematodes as soil health indicators and on key biological associations such as nodulation with N fixing bacteria.

Each field trial was established at a site/s where there was an expected uniform density of a minimum 30-50 plants/m2 for each flush of emergence (often difficult to predict). This was to ensure there would be enough target weed species to distinguish between treatments either alone or in mixture.

Table 1. Treatments (note not all treatments applied at all sites)

** Please note that Stomp Xtra and Nu-trazine were used as a treatment in this trial and are no longer registered products, however other products are available containing the same active ingredients are registered. Always refer to label for rates.

# Products not registered in fallow.

A minimum of 5 kg of soil to a depth of 10cm from each plot was collected 90 days post application. Soil from each treatment at each site was potted into 3 x 1.5 L pots and planted to either uninoculated chickpea or inoculated (with rhizobia, strain CC1192) chickpea or to wheat.  Soil was also collected for a nematode community analysis at time of sampling and for soil physical characteristics.  Whilst an analysis of the level of herbicide residue at this time would also be of interest, it was cost prohibitive to do all samples and so specific plots/treatments only will be analysed.

Plants were grown for 8 weeks, at which time top and root growth was assessed and nodulation due to rhizobia was scored for each of the chickpea treatments.   Wheat roots were subsampled for mycorrhizal colonisation assessments.

Whilst analyses are still underway, preliminary results are indicating that residual effects of imazapic (Trt 2) and the combination of imazapic and isoxaflutole(Trt 7), of diuron (Trt 12) and of picloram, 2,4-D and aminopyralid (applied as Fallow Boss Tordon) (Trt 14) have all had negative impacts on nodulation and in some cases growth of the plant.  Figures 1 and 2 are examples of the impacts on nodulation and plant growth respectively at one site (Denver) in southern Qld.  These effects are not surprising, as these active ingredients are all listed as being slowly degraded by microbes with average half-lives of 89 (diuron) to 232 (imazapic) days (Congreve and Cameron 2014). Furthermore plant back periods for chickpea as specified on some key product labels are 4 months for imazapic and 6 months for FallowBoss Tordon (picloram, 2,4-D and aminopyralid).  Soil organic matter and the amount and frequency of rainfall will greatly influence degradation times as breakdown is primarily via microbial degradation processes.  Temperature will also have an influence, as can incorporation by rainfall or tillage.  In the case of imazapic, soil pH will also have an influence, soil half-life values being somewhat longer in lower pH soils.  We sampled at 90 days post application, so given the dry season over the summer, several of these slower to degrade herbicides are obviously still persisting with the potential to exhibit negative impacts on plant growth and nodulation of the sensitive species chickpea. 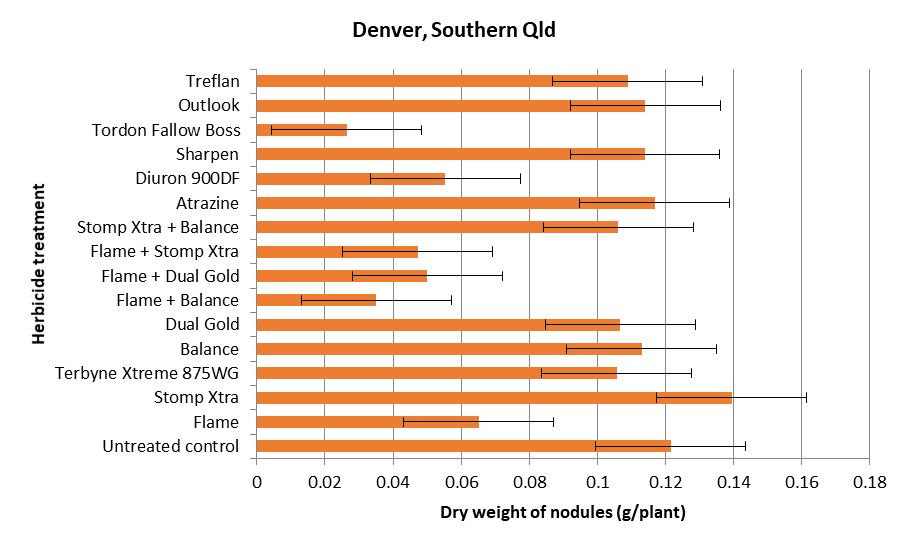 Figure 1. The dry weight of nodules on 8 week-old chickpea plants grown in pots of a vertosol that was collected from a paddock in southern Qld 90 days post application of various residual herbicides. 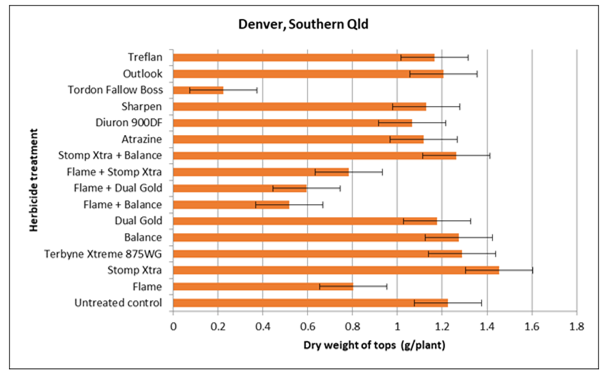 Figure 2. The dry weight of shoots of 8 week-old chickpea plants grown in pots of a vertosol that was collected from a paddock in southern Qld 90 days post application of various residual herbicides

Growers should carefully adhere to recommended plant back periods for sensitive crops and be especially careful if the seasonal weather conditions have not been conducive to complete herbicide breakdown.  Not only will growth of the crops be reduced but damage due to the presence of residual herbicide in the soil may also lead to reduced nodulation and hence reduced nitrogen fixation in a following chickpea crop leading to potential N deficiency in the pulse and of the following cereal crop.  Severe root and shoot damage leading to poor crop performance has the potential to reduce mycorrhizal colonisation in following crops.

The research undertaken as part of this project is made possible by the significant contributions of growers through both trial cooperation and the support of the GRDC, the authors would like to thank them for their continued support. Many thanks especially to the DAF Regional Research Agronomy Network team especially Andrew Erbacher, Darren Aisthorpe and Duncan Weir for conducting the trials along with Michael Widderick and his weeds research team.