Chickpea is rapidly growing in its importance as a winter legume crop in Australia. Research and pre-breeding in Australia is expanding in the areas of abiotic stress tolerance to build on gains in disease control over the past 40 years.

Terminal heat stress is one of the most widespread abiotic stressors in Australian cropping regions. There are several ways in which heat can reduce yield, which include death/sterility of reproductive tissues (Devasirvatham et al. 2013), reduced pod set, a reduction in the duration of developmental stages (Devasirvatham et al. 2012) and investment in heat-shock proteins (Jha et al. 2014). These factors are controlled by different genes and require different breeding strategies, but relevant traits could potentially be ‘pyramided’ into new pre-breeding lines to enhance the performance of chickpea in hot and dry seasons.

Compared to most other winter legumes, chickpea has a reputation as relatively tolerant to hot, dry conditions (Sadras et al. 2015). The temperatures required to sterilise flowers are relatively high (sustained >33oC daytime temperatures in sensitive genotypes – Devasirvatham et al. 2013) and are not usually persistent during the key weeks of pollination in September and October in the Australian grain belt. Conversely, temperatures which delay the onset of podding (average daily temperature of 15oC, termed “chilling temperatures” – Croser et al. 2003) are quite common, and delays in the commencement of podding of up to 35 days post flowering have been recorded in Mediteranean-type climates in Australia due to long periods of chilling temperatures (Berger et al 2004). Reduced pod set has been observed in mean temperatures up to 21oC (Berger et al. 2011). This has been attributed to a reduced ability of the pollen to grow through the style and fertilise the ovule under low temperatures, despite both pollen and ovule being fertile (Srinivasan et al. 1999; Clarke and Siddique 2004).

It has been argued that greater yield gains for Australian growers are possible by bringing the podding period earlier by a week in September (heat avoidance) rather than extending the podding period a week into November (heat tolerance), when moisture availability is usually also a significant constraint (Clarke et al. 2004). Several approaches to breeding for improved chilling tolerance have been attempted in Australia, including pollen screening utilising internationally-sourced Cicer arientinum germplasm, which resulted in early-podding cultivars Sonali and Rupali (Clarke et al. 2004), and screening wild relatives for chilling tolerance (Berger et al. 2011). It has been suggested that little genetic variation exists amongst domesticated chickpea to breed for chilling tolerance (Berger et al. 2011), however a difference of a few days in the onset of podding, though scientifically small when compared to wild Cicer species or other crops, can be economically large to a grower, particularly in seasons of terminal heat or drought stress (Berger et al. 2004).

The aim of this research is to investigate mechanisms for heat tolerance and avoidance, screen Australian and international germplasm for genetic sources of relevant traits, and incorporate these traits into pre-breeding lines which can be used for development of future Australian cultivars by breeders. The data presented in this paper are preliminary phenological results from a subset of lines to illustrate the potential to breed for chilling tolerance as a mechanism to increase the time available for podding in seasons/environments which experience terminal heat and drought stress.

A field experiment was conducted at the I. A. Watson Grains Research Institute, Narrabri (30.34oS; 149.76oE) in 2016 and 2017. Up to 76 chickpea genotypes were planted in two replicated plots (each plot 1.8 x 4 m). Data presented here is from a subset of lines representing released cultivars or publically available genotypes.

The experiment consisted of two sowing dates - a sowing date typical for the northern region and a later sowing when plants would be exposed to higher temperatures. Planting dates were 14 June and 29 July in 2016, and 31 May and 25 July in 2017. The experimental years provided two contrasting seasons: 2016 was dominated by high rainfall (529 mm Jun – Oct) and relatively cool September daytime temperatures, with large amounts of cloud associated with precipitation in the first few months of growth. In contrast, 2017 started with good stored moisture, but had less in-crop rainfall (135 mm Jun-Nov), with concurrent warmer days and cooler nights. Temperature profiles for the period before and during the reproductive phase are given in Figure 1.

Plots damaged by severe ascochyta infection in 2016 were excluded from the analysis and hence, the results for some cultivars represent data from single plots.

Phenology for the time of sowing (TOS) trial was recorded as the days after planting (DAP) that 50% of plants in the plot had produced its first flower or first pod. Growing degree days (GDD) was calculated by

Where Tmax is the daily max temperature and TMin is the daily minimum, unless the minimum dropped below Tbase in which case Tbase was used. A Tbase of 0oC was assumed (Soltani et al. 2006). Daily temperatures were measured by an on-site weather station. In addition, over 1000 genetically-diverse chickpea genotypes were obtained from the Australian Grains Genebank (AGG), plus a subset of 241 lines from the ICRISAT reference set were obtained via the Australian Centre for Plant Functional Genomics (Adelaide, South Australia). These sets included wild relatives of domesticated chickpea, wild-collected accessions of Cicer arientinum, and breeding lines/cultivars from a diverse range of growing environments around the world. All genotypes were sown in single 1.5m rows in 2016 in a netted bird-exclusion cage at Narrabri between the 18th and 27th July, with the late and long sowing period being due to high rainfall, which continued for most of the growing season. PBA HatTrick and PBA Slasher were included as comparators. Phenology was determined for plants within each 1.5m row as per TOS trial.

The data were analysed using the REML function I Genstat (version 17). Years, sowing dates and genotypes were considered fixed effects and row-column coordinates within sowing dates and seasons as random effects.

The contrasting seasons provided interesting study years for the influence of temperature on phenology. DAP for flowering, podding and the flower-pod interval exhibited a significant interaction between genotype, year and TOS (P=0.036, P<0.001 and P<0.001 respectively). The range in flowering dates between genotypes for TOS1 was greater than the range in podding dates (Table 1). However, the range in flowering and podding dates within TOS2 were similar (approximately 12 days), but much narrower than TOS1. This suggests that either the warmer temperatures in TOS2 induced earlier pod set, or that cooler temperatures in TOS1 delayed pod set.

This data shows clear relationship between flowering and podding date, with 58-63% of the variance in podding date being explained by flowering date in regular sowings. Hence, selecting for earlier flowering will result in earlier podding. However, based on this data and considering only this set of genotypes, selecting for 1 day earlier podding will only bring forward podding by 0.31 days. Hence the economic value of selecting for earlier flowering/podding amongst this set of germplasm is quite low, considering that the range in flowering dates from which to select is only a couple of weeks.

Cultivars which had a flower-pod interval which was more than 2 weeks greater in TOS1 compared with TOS2 were Genesis 079, PBA Monarch, PBA Pistol, PBA Slasher, PBA Striker and Sonali. These cultivars tended to have both earlier flowering and earlier podding times than other cultivars, and were the earliest in both TOS1 and TOS2. 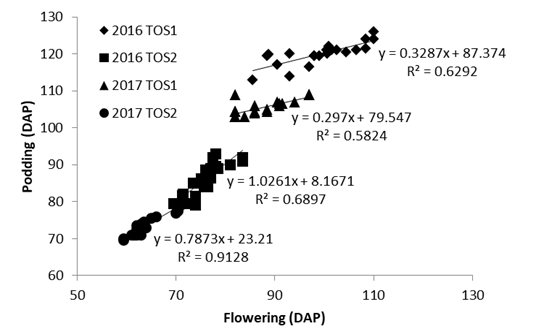 Figure 2. Correlations between the flowering and podding dates of genotypes in
two contrasting seasons

The thermal time requirements to the commencement of the flowering and podding periods are given in Table 2. Earlier commencement of podding in 2017 cannot be explained by faster accumulation in thermal time. Commencement of podding in TOS1 was 207 GDD later in 2016 than 2017. This trend was also evident in TOS2, albeit to a lesser extent. Whilst the average daily temperatures (essentially what is used to calculate GDD where Tbase = 0oC) in both seasons were similar during the commencement and early reproductive stage (Figure 1), the daily maximums and minimums were quite different, and the amount of cloud was much higher in 2016 due to the large number of rainy days. It is possible that lower light intensity due to cloud cover had a significant influence on chickpea development. Note that irrigation was used to top up stored soil moisture in 2017 such that there was minimal to zero water stress during flowering and podding (no irrigation was required in 2016).

The shorter intervals between flowering and podding in TOS2 compared to TOS1 are also not explained by differences in GDD alone, with podding commencing 330 GDD earlier in TOS2 than TOS1 in 2016 and 246 GDD earlier in 2017. This lends support to the importance of considering daylength as well as temperature in delayed sowing trials (Sadras et al. 2015).

Table 1. Number of days between flowering and podding in heat stress trials at
Narrabri in 2016 and 2017

Podding for all genotypes in TOS2 began between 80 and 92 DAP in 2016 and 71 and 76 DAP in 2017. The mean flower-pod interval was 10 days in both 2016 and 2017 for this treatment, which was between 9 and 14 days shorter than TOS1. Given that it is not GDD alone which causes shorter flower-pod intervals in TOS2, two possible factors are proposed: longer daylength/greater incidence of solar radiation (Soltani and Sinclair, 2011), and/or a critical minimum temperature under which sporogenesis or pollenation cannot occur (Clarke and Siddique 2004). The large number of cloudy days in 2016 likely played a role in alteration of phenology.

Further field trials over the next few years will quantify the influence of these various factors, as well as growth rate, changes in canopy temperature using aerial remote sensing, model phenology relative to canopy temperature rather than weather station data, and quantify photothermal time rather than simply GDD. Another factor that warrants further research is that average daily temperature is not the best measure of chilling but rather temperatures after dawn (when pollen is released).

Table 2. Accumulated GDD up to the commencement of flowering and podding for the
earliest genotypes in each treatment

Of most value to prebreeding is that differences existed between genotypes, even amongst the fairly narrow genetic diversity found in current Australian cultivars. To expand this genetic range and seek lines with earlier podding capacity (and suitability to other climatic features of the Northern Grain Belt), the phenology and yield potential of a diverse range of chickpea genotypes were quantified at Narrabri (Figure 3). Heavy rains in June and July caused significant planting delays, such that the planting date was closer to TOS2 in 2016 and thus the discrimination between podding dates was anticipated to be small. Nevertheless, up to 6 days difference in podding date between PBA HatTrick and the earliest podding lines, and 7 days difference in the flower-pod interval, were observed. Podding dates of PBA Slasher and PBA HatTrick standards were 91 DAP and 85 DAP respectively, and flower-pod intervals were 15 days and 12 days respectively. This placed these lines (and by deduction most Australian cultivars) well within, but slightly earlier than average, the range of podding dates found in the diverse lines. It is anticipated that when sown within the optimum sowing window for chickpea there would be greater variation in podding dates and flower-pod interval, as experienced in the TOS1 trials. 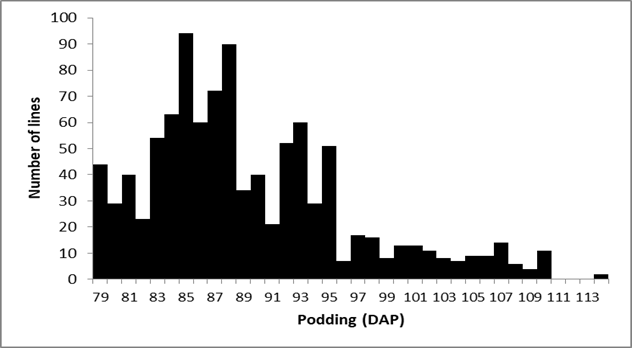 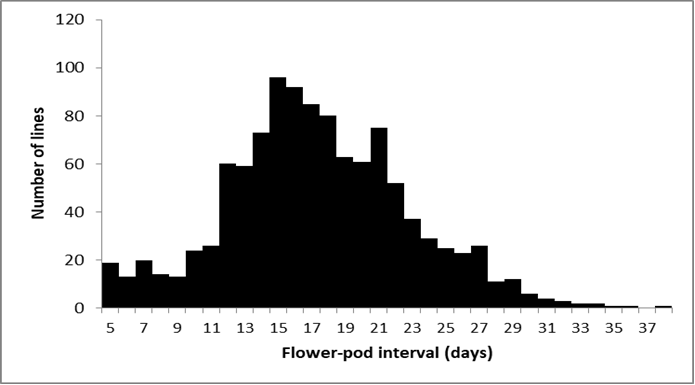 Figure 3. Histograms showing distribution of podding and flower-pod intervals amongst a range of >1000 diverse genotypes including closely related Cicer species and wild lines.

A subset of approximately 200 of the diverse lines from 2016 were increased in 2017 and will undergo field-based screening in 2018. Selection amongst diverse genotypes will be made for earlier podset as well as a host of other traits likely to lead to yield gains in the northern grain belt. The most promising lines will be crossed with high-yielding Australian cultivars and sent to the PBA chickpea breeding program at Tamworth for incorporation into future chickpea cultivars.

This research is part of theme 1A of the Legumes for Sustainable Agriculture, which is funded through Australian Research Council Industrial Transformation Hub (IH140100013) and growers via the GRDC, and the authors would like to thank them for their continued support. The authors also thank Tim Sutton of ACPFG for provision of the ICRISAT reference set.