Prior to harvest in October and November 2016 Charles Sturt University and Queensland DAF conducted the first random survey to determine the level of herbicide resistance across the northern cropping region of NSW and Qld. During the survey, whenever present, samples were collected of a number of weed species including ryegrass, wild oats, barley grass, brome grass, wild radish, Indian hedge mustard African turnip weed, wild turnip and wild radish. Other weed species were collected when present in significant numbers. This and other surveys across the Australian cropping region are repeated on a five year cycle to show:

A total of 427 paddocks were visited, 244 in NSW and 183 in Queensland. In 80 (19%) of these paddocks no weeds of the collected species were present. The most common species collected were sow thistle found in 197 paddocks (NSW – 109; Qld – 88) and wild oats with 182 samples collected (NSW – 118; Qld – 64). Sixty four samples of the different turnip species (wild turnip, African turnip weed and turnip weed) were collected in both states as was wild radish (14 samples). Ryegrass (94 samples), brome grass (15), barley grass (9) and Indian hedge mustard (6) were collected only in NSW.

Where present, samples were also collected of fleabane, awnless barnyard grass, feathertop Rhodes grass and windmill grass. These species were also targeted in a survey conducted prior to harvest of the summer crops. The samples collected from both these surveys will be screened for resistance to a number of herbicides in the future.

At the same time as the sample collection the densities of the collected species and any other species in the paddock are estimated. Densities are classified as very low (occasional plant), low (<1 plant/m2), medium (1-10 plants/m2), high (>10 plant/m2) and very high (>10 plant/m2 and dominating crop). To allow for differences in biomass and competitiveness, species smaller than ryegrass have higher thresholds, while those larger have lower thresholds.

Ryegrass was more commonly found in the southern section of the surveyed area, with very few samples collected north of Gunnedah – Coonamble (Figure 1). Most ryegrass populations were present at less than one plant/m2 (very low – 33%; low – 37%) however 23% of populations were present at greater than 10 plants/m2 (high and very high). Among all of the other species collected, only wild oats (9 – high) and sow thistle (3 – high; 1 – very high) had more than one population recorded at the higher densities. 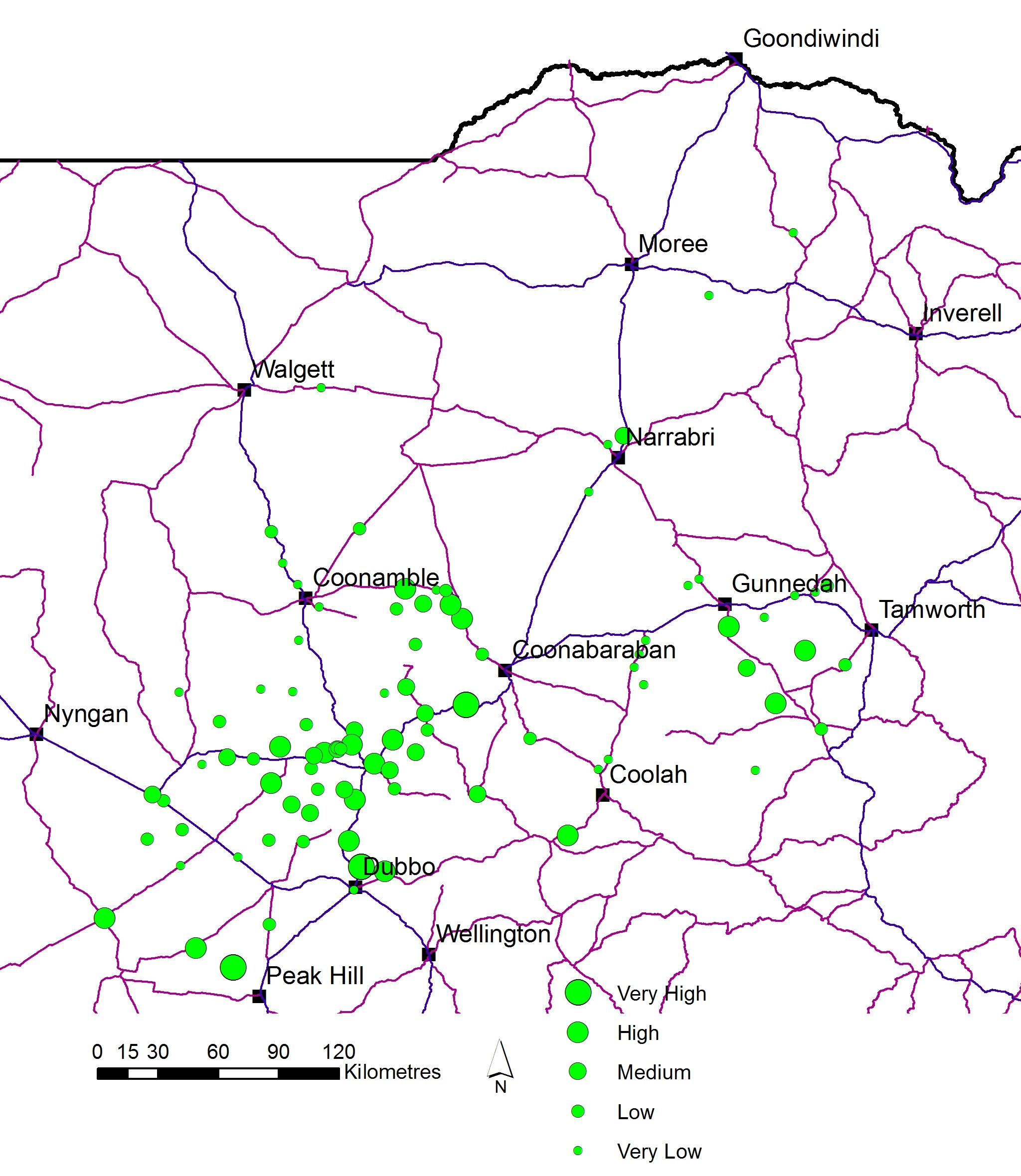 The ryegrass samples were screened to eight different herbicide groups with resistant populations found to six of these (Table 1). A lower percentage of samples were classed as (combined developing resistance 10-20% survival and resistant - >20% survival) to the selective herbicides than across Australia or NSW. However double the number of populations were classed as resistant to the knockdown herbicide glyphosate, than across Australia and five times more than the remainder of NSW (Table 1). Of the nine populations classed as resistant to glyphosate, six (66%) of them were located on the Liverpool Plains, even though only 18 (19%) of the 94 ryegrass populations were collected in this region.

The ability of much of this region to grow both winter and summer crops combined with the use of fallow in the off-season, places high selection pressure on the herbicides used in the fallow phase. With ryegrass present in the winter fallow in some of this region and mostly sprayed with glyphosate at this time the higher level of glyphosate resistant ryegrass populations is to be expected.

The level of trifluralin resistance is much lower than reported for the remainder of NSW and across Australia. The development of resistance is related to the number of times that herbicide is used. Trifluralin use in the northern region is lower than in the south for several reasons including:

Results from Australian Bureau of Statistics Agricultural Survey data for the amount of canola grown show higher levels of trifluralin resistance in those shires with higher percentage of canola and compared with southern NSW less canola is grown in the northern region.

Table 1. Percentage of ryegrass populations classed as resistant from the most recent surveys across Australia and in NSW. Resistance levels are as defined by the various researchers.

Sow thistle plants were reported at 197 of the 427 sites visited, with nearly 90% of these populations found at plant densities below one plant per square metre. Approximately 48% of the populations were found at a very low density (occasional plant) with an additional 40% of populations present at a low or less than one plant/m2 density. 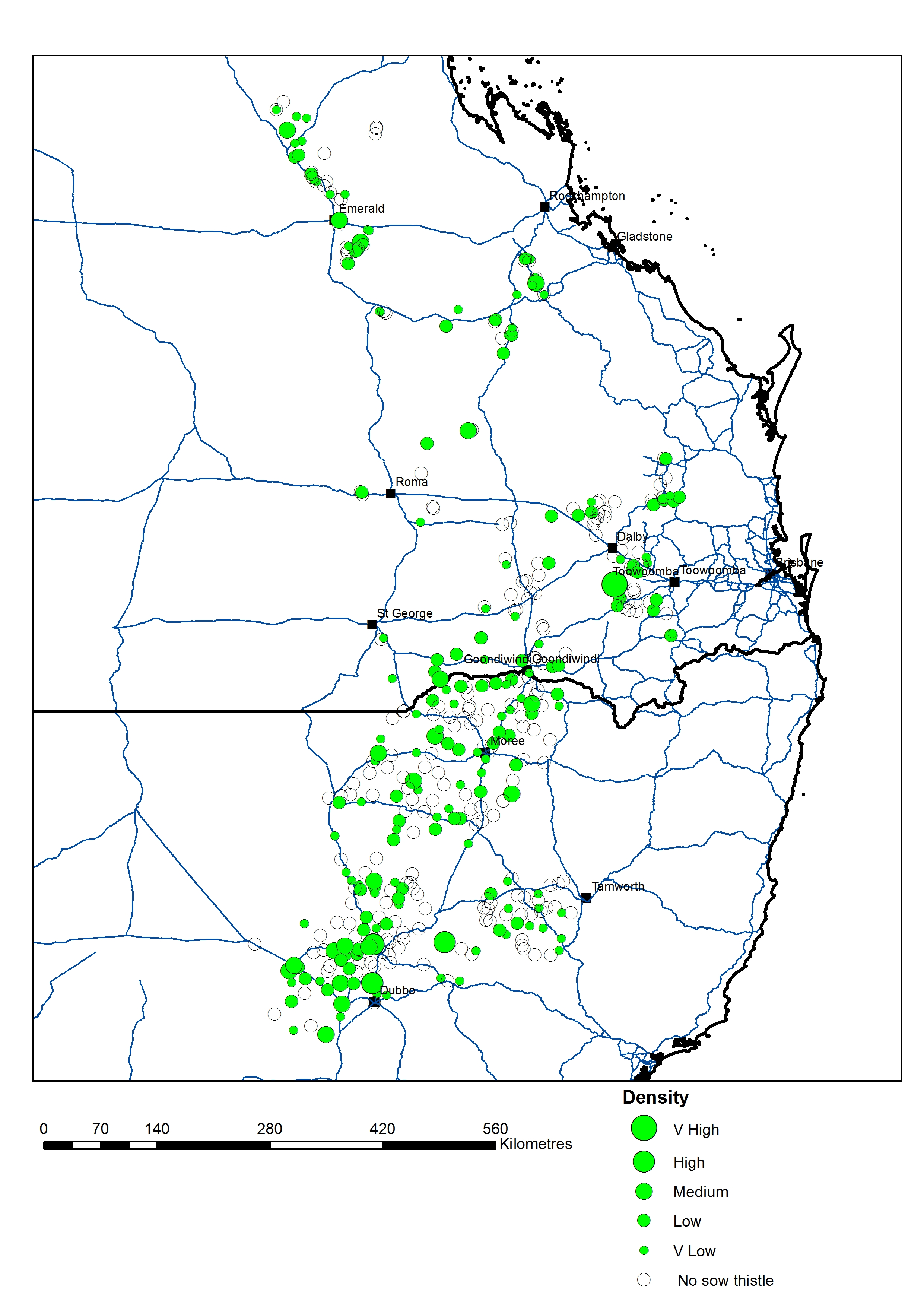 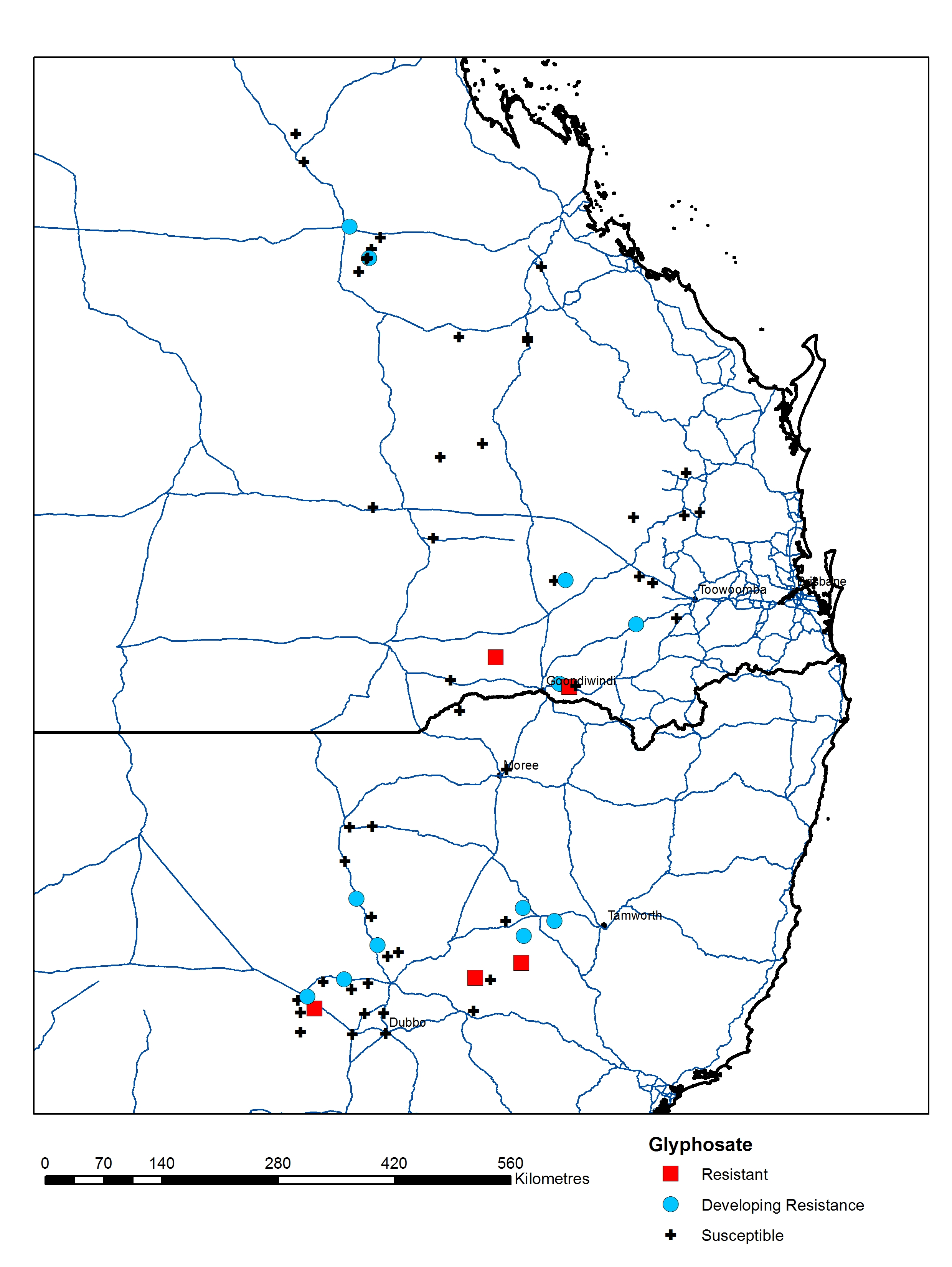 Wild oats were the second most common species in this survey present in 182 paddocks across the surveyed region, with the majority present at very low (43%) or low (41%) densities (Figure 4). The two common wild oat species (Avena fatua and A. ludoviciana) were found across the surveyed region in either pure or mixed populations. The wild oats will be screened for resistance later this year. 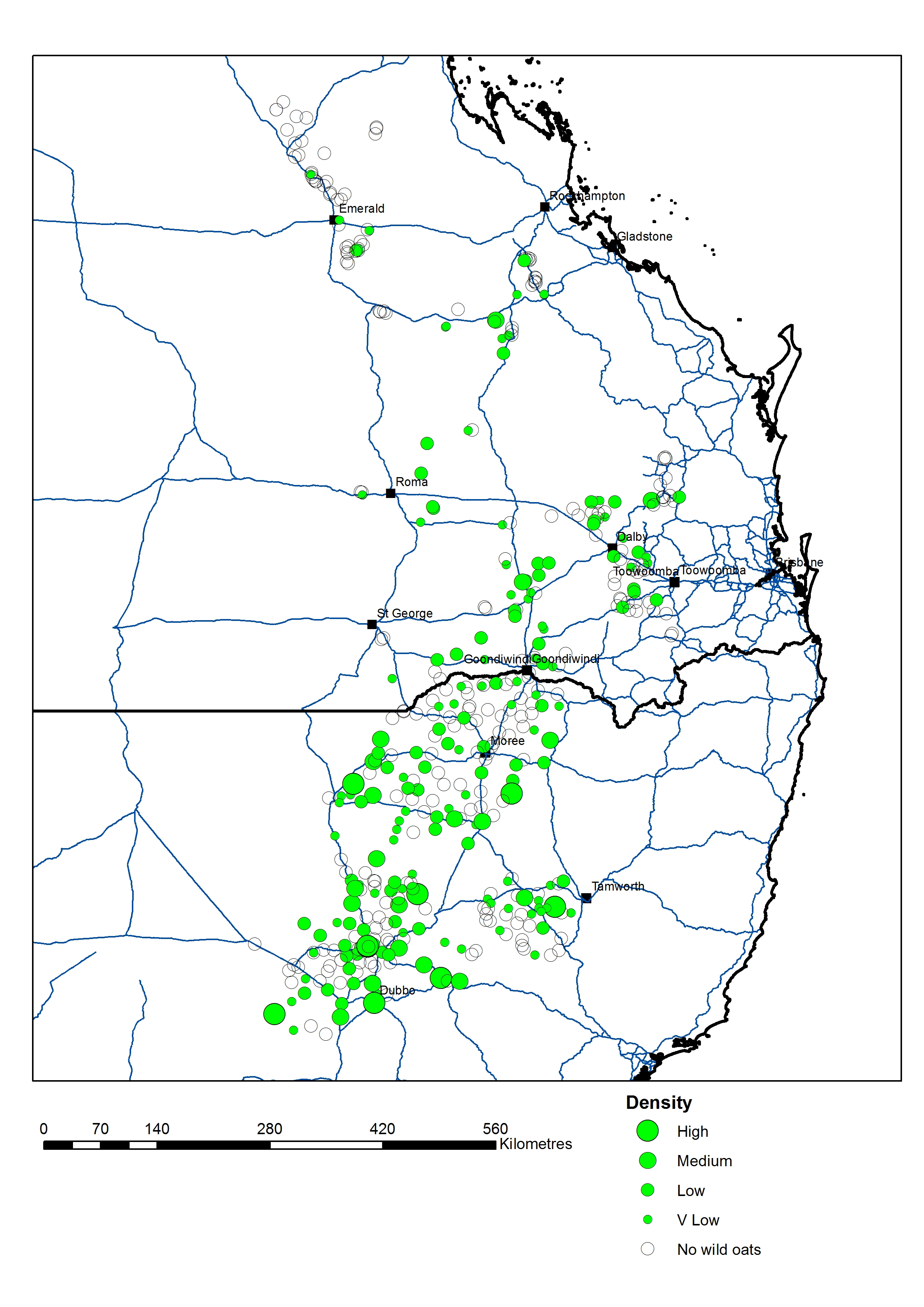 The research undertaken as part of this project is made possible by the significant contributions of growers through both trial cooperation and the support of the GRDC, the authors would like to thank them for their continued support. The work of numerous students and casual staff at Charles Sturt University who have assisted in both the surveys and the resistance screening is much appreciated. The assistance of Neil Clark and Associates who provided the ABS data is acknowledged.