Chickpeas, wheat and Pratylenchus thornei: build-up and decline in the farming system. Chickpeas – a combination of susceptibility and moderate tolerance.

Background: Pratylenchus thornei in the northern grain region and their management

The root-lesion nematode Pratylenchus thornei is found in soils in two-thirds of fields in the northern grain region.  The nematode feeds and reproduces in the roots of plants and can cause yield loss because it reduces the ability of roots to take-up water and nutrients.  Populations of the nematode build-up under susceptible crops, are able to survive fallow periods and carry-over into the next cropping season.  There are no registered chemical control methods to reduce P. thornei.  When P. thornei is present in fields at damaging populations (greater than 2/g soil), management relies on:

When P. thornei populations are reduced to very low populations, crop variety choice is expanded and farm profits are maximised.

Definition of tolerance and resistance

Crop varieties can be tolerant but susceptible, that is they produce good yields, but allow the nematode to increase in population.  The ideal combinations for management of P. thornei are varieties that are tolerant AND resistant.

Resistance and tolerance of chickpea

Repeated two-year experiments to determine the tolerance and resistance of chickpea varieties were conducted at Formartin, Queensland in 2014-15 and 2015-16.  In the first year of each experiment, the wheat varieties QT8343 (moderately resistant to P. thornei) and Kennedy (susceptible to P. thornei), were grown to establish low or high P. thornei populations in a replicated, randomised block design.  In the second year of each experiment, varieties or advanced lines of chickpea, and wheat varieties with moderate resistance and susceptibility were planted following the established design.  Nematode populations were determined by PreDicta®B tests at planting and at harvest in the second year of the experiment.

The take home message from these experiments is that chickpea varieties are generally moderately tolerant to P. thornei.

Resistance or nematode reproduction in chickpea

Populations of P. thornei increased after growing chickpea varieties compared to the initial P. thornei populations present at planting (Pi) which was 7/g soil averaged over both experiments (Figure 1). 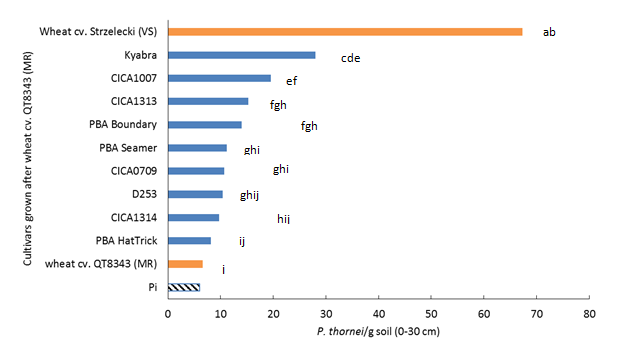 Chickpeas generally have a good level of tolerance to P. thornei but because most chickpea varieties are susceptible to P. thornei, populations of the nematode will increase to attack future crops.  Consider the impact of growing chickpeas in your crop sequences if you are trying to reduce P. thornei populations or keep them at low levels.

Several two-year field experiments to determine the impact of increasing P. thornei populations on the yield of wheat varieties that range from intolerant to tolerant have been conducted in Queensland at Formartin and Westmar.  This paper reports results from 2017 at Westmar in a very dry season.

Table 1.  Wheat varieties grown in the second year of the experiment at Westmar, Queensland, the range of P. thornei populations for each variety before planting and yield loss during that season

bYield loss was calculated for the minimum and maximum P. thornei at planting from the yield response curves for each variety (Figure 2).

Despite the dry seasonal conditions which restricted yield potential of each variety, there was a significant (P<0.001) negative relationship between yield of each wheat variety and P. thornei populations at planting except for Suntop (Figure 2).

Suntop was the highest yielding variety (average 1.5 t/ha) and its yield did not change in response to increasing P. thornei populations.  This is an interesting result because Suntop has a higher level of resistance than EGA Gregory which is moderately susceptible to P. thornei but both have a similar tolerance rating. 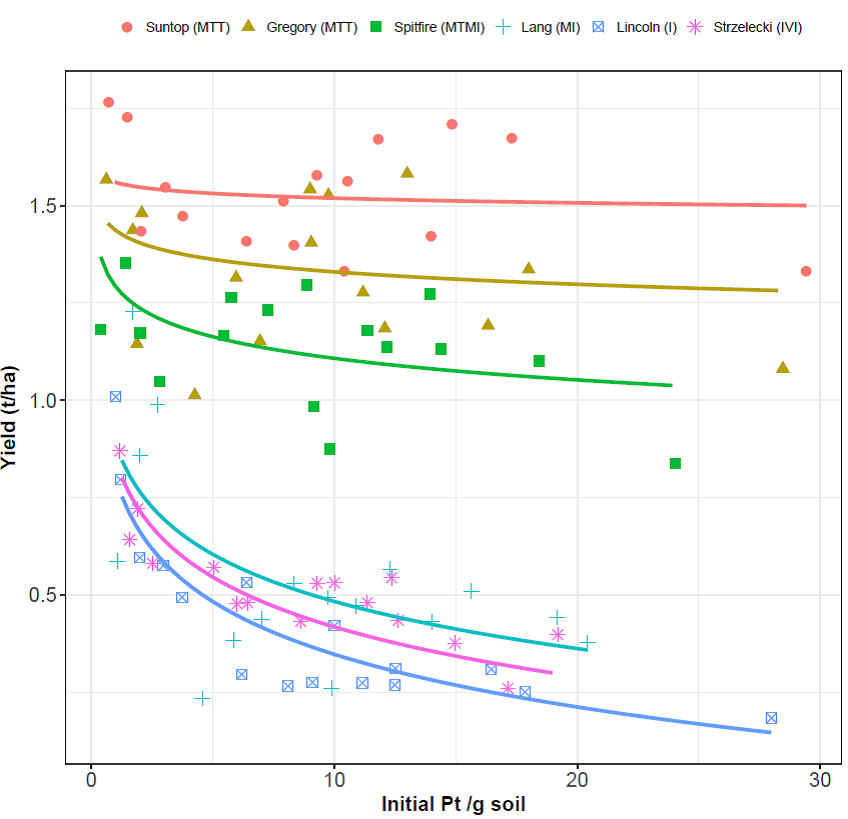 Figure 2.  The yield response of six wheat varieties to P. thornei populations present at planting (Initial Pt/g soil at 0-30 cm soil depth; backtransformed) at Westmar, Queensland in 2017.  There was a significant yield response of each variety to P. thornei populations at planting, except for Suntop to the (P<0.001).  Figure provided by Karyn Reeves, Curtin University.

The take home message on yield response of wheat to P. thornei

We would especially like to thank Alex Gwynne and family, and James Coggan for their generous support of our field trials.

Thank you to Doug Lush (QDAF) for running the Westmar trial, Kerry Bell (QDAF) for statistical analyses, Kevin Moore and Kristy Hobson (NSW DPI) for advice and supply of chickpea seed, and to all in the Crop Nematology team (Centre for Crop Health, USQ) for their support.