Northern Grower Alliance (NGA) have been heavily involved in nitrogen (N) management trials in wheat since 2012. Early activity evaluated the practicality and economics of late in-crop application with the focus shifting to fallow or at planting management in 2014. The project activity was initiated to investigate approaches to improve the management of high yielding and frequently lower protein achieving varieties such as EGA Gregory, but in recent years has also focussed on the crop performance from surface spread urea and evaluating the impact of application timing.

Rather than focussing on actual trial results from the 2017 season, this paper will focus on a concern that has been evident across the entire series of trials - the low N use efficiency of fertiliser applied in the year of cropping.

Grain N recovery in wheat has been calculated in trials from 14 individual locations conducted during the 2014-2017 seasons. A wide range of production conditions have been experienced with yields ranging from ~1 to 5t/ha. Three steps were taken in calculating the grain N recovery from fertiliser:

NB Data from two trials at Billa Billa 2017 site included. IBS = Incorporated By Sowing, PSPE  = Spread Post Sowing Pre Emergent. Recovery data for each urea rate was generated from one application timing in 2014 but 3 timings in all 2015-2017 trials.

Grain N recovery from available soil N was also calculated for all trials in 2016 and 2017. Soil N was measured to 120cm at both planting and harvest. (Data from 2014 and 2015 was not included as soil N was only assessed during the fallow for site selection and often to 60cm depth). Two steps were taken in calculating the grain N recovery from soil N:

NB: an estimate of the quantity of N mineralised during the cropping season was not included for any calculation but was assumed to be consistent for all treatments.  Inclusion of an estimate of mineralised N would lower the % grain recovery for both soil and fertiliser but unlikely to change the relative differences.

Table 2. % grain N recovery from soil only, fertiliser only or combined soil and fertiliser application in 6 trials 2016-2017

NB: The mean and range used for ‘fertiliser only’ is for the most efficient rate (50 kg N/ha) from Table 1.

N fertiliser recommendations are generally based on setting a target for yield and protein and then ensuring a quantity of soil and fertiliser N that is generally double that target (i.e. working on a 40-60% grain N recovery efficiency). This approach is generally effective, but on the basis of these results, will struggle when soil N levels become low. Common examples would be:

In these situations, N fertiliser application rates may need to be increased to commercially impractical and uneconomic levels to achieve the expected outcome. In some situations with very low starting N quantities, a change from cereal to a legume may be a much better option.

Why is the fertiliser efficiency so low in the year of cropping?

One possible reason for the low observed efficiency of grain N recovery from fertiliser applied in the year of cropping may be the amount and speed of N movement in soil. During 2015-2017 a primary objective has been to evaluate the impact of N application, into a dry soil profile, during the fallow. The hypothesis was that the applied N would move further with fallow rain events so that N would be deeper and more uniformly distributed by planting.

Figures 1 and 2 are indicative of the results achieved following N application during the fallow in 2015/16 and 2016/17. Figure 1. Soil distribution of N at Mullaley at planting (May 2017) following application of urea in January or February 2017. 175mm of rain were recorded between the January application and planting. 140mm of rain were recorded between the February application and planting.
(NB: Both N applications were spread and not incorporated. Sampling method - 6 individual 0-120cm depth cores taken per plot. Samples from each depth were bulked with a single sub sample taken for analysis. Not replicated.) 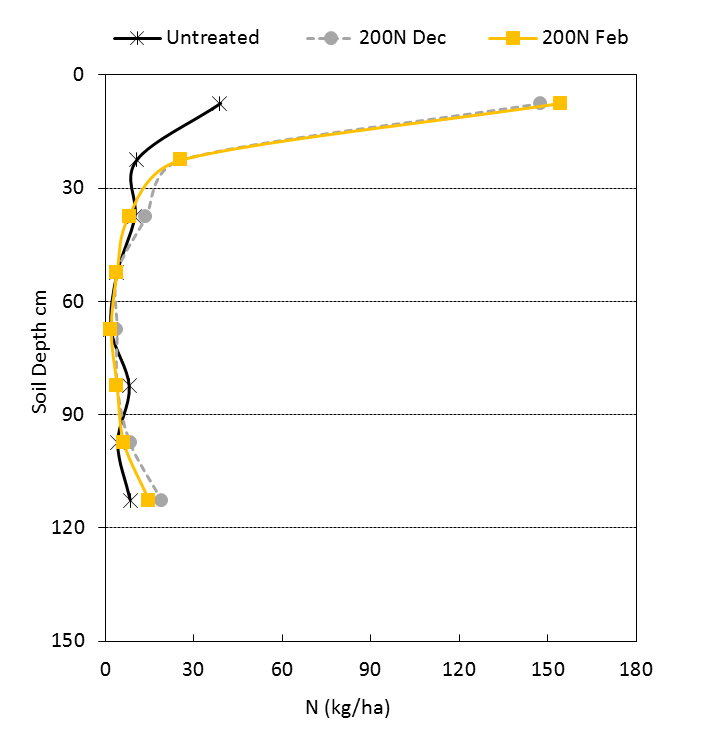 Figure 2. Soil distribution of N at Tulloona at planting (June 2016) following application of urea in December 2015 or February 2016. 225mm of rain were recorded between the December application (spread and incorporated) and planting. 65mm of rain were recorded between the February application (spread and not incorporated) and planting.
(NB: Sampling method - 6 individual 0-120cm depth cores taken per plot. Samples from each depth were bulked with a single sub sample taken for analysis. Not replicated. )

The slower observed movement of N in soil may explain why in 10 of the 11 application timing trials there has not been a significant advantage from fallow N application compared to N applied at planting - as long as there were reasonable levels of in-crop rain.  The 2017 season was however characterised by useful fallow rains (particularly in March) but with very low levels of in-crop rain (particularly June-September).

The site at Billa Billa in 2017 was the first to show a significant benefit from both fallow N applications compared to the same quantity applied at planting (or in-crop).

Figure 3 shows the distribution of soil N at planting from fallow application with the majority of N in the 0-15cm depth for both December and March 2017 application, but with apparent increased movement from the December application. This site had the deepest movement of N recorded in any of the trials in 2016 or 2017. 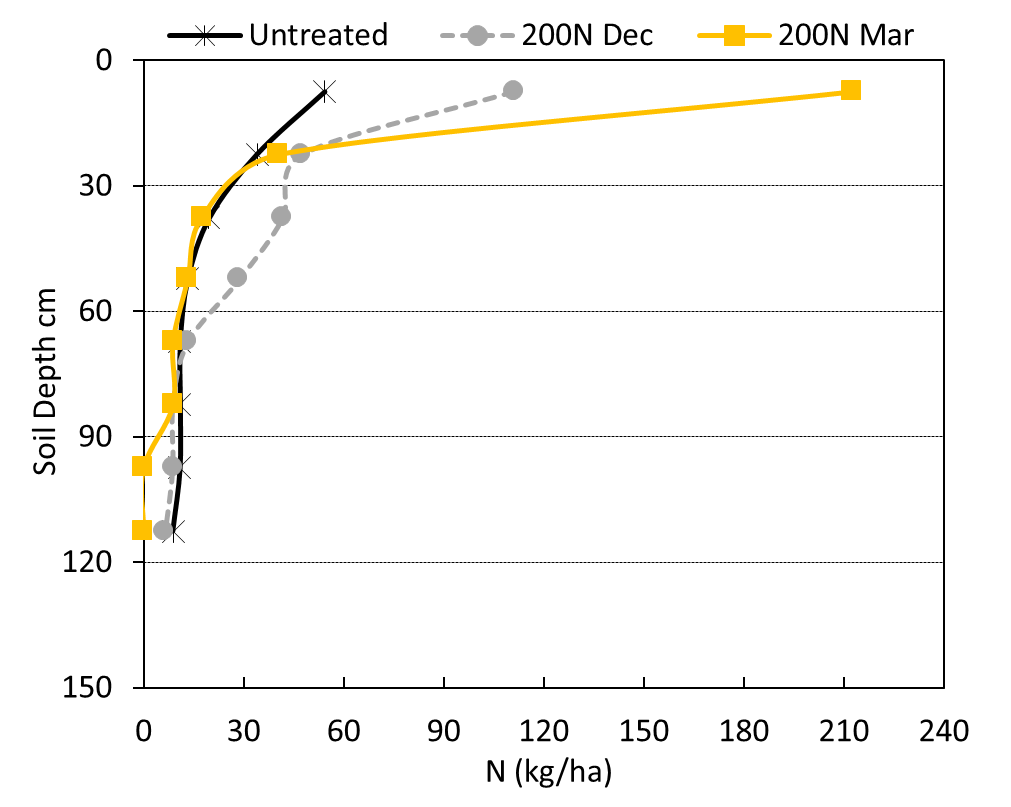 Figure 3. Soil distribution of N at Billa Billa at planting (May 2017) following application of urea in December 2016 or March 2017. 279mm of rain were recorded between the December application and planting. 154mm of rain were recorded between the March application and planting.
(NB: Both applications spread and not incorporated. Sampling method - 6 individual 0-120cm depth cores taken per plot. Samples from each depth were bulked with a single sub sample taken for analysis. Not replicated.)

Figure 4 shows the yield results (variety Lancer) at this site. There was no significant N response from fertiliser applied at planting (or in-crop) at this site, with only 71mm of in-crop rain received between planting and the end of September. However applications in December or March provided a significant increase in both yield and protein (not presented). 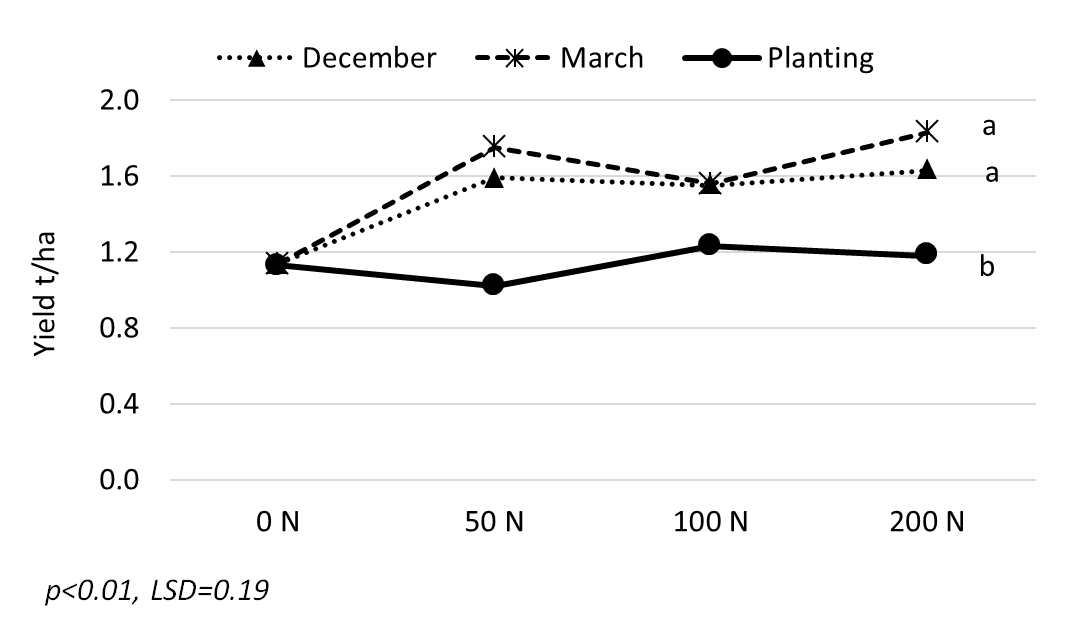 Figure 4. Effect of application timing and N rate on yield, Billa Billa 2017
(Treatments that share the same letter are not significantly different at P=0.05. All N rates were spread only)

Table 3 shows the distribution of N (in excess of Untreated levels) by soil depth at harvest and the quantities of rainfall recorded between application and planting or harvest.

NB Soil recovery from the PSPE application was very low in this trial with the first useful rainfall (9mm) 37 days after application. Unfortunately soil sampling was not planned/conducted in plots where N was incorporated by sowing for comparison.

How much nitrogen was actually recovered at harvest?

Assessment of the fertiliser N fate (in grain, soil and stubble) was conducted in 2015, 2016 and 2017 but with no attempt to estimate the residual N in the root system. Table 4 shows the mean quantities of N, in excess of the level where no fertiliser N was added. In 2015, results were only assessed for 200 kg N/ha applied and incorporated by sowing. Results in 2016 and 2017 are a mean of 4 application timings. In 2016, 3 of the 4 applications were spread and not incorporated with all applications spread and not incorporated in 2017.

Was nitrogen still available for the following crop?

Two of the trial sites from 2016 (Tulloona and Macalister) were planted to winter crop in 2017 and were monitored for response and benefits in the ‘year 2’ crop. Table 5 shows the soil test results taken at planting and harvest in year 2.

NB Sampling method - 4 individual 0-120cm depth cores taken per plot. Samples were separated into 0-30 and 30-90cm intervals with each depth bulked and a single sub sample taken for analysis. 4 replicates sampled in each treatment.

The Tulloona site was commercially planted to chickpeas and the Macalister site was planted to wheat. At Tulloona, at the end of September it was visually apparent that all plots that had received the 200 kg N/ha rate in year 1 were ‘greener’ than the remaining plots and the trial warranted harvest. Previous wheat results had indicated the most consistent N response was in grain protein, so yield and grain quality were assessed at both sites. Figures 5 and 6 show the yield and protein responses in year 2. 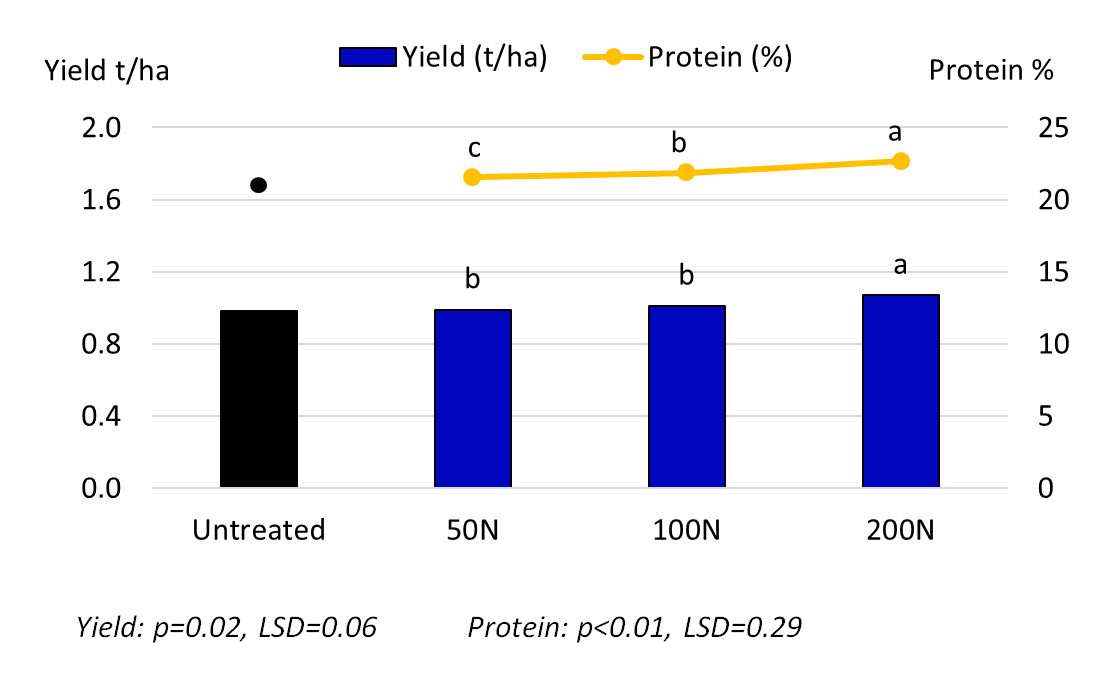 Figure 5. 2nd year Impact of N rate - Chickpeas, Tulloona 2017
(Treatments that share the same letter, within an assessment, are not significantly different at P=0.05. Results for each N rate are from a factorial of 3 timings x 2 varieties. Untreated not analysed and included for comparison only) Figure 6. 2nd year Impact of N rate - Wheat, Macalister 2017
(Treatments that share the same letter, within an assessment, are not significantly different at P=0.05. Results for each N rate are from a factorial of 3 timings x 2 varieties. Untreated not analysed and included for comparison only)

This series of trials over 4 cropping seasons and 14 trial locations has provided results that question some of our current management practices.

The results from this work indicate we still have much to learn, or at least to refine, with the management of our most important and best understood nutrient for cereal production. Any practices that can improve the efficiency of N accumulation from the legume phase are going to be exceedingly valuable, together with methods to increase the efficiency of fertiliser N use in the year of cropping.

NGA would particularly like to acknowledge the assistance from our trial co-operators during this series of trials: Scott Ferguson, Jason Schelberg, Lee Maxwell, The Frater Family, Drew Penberthy, Michael Leddingham, Hugh Ball, Simon Doolin, George Picton, Peter Butler and Anthony Martin together with Kalyx staff for trial planting, maintenance and harvest. In addition we would like to thank AGT and Pacific Seeds for seed supply.