Use the prescribed best practice of rotation and fungicide regimes to minimise the selection pressure and build-up of highly aggressive fungal isolates in your local fungal populations, because these can cause significant crop loss on all current chickpea cultivars.

The research shows that:

This information is used to improve disease management strategies, including using the worst (most aggressive) isolates for use in screening in the PBA chickpea program’s resistance breeding. However, higher frequencies of aggressive isolates have resulted in increased disease severity on broadly grown cultivars, including on PBA Seamer. The resultant resistance erosion in PBA HatTrick is due to an increase in the number of highly aggressive isolates in the region. This is likely caused through environmental factors that impose selective pressure on the fungal population, including cultivar choice and non-optimal fungicide usage as well as inoculum build-up from minimal to no rotation.

The increase in aggressiveness seen in this long-term study has likely occurred through “pathogen adaptation” - in other words, the fungus has evolved to make more highly aggressive isolates due to “selective pressures” being applied through environmental factors and farming practices. Whilst we often cannot control external environmental factors, we can reduce selection towards evolution of increased aggressiveness by adhering to recommendations of crop rotation and fungicide use. 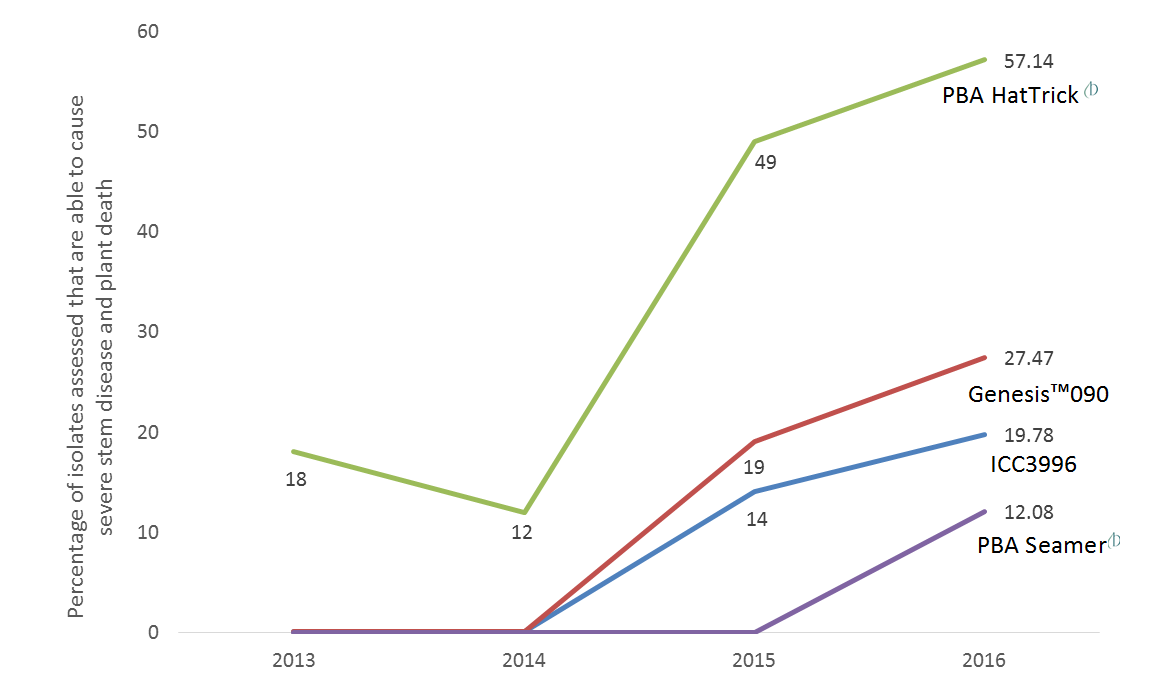 To demonstrate that fungicides, when used appropriately are effective in protecting the crop from the most aggressive isolates of AB, trials were conducted at Turretfield, SA in 2015 and 2016. Seeds were dressed with P-Pickel T® at 200 mL/100kg, fertilised with MAP +Zn (2%) at 90 kg/ha at a sowing density of 50 plants/ m2 (desi) and 35 plants/ m2 (kabuli). Crops were sprayed fortnightly with chlorothalonil or not sprayed. Limitations exist as to the maximum number of chlorothalonil sprays and/or total volume of product that can be used in a crop. Read and adhere to label directions.

The inoculum was Ascochyta infested chickpea stubble collected from SA chickpea trials in 2015 and from SA trials and commercial crops in 2016. The study clearly showed that fungicide treatment is absolutely necessary for many of the older varieties; in contrast chlorothalonil provided no or little benefit on several of the newer CICA lines (Table 1). This highlights the need to adopt the correct recommended chemical and spray regime for the specific cultivar that is grown.

Meanwhile, as the fungal population increases in aggressiveness, the disease rating of each cultivar must be reassessed on an annual basis to maintain accuracy for informing disease management strategies. In 2015, several cultivars showed good resistance to AB (i.e. Genesis™090 and Genesis™079). In 2016, high disease severity was observed across all lines, with significant yield losses (i.e. Genesis™090 had ~30% disease severity and 30% yield loss, although it is still considered the best of the commercial cultivars in the southern region). All commercial lines used in southern growing regions are now considered S or MS to AB.

Table 1. The impact on yield from regular chlorothalonil treatment on a range of chickpea cultivars and advanced breeding lines, and recent changes to cultivar disease ratings (southern region).

Varietal ratings to AB have also changed in northern growing regions under a separate rating system, demonstrating that evolution of the pathogen is occurring at a national level (Table 2).

Table 2. Changes in Ascochyta ratings (northern region) for selected chickpea varieties from time of release to 2017.

To identify material that is the most resistant to the pathogen, entries in the PBA Chickpea Stage 3 trials that show desirable disease and agronomic traits and may progress to be released varieties, as well as existing cultivars, are screened annually with the WORST isolates identified in the previous growing season. Disease severity is measured as the mean % main stem breakage under shade house trials performed at SARDI. The breeding program has developed material with better resistance than PBA Seamer to isolates from northern NSW/Qld (ie Yallaroi and Narromine) (Table 3).

To prolong cultivar lifespans (i.e. PBA Seamer) and maintain profitability, the following best management practices must be followed by all growers:

One last point to consider

Do not be complacent; if you follow best disease management practice, you will reduce the AB risk to yourself and your neighbours. The fungus is already present in your region and an epidemic will happen with optimal conditions, selective mutation and sufficient inoculum. Judicious integrated disease management will avoid crop failure and ensure a profitable outcome.

The research undertaken as part of this project is made possible by the significant contributions of growers through both trial cooperation and the investment of the GRDC, the authors would like to thank them for their continued support.