Many annual weeds in Australian cropping systems retain their seed at maturity and thus are collected by the harvester. Harvest weed seed control (HWSC) is enabled by a suite of management practices all of which target the seed of weeds during harvest. Current HWSC systems include narrow windrow burning, chaff lining, chaff carts, bale direct and seed destruction (Walsh et al. 2013).

Two factors influence the level of control provided when using HWSC. Firstly, the proportion of weed seed production entering the front of the harvester; and secondly, the efficacy of the HWSC system used.

By reducing the quantity of material being processed by the harvester stripper fronts increase the speed and efficiency of harvesting. Anecdotal evidence suggests that stripper fronts are particularly effective in harvesting lodged and fallen crops, as the fingers can lift and remove the heads without the need for collecting large amounts of crop material.

The use of stripper fronts does have some disadvantages. Tall standing stubble carries increased fire risk and requires sowing equipment which can clear the stubble. Harvester settings need to be changed due to the decreased volume being processed, which requires some expertise and experience. A faster harvest rate can have logistical implications - for example; more grain trucks may be required to keep up with the harvester.

As one of the most popular HWSC systems, chaff lining has potential for wide-spread adoption across Australia owing to its relative low cost and ease-of-implementation. Chaff lining is the practice of concentrating the weed seed bearing chaff fraction directly behind the harvester rather than on controlled traffic farming (CTF) tram tracks. The chaff environment is likely to be suboptimal for seed persistence and seedling establishment, and therefore, this practice has the potential to be as effective as other forms of HWSC in depleting weed seed banks.

The annual ryegrass seed collection effectiveness of stripper and conventional harvester fronts was compared in wheat paddocks on two different farms near Wagga Wagga during December 2017. The annual ryegrass plants selected were scattered over a large area of each paddock, and a variety of plant sizes were included.

At each site, 50 additional plants were marked pre-harvest and the number of seeds present on each was estimated. Once the stripper front had harvested the area, any remaining plant material (standing or on the ground) was collected. The number of seeds collected after harvest were compared with the number estimated to have been on the plant originally to determine the weed seed collection efficacy of the stripper front.

The amount of chaff produced by stripper and conventional fronts, in this case a draper type front was determined by collecting the chaff produced during the harvest of three 100m lengths of wheat crop for each front. During harvest a large bag was attached to the chaff-line chute at the back of the harvester. The same harvester was used for each of the lengths and the harvest height was set at 15cm for the draper front lengths. The chaff produced from each length was collected and weighed.

Pot trials at three locations; Toowoomba, Wagga Wagga and Narrabri investigated the influence of wheat, barley, canola and lupin chaff on the seedling emergence of annual ryegrass. At each location eight rates of chaff (0, 3, 6, 12, 18, 24, 30, and 42t/ha) were placed over annual ryegrass seed on the surface of pots/trays filled with potting mix. Once the chaff was evenly spread across the soil surface, the pots were watered thoroughly and kept moist for the duration of the study. Emerging annual ryegrass seedlings were counted and removed every seven days for 28 days. Differences between chaff types and rates were assessed using the total germination over the 28-day period.

This formula is based on previous experimentation in wheat (data not shown), where chaff yield was determined to be equivalent to approximately 30% of the harvested grain weight. For example, using a wheat yield of 3.5t/ha, a 12m harvester width and a 30cm chaff line width, the amount of chaff concentrated into a chaff line would be 42t/ha.

At both sites it was estimated that a conventional front cutting at 15cm would have collected the same proportion of ryegrass seed, approximately 85% (Figure 1). At Site 1 the proportion of seeds collected by the stripper front was identical to that of a conventional front. This result clearly highlighted the potential for stripper fronts to be used in conjunction with HWSC systems. In contrast though at site 2 a lower proportion of ryegrass seed was collected by the stripper front. This could be due to numerous factors; row spacing was greater at this site and the harvester was running faster and higher than at Site 1, which could have reduced the seed collection and, therefore HWSC efficacy. The result at this site indicates that when using a stripper and a HWSC system there will need to be some attention given to ensuring maximum annual ryegrass seed collection. 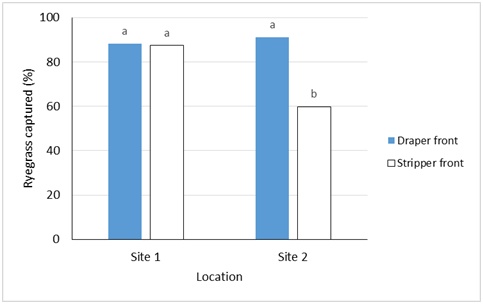 Figure 1. Percentage of ryegrass seed collected by stripper front and conventional front at two locations (Means with same letter are not significantly different)

A stripper front can collect a similar proportion of annual ryegrass seeds as a conventional front. However, header speed, height, settings, crop variety and row spacing can all influence the weed seed collection by both types of harvester front. The amount of weed seeds collected by all harvester fronts is also dependent on the weather and the amount of seed shedding which has occurred before harvest. 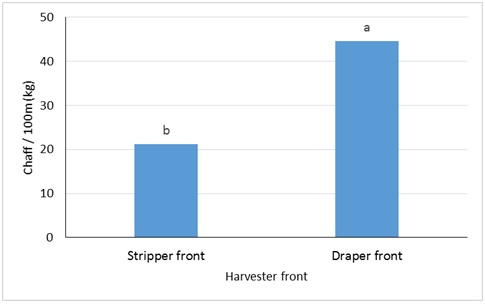 At all three locations, increasing amounts of wheat chaff reduced annual ryegrass germination and emergence. There were differences between locations in the amount of chaff required to significantly reduce germination. At Wagga Wagga the presence of any chaff resulted in a significant reduction in ryegrass emergence (Figure 3) but there was no difference between 3 and 12t/ha and 30 and 42t/ha gave the largest emergence reduction. At Narrabri (Figure 4) it was not until 18t/ha of chaff was produced that there was a significant reduction in annual ryegrass germination while at Toowoomba (Figure 5) it was not until 24t/ha of wheat chaff was present that there was a reduction in emergence. Figure 3. Emergence of annual ryegrass through wheat chaff at eight different rates (t/ha) in a pot trial conducted at Wagga Wagga, NSW (Means with same letter are not significantly different). 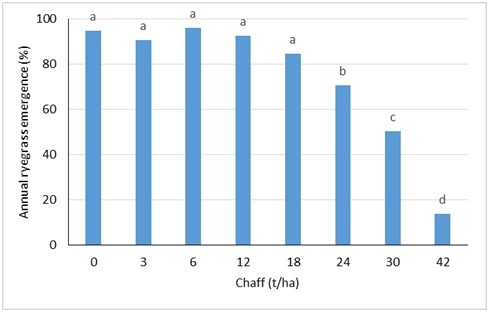 Figure 4. Emergence of annual ryegrass through wheat chaff at eight different rates (t/ha) in a pot trial conducted at Narrabri, NSW (Means with same letter are not significantly different). 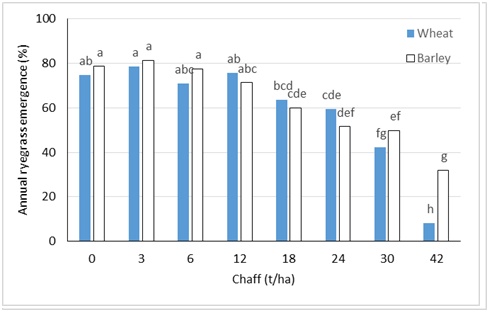 Figure 5. Emergence of annual ryegrass through wheat and barley chaff at eight different rates (t/ha) in a pot trial conducted at Toowoomba, Qld (Means with same letter are not significantly different).

The chaff type also influenced emergence but results were variable. At Toowoomba there was no difference between wheat and barley chaff except at 42t/ha when wheat had a significantly lower level of emergence than the barley chaff (Figure 5). At Wagga Wagga, while there was interaction between species and chaff amount (Figure 6) overall barley inhibited emergence better than wheat, and both were better than canola and lupins. 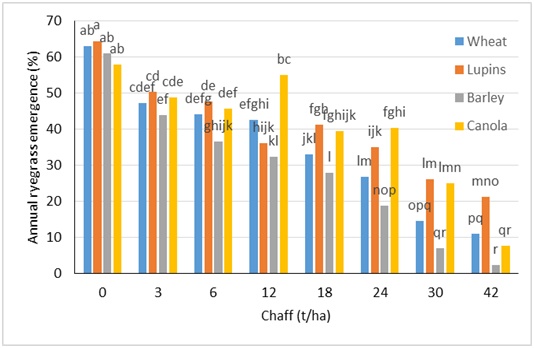 The greater emergence inhibition by the barley chaff at Wagga may be due to it being a greater physical barrier. That is, for any weight of chaff more barley chaff was needed than wheat chaff with lupins and canola requiring even less. It is however unlikely that all crops and/or species are going to have the same chaff percentage, and a harvester using a stripper front is also going to produce less chaff (Figure 2) for a chaff line. A barley crop is likely to have a lower chaff proportion than a wheat crop. With a 12m wide harvester forming a chaff line 30cm wide and a chaff proportion of 0.3 then 42t/ha of chaff equates to a 3.5t/ha crop (Figure 7). However, if the chaff proportion is 0.2 then 42 t/ha equates to a 5.25t/ha crop conversely with a chaff proportion of 0.5 a crop of only 2.1t/ha is required to produce a chaff line of 42t/ha. 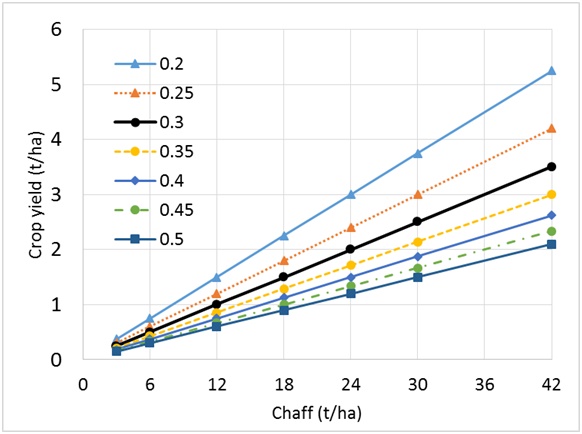 It was found that a stripper front can collect the same proportion of weed seeds as a conventional front but this will depend upon several crop and harvesting conditions. Consequently, the results indicate that the use of stripper fronts is compatible with HWSC but care is needed in harvester operation to maximise seed collection and the influence of crop architecture on weed seed collection needs further investigation.

The results of the pot experiments indicate that emergence of annual ryegrass can be significantly suppressed by chaff with suppression increasing with increasing amounts of chaff.

Different crop species also provided different rates of reduction in emergence, although for wheat and barley the relative effectiveness varied between the two locations. At Toowoomba there was no difference between the two crops except at the highest chaff rate when wheat provided a higher inhibition of emergence while at Wagga Wagga barley gave increased emergence inhibition overall. At Wagga Wagga where lupins and canola were also tested these chaff types provided a lower rate of reduction in seedling emergence than the two cereal chaff types.

Further work is needed on the chaff proportions of the different crops to determine if the chaff rates used here were appropriate for all species. Additionally with less chaff produced by a stripper front, chaff lining will be less effective than when using a conventional front in crops with the same grain yield. In summary, chaff lining can considerably reduce weed emergence given sufficiently high chaff loads.

The research undertaken as part of this project is made possible by the significant contributions of growers through both trial cooperation and the support of the GRDC, the authors would like to thank them for their continued support. The work of Allison Chambers (CSU), Linda Heuke (US), Shona Robilliard (US) Kerry Bell(QDAF) and Onella Cooray(QDAF) and a number of CSU students in assisting in the establishment assessment of experiments is gratefully acknowledged.