Canola – what disease is that and should I apply a fungicide?

’Major’ diseases – to spray or not to spray?

Sclerotinia is a disease that can cause substantial yield loss in some regions in some years. The decision to apply a fungicide is determined by the frequency of previous outbreaks on your farm. If sclerotinia has never been an issue then it is unlikely to occur in the future and fungicides are not warranted. If sclerotinia has occurred in the past, the following factors may help in deciding whether to apply a fungicide:

The most yield loss from sclerotinia occurs from early infection events. Early infection is likely to result in premature ripening of plants with little or no yield. Plants become susceptible to infection once flowering commences. Research in Australia and Canada has shown that an application of foliar fungicide around the 20 to 30% bloom stage (20% bloom is 14 to 16 flowers on the main stem, 30% bloom is approx. 20 flowers on the main stem) can be effective in significantly reducing the level of sclerotinia stem infection. Most registered products can be applied up to the 50% bloom (full bloom) stage.

In general, foliar fungicides offer a period of protection of up to three weeks. After this time, the protectant activity of the fungicide is reduced. In some crops, development of lateral branch infections later in the season may occur if conditions favourable for the disease continue. The greatest yield loss occurs when the main stem becomes infected, especially early. Lateral branch infection results is less yield loss. Use high water rates and fine droplet sizes for good canopy penetration and coverage.

Severe crown canker is most likely to develop when plants are infected during the early seedling stage. The fungus grows from the cotyledons and leaves asymptomatically through the vascular tissues to the crown, where it causes necrosis resulting in a crown canker at the base of the plant. Yield loss results from restricted water and nutrient uptake by the plant. Protection during the seedling stage is critical to reduce crown canker severity. The risk factors for development of blackleg crown canker are well understood in Australia and include intensity of canola production, blackleg resistance of the cultivar, stubble management and rainfall. A decision support tool, BlacklegCM, is available and should be used to assess the risk for blackleg crown canker prior to cultivar selection and sowing. Versions of BlacklegCM are available for iPad or android tablets. BlacklegCM does not work on iPhones. The tool is interactive, allowing growers and advisers to determine the blackleg risk for each paddock and consider the possible economic return of different management strategies. The tool also provides in-season support for the application of foliar fungicides.

Blackleg is able to infect all parts of the canola plant. Upper canopy infection (UCI) is a collective term that describes infection of flowers, peduncles, pods, upper main stem and branches (Figure 1). UCI has become increasingly prevalent over recent years and may be associated with earlier flowering crops because of earlier sowing of cultivars and more rapid phenological development during warmer autumns and winter. There is also evidence of delayed and prolonged release of blackleg spore release in stubble-retained systems and increased intensity of canola production. While the crown canker blackleg is well understood, the factors contributing to UCI and possible control strategies are currently under investigation. An outline of findings to date are presented below. 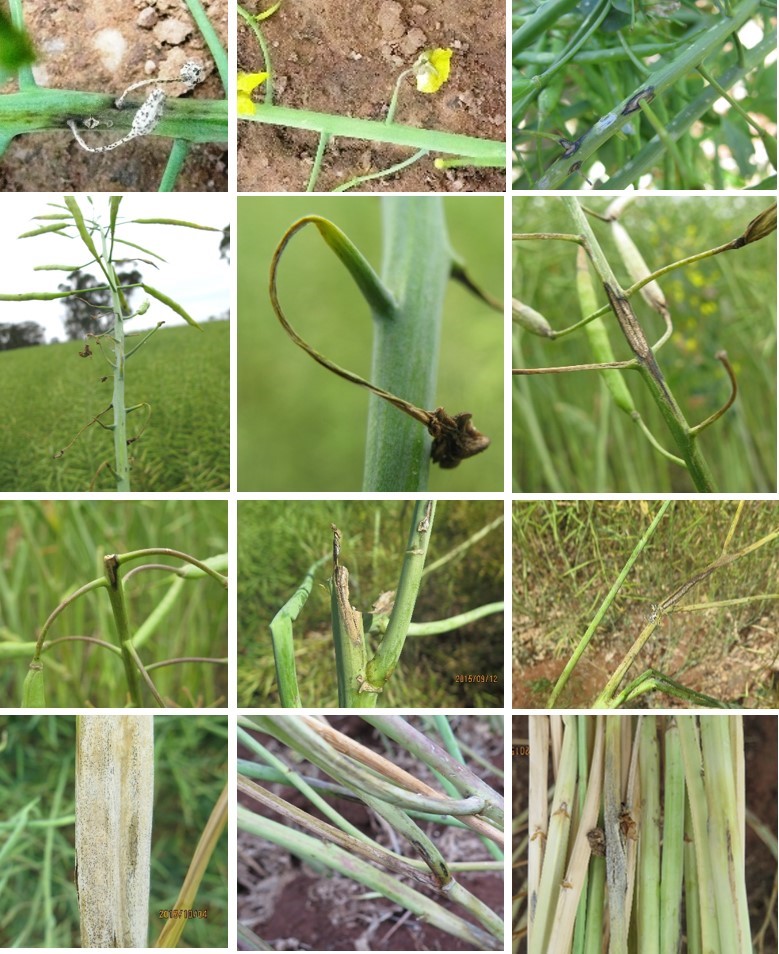 In field experiments, UCI has caused up to 30% yield loss. The impact on yield varies depending on the timing of infection and plant part infected. Flower loss from infection of flowers or peduncles is unlikely to directly reduce yield as the plant is able to compensate by producing more flowers. However, the fungus can grow into the associated branch which can then affect seed set and grain filling in surrounding pods. Infection of pods or peduncles after pod formation can result in significant yield loss. Infected branches and upper main stems can affect all developing flowers and pods above the point of infection causing a reduction in pod and seed set as well as smaller seed. Severe infection can cause stems and branches to break off, premature ripening leading to shattering or difficulty in ascertaining correct windrow timing due to maturity differences between seed affected or unaffected by blackleg.

Entry of blackleg into the plant is via the stomatal openings. Physical damage to the plant by insects, hail or frost, facilitates entry of the pathogen causing severe disease. In NSW and Victoria in 2018, splitting of stems (probably related to frost damage) and hail damage resulted in sporadic severe UCI symptoms on main stems and pods.

It is now thought that UCI infections are also systemic, causing damage to the plant’s vascular tissue similar to traditional blackleg crown infections. The issue for growers is that external symptoms may appear insignificant, but internal vascular damage may cause significant yield losses. Preliminary results indicate this may be why fungicide applications on crops with few symptoms can still result in economic yield returns. Interestingly, researchers have noted that symptoms of internal vascular damage result in blackened stems post the windrowing growth stage i.e. post 100% seed colour change (see Figure 2). Effective major gene resistance prevents infection of all canola plant parts (cotyledons, leaves, stems, branches, flowers, pods). Effective major genes can thereby prevent both crown canker and blackleg UCIs. Unfortunately, most major genes present in current cultivars have been overcome by the blackleg pathogen across many canola producing regions. It is therefore crucial to know if major genes are effective or overcome in your growing region. The Blackleg Management Guide provides information that is relevant for control of blackleg crown canker.

There is a strong relationship between the earlier onset of flowering and yield loss caused by UCI. Canola plants are particularly susceptible to stress during the early stages of flowering (Kirkegaard et al. 2018). Evidence from controlled environment and field experiments indicates that plants infected by blackleg on the upper main stems and branches during the early flowering period results in the greatest reduction of grain yield compared to crops that flower later or are infected at later growth stages. Yield loss can be due to a reduction in seed size, seeds/pod and/or pods/m2. Oil content can also be reduced. In most regions, mid-May to early August is the most conducive period for blackleg infection. By delaying the commencement of canola flowering to early August, growers may be able to avoid severe UCI infections.

If UCI occurs, it has been shown that sclerotinia fungicides will also reduce UCI severity and yield losses. Application of Prosaro®/Aviator® Xpro for sclerotinia control around 30% bloom can also provide protection from blackleg infection during early flowering. The 30% bloom spray may control flower, peduncle, stem and branch infections but is unlikely to provide pod protection. High levels of pod infection tend to occur in seasons with frequent late rainfall events (such as 2016) or where there is physical damage to the pods, e.g. hail (such as 2018).

’Minor’ diseases – to spray or not to spray?

White leaf spot (WLS) is a very common disease of canola that occurs on the leaves of seedlings but can spread up the canopy if wet conditions prevail. Infection reduces leaf area which may cause reduced biomass accumulation and consequently reduce yield. There is no evidence that there is any cultivar resistance to white leaf spot in Australian commercial canola cultivars. There is no data available on yield losses from WLS.

WLS is a sporadic stubble-borne disease so it is likely to be more prevalent and severe in areas with intensive canola production. The issue for advisers is that there is no knowledge on how to predict if WLS will occur as there has been no work carried out on epidemiology. Therefore, use past infestations as a reference and monitor crops at the 4-6 leaf stage prior to considering control options. If lesions are present and wet weather is forecast, it is likely that WLS will continue to flourish. If no (or few) lesions are present and the weather is forecast to be dry, it is highly unlikely that new leaves will become infected.

Powdery mildew may be becoming more prevalent or it may be ’frequency illusion’, that is, once you start looking, you see it everywhere. Powdery mildew occurs typically post flowering and will affect all plant parts. It is a white powder covering the plant parts. There is limited data available regarding if powdery mildew causes any yield loss and very limited epidemiology data to determine which situations may increase the risk of the disease occurring. In northern NSW, this disease occurs regularly and is thought to reduce yield in some seasons. Powdery mildew on brassicas (including canola) is caused by the fungus Erysiphe cruciferarum and first appears as small whitish patches on the upper and lower surfaces of leaves. These spots consist of mycelia and conidia (spores), which allow the fungus to spread rapidly. The fungal patches spread under favourable conditions and form a dense white layer that resembles talcum powder. Disease outbreaks appear to be associated with dry conditions, moderate temperatures, low relative humidity and minimal rainfall. The fungus survives mainly on alternate brassica weed hosts but is also known to survive within old canola stubble.

Pathogens that do not require fungicide control

Downy mildew is often prevalent causing premature senescence of cotyledons and early true leaves. Generally, plants grow through the infection, although seedling vigour can be reduced. There is no knowledge on yield loss, but loss of vigour in canola seedlings is definitely not desirable. No fungicides are registered for downy mildew control in canola and there are no observations of control from blackleg fungicide seed treatments or foliar applications.

Alternaria occurs with prolonged wet weather, especially post-flowering. Alternaria pod spot can result in premature shattering resulting in yield losses. Seed retained and planted from infected crops may cause seedling blight as the disease is carried on the seed. It is recommended to only retain seed from crops unaffected by alternaria. Seed treated with fluquinconazole for blackleg control has also resulted in suppression of alternaria seedling blight. There are no fungicides registered for alternaria control in Australia and no observations that fungicides applied to control sclerotinia stem rot during flowering control alternaria pod spot. It is not known if flutriafol or SDHI seed treatments will control alternaria seedling blight.

The development of fungicide resistance to blackleg in Australia highlights the importance of fungicide use stewardship. Overseas experience informs us that the new SDHI fungicides are more likely to develop resistance than the current DMI fungicides.

If you would like your 2018 canola (2019 stubble) screened for fungicide resistance, we will require 30 pieces of canola stubble from your 2018 paddock. Please email Angela Van de Wouw at angela@grainspathology.com.au for stubble collection protocol. We will provide you with fungicide resistance results for the current DMI blackleg fungicides and the new SDHIs. The service is free to growers and advisers. Costs are covered by an Australian Research Council (ARC)/industry investment.

The research undertaken as part of this project has been made possible by the significant contributions of growers through both trial cooperation and the support of the GRDC, the author would like to thank them for their continued support.