Soil acidification currently affects more than two million hectares of agricultural land in SA and is expected to increase to 4 to 5 million hectares over the next few decades. Soil acidity is emerging in previously unaffected areas throughout much of the low to medium rainfall cropping areas on historically neutral soils, sometimes with alkaline subsoils, and on clayed land in the South East. This is having a considerable effect on crop and pasture growth. Department for Environment and Water (DEW) (2017) estimates that soil acidity causes $88 million per year of lost production in SA.

The rate of acidification has increased due to the high use of nitrogen (N) fertiliser and increased cropping/hay intensity and yields (Moore, G.A., 2001; Nolan, N.S. and Healey, M.J., 2003). Acidification of sub-surface (10-20cm) soil layers has increased in the more traditional acid areas and is more difficult to diagnose and treat.

The GRDC soil acidity project RSS00010 delivered several components to improve the awareness and treatment of acid soils across SA. These included identifying barriers to lime use, research needs, the establishment of a state acidity committee, the development of various decision support tools, various training and awareness activities with growers and agribusiness, support to various regional projects and trials, and establishing a soil acidity website with key information and tools. Other GRDC projects are examining sub-surface acidity treatments with a site at Koppio and various sites examining tolerance of pulses and rhizobia to acidity (R. Ballard, SARDI).

The state acidity map highlighting current and future areas with soil acidity is shown in Figure 1. This map highlights components of land systems which are vulnerable even in lower rainfall districts where many sandy soils are poorly buffered against acidity. During the GRDC project, lime use increased by approximately 50% in SA, however it was estimated that this is still well below amounts needed to correct current acidification rates. Hence, if lime applications remain at present levels, the area affected by soil acidity in SA is expected to double over the next few decades.

Lime use has been increasing since 2007, from 78,000 tonnes to approximately 168,000 tonnes state wide, with large increases on Eyre Peninsula, the Mid North and Kangaroo Island associated with increased cropping. Even so, there is a considerable backlog or lime deficit and rates need to increase.

The Tungkillo trial site was deep loamy sand over clay and 3t/ha and 6t/ha lime was topdressed in a no-till system. The site was worked to approximately 8cm in its third year. There were good lime responses in year 2 and year 4, but no response under lupins in year 3. 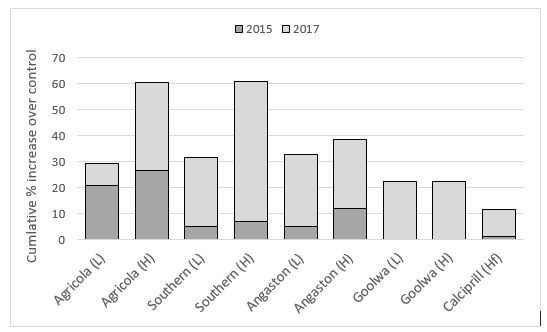 Figure 2. Lime responses as cumulative % increase over control at Tungkillo, barley 2015 and wheat 2017.

The Wirrabara trial which was also under a no-till system showed limited lime response in years 2 to 4. The site was on a sandy-loam over clay, lime treatments rates were corrected for neutralising value to the equivalent of 3t/ha and 6t/ha at 100% total neutralising value (TNV). A sulphur treatment at 1t/ha was applied (elemental sulphur) to determine the effects of increased acidification. In 2018 the control had a pH of 4.3 (CaCl2) and the sulphur treatment had a pH of 4.0 (CaCl2).

Key findings from the Wirrabara trial: 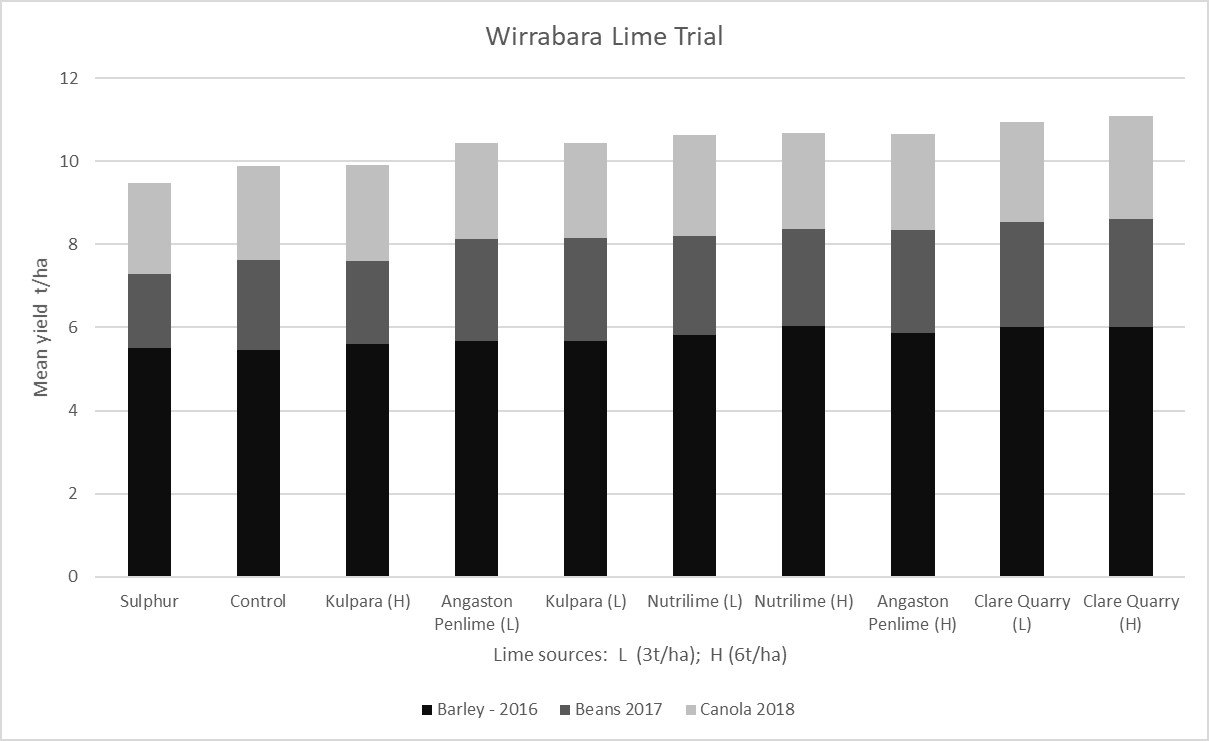 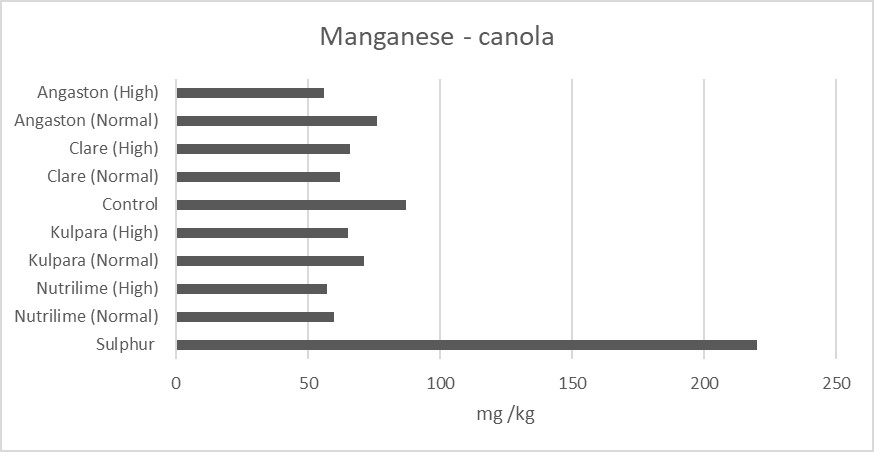 Figure 4. Plant manganese levels in canola at Wirrabara lime trial in 2018. Levels > 300 and > 530 mg/kg are considered high and toxic, respectively.

Many soils in SA have issues with aluminium toxicity when they acidify. Manganese toxicity, while observed in the eastern states, is not common in SA. In the Wirrabara trial in 2018, the canola plant manganese levels observed under the ‘sulphur’ treatment were considerably higher than the other treatments. Manganese toxicity has also been observed in lucerne at Marrabel. (R. Merry, CSIRO)

A review of the likely extent of manganese toxicity was undertaken on older soil and plant databases from a SA perspective. Few occurrences of high levels of soil or plant manganese levels were found, indicating toxicity will only be observed on an occasional basis. Higher levels of manganese are more common on the loamier soils in the Mid North and the issue is exacerbated by warm wet conditions which releases manganese into available forms. Sandy soils are unlikely to have manganese issues as levels recorded are very low.

Three tools based on excel are available on the soil acidity website.

1.Lime Cheque – This estimates lime application rates for acidic soils and compares the costs of lime from different suppliers. Inputs required include lime costs, freight, spreading charge, actual and target pH and lime quality information. It can also use for Neutralising Value (NV), purity or for Effective Neutralising Value (ENV) and fineness.
2.Maintenance Lime Rate calculator – This estimates the lime required to counteract the annual acidification of the surface soil layer, based on product removal, fertiliser inputs, soil and leaching impacts and legumes. It can be used on a paddock basis.
3.Acid cost – This estimates the losses in production for a farm business caused by acidic soils using all available trials with lime response data by pH. Inputs include current pH, crop type and $/tonne.

Many of our current lime recommendation are based on trials conducted many years ago under old cropping systems where tillage and incorporation of lime were common. In the absence of tillage, topdressed lime moves slowly into the subsurface layers, and acidification below 5-10cm is possible, even though lime was applied to the surface. This type of pH stratification results in an acid layer that restricts root growth and crop yields, especially for sensitive crops like pulses – the so called ‘acid throttle’.

Investigations were carried out on six no-till sites that had a history of lime application to examine pH stratification under modern farming systems. The mean pH of four of the sites by depth is shown in Table 1 and indicates occurrence of this issue.

This type of stratification can be solved by strategically incorporating lime, but this becomes costly the deeper the ‘acid throttle’. Experience from other states suggests that the topsoil pH needs to be kept above 5.5 to encourage lime to move deeper into the soil. Other techniques currently being examined to overcome sub-surface acidity include: the rate and type of lime; mixing lime with other products (e.g. gypsum, composts/manure); more soluble alkaline material such as silicates, calcium nitrate; and possibly biological methods to improve incorporation.

Emerging acidity develops gradually and until it becomes a serious issue it is usually difficult to recognise based on crop symptoms. By the time crop symptoms are visible, production has already been compromised for several years. Sensitive crops like lentils and canola will be the first to show patchy growth with areas of low vigour, short fat roots, poor phosphorus uptake and poor nodulation in legumes.

A regular soil testing program where the top soil of each paddock is tested every 3-5 years is the best approach. These samples can also help to monitor soil nutrients and fertiliser recommendations. Acidity is often patchy across a paddock so it is important to take separate soil samples, focussing on areas where crop growth and yields are best and worst. Lime is generally recommended where the topsoil pH measured in calcium chloride is less than 5.2- the aim is to keep the 0-10cm layer at 5.5 or greater and the 10-20cm at 5.0 or greater.

It is important to test paddocks which are vulnerable to pH stratification after liming (no till, limed at normal rates – 2-3t/ha) to review effectiveness of the application and to monitor subsoil acidity. Soil sampling at 0-5, 5-10 and 10-20cm is suggested to examine the pH profile. (and 20-30cm if a deep topsoil) Although this increases the number of soil tests considerably, these samples can also be used to measure available soil moisture and N where required. Field pH kits available from hardware shops can be used to assess pH stratification by depth.

Latest strategies for managing soil acidification include the ability to:

The research undertaken as part of this project is made possible by the significant contributions of growers through both trial cooperation and the support of the GRDC; the authors would like to thank them for their continued support. Additional projects funded through the Department for Environment and Water, National Landcare Program and several NRMB’s provided funding to various components. In addition some information provided here has been produced by these organisations.