The physiology and genetics of cold temperatures in chickpeas – what do we know and where is the research heading?

Chickpeas are well adapted to the northern cropping region in Australia and provide a valuable, economically sound, broadleaf rotation in our farming systems. However, various biotic and abiotic factors cause actual yields to fall between 1.7–2.7 t/ha below potential yield across the region (Yield Gap Australia, 2018). Cold temperatures during the flowering window can significantly reduce crop yield through delaying and interrupting pod set, causing loss of early pods. In 2016, agronomists estimated yield losses due to cool spring temperatures in north-west NSW ranged from 0.5–0.7 t/ha. Chickpeas can suffer damage during the flowering window from both frosts, when temperatures fall below -1.5oC, and “chilling” where average day temperature does not exceed 15oC. In this paper, we will focus on chilling temperatures and their impacts on flowering and podding.

While cool spring temperatures have been historically avoided through late sowing, changes to our farming systems mean there is a greater need for flexibility to sow chickpeas earlier to increase subsequent cropping options and to avoid heat and terminal drought at the end of the season. This however, pushes the flowering window to coincide with cooler ambient temperatures. In north west NSW (Tamworth region), average daily temperatures are not consistently above 15oC until late September and in the cool 2016 season, average temperatures remained below the critical temperature until late October (Figure 1). In addition, short bursts of cool temperatures occurring weeks after temperatures have begun to rise can interrupt pod and seed set even in areas that generally experience warm spring temperatures.

This paper outlines current knowledge of chickpea’s physiological response to cool temperatures during flowering and what opportunities and challenges exist for improving chilling tolerance through breeding and variety selection. 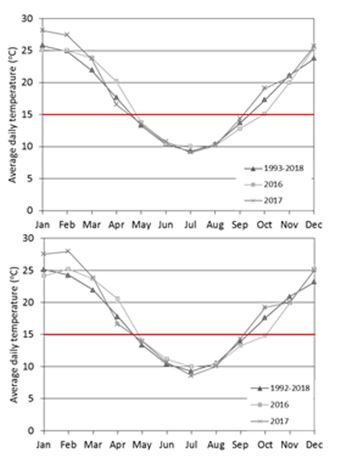 The story so far

While chickpeas may continue flowering under cool conditions, most flowers are subsequently aborted rather than producing pods. In their work with early sown chickpea in Western Australia, Siddique and Sedgley (1986) found only 38% of flowers carried through to produce harvestable pods among early sown plants, compared to 83% in later sowings. This difference was largely due to flower abortion at low temperature – up to 800 flowers/m2 were aborted when average daily temperature was below 15oC, but no flower abortion occurred once temperature rose above this critical value (Table 1).

On the small scale…

Cool temperatures reduce pollen vigour and ovary and style size of chickpea flowers, alterations that have been implicated in reduced flower fertilisation and increased flower abortion (Srinivasan et al., 1999). Pollen development and function is affected by cool temperature from the early stages of pollen production from 9 days before anthesis through to pollen tube growth and ovary fertilisation (Figure2). Cold spells during key points in pollen development at either 9 or 4–6 days prior to anthesis can reduce pod set by 30–60% in susceptible varieties (Clarke & Siddique, 2004). Cool temperature may also decrease the quantity of pollen reaching the flower stigma due to reduced pollen release from anthers as well as a reduction in ovary and style size (Srinivasan et al., 1999). The resulting mismatch increases the difficulty of pollen transfer from anther to stigma (Srinivasan et al., 1999). Once pollen reaches the stigma, pollen germination can be reduced by 30% in susceptible varieties, although some susceptible varieties exhibit normal pollen germination (Clarke & Siddique, 2004; Srinivasan et al., 1999).

Once pollen has germinated on the stigma, pollen tube growth is particularly sensitive to cool temperatures. As a result, far fewer pollen tubes reach the ovary for fertilisation. Srinivasan et al. (1999) found while 100% of flowers at an average temperature of 20oC had pollen tubes reach the base of the style, as few as 23.5% of flowers at 10oC had more than 10 fully grown pollen tubes 1 day after flower opening. This resulted in fertilization of as few as 8% of flower ovules. In highly susceptible varieties, no pollen tubes will reach the ovary within 24 hours of pollen germination under cool conditions (Clarke & Siddique, 2004). As average day temperature increases from 5oC to 25oC, rate of pollen tube growth increases exponentially with only marginal increases in growth rate between 5–15oC (Srinivasan et al., 1999). Knowledge about these specific impacts of cool temperatures on chickpea reproduction have led to development of breeding practices such as pollen selection (Clarke et al., 2004) that are better able to target chilling tolerance. 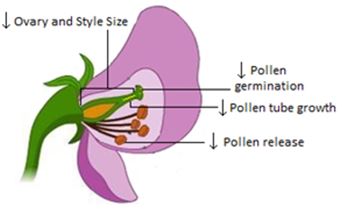 While cool temperature during flowering is a relatively new issue for the northern region, it has been identified as yield limiting across southern and western Australia since the early introduction of the crop. As a result, significant work has been conducted in Western Australia to develop chilling tolerant material for breeding programs. Clarke et al. (2004) developed two chilling tolerant cultivars, Rupali and Sonali, that could produce pods at 10–12oC and as result pod 20–27 days earlier than existing Western Australian varieties. However, these cultivars have insufficient disease resistance and do not yield comparably to the best yielding varieties in the northern region (K.Hobson, pers comm). In addition, time from flowering to podding can range from 30–70 days at temperatures ranging from 10–12oC (Berger et al., 2005). While not suited to northern environments, both Rupali and Sonali have been included in the northern breeding program since 2011 in an attempt to produce well adapted varieties with the ability to set pods at lower ambient temperature. However, the chilling tolerance during flowering and early pod set of progeny derived from either Rupali or Sonali has been insufficient to confer a significant improvement in the ability to set pods early under cool temperatures.

Limited genetic variation within domesticated chickpea restricts further progress in producing cultivars capable of podding at low temperature. However, some wild relatives of chickpea show considerably greater chilling tolerance and are able to set pods within 20 days of the beginning of flowering under cool temperatures, compared to the best chickpea cultivar doing so at 30 days (Berger et al., 2005). While chickpea pod production is reduced by 3–5 times when plants are kept at an average temperature of 10oC compared to 19oC, one particularly promising accession of Cicer echinospermum showed no reduction in pod set, setting more than 6 times the number of pods compared to chickpea at the lower temperature (Berger et al., 2012). There is, therefore, potential to include hybrids between chickpea and its wild relatives in breeding programs to make faster progress towards varieties that produce pods and seeds under suboptimal temperatures.

Where are we now?

Current research aims to identify useful sources of tolerance to suboptimal temperatures that can be used in breeding programs to improve future varieties. In Western Australia, both collections of chickpea and wild relatives are being screened by researchers at CSIRO as potential new sources for chilling tolerance during the early reproductive phase. Since current methods for identifying chilling tolerant chickpea lines is an expensive and labour-intensive process, several projects are working on developing tools to streamline identification of chilling tolerant breeding lines. At the University of Western Australia, Dr J Croser and her team are working to improve controlled environment screening for chilling tolerance amongst a wide set of chickpea genotypes. The underlying genetics of early flowering and chilling tolerance in chickpea during flowering is being investigated by NSW DPI at Wagga Wagga and Tamworth to improve knowledge about genetic control of early flowering and podset to potentially work towards developing genetic markers.  This project uses a set of recombinant inbred lines formed from hybridisation between domestic chickpea and the wild relative Cicer echinospermum which were observed to flower and pod comparatively early in 2016.

In northern and southern NSW, current varieties and elite breeding lines are being assessed for flowering and pod set characteristics under cool spring temperatures through manipulation of sowing date. The aim of this work is to; quantify yield loss from cool temperatures during flowering in the northern and southern NSW regions, expand knowledge of drivers that may improve chilling tolerance, and identify future breeding directions. In 2018, field trials were conducted to benchmark current varieties and identify breeding lines with potential superior chilling tolerance when compared to existing varieties in northern environments. Data collected from the 2018 season is currently being processed for analysis.

The research undertaken as part of this project is made possible by the significant contributions of growers through the support of the GRDC, the authors would like to thank them for their continued support.

The authors would like to thank Helene Davidson and Jessica Simpson for their assistance with data collection and trial management at the Tamworth and Wagga Wagga field sites in the 2018 chilling tolerance work.