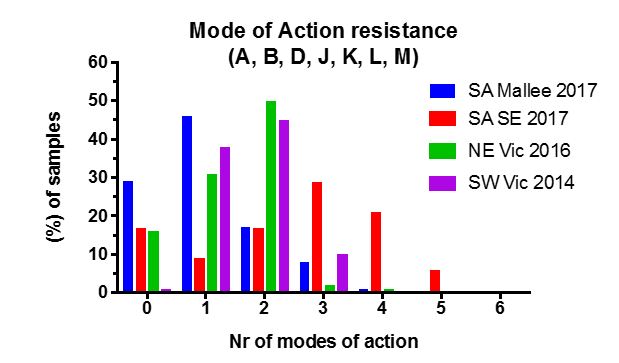 The GRDC has supported the University of Adelaide’s weeds group since 2005 to conduct annual weed surveys across three regions of Victoria. The methodology involves randomly selecting 150–200 paddocks and collecting weed seeds prior to harvest. Reasons for the presence of plants at the end of the season could include: (1) Resistant plants that have survived herbicides, (2) Germination occurred post-herbicide application, (3) Sub-lethal effects due to shading or poor herbicide/adjuvant choice/poor application equipment, and (4) Reduced herbicide uptake due to plant stress or (5) a combination of points 1 to 4. Testing using pot trials under optimum spraying conditions (accurate herbicide application on non-stressed weeds at correct timings) is conducted the following season under outdoor winter conditions. These studies are aimed at identifying the incidence and changes in resistance mechanisms at 5-year intervals in addition to monitoring for resistance to recently registered herbicides. The results are expressed as the percentage of paddocks containing resistant ryegrass as determined by a pot test and where survival in that pot test was ³20% (Tables 1 and 2).

Table 1. Percentage of paddocks containing herbicide resistant ryegrass in Victoria to post-emergent herbicides. Paddocks were scored as resistant if the seeds collected exhibited ³20% survival in a pot test conducted the following winter. Samples that exhibited <20% survival were not classed as resistant. Letters below the herbicide name represent the MoA labelling.

For each herbicide, recommended field rates plus recommended adjuvants (if required) were used.

Clethodim (Select®) is arguably the most important herbicide in break crops. The incidence of resistance to 500ml/ha clethodim in the pot trials under winter conditions on non-stressed ryegrass was below 5% in the Victorian samples. To put this into perspective, the incidence of glyphosate resistance was similar to clethodim. However, frequently during the growing season, there are reports of poor control with clethodim. This discrepancy of reduced performance with clethodim is, therefore, likely to be due to other factors such as environmental stress reducing herbicide performance.

Table 2. Percentage of paddocks containing herbicide resistant ryegrass in Victoria to pre-emergent herbicides. Paddocks were scored as resistant if the seeds collected exhibited ³20% survival in a pot test conducted the following autumn-winter. Samples that exhibited <20% survival were not classed as resistant. Letters below the herbicide name represent the MoA labelling.

For each herbicide, recommended field rates were used.

Several herbicides, most which have MoAs that differ to currently registered herbicides (Groups E, Q, R), are in development (Table 3). The Group K herbicide Devrinol-C® (napropamide) belongs to a unique chemical class (acetamides) different to other Group K herbicides. Devrinol-C® has been registered for the 2019 growing season, whereas the registration for the other three herbicides (bixlozone, cinmethylin and carbetamide) is pending. The herbicides in Table 3 are all pre-emergent herbicides and selective in a variety of crops. Trials have shown that in addition to other weed species, these herbicides control some alphabet resistant ryegrass. If used as part of an integrated weed control strategy, these alternative MoA herbicides are likely to reduce selection pressure on any one MoA.

Table 3. Summary of new herbicides expected for registration by 2020.

*registration in November 2018
? Under investigation