Weed control in Australian grain production systems, now and into the future

With many annual weeds in Australian cropping systems retaining their seed at maturity, harvest weed seed control (HWSC) is an alternative approach that is now widely adopted by Australian grain growers (Walsh et al., 2017). Several similar effective HWSC systems have been developed to suit a range of crop production practices. (Walsh et al., 2013). Chaff lining and chaff tramlining have recently become very popular with growers due to the low cost and simplistic approach of these systems to target weed seeds at harvest. These approaches to HWSC concentrate the weed seed bearing chaff fraction into very narrow windrows (<30cm) directly behind the harvester or onto dedicated wheel tracks. The chaff environment is sub-optimal for seedling establishment and this practice can be as effective as other forms of HWSC in depleting weed seed banks.

Physical and thermal weed control techniques were in use well before herbicides were introduced and the development of new options has continued throughout the herbicide era. However, most of these technologies have not been adopted, primarily due to cost, speed of operation and fit with new farming systems. The introduction of weed detection and actuation technologies creates the opportunity to target individual weeds i.e. site-specific weed management. This greatly increases the potential cost-effectiveness of many directional physical weed control techniques in conservation cropping systems.

The use of alternative weed control tactics is obviously critical to achieving near zero weed status, but ultimately successful growers keep seed bank numbers low every year through the strategic use of all the tools available. This stems from a commitment by the grower and their agronomist to plan ahead and target weeds at every opportunity using an integrated approach, not just with herbicides alone. There are numerous benefits of near zero weed densities including reduced weed control costs, prevention/delayed herbicide resistance evolution and increased flexibility in production practices. Significantly, lower weed densities create the opportunity for using cheaper and more accurate site-specific approaches to weed control.

The purpose of the experiments is to investigate the influence of different amounts of wheat, barley, canola and lupins on seedling emergence of annual ryegrass. These pot trials were run at 3 locations: Toowoomba, Wagga Wagga and Narrabri. The similar approach used at each location involved eight rates of chaff with four replicates of each experimental unit. The trials were established by spreading a known number of annual ryegrass seed (100 or 200) on the soil surface potting mix filled trays or pots. Treatments were established by spreading chaff material, collected during 2017 harvest, over the surface of the pots or trays. Chaff amounts used (0, 3, 6, 12, 18, 24, 30, and 42 t/ha) were calculated as amounts equivalent to those concentrated in a 30 cm wide row during the harvest of 0, 0.25, 0.5, 1, 1.5, 2, 2.5 and 3.5 t/ha yielding wheat crops using a 12m front. Once the chaff was evenly spread across the soil surface, the pots were watered thoroughly and maintained at or near field capacity for 28 days.

Differences between chaff types and rates were assessed using emergence over the 28 day period as a proportion of the 0 t/ha chaff treatment. Figure 1. Influence of increasing amounts of wheat chaff on the emergence of annual ryegrass in pot trials conducted at three locations. Means with same letter are not significantly (P=0.05.)

Barley chaff was generally more suppressive of annual ryegrass emergence at equivalent rates of wheat, canola and lupins. When these four chaff types were compared in a single study at Wagga Wagga, there was generally lower annual ryegrass emergence through barley chaff, however these values were only significantly lower (P<0.05) at the highest chaff rates (30 and 42 t/ha) (Figure 2). 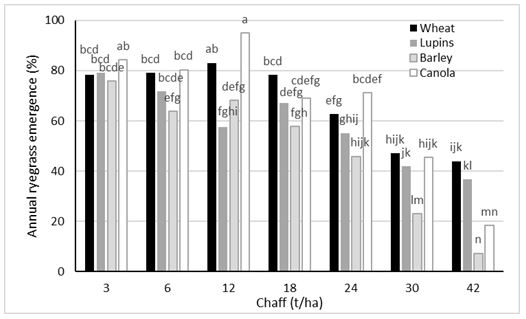 Figure 2. Influence of increasing amounts of wheat, barley, lupin and canola chaff on the emergence of annual ryegrass in pot trials conducted at Wagga Wagga, NSW. Means with same letter are not significantly different (P=0.05).

The greater emergence inhibition by the barley chaff at Wagga may be due to it being a greater physical barrier.  For any weight of chaff, more barley chaff was needed than wheat chaff, with lupins and canola requiring less.  It is also unlikely that all crop species and/or varieties will have the same chaff percentage. Additionally, a harvester using a stripper front will produce less chaff (Figure 3) for a chaff line than one with a draper front. Diverse weed control – the need for both herbicide & cultural tactics

Growers and agronomists now have a wide range of cultural tools to manage herbicide resistant weeds without compromising profit. Tactics such as HWSC, crop competition and diverse rotations are used to complement herbicide options including double knock strategies, pre-emergent herbicides and late season crop-topping. Known as the ‘big six’, these diverse weed management tactics are used in conjunction with best practice agronomy to drive weed seedbank numbers to zero.

In addition, a random survey of 64 paddocks in the south-east of South Australia found populations of annual ryegrass with multiple cross resistance to a range of pre-emergent herbicides including Arcade (prosulfocarb), Butisan® (metaxachlor) and Sakura ® (pyroxasulfone).

These findings by the University of Adelaide have huge implications for an industry now heavily dependent on pre-emergent herbicides in no-till systems, showing they can quickly break down in the face of metabolic cross-resistance. The diverse tactics outlined in the ‘big six’ are more important than ever to prevent seed set in resistant weed populations and to protect the longevity of pre-emergent herbicides for future use.

Research has shown that stacking of the ‘big 6’ tactics can have a far greater impact on preventing weed seed set than using them in isolation. Walsh et al. (2018) highlighted that seed capture for HWSC was enhanced when combined with crop competition. A survey of 71 wheat crops across Australia showed that the more competitive crops caused ryegrass to grow upright (seeking out light) and set seed higher in the crop canopy, where a greater proportion can be captured through HWSC.

The survey found that in an average wheat crop with a biomass of 9t/ha, 74% of the ryegrass seed was retained above 10cm in the canopy. However, there was a 12% difference in ryegrass seed above 10cm between low and high biomass crops (<7t/ha and >12t/ha respectively) due to differences in crop competition. Narrow row spacing, vigorous cultivars and/or higher plant densities all contribute to crop competition and are already recognised for reducing weed seed set and improving crop yield.  This data shows the impact they can also have on improving the success of HWSC.

HWSC is becoming recognised as one of the key tactics for managing herbicide resistant weeds with growers shifting to make the practice more mainstream. Narrow windrow burning (NWB) has long held the mantle as the most popular form of HWSC, but chaff lining and chaff tramlining (or chaff decks) are rapidly gaining favour. An online survey by WeedSmart of 269 growers at harvest 2017 indicated 32% of growers were planning to use NWB, with 27% chaff lining and 12% using chaff decks. Chaff carts were stable at 12%, mill (seed destruction) technology at 3%, with 14% indicating they would not use HWSC.

The increase in adoption of chaff lining and chaff decks seems largely due to the ability to retain stubble instead of burning rows or chaff dumps. The principle involves collecting chaff and weed seeds off the main sieve to drop in a single row or split onto three metre tramlines, with RTK allowing rows to accumulate in the same area each year. Weed seeds remain on the surface where they can be grazed or left to rot, while straw is chopped and spread. A reduction in dust from the tracks when summer spraying is a huge benefit of the chaff deck system for growers in controlled traffic farming systems (CTF).

With any new practice there have been challenges and these have occurred either at harvest or the following season dealing with rows of dense chaff and weeds. Harvest issues have primarily involved header blockages or dust accumulation around the engine bay. Modifications with baffle and chute setup have helped minimise issues but with so many different makes of header, growers have had to sort many of the problems in the paddock.

Dealing with chaff rows the following season has also created issues, particularly as growers aim to promote rotting of weed seeds while also allowing crop rows to establish and compete in the chaff line. Sowing the chaff line with a disc unit is generally preferred, along with increasing herbicide rates of pre- and post-emergent herbicides over the chaff rows. Growers and their agronomists need to be aware that weed numbers can be confronting during the early years of chaff lining or chaff decks in high pressure blocks. Remember that weed seeds will be captured in following seasons and placed back on the same rows so that weed numbers and selection pressure are confined rather than spread across the paddock.

Controlling high numbers of weeds in chaff rows using selective or shielded sprayers is an option in dense populations and is well suited to CTF systems. Growers can target dense populations of weeds on tramlines while only spraying a small percentage of the paddock, e.g. two 700mm tramlines (or 1.4 metres every 12 metres) only represents 12% of the paddock. Any survivors are again picked up at harvest and put back onto the chaff rows for further treatment or rotting the following year.

Mill technology remains the ultimate form of HWSC and complements all forms of weed control. With the mill pulverising all material leaving the sieves, it eliminates the need for burning or leaving weed seeds to rot. Mills can destroy 93-99% of the weed seeds while spreading residue back onto the paddock without any loss of nutrients or stubble. A higher capital investment is required with mills compared to other HWSC practices, with costs ranging from $85,000 to $180,000 depending on mechanical or hydraulic drive options.

The 2018 harvest has generally been a successful season for the different types of mills available. The hydraulic iHSD operates as two hydraulically driven cage mills, while the Seed Terminator uses a mechanically driven multi stage hammer mill. A number of concerns with the mills and their performance have been addressed by the manufacturers following an extensive review process in 2018. Issues included excessive mill wear in sandy soils, reductions in harvest capacity and high running costs.

A new vertical iHSD mill was also released for the 2018 harvest by McIntosh and Son and the de Bruin Group. This is a mechanical drive mill with several key features including less cost ($85,000 plus GST and fitting), less moving parts, less fuel usage, less horsepower (compared to the hydraulic iHSD), an auger on the shaft to help minimise blockages, a stone trap to catch any mill destroying objects and the ability to measure harvest losses. Ten machines were running for this harvest with another 100 units sold for the 2019 harvest.

The emergence of annual ryegrass can be significantly suppressed by with increasing amounts of chaff concentrated in chaff lines and chaff tramlines. It was only at very high rates of wheat (42 t/ha) the annual ryegrass emergence was adequately controlled. The different crop species also provided different rates of reduction in emergence although for wheat and barley the relative effectiveness varied between the two locations.

Targeting treatments on individual plants results in significant energy savings and makes previously impractical options on a broadcast basis, available for use on a site-specific basis. The opportunities here are immense for the future management of problem weeds.

AHRI - Behind every successful HWSC approach is crop competition