Residual herbicides and sowthistle - length of residual and efficacy. Trials in CQ and Darling Downs

The first population of glyphosate resistant common sowthistle in Australia was confirmed in 2014, in a population from the Liverpool Plains, NSW (Heap, 2019). A recent (2016/17) collection of sowthistle populations from throughout Queensland and NSW is currently being evaluated for susceptibility to glyphosate. Results to date have shown that out of 154 populations tested, 26 have been confirmed resistant to glyphosate (≥20% survival) while another 17 have been identified as developing resistance (11-19% survival). The identified resistant populations are distributed throughout the northern cropping region (Figure 1). A further 59 populations are yet to be tested.

In addition to glyphosate resistance, there are sowthistle populations with resistance to chlorsulfuron (Group B). Also, poor control of sowthistle is achieved with the commonly applied fallow herbicide mixture of glyphosate + 2,4-D, due to antagonism. Alternative tactics for sowthistle control are required. This includes examining the impact of non-chemical approaches such as targeted tillage, growing a competitive crop and cover cropping. However, there are also some potential herbicide-based options for effective fallow weed control which when used in combination with non-chemical approaches could provide effective control of sowthistle.

Figure 2. Factors that influence the persistence, availability and efficacy of residual herbicides (Source: Congreve and Cameron, 2018)

A series of nine fallow field trials were conducted across grain growing regions of Queensland (south-west Queensland, Darling Downs and central Queensland) (Table 1) during summer/autumn 2016/17 to evaluate the efficacy and persistence of a range of residual herbicides for the control of sowthistle in fallow. Sites were selected that had a recent history of sowthistle infestation. Unfortunately, one site (Callandoon) did not have any sowthistle emerge, and two sites (Mt McLaren and Gindie 1) had populations too low to measure significant differences. The site at Jondaryan (1) also had additional treatments of crop residue retained and removed.

Residual herbicides were applied to small plots (ranging in size from 3 x 12m2 to 6 x 20m2) along with two unsprayed controls (Table 2). The herbicides were evaluated in combination with grass weed residual herbicides, as fallow grass weeds were also a target. Herbicides were applied using a quad-bike at 100L/ha of water with an air-inducted course (C) droplet size. Sowthistle emergence counts were made after each flush of emergence, following sufficient rain, and any emerged weeds were sprayed out with a knockdown herbicide so as to avoid double counting.

Table 1. Location of trial sites and other details.

*Stomp Xtra no longer registered, but other products with pendimethalin are available

The efficacy of the residual herbicide treatments was not consistent across sites. However, there were some treatments that provided more consistent, effective suppression of sowthistle emergence (Table 2). Terbyne Xtreme (terbuthylazine) and Valor (flumioxazin) applied alone provided effective control of sowthistle at four out of six trial sites. Mixtures with these two herbicides, also provided good control when Terbyne Xtreme (terbuthylazine) was mixed with Flame (imazapic) (5/6), Balance (isoxaflutole) (4/6) or Stomp Xtra* (pendimethalin) (5/6) and when Valor (flumioxazin) was mixed with Flame (imazapic) (4/6) or Dual® Gold (s-metolachlor) (5/6). Good control was also achieved from a mixture of Flame (imazapic) with Balance (isoxaflutole) (4/6) and with Flame (imazapic) + either Stomp Xtra* (pendimethalin) or Dual® Gold (s-metolachlor) (3/6).

The duration of control differed for the different residual herbicide treatments. For example, at the Yagaburne site, all residual treatments initially provided a significant reduction in sowthistle emergence at 40 days after application (DAA). However, at 187 DAA, efficacy was greatly reduced in all but six of the treatments (Figure 3). The duration of persistence will impact on the efficacy of weed control but can also impact on the potential damage to subsequent susceptible crops. Dry years, such as we have had recently, will generally increase the persistence of many residual herbicides beyond the time frames stated on labels. 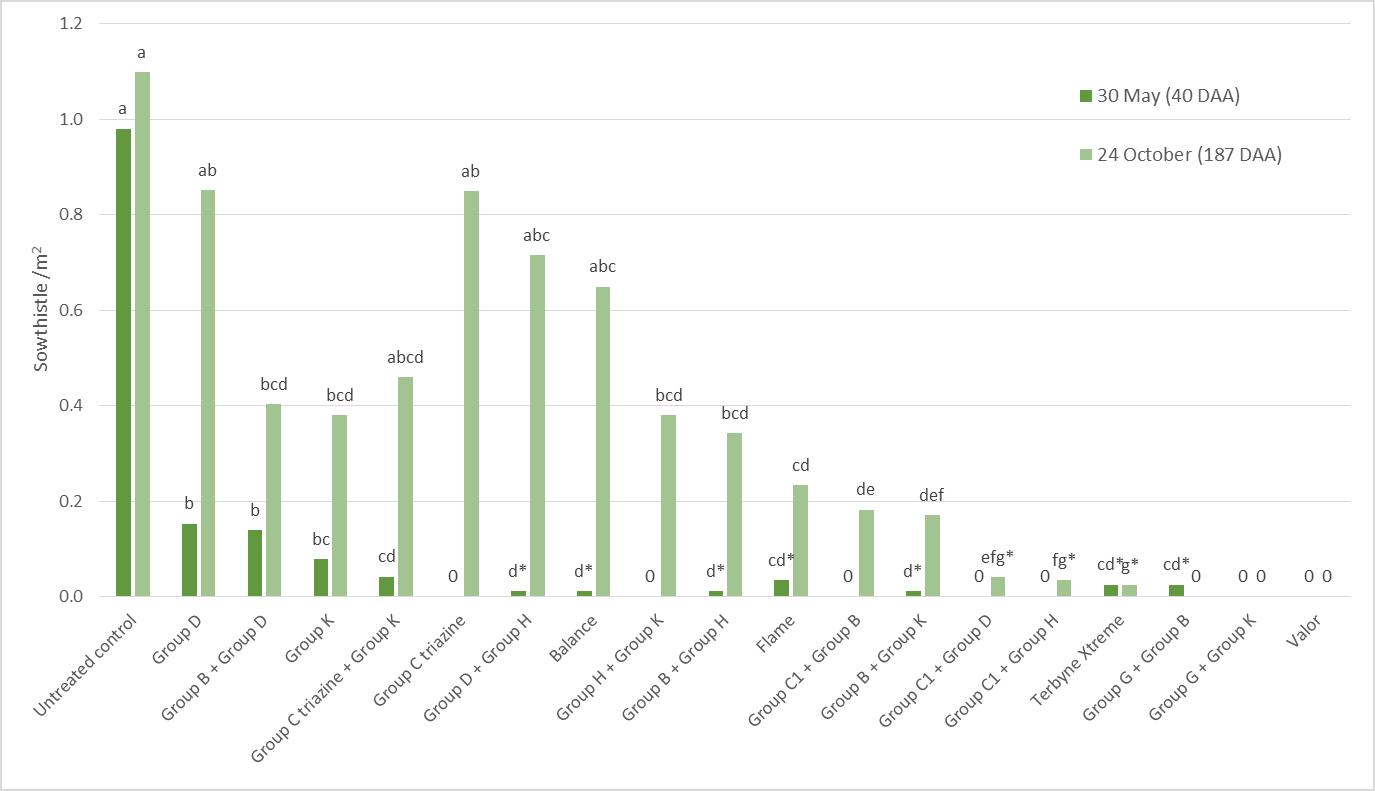 Retaining crop stubble resulted in an increase in the emergence of sowthistle (Figure 4). Sowthistle requires an extended period (three days) of moisture to germinate and it is likely moisture was retained for longer under the crop stubble than in a bare fallow. Stubble did not have any influence on the efficacy of the residual herbicides, with the same trend in control being achieved with or without crop stubble (Figure 4). However, previous research has shown crop residues can intercept large proportions of residual herbicides, stopping them from getting to the soil target. 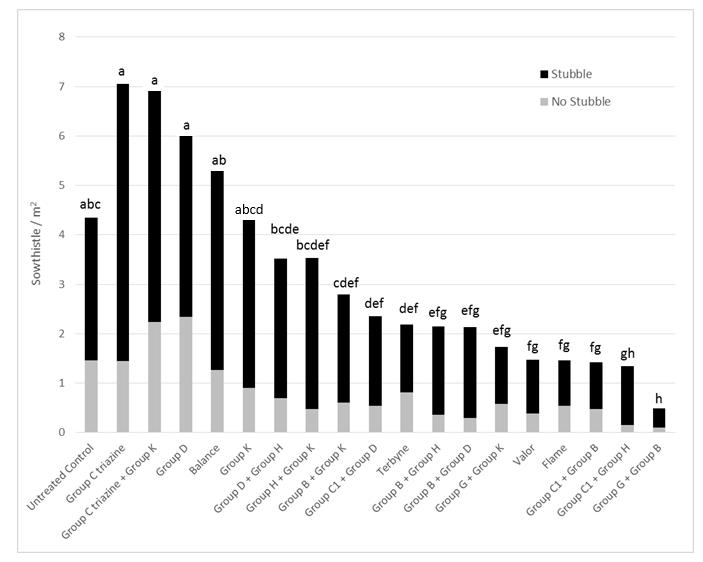 Figure 4. Sowthistle emergence (plants/m2) at Jondaryan (1) following application of residual herbicides in plots with crop stubble and without crop stubble. Counts were made 147 DAA (5 April 2017). Columns with similar letters are not significantly different (P=0.05)

Rotating weed control tactics is a key strategy in the management and prevention of herbicide resistance. Weed management shouldn’t be prescriptive but should consider the environment (soil type, likely rainfall etc.) and future cropping aspirations. As such the results presented in this paper are to help inform decision making and are not a recommendation for weed control.

As residual herbicides can be variable in their efficacy, it is important to use residual herbicides in combination with other weed management tactics. For example, if applying a residual for fallow weed control, make sure any weed escapes are controlled, either with knockdown herbicides, targeted tillage or manual removal. Consider planting a subsequent competitive crop to provide added control.

Many herbicides require moisture to break down. With our recent run of hot, dry seasons, be mindful that some residual herbicides can persist for longer than described on their labels. A test plot of your planned subsequent crop can give you a good idea of whether crop damage is likely to occur. Current research is looking at developing a quick test for testing soils to determine concentration of the herbicide and risk of damage for subsequent susceptible crops.