The war on weeds - latest tips

Resistance to herbicides in the Mallee and Wimmera

The Wimmera and Mallee were last surveyed for herbicide resistance in 2015. For annual ryegrass, resistance to trifluralin, Intervix® and glyphosate had all increased, but there was little resistance to the new pre-emergent herbicides Boxer Gold® and Sakura® (Table 1). Glyphosate resistance was low in both areas but is now common enough to be picked up in our random weed surveys.

Table 1. Extent of herbicide resistance in annual ryegrass collected in random surveys in Wimmera and Mallee in 2015. Populations are considered resistant if there is more than 20% survival.

Table 2. Extent of herbicide resistance in brome grass collected in random surveys in Wimmera and Mallee in 2015. Populations are considered resistant if there is more than 20% survival.

Table 3. Herbicide strategies investigated for the management of brome in lupins, triazine tolerant (TT)-canola, wheat and barley at Balaklava (2014-2016).

*Wheat and barley cultivars are tolerant to imidazolinone herbicides.

The two break crops in the rotation were able to reduce the brome grass seed bank, regardless of the strategy used. However, for cereals the brome grass seed bank was only reduced when Clearfield® crops and Intervix® herbicide were used (Figure 1). Previous research has demonstrated that you need two consecutive years of good control of brome grass to manage this weed species. Back to back break crops (lupins followed by canola) followed by a Clearfield® cereal, reduced brome grass seed production in 2015 to 0. Clearly it is important to use the last remaining Intervix® applications on brome grass in the cereal part of the rotation that follows a break crop to achieve the best long-term result. 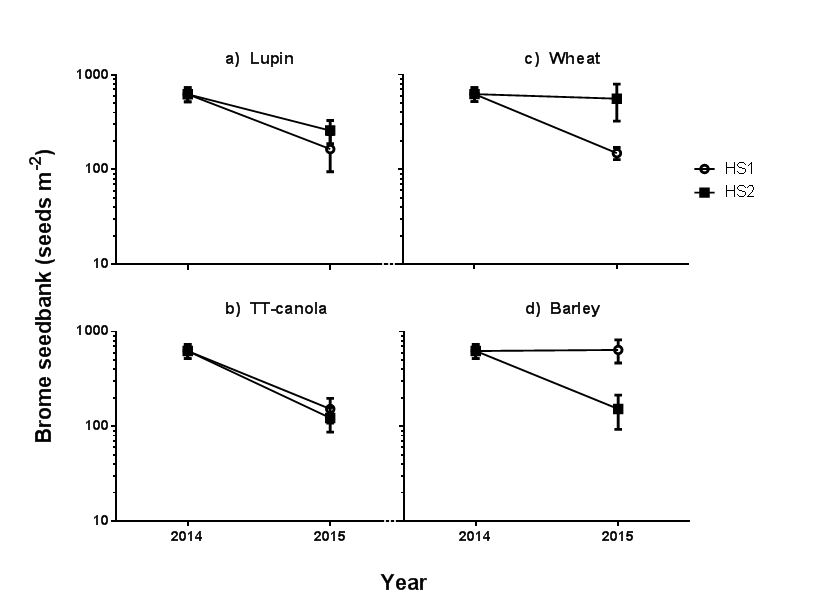 Glyphosate resistant weeds occurring on fence lines and crop margins can cause problems by moving into the cropped areas. Fence lines suffer from having no competition, so any surviving weed has full access to resources and can set a lot of seed. There are several species with glyphosate-resistance that can become problems in this area including annual ryegrass, windmill grass, brome grass and fleabane. Some years ago, research was conducted on the management of glyphosate resistant annual ryegrass on fence lines that led to the registration of Uragan® for this purpose. There are some other options that can be used during spring, but they tend not to work as well (Table 4). One of the problems with controlling all vegetation on fence lines is that they can become open to wind erosion on light soils if they are continually kept bare. Sowing as close as possible to the fence can reduce the amount of soil exposed.

An alternative to Uragan® that has been registered since our work was conducted on annual ryegrass is Terrain®. Terrain® needs to be applied to bare ground and needs 15mm of rain within a few weeks to activate it, consequently autumn or winter applications will be most effective. Terrain® is a good choice where young trees are close to the fence line.

Table 4. Control of glyphosate-resistant annual ryegrass on fence lines with alternative herbicides at Hilltown and Ungarra in 2011.